Far Cry’s lead villains have always been captivating. Presenting a charisma and charm that at times throughout the narrative makes them almost likeable, their veil suddenly drops and this incredibly sinister, heinous creature emerges.

Ubisoft has become a dab-hand at creating these characters, and previous entries have taken place in somewhat realistic but never real settings, helping keep the threat at arm’s length. Far Cry 5 is far more unsettling – because it feels plausible.

Set in the real American state of Montana, Far Cry 5 tells the story of a deranged cult leader, Joseph Seed, who has taken over the fictitious town of Hope County, recruiting members by manipulation or force into the Project at Eden’s Gate. The premise is horrific, not because it’s something you could never imagine, but precisely because it’s entirely feasible, especially in the current global climate. 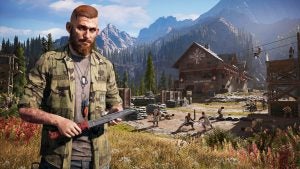 In fact, if our world wasn’t as tumultuous as it currently is, Joseph Seed may never have seen the light of day. I sat down with creative director Dan Hay, who discussed the birth of the cult.

“As a kid I remember thinking about the Cold War, the Soviet Union, America and being terrified. Some people are afraid of different things as a kid, and that’s what I was afraid of.”

Dan discussed how the constant threat of war became a big part of his thought process as a child.

“Then in ’87, ’88 and ’89 when things started to change [towards the end of the Cold War], the anxiety went away. Then later on in life I started to have that feeling again, and I didn’t know if it was because I had kids, or if it was because, as an adult I was more aware of what was going on, but I definitely felt like globally, not specifically in the States but globally, there was a feeling like we was heading towards that chasm again. So when I saw a guy with a sandwich board, and it said ‘the end is nigh’, it was a key moment of thinking ‘that guy’s not crazy’. That was a trigger for Joseph.”

The creation of Joseph Seed is one born from fear. Fear of knowing that something terrible is going to happen, but not knowing when, and being so adamant in this knowledge that you must protect those around you, whether they want you to or not. 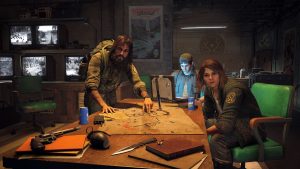 When I got the chance to play the game, I was unsure whether Joseph was a leader who genuinely believed in his gospel, or was a charlatan tricking the population. It’s a distinction that is important to both the story, and Joseph’s performance, as Dan highlights:

“In practical terms, it has to do with what you tell the actor. The actor could give a charlatan performance of ‘you don’t believe what it is’, but if you tell the actor ‘listen, this person absolutely believes it’s going to happen’, it changes everything they do.

“But it begins to be conceivable that the mania and concern over this feeling, that the end of times is coming, would make people behave that way, and what’s chilling about it is that when Greg [Byrk, voice of Joseph Seed] slips into the character of the Father, you can tell his mindset changes.” 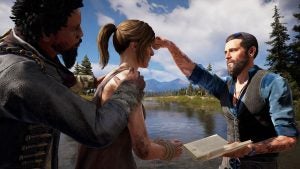 Ubisoft didn’t just rely on its own intuition in the creation of this cult, it called in the help of an expert in the form of Rick Alan Ross, who also discussed the difference between a masterful manipulator and a believer, and the dire consequences of a cult headed by the latter.

“As I began to watch Father and see Joseph Seed talk and interact as the game was being developed, I started to say ‘watching him, is he a believer or is he a cynical manipulator’, and Dan said ‘oh he truly believes’, and in my experience that’s the most dangerous cult leader, because they have no limit.”

In my preview I was particularly glowing about Joseph Seed, his performance in the game’s opening moments is chilling. Joseph is a man so close to the edge you never know if his next words will be a blessing or a screamed curse. It’s clear that having a true believer leading the Project pays dividends in the end product.

For a cult to take over an entire town, kidnap or recruit the vast majority of its people, and avoid all outside influence or resistance from local authorities or government can sound pretty implausible, but that was when Ubisoft asked Rick if what they were creating went too far, and were surprised with Rick’s response.

“We talked a lot about ideas that they had and whether they had historical resonance. So for example the idea of a cult taking over a town, or a cult using drugs to manipulate and control people, the idea of an expansive compound, all of these things were what Dan and his team were thinking ‘well is this real? Has this happened?’ and then I would tell them things that were further out than what they were saying, and they felt they were well within the bounds of reality and history.” 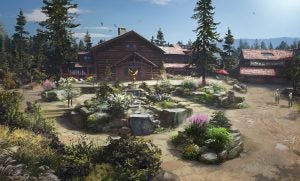 Dan also discusses how the choice of location played a key role in the creating something that’s not too far from the realms of possibility.

“We went to Montana and were thinking ‘how the hell are we going to justify somebody closing this place down?’ and I went to use my phone and it didn’t work, for two days. Couldn’t talk to my wife, couldn’t talk to Ubi, nobody knew where we were, I realised this little thing is providing us with all the information that we need. We’re so reliant on phones for social media, for information, to let people know that we’re alive, that as soon as you take it away, it’s crazy the effect that it has.”

This being a Far Cry game means there’s only so long before the game loosens its grip on the player and you’re let loose in the fields of Hope County. In my preview I noted my disappointment at how the team had created an incredible premise, but then left it behind, but chatting to Dan, it’s clear this approach has always been the team’s vision.

“We could have a super earnest, powerful opening, then a short while afterwards we can have a bombastic, crazy Cheeseburger [the game’s bear ally] go blow stuff up [sequence] and then have you meet somebody who is all about psychological warfare, and in the end you take from it what you want.

“If we give a game that allows you to snack on different things in the cadence of your choice, we have to to be prepared for that to be your experience, and for you to have enjoyed it to the breadth that you wanted to. At the same time I’ve got a character over here that’s amazing, that as a designer I want you to see, but you’re never going to see it.” 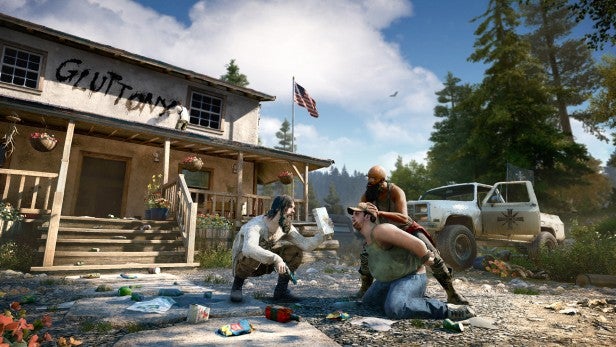 While this autonomy may mean that, for players like myself, the story may not be as prominent as we want, but that does create the potential for some incredible moments built around player choice. In Far Cry 4, you’re likely familiar with the incredible alternate ending that can occur within 20 minutes of booting up the game, achieved simply by obeying Pagan Min’s wish to “stay right here, enjoy the crab rangoon”.

With this in mind, I’ve wondered if there’ll be an opportunity for the player to join the Project at Eden’s Gate, and asked Dan if we can expect a similar swerve in 5.

“Here’s what you can say: I’m smiling. It was a great moment in 4, and what I can tell you is that the spirit of those choices lives on in the game.”