Available on Xbox One (version tested), PS4, PC
With Dying Light, Techland has made the best game of its career. OK, that’s not saying that much for a studio best known for patchy, bug-ridden adolescent zombie apocalypse fantasies (Dead Island) and good but not quite great Western shooters (the Call of Juarez series), but Dying Light is genuinely impressive. Yes, it’s a mish-mash of clichés and smart ideas shamelessly appropriated from other games. Sure, its storyline is uninteresting and it has problems with pacing and flow. Yet there’s a polish here and a coherence of tone that we’ve never seen in Techland’s games before. Dead Island became a sizeable hit despite its numerous faults. Dying Light actually deserves to be one.

Originality is not its strong suit. Like Dead Island and its sequel, it’s a first-person, zombie apocalypse survival sim that’s packed full of scavenging for supplies, crafting offensive weaponry and putting it to good use on the shambling, rotting dead. Structurally and narratively, it owes a lot to the Ubisoft school of open world game design, and particularly Far Cry 2 and Far Cry 3. On top of this, Dying Light adds parkour, with more than a nod to Mirror’s Edge and Assassin’s Creed. Like TequilaWork’s Deadlight, it recognises the zombie’s biggest weakness – it’s lack of acrobatic prowess and speed – and turns it to your advantage. 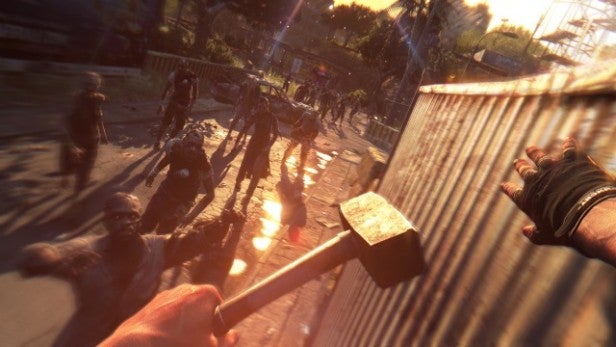 Don’t get too excited about the plot, either. You’re the agent for some shifty global aid organisation, parachuted into Harran, a Turkish city in the grip of a zombie pandemic. Your job is to retrieve mysterious files, and you soon find yourself under cover with an organised group of survivors, working together to maintain some kind of order and keep the few remaining citizens alive. However, you’re also forced get involved with a brutal gang of thugs, led by a psychotic warlord. From its railroaded, no-choice moral choices to its philosophy-spouting nutjobs, Dying Light takes its characterisation and plot twists direct from the Far Cry playbook, and you’ll spend a large chunk of the early game wondering how long your hero will keep taking orders from people who are clearly up to no good. Still, at least we’re spared the downright woeful plotting and slapstick gore of the Dead Island games.

Luckily, Dying Light doesn’t need to rely on innovation or a plot for entertainment, because its mechanics, its world and its minute-to-minute gameplay are more than good enough. We already knew Techland could deliver scrappy, zombie skull-smashing melee combat and fun custom weapons, but who would have thought parkour was their thing? The big surprise is that it’s not just well executed, but seems such a natural part of the action that you wonder how zombie action games have been doing without it for so long.

This isn’t a game of crowd control or man vs zombie horde splatter. Take on more than a handful of brain-hungry biters at once and you’ll soon be overwhelmed. Your hero starts off weak and takes a while to become much of a badass, and you’re constrained by a stamina gauge that runs out of puff after a few miserable hits, leaving you tired, slow to attack and worse to defend. Aggressive, upfront assault is not the way to play. 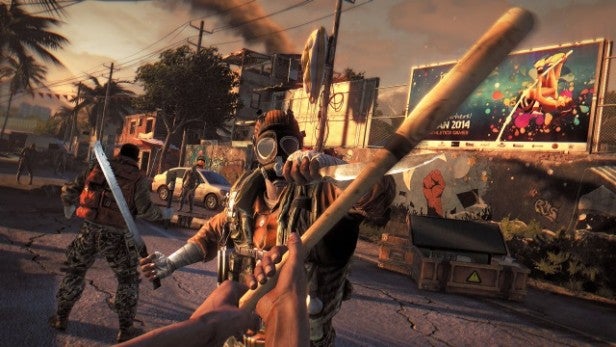 No, this is a game of getting from A to B with speed, grace and daring, using routes above the roofline where you can, and sheer momentum where you can’t. Angling your view towards the next grapple point and tapping the right bumper will grab the ledge in view and pull you up to it, even at speed, or help you jump gaps from a standing or sprinting start. You’ll be surprised just how much of Harran is scalable, and how many routes you can discover from place to place. And while, as in any parkour game, you’ll sometimes fluff your jump or struggle to do what you meant to, the controls work fine 90 per cent of the time and actually get better with practice. For once in a first-person game, parkour is a pleasure.

Harran’s not as scenic as Assassin’s Creed: Unity’s Paris or Far Cry 4’s Kyrat, but it’s the perfect place to spend your time racing over rooftops, clambering up the side of buildings and introducing zombies to a variety of nail-enhanced, electrifying, fire-igniting, explosion-causing weaponry. There are slums, shopping malls, picturesque fishing villages and rocky hillsides for a little diversity, and it’s a place you’re constantly encouraged to explore, both on the streets and inside the accessible buildings. As the game throws in more heavily-armed human areas and tougher forms of zombie, finding crafting materials and cash for new weapons becomes a crucial survival skill. So does acquiring the various controls used to trigger traps or the blueprints needed to construct your own defences. Luring the shambling brutes towards an explosive or electrifying demise with the aid of firecrackers is always a chuckle. 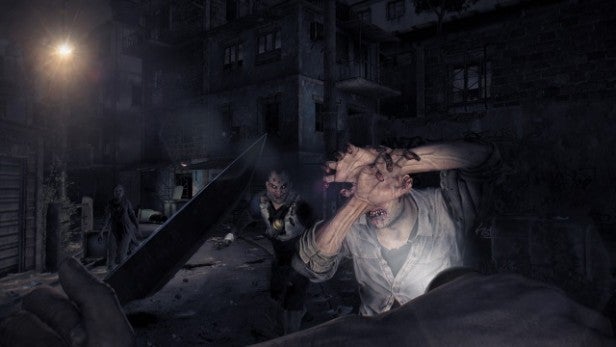 Missions, meanwhile, are surprisingly engaging. Dying Light has its share of delivery boy missions and repetitive tasks – finding and removing zombies from safe houses or rushing for air-dropped supplies – but your objectives have a nice way of pushing you in new directions, or in the way of new challenges that will stretch your skills. And while you’re facing these trials, your capabilities are constantly improving, with interesting and diverse skill trees for parkour, combat and basic survival. By separating them out, the game rewards you for doing what you like doing best, so that the more time you spend on the rooftops and using dropkicking, grappling skills on zombies, the more acrobatic and ninja-like you get.

Best of all, Dying Light has a day/night cycle which actually makes a tangible difference. During daylight you’re only facing run-of-the-mill zombies, augmented by a range of tougher club-wielding, acid-vomiting, exploding undead dudes as time goes on. At night you face all of these, made slightly more aggressive, but also nocturnal hunters that move fast, jump high and can take you down in seconds. Using your Last of Us-style Survival view you can locate them and see their fields of view, turning Dying Light into more of a stealth game. 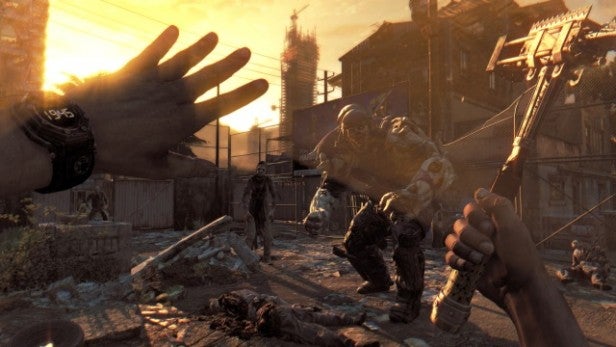 However, this isn’t a stealth game like Metal Gear Solid, where you’re a super spy with the edge on your opponents, but one where you’re seriously vulnerable, hampered by poor light vision and a torch that attracts attention. Your best bet becomes a run from safe house to safe house, where ultraviolet lighting wards the hunters off. You can, of course, use these to rest through the night, but where’s the fun in that? You get bonus experience points for outrunning hunters, and certain missions require that you do them at night.

The night missions make all the difference. The problem with any zombie game is that, after a while, the zombies aren’t that terrifying. They’re dumb. They’re mindlessly aggressive. They’re mindlessly, well, mindless. The more you develop weapons and strategies for beating them, the less unnerving they become, and even your human enemies aren’t going to win awards for smarts. At night, though, everything changes. You become the quarry, and the best encounters become panicked chases where you’re trying to navigate the rooftops and alleyways while being pursued by the relentless hunters – and you can’t even see where you’re going. If that doesn’t raise your pulse rate, nothing short of Alien: Isolation probably will. 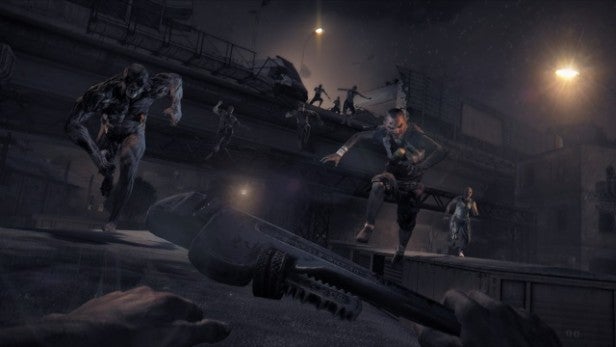 Techland’s Chrome engine has come on leaps and bounds since Call of Juarez, in terms of visual fidelity at least. Dying Light gives it an impressive next-gen debut, rich in detail and believable clutter, and handling dozens of zombies on screen without painful slowdown. Chrome hasn’t, of course, always been so stable, but while we’ve heard a few horror stories about frame rates and glitches on the PC version, the Xbox One version has been pretty much rock solid, with only the tiniest hint of tearing or slowdown in particularly busy scenes or cut-scenes. Dead Island aficionados had a funny way of making its technical shortcomings seem part of the fun. Dying Light’s fanbase won’t need to.

No zombie-bashing sandbox game would be complete without a co-op mode, and Dying Light delivers, with options for public or private games where up to three other players can join you on your mission. More unusually, it also crams in a Be the Zombie mode where you can take the part of a hunter, harassing a team of human players before they can wipe out zombie nests. This gives you a chance to get to grip with the hunter’s powers, including a titanic leap, a vicious pounce and a pair of extending tendrils that can pull you rapidly around the map. Both online modes have plenty of potential, though we struggled to find active games for either at the time of writing, despite an accessible Quick Join option. 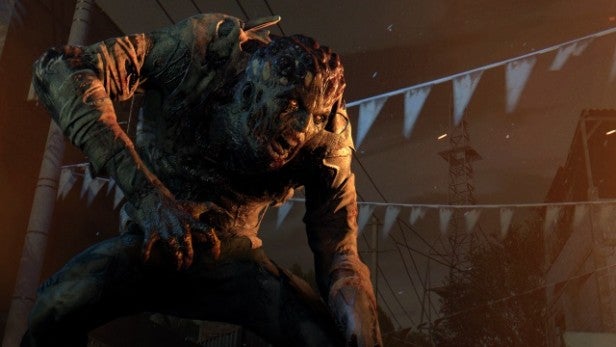 Dying Light is tense, exciting and absorbing, and it’s biggest failing is that it stretches things out for a little too long. After a barnstorming first eight hours where everything just clicks, we get a few hours where the gameplay starts to grind, as you struggle against tougher zombies and armed bandits, while your own kit feels hopelessly under-par. The obvious answer is to spend some time searching, discovering new blueprints and gathering ingredients, but the result is that the game loses pace – and possibly some of your interest. The good news is that it will regain both, even if you’ll still sometimes find that it struggles to retain them over the long haul. The majority of the time, though, it works like a treat. Between the parkour, new enemies and new implements of zombie mass destruction, there’s always something fun coming down the line.

Verdict
It’s Dead Island meets The Last of Us meets Far Cry 3 meets Assassin’s Creed, but while Dying Light doesn’t score highly for originality, it does for parkour thrills and zombie-slaying antics. The pace lags occasionally from time to time, but this is a slicker, most refined game than you might ever have expected from the brains behind Dead Island, and one that deserves to be a hit.