Far Cry 3 is not a game which wants to mess around. It knows exactly what it wants to be and, as soon as the incredibly brief tutorial section is over with, it gets down to delivering that vision in as direct a manner as it can. That alone makes it brilliant because what it wants to be is basically a guerrilla tactics simulator in an open, tropical paradise. It’s you, a small arsenal of weapons and an enemy base for you to assault however you want.

You can delve deeper into the game, of course – there’s a wholly new RPG system introduced which lets you learn new skills and craft new items, but that base-assaulting idea is what lies at the core. Attack them from any angle, using any tactics you can muster. Personally we like to take the high-ground and rain arrows down with a compound bow, but there’s an argument to be made for direct assaults or more discrete attacks too. Mines, vehicles and melee are all equally valid ways to deal with your foes. 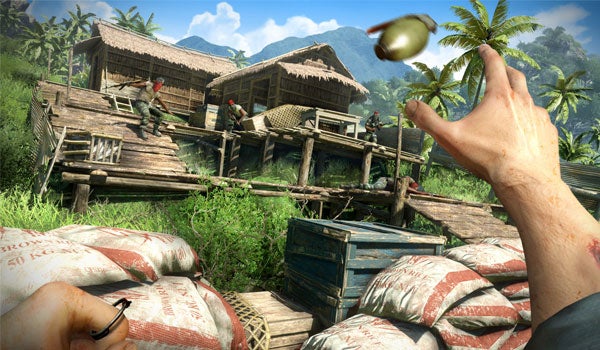 The ‘foes’ are generally pirates, by the way. Like Far Cry 2 before it, Far Cry 3 doesn’t have a continuing story and you don’t need to have played the previous games to understand what’s going on – which is that you’re a tourist who’s been kidnapped.

You aren’t alone in your plight either; a group of your friends have also been taken and are being held in camps all across the island. When you – a rich American brat with no previous direction in his life – escape, you make it your task to free the others and escape. Luckily, the indigenous tribe take you in and teach you how to be a warrior, among other things.

Freeing the others is a complex task, however. Far Cry 3’s world is massive and full of competing factions, so you’ll have to run missions for each in order to find out where your friends are – and the allies you take along the way are often far from reliable. The Doctor who offers to shelter your pals and provides you with a boat for eventual escape proves particularly menacing, for example. In fact, he spends most of the game high as a kite and ranting to himself. 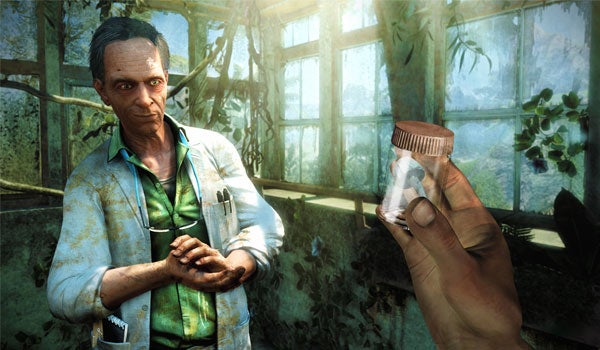 Even that’s only for starters though, as one of the main negatives some may count against Far Cry is the game’s quantity of adult material. Throughout the course of the game you’ll feed all sorts of fetishes, be privy to implied atrocities and do plenty of drugs yourself. This is by no means a game intended for the easily offended.

Not all the drugs and violence are framed badly, however. One of the places where Far Cry 3 iterates positively on its predecessors is bringing the non-human side of the environment into the picture. At the start of the game you’re taught to be a hunter and forager as well as a warrior; you’ll spend a huge portion of the game stalking wildlife and collecting their skins. These resources then get plied into various upgrade paths, increasing the amount of weapons you can carry and more.

In fact, odd as it sounds, we actually found ourselves spending more time hunting animals than engaging in a lot of the other single player missions. There is all sorts of side content littering Far Cry 3’s world, but most of it can be broadly divided into assassination, racing or hunting missions – of which the hunting is the most fun.

If the assassination and racing missions can be a little repetitive however, then an alternative cure to that could be the multiplayer, which is as robust as any we’ve seen. There’s the standard competitive modes for starters – deathmatch and the like – but it’s the co-operative campaign which is the main draw in our opinion.

Supporting up to four players online, the co-operative campaign tells a wholly standalone story with new characters, objectives and content for you to wade through. It also forms a subtle prequel for the single player game, with the plot orientating around four mercenaries on a holiday cruise who are betrayed by the captain and left for the pirates to enslave. Needless to say, things don’t go to plan for the captain and the foursome end up pursuing him across the island.

What makes the co-op so notable though is that as well as offering a social aspect to the game, it also changes the way you’ll approach the game in a functional sense. Enemies are much harder to defeat in co-op and the more focused mission design means there’s fewer options on the table too, though that’s compensated for in the presentation. Our experience of co-op was that we spent less time being creative with the supplied range of hand gliders and jeeps, but far more time charging into battle and laughing with friends. 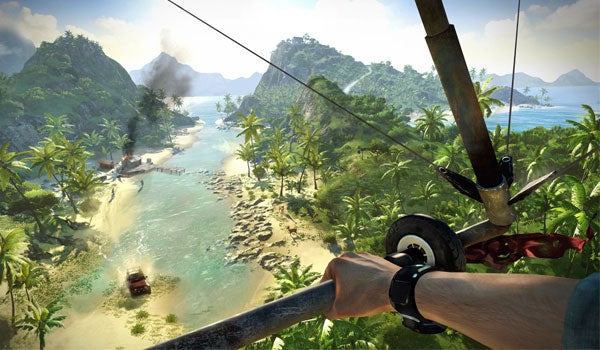 Well, laughing and yelling, actually. Teamwork is key in Far Cry 3 and one of the key ways this is supported is in a feature called ‘Battlecry’, which sees one player let out a yell that buffs up the skills of nearby allies.

The co-operative campaign is still far from being technically smart, however. The storyline is, like that of the single player, childishly framed trash for the most part and trying to co-ordinate complex tactics isn’t made easy for those without a microphone, but so what. 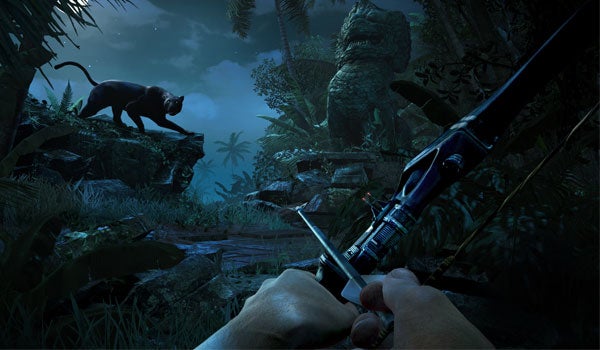 Far Cry 3 may be a trash game with more literary pretensions than actual smarts, but it’s still hugely entertaining – like a more intimately presented Just Cause 2, in a way. What’s more, between the basic fun of the competitive multiplayer, the freedom of the single player and the socialness of co-operative, Far Cry 3 offers a breadth that’s unmatched by anything else this year.

Sure, the driving missions might be a bit boring and the potty-mouth might be a bit try-hard, but those points don’t detract from the fact that Far Cry 3 offers something for everyone. Something brilliant.