Available on PS4
Two series, both huge in Japan but never quite reaching the same level over here. On the one hand, we have Square Enix’s Dragon Quest, still a massive franchise in its homeland, a rival to Final Fantasy, but a bit of a cult curio here in the West. On the other, we have Dynasty Warriors, Koei-Tecmo’s huge-scale battlefield brawler, which has extended its reach over the past decade to take in other franchises from Gundam to The Legend of Zelda. Put them together, and what do you get?

Well, in the case of the original Dragon Quest Heroes, another game that never quite received the attention it deserved. Outshone by Koei-Tecmo’s collaboration with Nintendo, Hyrule Warriors, it was actually the better game; stronger visually, more varied, and with more interesting game mechanics. And now it’s followed by a sequel that, in every way, is better still.

The original blended Dragon Quest with a Warriors game, but leaned more towards the latter. For all its colourful cartoon visuals, based on Level 5’s work in the more recent Dragon Quest games, it was still primarily a brawler, where you took a team of heroes through a series of battles – hacking, slashing and spellcasting their way through hordes of monsters. 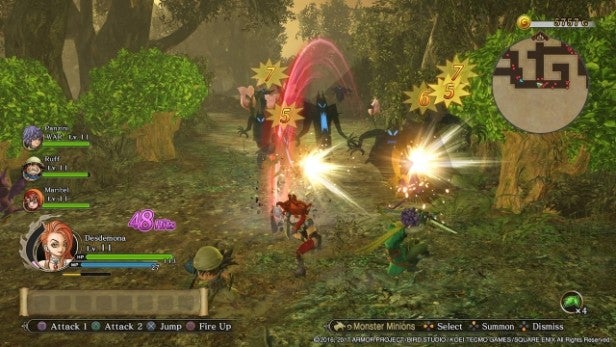 As in a Warriors game, the trick wasn’t just in learning your heroes and their combos, but in making sure you were in the right area at the right time, tackling the key objectives. Dragon Quest Heroes still pulled in some smart ideas, such as the ability to build up Tension through spectacular combat and launch, RPG-style special attacks. Or its collectible monster medals, used to summon monsters to fight alongside you. First and foremost, though, it was a Warriors game.

The sequel takes more inspiration from its JRPG parent. The plot is smarter and more central, and there’s greater room to explore. The battled are bridged by wilderness areas you can roam through, and urban areas crammed with facilities and stores. The JRPG underpinnings were always there in Dragon Quest Heroes’ skills, progression and crafting systems, but now they seem to have come to the fore. While it’s still a very different kind of game, it feels more like a proper Dragon Quest than Hyrule Warriors feels like a Zelda.

In addition, the team at Omega Force has made some smart improvements here and there. In the original, monster medals had one primary function: summoning monsters to fight alongside you. Now some summon critters will give you a perk or protect you from poison, while others will instead transform you into a monster, giving you a few seconds of heavy-duty powers. 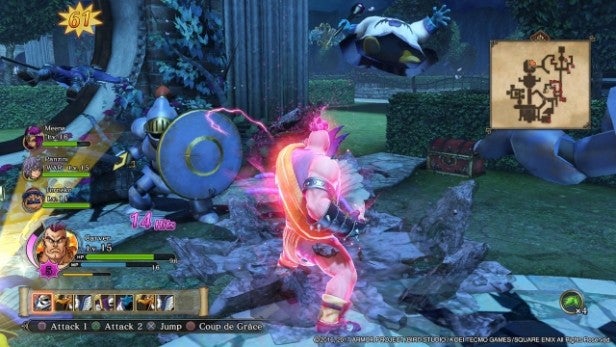 This, combined with the almost constant need to switch between heroes, use their powers and activate their high-tension attacks, gives the fighting a more varied, flexible feel. We even get some interesting tag-attack mechanics, encouraging you to think harder about who you field in your four-hero squad. Just in terms of the raw gameplay, this is the most enjoyable Warriors game I’ve played, but also arguably the richest.

That’s backed up by decent storytelling and – shock, horror! – varied level design. The new wilderness areas aren’t actually much to write home about: basically they’re large areas packed with roaming monsters ready to tackle, with the occasional stranded guy or girl who needs assistance, and the odd chest hidden here and there. Sure, the game starts throwing in more demanding challenge monsters later on, but we’re still talking padding, not an integral part of the action.

The battles? They’re a different story. Some are straightforward scraps or efforts to eliminate monster-spawning portals before the critters overwhelm you, but many take a different form. Here you’ll find mysterious pyramids with traps galore, where your sneaky foes will try to separate you from the king you’re protecting, or suddenly throw up a squad of archers. There are poisonous bogs to traverse, mischievous ghosts to find, simple switch puzzles to solve, and a whole lot more. For once, you’re not just fighting – you’re on something that feels more like an adventure. 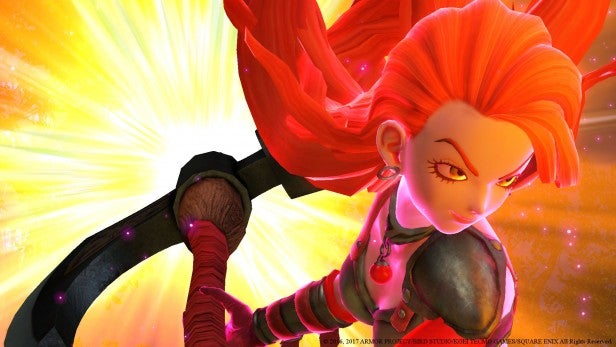 There’s serious RPG-style depth here, too, both in the character progression, where points earned in battle can be spent on new skills and combat moves, and in the crafting system, where ingredients can be bonded with enchanted accessories to make their magic more potent. There’s a new trainer on the scene – a rather cool Zen master – plus opportunities to ditch your current ‘warrior’ hero build and specialise as a different class, with some having class-specific quests. The fact that this involves levelling down, however, may put off many players.

Although it may be hard to gauge from the screenshots, Omega Force has also played a blinder on the graphics front, taking classic Akira Toriyama character designs and the sort of scenery and monsters you might have seen in Dragon Quest 8, then dragging them into the current console era with often stunning results. 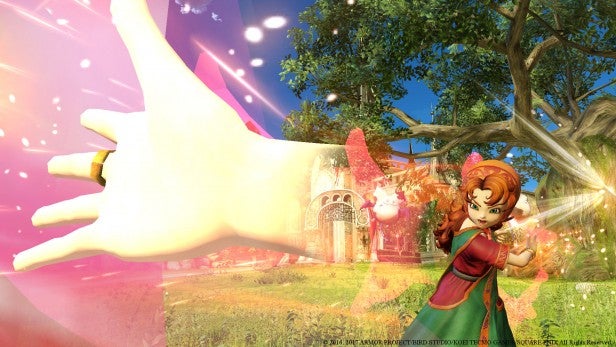 A Dragon Quest game won’t – and shouldn’t – look photorealistic, but the textures, effects and lighting often show impressive levels of care and detail, and when you’re walloping dozens of monsters around on-screen at the same time, there’s a definite sense of spectacle.

There are some cracking big boss battles on offer, ones that aren’t just exciting to look at, but actually interesting to play. Throw in the classic DQ themes and some solid voice-work, complete with the series’ signature, sometimes bizarre predilection for regional accents, and this looks and feels like Dragon Quest through and through.

If there’s one area where Omega Force has missed the boat, it’s co-op play. Firstly, there’s no option for split-screen co-op in a game that richly deserves it. In my household, both my daughter and I are playing it and having a lot of fun, but there’s no easy way we can have that fun together.

Secondly, while there is online co-op, it’s limited to a Dark Souls-inspired help-request mechanic – where you can summon a player who’s already completed the current mission into your game – and a rather more limited set of dungeons specially designed for online play. When so many other games support full, four-player campaign co-op, this seems like a wasted opportunity.

Verdict
I won’t lie to you: Dragon Quest Heroes 2 is an acquired taste. It helps if you’ve acquired a taste for either Dragon Quest or the Warriors series previously, preferably both. That said, it’s easily one of the most accessible and enjoyable games Omega Force has produced, and a real joy to play if you already know and love Dragon Quest.

Richer, deeper and more varied than the original, it’s also closer to the true nature of Square Enix’s beloved series and a much stronger hybrid than the underwhelming Hyrule Warriors. If some family-friendly fantasy hack-and-slash is up your street, join the fray and get stuck in.