Available on PS3, PS4 (reviewed)
It’s probably quicker to explain Dragon Quest Heroes: The World Tree’s Woe and the Blight Below than it is to say the title. Basically, this game does for Dragon Quest what Hyrule Warriors tried to do for Legend of Zelda. In other words, it’s a bit of a mash-up, taking elements and characters from Square-Enix’s epic Japanese RPG series and combining them with the large-scale battlefield combat of Koei-Tecmo’s Dynasty Warriors games. It even has the Dynasty Warriors team, Omega Force, at the helm.

The big surprise is that Dragon Quest heroes does it better. You really needed to love Zelda and enjoy Dynasty Warriors gameplay to get anything out of the underwhelming Hyrule Warriors. By comparison, Dragon Quest Heroes works even if you’re only just on nodding terms with Dragon Quest. 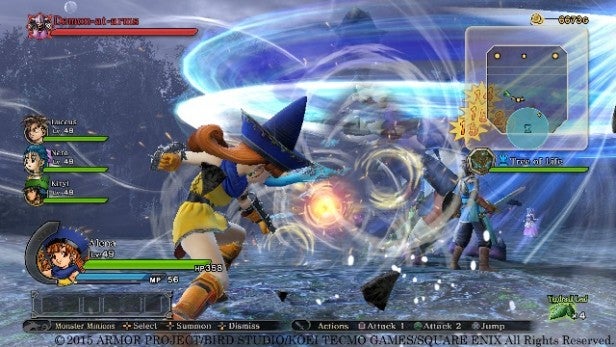 A lot of that comes down to the way the elements are weighted. Where Hyrule Warriors was a little too much like Dynasty Warriors with a Zelda reskin, Dragon Quest Heroes is a more balanced hybrid, bringing in enough RPG components to make it more than a massive-scale strategic brawler. Sure, the gameplay focuses on wading into battle against hordes of Dragon Quest beasties, but there’s a lot more going on beyond making sure you’re in the right place at the right time to batter the right foes.

For a start, there’s a vaguely coherent story involving two childhood friends, now captains of a valiant king’s guard, working to find out why the previously peaceful monsters of the kingdom have suddenly gone bezerk. Teaming up with the king and a guild of magician/engineers, they end up gliding around the realms in a floating HQ, battling the mutinous beasts where they find them, picking up new allies and attempting to identify and fight the evil sorcerer at the heart of this dark business. It’s clichéd stuff, but it keeps the game moving. 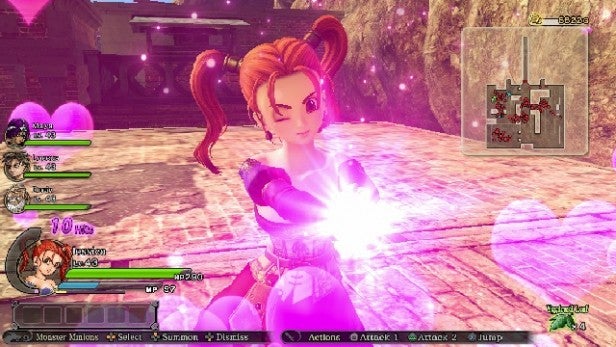 Through the use of that old chestnut – the transdimensional rift – it also allows Dragon Quest Heroes to bring in favourite heroes from throughout the series’ history. You start off with the two bold captains, the king and the head of the guild, but before long you’ll find your ranks enhanced by Kiryl and Alena from Dragon Quest IV, the wonderfully misnamed swordsman, Terry, from Dragon Quest VI and – best of all – Jessica and Yangus from Dragon Quest VIII; the first installment to make it big here in the West.

It helps if you already know these characters, but if you don’t it doesn’t matter. These are big, exuberant personalities with their own star powers and their own roles to play.

Each hero has basic and strong attacks, but holding the R1 button allows you to select from magically-enhanced specials, causing lightning bolts to strike, ice to chill your foes or whirlwinds and earthquakes to sweep across the battlefield.

Some characters have useful heal or buff capabilities, others are brilliant for crowd control, while others still make great heavy-hitters for tackling boss monsters or armoured enemies. All also have a supercharge mode and smart bomb-style attack which you can engage when you’ve built up your tension meter.

You can switch between heroes at will, with the others working under a reasonable if not exactly pro-active AI. However, you can only take four out at a time, making getting a good balance quite important. 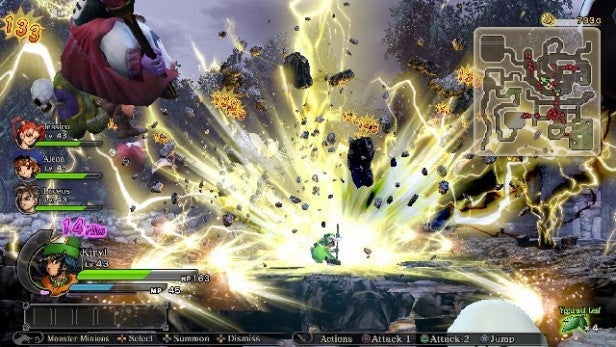 The battles themselves break down into only a few types. Most involve defeating a number of guardians and closing portals before a stream of monsters overwhelms a city. Most also require you to protect a magical tree root, gates or specific buildings. A few focus down on defeating one or more bosses. This isn’t particularly sophisticated stuff, but you need to balance mashing guardians and stopping portals with protecting whatever it is you have to defend. As in all the Dynasty Warriors games, you need to fight strategically, prioritizing targets and recognizing when the flow of the battle has shifted to the other side of the map.

So far so standard Dynasty Warriors, but Dragon Quest heroes has some fresh ideas to keep things interesting. On the one hand, there’s an RPG-like character progression, where characters earn experience and level up through fighting, giving you skill points you can spend on health, strength and resilience, but also on new or enhanced abilities and attacks.

This makes you attached to your team while also making you think carefully about who you field. Do you really want to neglect a character who may turn out to be useful later on? 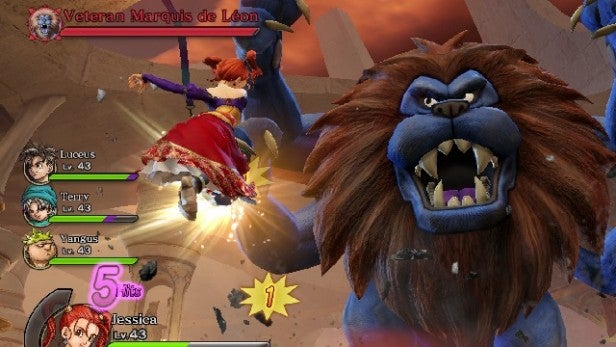 On the other hand, there are surprisingly deep systems of gear in play, covering not just the expected weapons and armour (here magical orbs) but a full crafting system where ingredients scavenged on the battlefield can be transformed into rings and amulets with specific offensive or defensive properties. You can also take on quests to earn extra materials, taking on odd monster pest-control jobs and gathering the by-products of mass-monster slaughter for a growing clientèle.

Best of all, some monsters defeated on the battlefield are converted into medals, which can then be used to summon a beastie of the same basic type to fight on your behalf. This becomes key to stemming the tide of monsters, though you’re limited to just a few at first. Being able to call in a mechanical hunter or a hulking golem to defend your tree root frees you up to battle on elsewhere. 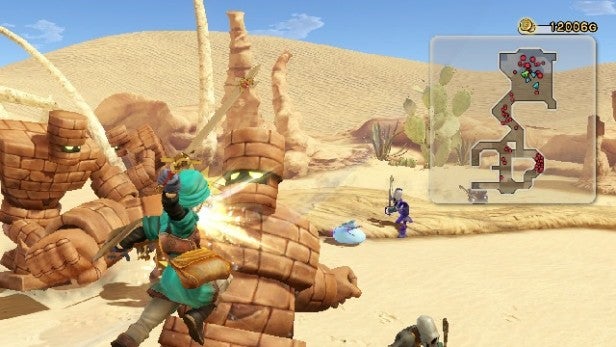 Omega Force has even been smart enough to spot potential weak points and fix them before it’s too late. Fairly early on there’s a danger that simply getting from objective to objective could become a chore, transforming Dragon Quest Heroes from a game of glorious combat to one of monster-battering logistics, but before you know it a zoom spell appears, allowing you to teleport instantly between key points. And while the difficulty spikes later on, your heroes accumulate experience even when you fail, while a series of challenge missions gives you opportunity to practice, build up skills and grab new ingredients to craft with or sell. If you find the going rough, you can still toughen up.

All of this makes Dragon Quest Heroes weirdly compulsive, and the shortness of each battle – most take ten to fifteen minutes – makes playing it approximately as more-ish as a tube of Pringles or a bag of Maltesers. What’s more, Omega Force has done a fantastic job of interpreting the bright, cartoon style of Dragon Quest VIII and XI for new hardware, adding layers of detail and lighting without spoiling the clean lines and vibrant colours of the earlier games. It only makes you wish Square-Enix would return the mainstream Dragon Quest series to the PlayStation platform, and give fans the next-gen Dragon Quest that they deserve. 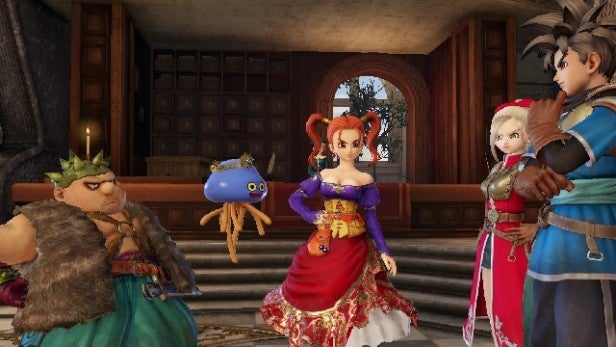 This offshoot still won’t be for everyone. Dragon Quest has always been the blue skies and sunshine foil to the iron and thunder of Final Fantasy, and Heroes has all the elements – the bizarre, bug-eyed beasties, the cartoon graphics, the quirky humour – that make the series special. Oddball characters, running gags and weirdly appropriate regional accents are part of the appeal.

Those of us who love the series love it for its childlike silliness, but if you like your fantasy dark and gritty, you might feel differently. It makes The Legend of Zelda looks like The Witcher. Meanwhile, for all the Dragon Quest enhancements, the action remains repetitive. There is an awful lot of hacking and slashing to be done, and some of the challenge missions are a lot too much of a fairly small good thing.

All the same, I’d put this down as an unexpected pleasure. Like Hyrule Warriors, it’s easily dismissed, but here there’s something richer and more rewarding beneath the surface that keeps you coming back for more. Is this one of the year’s most essential games? Probably not, but one of the most lovable? For some it will be.

Verdict
While it has the same Dynasty Warriors meets… template as last year’s disappointing Hyrule Warriors, Dragon Quest Heroes triumphs by making smarter use of the Dragon Quest franchise. Beneath the strategic brawling there are layers of RPG complexity, while above it rests a whole lot of Dragon Quest charm. It’s a surprisingly irresistible combination that makes this a surprising little gem.