Exclusive to Nintendo Wii U
At heart, Hyrule Warriors is a hybrid of two series and two genres that don’t share a whole lot of common DNA. The Hyrule bit comes from Legend of Zelda, long one of the jewels in Nintendo’s crown, and well established as one of the most loved adventure series across the world. Even if you haven’t played one, you’re probably dimly aware of what they are and how they work. The Warriors bit comes from Dynasty Warriors: Koei Tecmo’s long-running series of hack-and-slash battlefield brawlers, which began exploring Chinese history, but eventually expanded to cover Japanese history and sci-fi anime.

The Zelda games are third-person adventures, where your young protagonist – Link – becomes a hero, exploring a fantasy landscape, delving into dungeons, collecting new weapons and equipment, and using them to slay mighty bosses and reach new areas. The Warriors games put you in the boots of a famous fighter, as you rove the battlefield, slicing your way through the enemy hordes, seizing objectives, fighting duels and basically working to push the momentum of the battle in your side’s favour.

How does Hyrule Warriors combine the two? As you might expect, it does it by taking the core gameplay of Dynasty Warriors and putting it inside a Zelda skin. Link, Princess Zelda, Impa and the mysterious Sheik take over as the principal cast members, and the battles take place in well-known Hyrule locations. However, the teams at Koei Tecmo and Nintendo deserve a little more credit than that. While it plays like a Warriors game, Hyrule Warriors takes enough ideas from Nintendo’s classic series to give it some of the look and feel of a Zelda game. 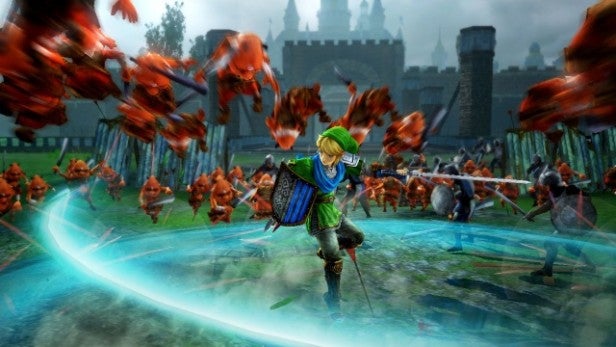 Nor has Koei Tecmo been lazy. We could have had a compilation, stringing together battles inspired by the Zelda series, but instead we get a brand new story, where a new Link goes from soldier cadet to green-clad champion, and where Hyrule comes under attack from new enemies – the sorceress Cia and her henchmen Volga and Wizzro. Old hands might anticipate a more familiar face behind them, and the tale eventually opens up to cover three distinct Hyrules and periods of Zelda: Ocarina of Time, The Twilight Princess and Skyward Sword.

The basic combat mechanics are classic Warriors, with a light attack, a heavier attack and a special attack available when you charge up your energy bar. That means there’s copious amounts of button mashing as you fight your way from one objective to another, and there’s certainly a simple, tangible pleasure in smacking your way through the enemy ranks, scattering foes in every direction as you swing the current weapon your choice. Yet Hyrule Warriors cleverly pulls in elements from Zelda, from the gadgets – bombs, boomerangs and arrows – you’ll unlock in the early missions, to the way that special attacks tie in with the powers of the heroes we know and love from the original games.

And while it’s tempting to dismiss the gameplay as brainless, there is a layer of strategy involved. Hyrule Warriors makes its objectives and pivotal moments more explicit than the majority of Warriors games, but you’ll still find yourself with several things you could be doing at any one time, whether it’s the bread and butter stuff – seizing or defending fortifications – or the more mission specific stuff, like saving an unknown girl or escorting an engineer so that he can bring down a drawbridge. You’ll even find Skulltulas appearing temporarily on the battlefield, plus other fan-service bonuses lurking around. 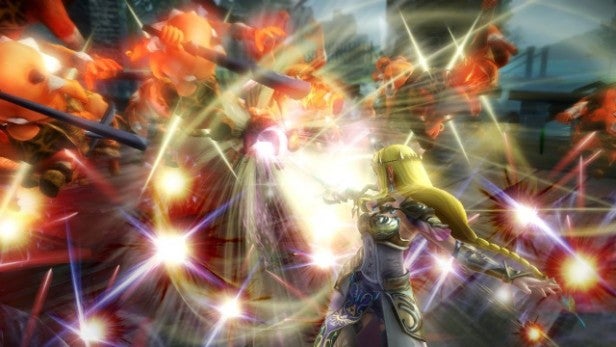 Success in Hyrule Warriors involves force of arms, but it also involves prioritisation. With so many primary, secondary and bonus objectives going on at once, where do you need to be to have the most impact on the battle?

Best of all, Hyrule Warriors pays tribute to the Zelda series with its structure, which often revolves around the finding of gadgets or recruitment of allies in the first instance, so that you can then remove barriers to progress and reach the end of the battle and climactic boss. Expect some familiar names and faces from classic Zeldas, not to mention the chance to batter some series stalwarts you’ve always wanted to bash around but never had the chance. Wouldn’t you like to wipe the smile off the face of those smug Gorons? Now’s your chance!

Credit where credit’s due: this hybrid works better than you might imagine. The bad news is that it doesn’t work quite as well as you wish it would. For all the satisfactions in sending enemies flying by the dozens, upgrading your heroes and making them more powerful, the actual core gameplay just isn’t that varied or exciting, and – for the most part – the challenge is more about navigating the confusing maps in time than bringing the pain to the massed ranks of stalfos or moblins. At times you feel less like a mighty hero, and more like a harassed middle manager with too much on their plate. 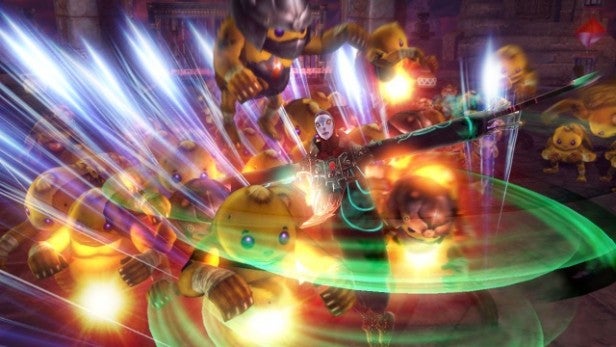 There are also some frustrations. The bosses aren’t particularly difficult to beat, but a few have the kind of annoying, health-wrecking attacks that take you out by surprise in seconds. There are no checkpoints, so you must remember to save at key points during the battle, but with only one save slot you need to make sure that you don’t save at a point where the battle is basically already lost. Defeated enemy hero characters return to the fray a little too quickly, and sometimes the time limits on defeating an enemy or saving a base are just too tight for comfort.

Most irritatingly, many of the missions involve one objective where you must escort a specific character while they accomplish a task. Escort missions are tiresome at the best of times, but when the character you’re guarding shows no real interest in reaching their destination, preferring to rush towards the nearest enemy troops instead, it drives you up the wall. The action becomes less about protecting them, and more about removing all distractions from the scene.

Like some previous Nintendo collaborations (see Metroid: Other M), Hyrule Warriors hasn’t quite got the thoughtfulness or polish you’d expect from a Zelda game. Where the Zelda games stack up simple systems into something richer and more complex, Hyrule Warriors hits you with a bewildering weapon and character upgrade system, then does a poor job of explaining how it works. 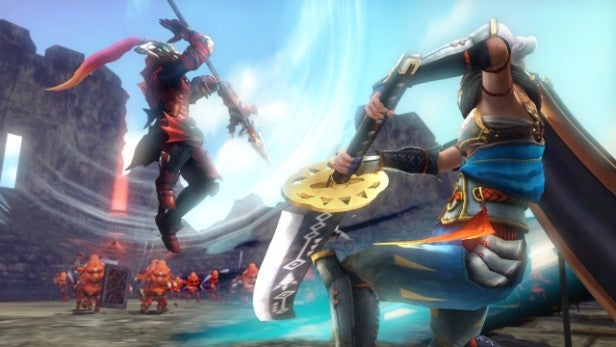 While Hyrule Warriors has its share of cut-scenes, the story is filled in with static images and narration, the last so flat that it makes Peter Dinklage’s turn in Destiny sound like Ian McKellen doing Shakespeare. Even the game’s extra modes suffer. The freeform mode and the challenge mode make perfect sense, allowing you to try out battles with alternative characters or take part in simple challenge activities. The Adventure mode, however, gives you an impenetrable grid of challenges to try, albeit one disguised in some charming 8-bit clothing.

And once again we have proof that only Nintendo seems to know how to get the most out of its hardware. While Hyrule Warriors benefits from some great character design and architecture, it often looks more like an HD remaster of a Wii game than something coded specifically for Wii U. Blocky landscapes, muddy textures and flat lighting are everywhere you look. While you can appreciate the clock cycles spent on keeping so many enemies on-screen at once, you still have to wonder: is this the best that a console that can run Super Mario 3D World and Pikmin 3 can do?

Verdict
If you love the Warriors series then you’ll love the Hyrule spin. If you’d like to try the Warriors series, then this is the most accessible place to start. But while Hyrule Warriors does its Warriors meets Zelda thing well enough – it’s a generous and entertaining hack-and-slash battlefield game – it’s nowhere near the calibre of a ‘proper’ Zelda. It might introduce a new audience to Warriors, but it’ll leave more than a few Zelda fans feeling disappointed.