*Updated* At launch the online servers were not live, we have since revisited the game to test multiplayer, you can read our updated verdict below:

Dragon Ball FighterZ is a 3v3 fighting game inspired by the iconic anime and within moments of starting your first fight, it’s immediately clear how hard the team has worked to create an authentic Dragon Ball experience. Make no mistake Dragon Ball FighterZ is an incredible love letter to the source material. If you’re a fan of Goku and his Saiyan pals past antics, this game is going to tick all the right boxes before a punch is even thrown.

Akira Toriyama’s famous art style is captured perfectly by the team at Arc System Works, using the latest version of the studio’s engine – which also powers Guilty Gear Xrd. At first glance it looks like beautiful 2D artwork, but it is actually a full 3D engine, allowing for seamless transitions into unique animations during battle. It’s clearly a perfect fit for the Dragon Ball license. 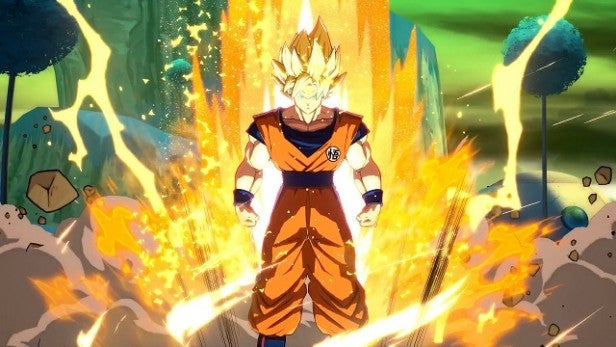 Arc System Works has a reputation for making some of the genre’s most technical titles, creating fighting games with uber-complicated mechanics that reward skilled players, but can be seriously intimidating to newbies.

Dragon Ball FighterZ is a much, much simpler game – initially, at least – by comparison. Hardcore e-sports players may complain about this, but for me it’s a smart move as it’ll open up the game to a wider fan base. There’s four attack buttons – light, medium, strong and special. Bash each one repeatedly and your chosen fighters will do an automatic combo, which is nice and easy those who just want to play the story and enjoy the flashing lights. All special and super moves are quarter circle commands. It’s a very refined system, but it will feel a little simplistic if you’re used to Guilty Gear’s Roman Cancels and Burst Attack mechanics.

That’s not to say that Dragon Ball FighterZ is totally lacking depth, however. As a 3v3 fighting game, like the genre classic Marvel vs Capcom 2, assists are key element. A jab of either of the assist buttons will bring your teammate into the fray to perform one attack, and being aware of what this attack is and how you can use it is key to higher level play. Knowing when to burn meter mid-combo to tag in another character, or when to use a teleport attack to get around an opponent’s defense makes things more interesting for more serious competitive players. 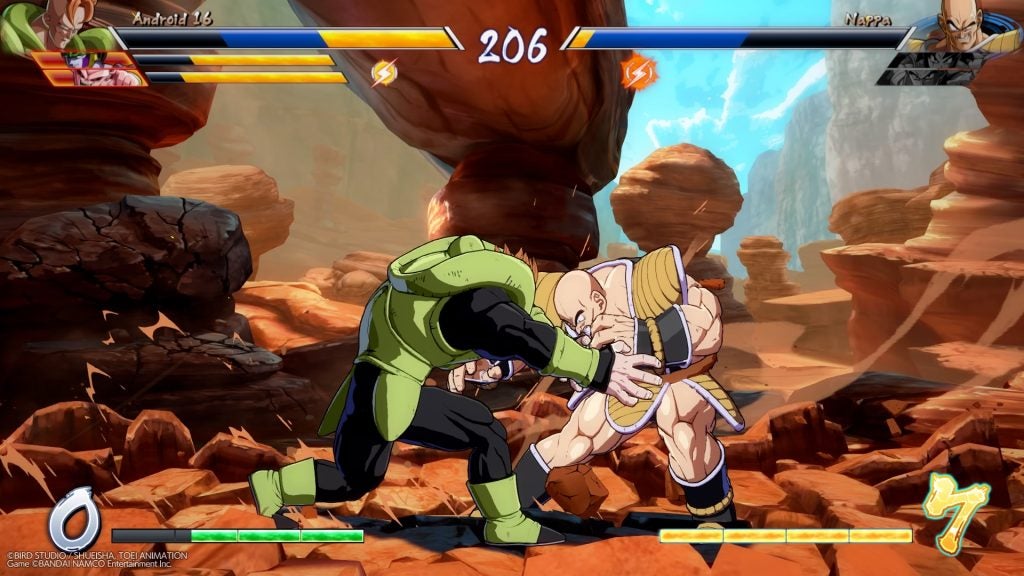 There’s also tools like parries, overheads and guard cancels to help you either defend yourself or break through an opponent’s defense. These are universal mechanics, so every character has them and, like the special moves, they’re all activated in the same way, regardless of who you’re playing as. If this does sound a bit overwhelming, Arc System Works has loaded the FighterZ with excellent tutorials, so unlike many others the necessary support to learn this stuff is all in the game.

The tutorials, plus a wealth of game modes, make DBFZ a fairly well-featured package overall. Story mode has you – as in literally YOU – possess the body of Goku and take part in a few different full voice acted ‘sagas’, full of character cameos that will definitely give fans a real kick. Arcade mode is more than just the usual ‘ladder with a boss fight’. Instead requiring you to hit specific skill goals to unlock different routes and, eventually, a few secret characters.

We were unable to dive into the online side of Dragon Ball FighterZ in our initial review because it wasn’t active until launch day. Since then, however, it’s had a bit of a bumpy ride. Disconnections are worryingly regular, and dump you back into the lobby select screen, booted out of the mode you were currently using. Ring matches, which are basically private rooms, simply won’t show up for some players. The worst part, however, is that rage-quitting is rife. There’s currently no punishment whatsoever for pulling the plug just before a loss, so if you’re trying to climb that ranked ladder, why wouldn’t you? Honour? Fair play? Please. 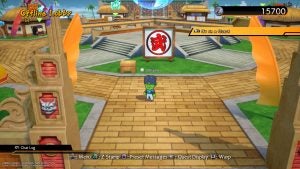 A side effect of the game’s popularity is that Ranked play right now is a total crapshoot. Basically, if the worst player and the best player in the world both bought Dragon Ball FighterZ on the same day and jumped into online battles, they both start at the same rank. This means that, until the player base naturally filters to the rank they should be over the coming months, the matchmaking is a bit all over the place and for every player you smash who barely knew how to block, you’ll get someone lower ranked than you who can bounce you around the stage before you even know what’s going on. Not a problem with the game itself, but certainly worth bearing in mind if you find you’re struggling to find your feet online. Give it a bit of time, and things will even themselves out.

Another baffling decision in Dragon Ball FighterZ online is the fact you can’t just invite friends directly to a private game. You have to meet up in the same lobby, then find the same room within that lobby, create a Ring Match within said lobby, then hope the Ring Match is working so they can join. Sure, cutting about these lobbies with your unlockable avatar is really cool, but it shouldn’t be this difficult just to play with a friend.

It’s frustrating, because when you do get a match for the most part the netcode is exceptional, it’s just all the stuff bolted onto it that is where the issues lie right now. The game is proving to be extremely popular, so perhaps this is just some launch window teething troubles? Let’s hope so, because these need fixing sooner rather than later. Street Fighter V was slammed hard for having similar issues at launch, and right now, perhaps because of the popular license and the fact that Arc System Works have pleased fans in many other ways, these issues seem to be getting a bit of a pass. It’s hard to imagine a game that has blown up like Dragon Ball FighterZ not having these fixed ASAP, but for now, keep them in mind. 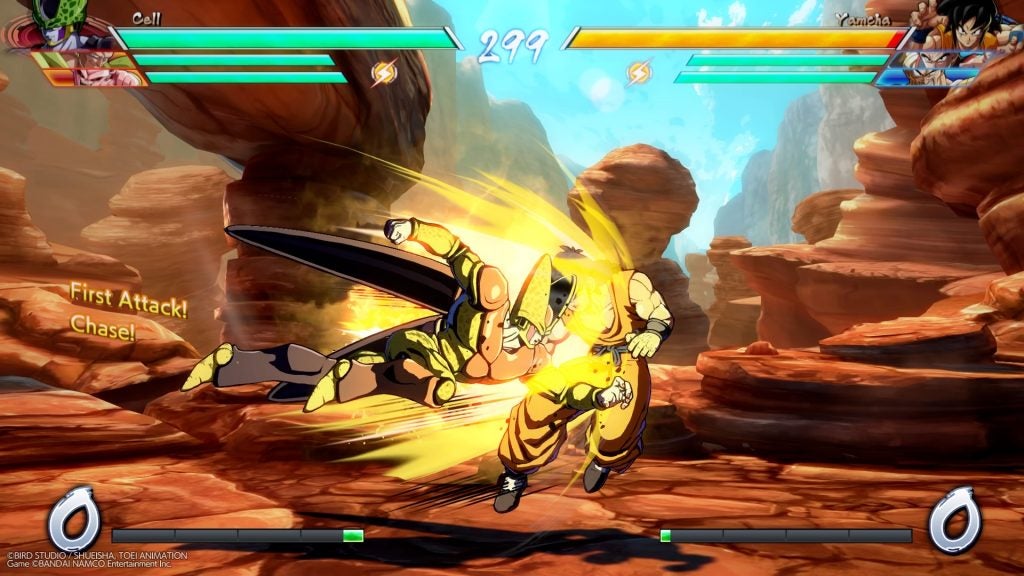 About the only real disappointment is the roster. 24 characters is fine in a 1v1, but in a 3v3 game that’s quite sparse, and with a good chunk of them being quite samey, if you’re not a fan of the series. The universal combos and one button auto combos also make quite a lot of the characters feel quite similar to control, too and it’s only when you really get into the game you start to feel the actual differences.

When you do, Dragon Ball FighterZ is a very accomplished fighting game, full of content for players looking for online or offline action, and fans of the genre. All bases are covered. For those left a little cold by Marvel v Capcom Infinite’s slight change in direction and frankly quite poor presentation, then Dragon Ball FighterZ is going to fill that void.

For Arc System Works, Dragon Ball FighterZ is a chance at real mainstream success. The Guilty Gear games are universally excellent, and have a dedicated fanbase, but their hardcore nature meant they always lost to the Street Fighters and Tekkens of the world when it came to sales. The Dragon Ball license could be what gets the masses interested in the studio’s particular brand of air-dashing, spectacular combat.