The Disgo Tablet 8400 is an aggressively-priced Android tablet that wants to try to offer the screen shape of the iPad mini, and both the features and price of the Nexus 7.

That it manages to squeeze 3G into a £150 tablet sounds impressive too. However, poor performance, a rubbish screen and dodgy design spoil the party. 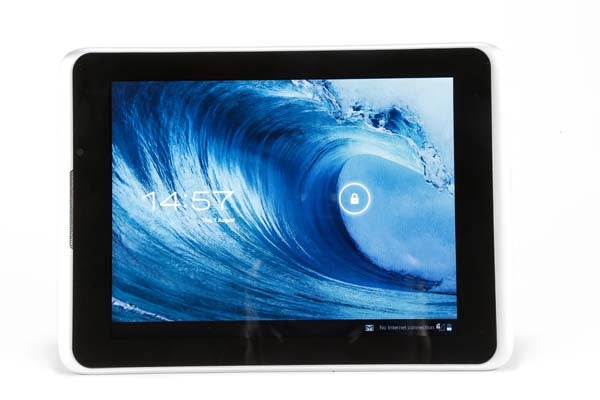 The Disgo Tablet 8400G has a 7.9-inch screen with the same 4:3 aspect as the iPad mini. It’s clearly out to snag a few potential iPad mini buyers who will be attracted to its low price – the cheapest 3G-enabled iPad mini costs £369.

As soon as your hands or eyes get near the thing, though, it’s pretty clear you’re not going to get Apple-grade design with the Disgo Tablet 8400G.

This is not a tablet that looks or feels expensive. Its rear is dimpled in the style of the Nexus 7, but rather than having a textured finish, it’s simple, flex-happy plastic. The silvery trim of the screen is not – as you may guess – metal, but plastic too.

Tablets should not give too much under pressure – and when they do you know you’re dealing with a low-end tablet. A tablet like the Disgo Tablet 8400G. 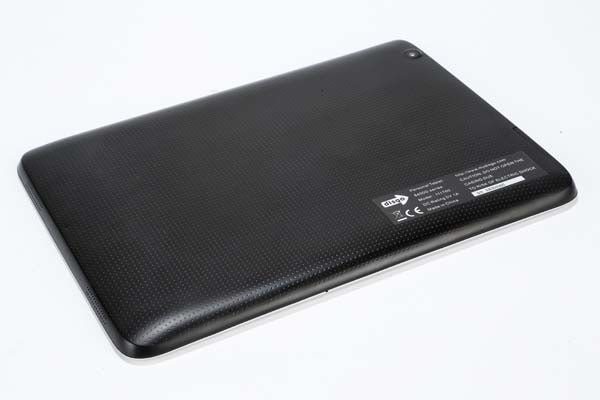 Aesthetically it’s not much better either. Like the cheap tablets you might find in a slightly dodgy electronics shop, all the Disgo’s connections and buttons are arranged along one edge. This makes construction simpler, but doesn’t lead to a particularly good-looking device.

On this edge you’ll find volume controls, the power and headphone jacks and the plastic flap that hides the microSD and 3G SIM card slots. The Disgo Tablet 8400G uses a full-size SIM, and the inclusion of 3G is the main reason for the tablet to exist. It’s one of the cheapest ways to get hold of a 3G-enabled tablet. 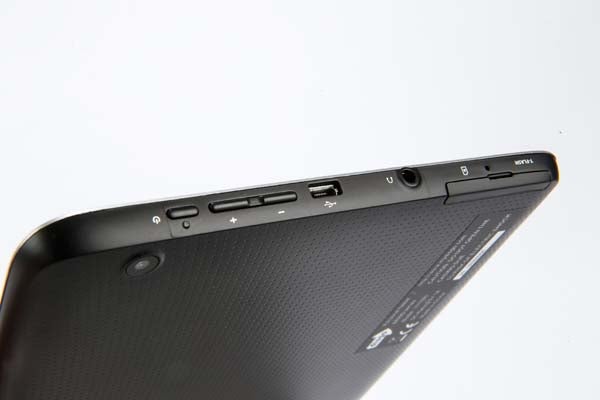 The screen size is another, less notable, stand-out feature. Where most budget Android tablets have widescreen 7-inch displays, the Disgo 8400G has a 7.9-inch 4:3 screen similar in dimensions to the display of the iPad mini.

Size is where the similarities end, though. This is a poor-quality display using the TN panel type that we thought we had seen the last of in tablets.

TN screens are low-cost panels that work well in budget laptops, but their deficiencies are shown up all-too clearly in tablets. They do not have good viewing angles, resulting in severe contrast shift if the display is turned the wrong way. It’s far from worst example we’ve seen, but it still doesn’t cut it. 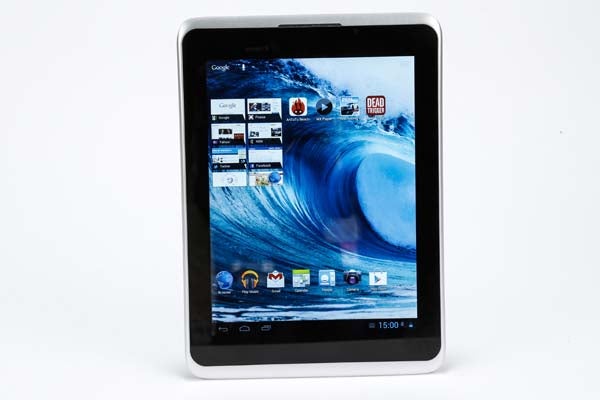 This contrast shift affects movie-watching as it kicks in when the screen is tilted back when held in landscape orientation mode.

Image quality is not great, either. Colours are dim-looking and, much like the iPad mini, resolution isn’t great. With 1,024 x 768 pixels stretched across 7.9 inches, you can easily discern the pixels that make up small text.

A trio of screen limitations team up to bring you a pretty depressing viewing experience, given that you can get a significantly better screen from the similarly-priced Nexus 7 and Acer Iconia A1.

The layer of glass that tops the screen is fairly low-grade too. It’s not particularly well-toughened and does a poor job of reducing reflections. Take the Tablet 8400G outside and it’ll be a reflective mess. 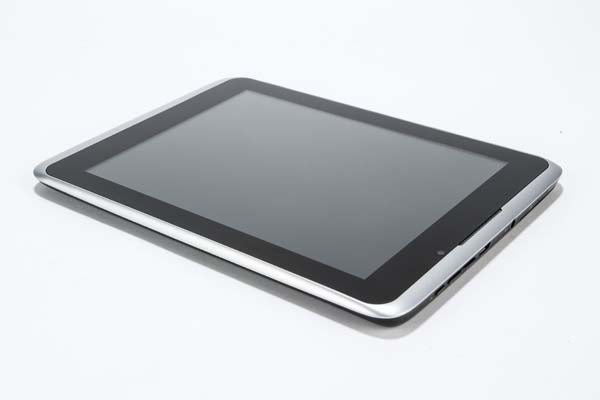 The Disgo Tablet 8400G runs Android, and a virtually untouched version of Android at that. We like to see this approach in low-cost tablets as any manufacturer customisation tends to result in a slowing-down of overall performance.

It hasn’t saved the Disgo Tablet 8400G – performance is poor.

What’s confusing about this Android tablet is that its specs aren’t too bad. The tablet has a dual-core 1GHz Snapdragon S4 processor and 512MB, which is surprisingly good for a low-end device. 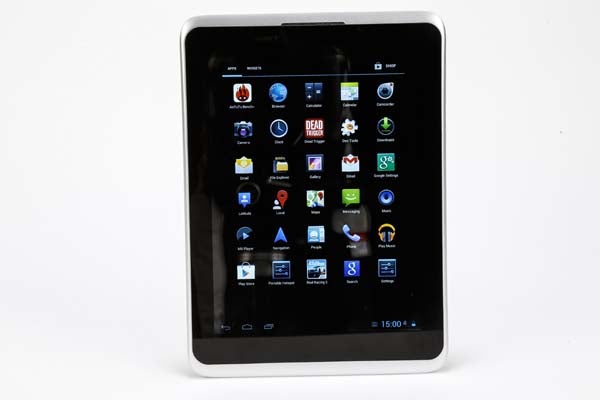 However, lag and glitches in the Tablet 8400G are so prevalent that you simply can’t ignore them. Just flicking through the apps menu is met with the soft of creaky movement of a rusty door that hasn’t been oiled in decades.

Just attempting to install a few from Google Play caused the whole Android interface to crash, and the Tablet 8400G has an annoying habit of coming out of standby with its screen rotated entirely the wrong way.

Waiting for the accelerometer to kick in and re-align the screen gets old pretty quickly too, and in use the screen rotate function has not been well-calibrated. Auto-rotate kicked in when we didn’t want to pretty regularly.

The Disgo Tablet 8400G requires a lot of patience – too much.

Benchmarks support the claim of ropey performance. It wins just 3697 points in the AnTuTu bench, where the first Nexus 7 can comfortably achieve 12,000 or more. The Sunspider benches comes out with a disastrous score of 3489ms – where mid-range Android phones can score under 1500ms (lower is better here).

Thanks to the poor speed of webpage rendering, navigating through websites feels less like surfing and more like wading through a river of effluent. At times it’s painful. 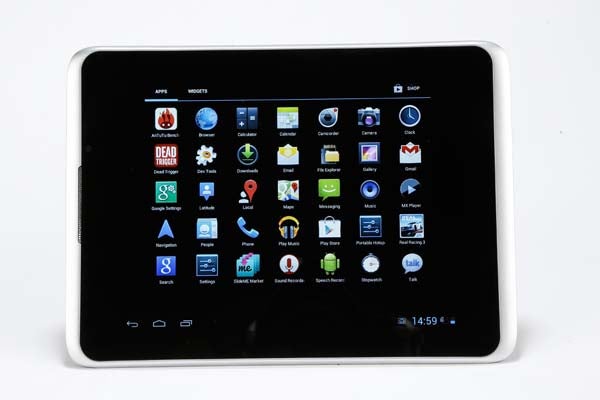 The Disgo Tablet 8400G recalls the bad old days of budget Android tablets, but it does at least have full access to the Google Play store.