Note: This isn’t a definitive verdict and score. It’s early days for Destiny 2: Forsaken, and there’s still a ton of endgame content to tackle and a Raid to polish off. Both verdict and score may be adjusted when we return to update this review in the following weeks.

After a year of huge excitement and mild disappointment we’re finally here, with an expansion that does for Destiny 2 what The Taken King did for Destiny. With Destiny 2: Forsaken the series is back on track, with a new campaign that’s arguably the best Bungie’s done in years plus a ton of strong story, strike and competitive content too.

This all comes at the same time as what’s effectively a reset for the game’s loot mechanics, ditching much of the stuff fans hated about vanilla Destiny 2 with a remix of ideas from the original game. Forsaken still finds Bungie struggling to make Destiny all things to all people, but there’s a sense that it’s remembered what those who love Destiny love – and what we might love in the future.

As with Destiny 2, the campaign content takes centre stage, kicking off with the death of a beloved character – you already know who – and sending you out to the Reef on a trail of vengeance.

Your destination is The Tangled Shore; a general hive of scum and villainy where Fallen crime-lords mix with the Awoken, the Cabal are causing grief and the Hive are lurking not too far below. You’re out for payback against crazed Awoken prince, Uldren Sov, and a hateful eight of his lieutenants, the Barons – a crew of miscreants, maniacs and Hive-loving monster pervs. Are you looking for justice or revenge? Frankly, who cares. These bad boys and girls need taking out. 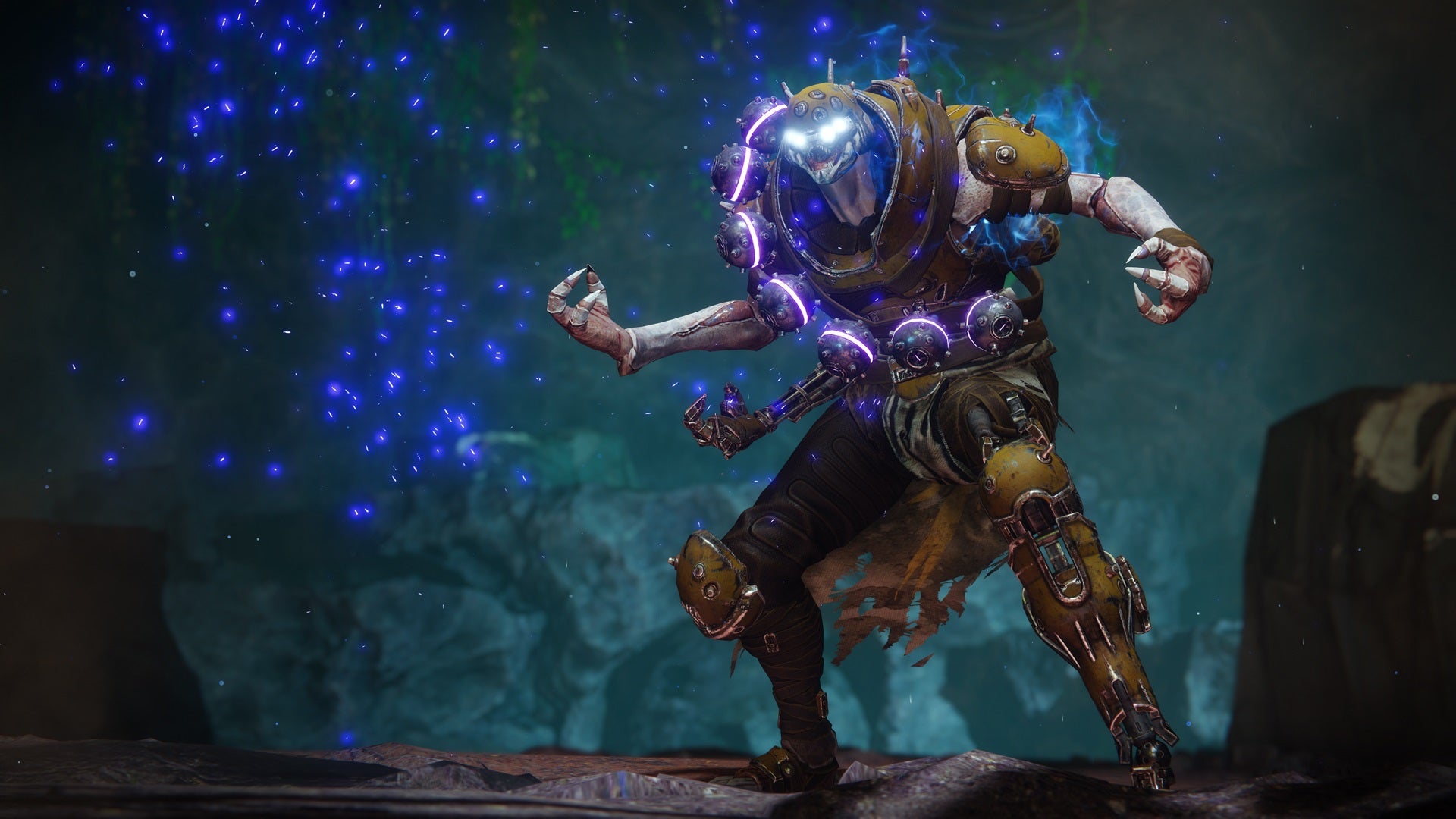 After a lengthy intro act and a chance to explore The Tangled Shore, you’re soon off to deal with the different gangs and crime lords, breaking the meat of the campaign into seven adventures and a suitably epic climax. Most take roughly the same shape – delve into a dungeon or master a series of challenges, then get stuck into a massive boss battle – but what makes Forsaken so good is that each sequence reflects the nature and proclivities of the boss involved. Tackling a mad bomber? You’ll be defusing explosives to get to him and again while you fight him. Battling a master of mind games? Watch out for prank ammo and sneaky behaviour.

True, most of the gameplay is classic Destiny – a combination of linear corridor FPS action and more free-roaming stuff in wider landscapes – but Bungie has imbued each chapter with imagination and variety, making each one feel like its own micro-campaign. And where Destiny’s boss battles used to be full of cheesing tactics and plodding, bullet-sponge adversaries, the new enemies are often smarter, faster and more devious.

I have a love/hate relationship with boss battles which errs on the hate side when we’re talking FPS games, but Forsaken’s efforts feel part classic Capcom, part Dark Souls and part Halo, and I’ve enjoyed nearly every minute, coming back joyfully for more even when I’ve been worn down.

It’s not the absolute best campaign Bungie’s ever released, and some of the attempts to imbue depth and character to the storyline still fall flat, particularly given some slightly, well, odd choices in the final stretch. Yet it’s compelling, interesting and crammed with great set-pieces. To my mind, it’s even stronger and more epic than either Destiny 2 or The Taken King.

Players also tend to forget, or take for granted, how much work Bungie puts into building worlds that are detailed, immersive, imaginative and frequently incredible. At times, Forsaken just looks jaw-droppingly awesome. It’s an expansion made on a massive scale with an equally massive budget – and every dollar shows on the screen.

The campaign isn’t all Forsaken brings to us, either. We get returning characters, like Destiny: House of Wolves’ Petra Venj, plus a new Bounty-giver, a Fallen crimelord known only as The Spider. We get a new class of weapon, the compound bow, which proves to be both versatile and a treat for grabbing headshots with, particularly as it has a nice line in chargeable exploding arrows. 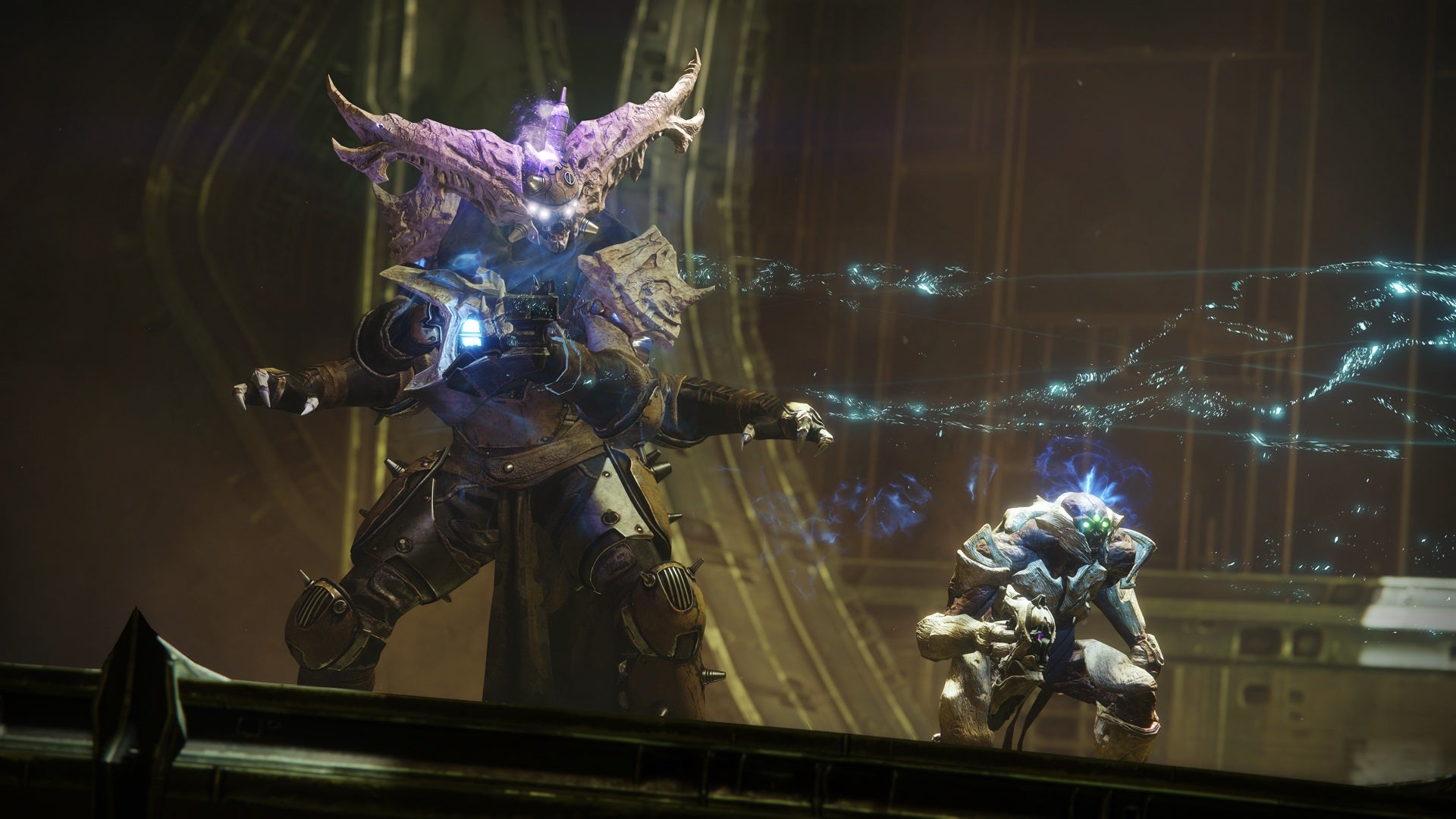 Most importantly, we get a whole new faction: the Barons’ own private army, The Scorn. Reanimated Fallen, they’ve got a nice line in bruising suppressive fire combined with brutal rush-and-smash attacks, making them a satisfying bunch of new opponents – and it almost helps that they look like refugees from a Resident Evil game. Personally, I find them a lot more interesting to battle than the Cabal warriors you most often skirmished with in Destiny 2. Finally, each subclass gets a brand-new skill tree with brand-new supers, and, as my Titan will tell you, there’s nothing better than rushing around a packed battlefield, treating the Scorn to a face-full of flying golden hammer.

All this is great, but I suspect the thing that will really please long-time fans is the way the whole loot and weapon system has been adjusted. Out goes Destiny 2’s two primary (Kinetic and Energy), one power weapon loadout in favour of a more versatile system, where some weapons you would previously have considered Kinetic will now fit into the Energy slot, and vice versa.

In my experience, this actually means something similar in feel to Destiny’s Primary/Special/Power system, but the choice is yours, and I’ve sometimes found myself packing two hand cannons, two scout rifles or two autos, though each using different ammo and with different characteristics and a different feel. Random perk rolls are very much back, so there’s no guessing what you’re going to get or how it’s going to work until you get out there and start blasting.

It’s a bit early to tell how the new weapon upgrade systems are working out. You can still infuse weapons using older, crappier weapons or upgrade some to Masterworks using Masterwork cores, but you’ll need to grab more components, cores and planetary materials to do so, which has the potential to turn into something of a grind.

As far as the more competitive side goes, the big news is the addition of the Gambit mode. Like Halo 5’s Warzone mode, it’s a kind of mash-up of PvE and PvP action, with two teams of four working to kill the match’s enemies – which might be Hive, Vex, Fallen or Cabal – and bank the dark motes so released. Bank enough and you can summon a super-beastie, and you finish them off to win the round. There’s a level of risk and strategy involved in when you keep blasting and collecting and when you head to bank, as dying means dropping all your hard-won motes.

Got that? There’s more. Each team can frustrate the other team’s ambitions by opening a portal, heading into enemy territory and wiping out the other team, if they can in the limited time. 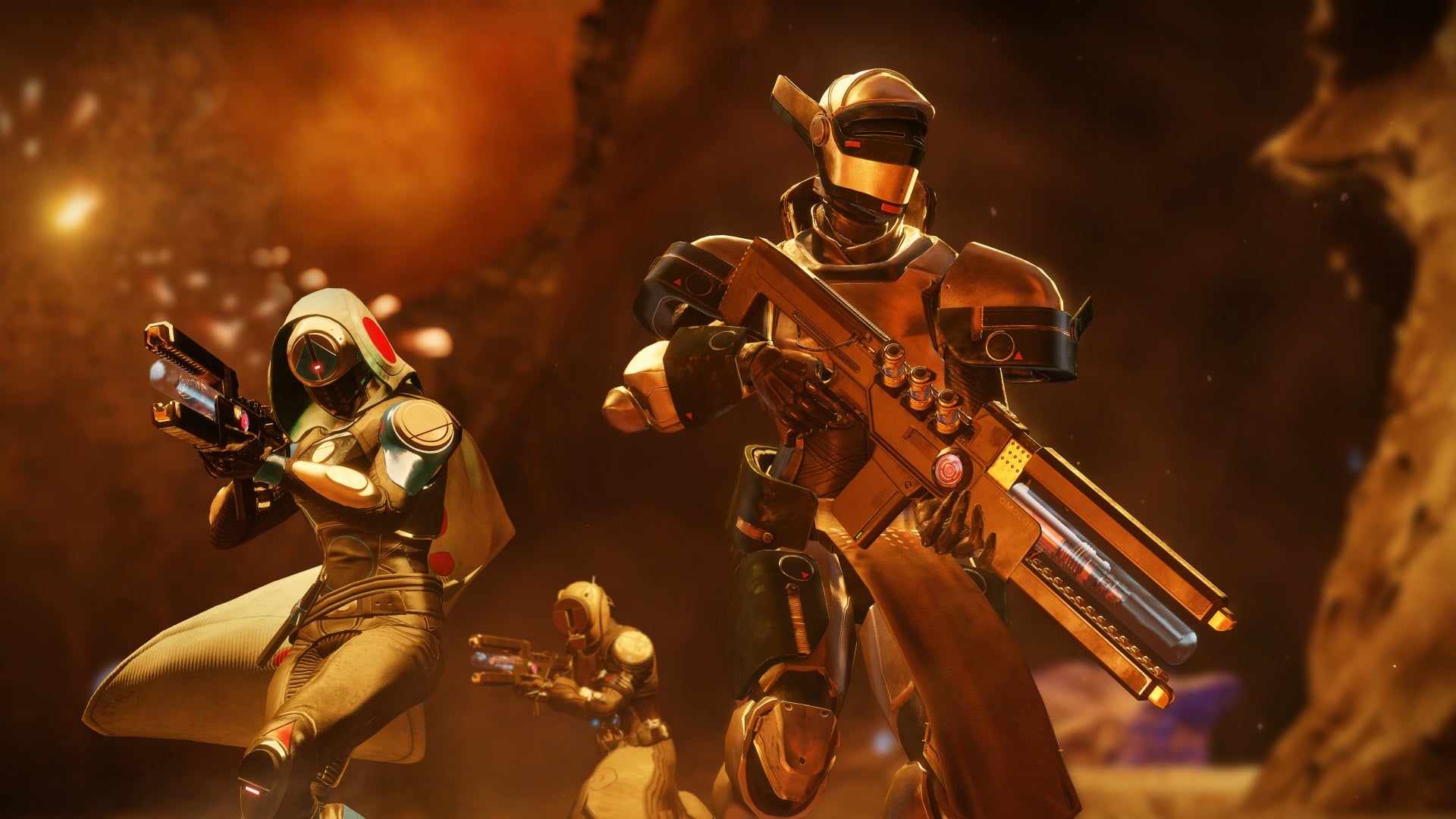 Gambit’s got potential. It reminds me of CoD: WWII’s superlative War Mode in that players can get stuck in without necessarily needing to be headshot champs with ninja map knowledge, and the mix of co-op and competitive is great. There might still be some work on the balancing though. In the matches I’ve played (and there haven’t been that many) the game seems to swing one way or the other very quickly, so it’s going to be interesting to see how Gambit evolves.

Amazingly, all this is just scratching the surface. I’ve already put more hours into Forsaken than I have many full FPS campaigns, yet I haven’t really touched the endgame content, including a whole new region, and I’ve only played the new strikes – both great, if a little seen-it, done-it – in their basic format. I’ve got boss bounties, adventures and quests stacked up to tackle, plus new Crucible maps on the horizon and a whole new Raid. In short, Forsaken’s vast, making Warmind and Curse of Osiris look puny and even overshadowing The Taken King. And you know what? I couldn’t be happier. Right now, I just want more.

This isn’t a definitive verdict. There’s still a whole lot to do and see in Forsaken, and if we’ve learnt anything from Destiny 2 it’s that this is a game that changes and evolves – or sometimes fails to evolve – as you keep pushing through the endgame content. How many of us raved about Destiny 2 in the early days? Yet right now Forsaken seems to be taking Destiny in the right direction, giving us that killer combination of Halo and Diablo that we’ve always wanted.

Destiny is always going to have its haters, and so much comes down to how much you love the core action, the all-absorbing grind, the unmatched feel of the gunplay and your tools for wreaking havoc. But if you love those things, then buy Forsaken. It takes us straight back to the glory days of The Taken King.