There’s a kineticism to Spider-Man that Insomniac has somehow managed to imbue into Marvel’s Spider-Man for PS4. Making Spidey control like a sports car in three dimensions is the game’s crowning achievement, and you feel it while plowing through the city, and in every combat encounter.

Swing. Punch. Dodge. Every one of these actions sees Spider-Man’s entire body cascading through the air with tremendous momentum, which at first merely look like great animations, but later becomes something you can feel as you play. At top speed, Marvel’s Spider-Man is one of the best action brawlers of the year, rivalling even Rocksteady’s Batman series for the open-world superhero crown. However, too often it’s bogged down by its own ideas with forced stealth sequences and a few too many ideas that aren’t quite developed to completion. It’s when the pace dips that these problems become apparent.

Marvel’s Spider-Man is the game, narratively, that comic fans have been craving for decades. It’s been several years since Peter Parker first put on his tights, and the webhead is confident in his abilities, whizzing around the city with ease.

Hell, within the first ten minutes you are shown NYPD cops who trust Spider-Man, informed of the rogue’s gallery Spider-Man has already put away and you’re climbing Fisk’s skyscraper to bring him down. This isn’t a trick, the end of these first few sequences have you fighting Fisk and turning him over to the police. 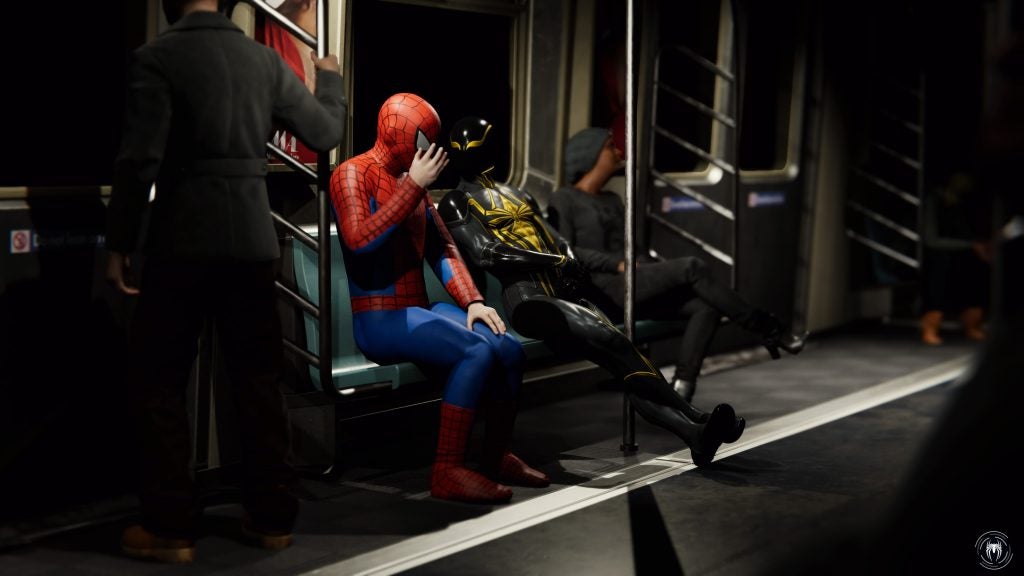 Meanwhile, J Jonah Jameson has graduated from his well-known role as the editor and publisher on newspaper The Daily Bugle and is now an Alex Jones-esque truther, spouting nonsensical half-truths about Spider-Man on a podcast, where the mere mention of the webhead is enough to send him into a foaming rant.

Spider-Man and his presence are established here. I immediately felt at home, exploring a world made up of chunks of our hero’s comic history, blended with a mix of deep cut locations like Josie’s Bar and big Marvel Cinematic Universe locations like the Strange Sanctorum and the Avengers Tower.

It doesn’t draw in too much of Spider-Man’s rogue gallery throughout the 20 hours of story, but it’s an entertaining comic book yarn, with plenty of surprises, the now comic-book standard post-credits scene (there are two, by the way) and an ending that leaves me looking forward to see what else Insomniac have planned for the universe.

Tonally, the game is enjoyably light, only dipping into a darker tone a few times during the game. The change can be jarring; it’s tonally a little odd to see our wisecracking hero at the helm and watching a terrorist atrocity.

The game works best as a light-hearted superhero romp, and I enjoyed the entire narrative from the slightly plodding opening hours to a taut final third. You can probably guess several of the plot points before they come to pass, but the story reaches them with gusto. 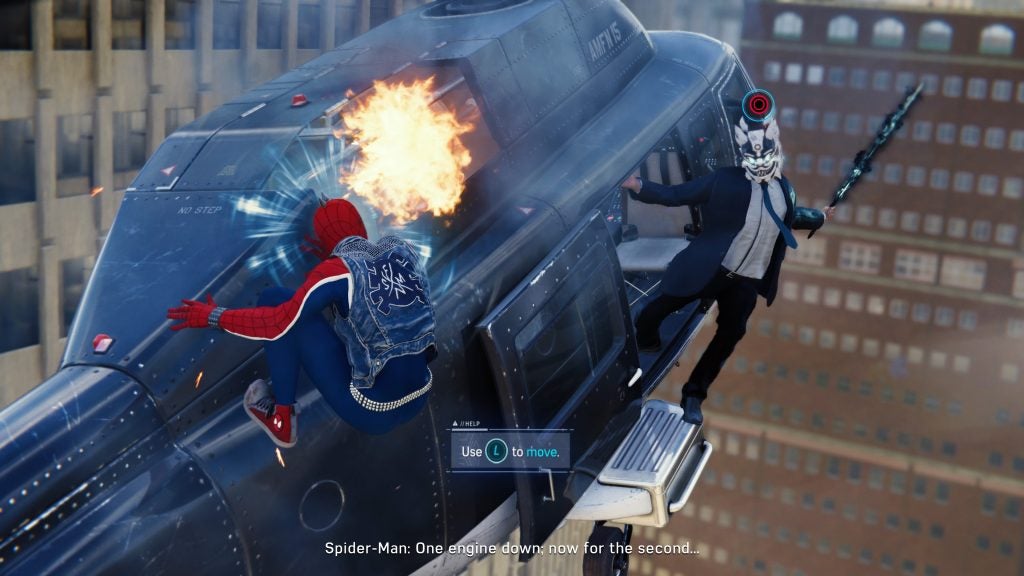 Peter, and by extension Spider-Man, have the same problems that we do. His rent is too expensive, he’s never on time for anything and he’s in an awkward relationship with his ex where even a simple text conversation is fraught with misunderstandings and anxiety. He’s human, and his interactions, quips and worries imbue the entire game with charm.

The best Peter Parker is one who is comfortable with his place in the world but struggling to make everything work, and it’s great to see him here: it humanises him as we go through an increasingly fantastical narrative. That’s important because with comic book heroes it’s never just about the hero, but the person wearing the spandex.

However, it’s when the game puts you in the shoes of regular civilians that things start to chug. The game has several playable characters, dropping you into them at different times to make you feel powerless. Often, this means a regrettable stealth segment, but it’s used to strong effect here in the aftermath of a brutal attack that caps off the first half, with players dumped into the shoes of a civilian trying to escape the atrocity.

While a couple of stealth segments are well done, mostly it just involves the player as Mary Jane skulking around behind cardboard boxes and soldiering on until the game lets you control Spidey again. Later, these stealth segments give you extra options, whether that involves distracting enemies with hacking, gadgets or even just getting Spider-Man to descend from the roof to battle your enemies. Thing is, watching Spider-Man do his thing isn’t as cool as getting to do it yourself.

Talking of cool stuff, combat in the game takes advantage of Spider-Man’s agility, letting you dodge and weave, taking enemies into the sky to pummel them, or sliding through their legs to leather them in the spine. Combat works best when you’re in the thick of it, hurtling enemies against each other and tossing gadgets — ranging through impact webbing to electric webs and concussive blasts — into the fray to try and carve yourself some breathing space. 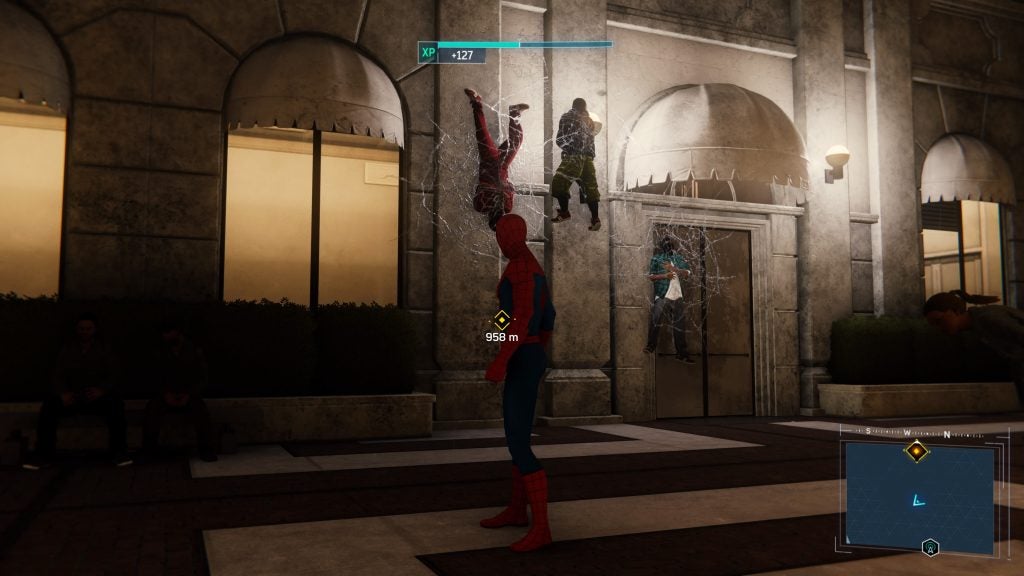 Webs are one of the most unique aspects, and they form the backbone of the game’s combat. After dodging an enemy, you can hit them in the back with impact webbing, sending them flying into a wall, trapped against it. Many of your fights will end with your enemies webbed to walls, ceilings, hanging upside down on the side of a city bus or the underside of a bridge.

There’s something uniquely Spider-Man about the whole thing, and it never fails to put a smile on my face when you throw a webbed up enemy off of a roof, and later find them stuck to the side of the building opposite, safe in their webby cocoon.

Because combat is so heavily influenced by the world around you, each fight feels fairly unique even if the building blocks are the same. Once you’ve fought in one alleyway, you’ve fought in them all, but there’s a pleasing variation to the fights that make them a joy to replay, which is a plus because you’re going to be knocking around a whole lot of goons over the course of the game.

Stealth plays a big part too, but the similarities to Batman’s Arkham Series mean it’s almost not worth going into detail. You flit around from perch to perch, hanging enemies up by their feet using your webs, or taking them out from afar with your gadgets. Here too, webbing up your enemies adds a unique element, but the stealth isn’t as well done here as in Batman, but the mechanics feel remarkably similar, which isn’t a great look when you consider the age of the game that it’s aping. Still, it’s Spider-Man, and it looks great, it’s just that stealth isn’t a particularly interesting option, compared to punching.

What Marvel’s Spider-Man does best is movement and I adore it. The swinging. The neat little web-zip you do to keep altitude. The giant jump you can pull off after you hit the ground and roll. This is Spider-Man’s city, and with some practice, it’ll be your city. Learning to get around is a treat, and when you master all of the overlapping systems, just traveling is a rewarding experience. About a third of the way into the game, a fast-travel system opens up. I used it twice. 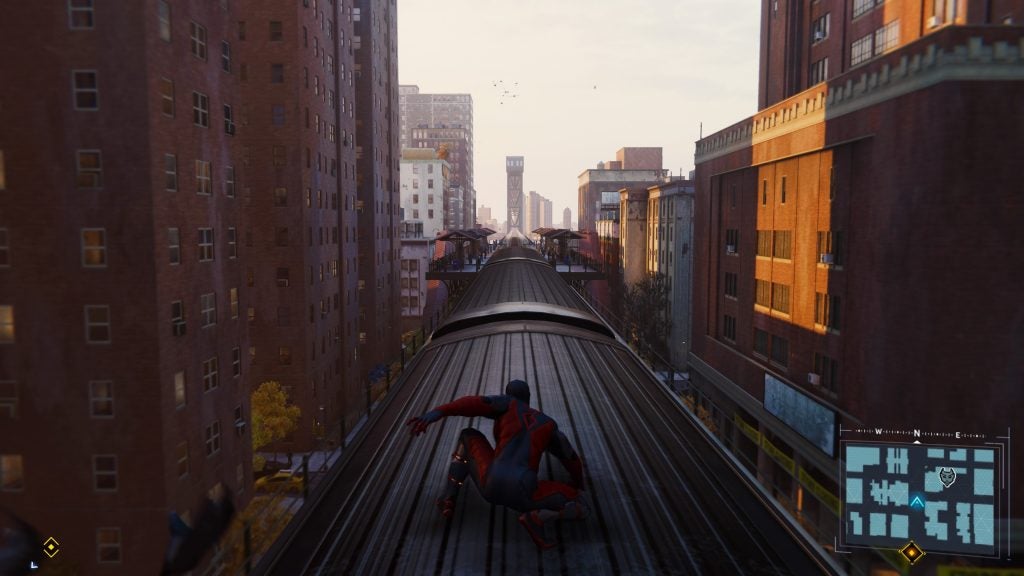 Whatever your playstyle there are a wealth of additional costumes for Spider-Man on offer, and in addition to some tremendous fan-service — hi, Scarlet Spider — they offer unique abilities to help you with things like traversal, combat or even just restocking your gadgets on the fly. The powers can make your fights feel like a real comic book experience, letting you become impervious to harm, deflect bullets back at your attackers, or letting out a burst of EMP to stun enemies and disable their weapons. I used several different abilities during my time with the game, and once you unlock the suit they ship with, you can use whichever works best for you, giving you a lot of freedom to play however you want.

Marvel’s Spider-Man has a surprising amount to say for itself and continues Sony’s run of best-in-show first party exclusives. Comic book fans will fall in love with Insomniac’s loving rendition of the webhead’s Manhattan, but fans expecting the next God of War might find themselves a little disappointed.

Still, there’s a lot to enjoy here. It’s uncomplicated fun, and it should deliver fun evenings defeating Spidey’s Rogue’s Gallery, exploring the city or even just pelting around at high speed hoovering up collectibles.