It’s time to get to Mars with the Destiny 2 Warmind DLC, which reintroduces the red planet alongside a series of new campaign missions and a host of other goodies. But is it worth your glimmer?

Warmind’s campaign centres around Rasputin, an ancient AI-developed by Clovis Bray during the golden age of humanity to defend the solar system from extra-terrestrial threats. Rasputin is old and cranky these days, and is as liable to incinerate a team of Guardians as he is to fight off an invading force.

You partner up with Ana Bray, a Guardian who’s delving into her past life. It’s an intriguing setup that touches upon an interesting piece of Destiny’s lore – Guardians were essentially just dead people that Ghosts latched onto and revived using the Traveler’s Light. A Guardian has no memory of their past life and they’re forbidden from digging into it – a rule that Ana Bray has flaunted.

Beyond that, the plot of Warmind is paint-by-numbers. An unspeakable ancient evil has emerged, this time one of the spins wheel Hive gods has awoken, and you must team up with Rasputin to stop it. I won’t spoil it for you, but the Hive god in question looks fantastic and the climatic battle against it is easily the high point of the DLC.

The Hive themselves have had a makeover to fit the frozen theme of the Martian polar region, but it’s largely cosmetic. Some Hive hit you with a frozen effect that slows your movement, but beyond that they’re just Hive with ice on them. 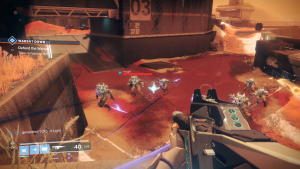 Start to finish, Warmind takes a couple of hours to complete – a little longer if you do all the optional adventure missions that are available on Mars. For those keeping track, this means that Warmind’s campaign is even shorter than the previous DLC, Curse of Osiris, which was already hammered for its lacklustre offering. I didn’t even realise I was on the final mission until the big baddy popped up out of nowhere for a final showdown, about five minutes after I’d first been introduced to them no less.

The campaign also leans heavily on a recycled gimmick from Destiny’s Wrath of the Machine DLC: the magical throwable MacGuffin. In Wrath of the Machine it was an axe; in Warmind it’s a javelin – but they’re functionally identical. At various points throughout the campaign, you’ll be faced with overwhelming numbers of enemies and a respawning javelin with which to clear them out. Given that Destiny 2’s strongpoint is its gunplay, hanging so much of the campaign on lobbing spears at mobs of Hive seems like a poor choice.

The Martian hub world is about the same size as Titan (the moon, not the player class), although much of it is filler space between two main areas of activity. It’s certainly a step up from Mercury in the last DLC – which had the same square footage as your average London studio flat – but it would have been nice to see something a little more substantial on the red planet.

I will offer a shout-out to the soundtrack, though. Destiny 2 already has some phenomenal ambient music and Warmind’s score for Mars is potentially the best yet. 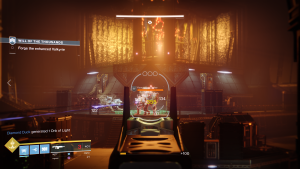 In addition to the campaign, Warmind also adds in two new strikes (three, if you’re playing on PlayStation). The words ‘two new strikes’ should be surrounded by enormous inverted commas, however, because they’re literally just two missions from the Warmind campaign, copy-pasted verbatim into a different playlist with the difficulty cranked up a notch.

While there’s certainly nothing wrong with Bungie making the most of the content it has on offer, advertising this DLC as containing a new campaign and two new strikes, only for these to be one and the same is cheeky at best and duplicitous at worst.

The other notable addition to the PvE activity list is the Escalation Protocol mode, a new public event on Mars that pits Guardians against waves of Hive, increasing in difficulty up to the crescendo of a final boss. There are multiple bosses that cycle on a weekly basis, each offering a change of a unique reward upon their defeat. Anyone who played the original Destiny’s Prison of Elders or Court of Oryx modes will be right at home here, although unlike the aforementioned modes, Escalation Protocol takes place within the main hub world of Mars, rather than in an isolated arena.

Exotics are one area that show huge improvement in Warmind. A major complaint in vanilla Destiny 2 was that Exotic weapons and armour didn’t feel all that special, with most of them offering relatively minor buffs. This has been remedied in Warmind, with existing Exotic weapons receiving a buff alongside a host of new additions. Almost every Exotic feels overpowered in its own way and its up to you to decide which type of overpowered you’d like to be. 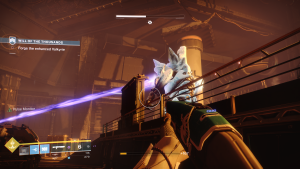 Among the Exotics are returning favourites from Destiny such as the legendary SUROS Regime, an assault rifle that does extra damage in the last half of its clip. These returnees are bolstered by new additions such as the Huckleberry, a rabid SMG that gets stronger when you punch people.

It’s early days yet, but the consensus among the community is that Warmind’s PvP is a massive step in the right direction. The changes to Exotic weapons have had the biggest impact on the meta, as previously useless weapons have been given a new lease of life. This has led to significant variation in viable weapon loadouts, even in the game’s most competitive mode, Trails of the Nine.

There remains a huge focus on teamwork, though (even in the casual modes), which will drive away new players looking to get their feet wet in Crucible without a full squad to roll with.

These improvements to the Crucible aren’t enough to save Warmind, however. A short campaign, mini-Raid, and recycled missions masquerading as Strikes wouldn’t be so bad if the saved effort was evident in other areas of this DLC – but this just isn’t the case.

I don’t know what’s going on behind the scenes at Bungie, but it’s certainly capable of better – as it’s already proved with the fantastic Taken King DLC for the original Destiny.

All in all, Warmind represents Bungie finally getting its PvP house in order after a rocky start, but this success comes at the cost of an underwhelming PvE offering. The campaign is a one-note run through a handful of missions that boil down to run here, kill dudes then throw a magic space javelin at more dudes for the big finale.

The Escalation mode and Raid-Lair are nice little additions, but Warmind really does offer staggeringly little for its price tag.