An excellent 11-channel AV amplifier that immerses you in multichannel sound, delivering a dynamic and highly enjoyable surround experience

The Denon AVC-X6500H is the latest mid-range AV amplifier from the company. It includes 11 channels of built-in amplification, and support for all three immersive audio formats: Dolby Atmos, DTS:X, and Auro-3D. Denon has dropped the built-in tuner, which is the reason this is an amplifier rather than a receiver, but there are plenty of other features that impress.

These include support for the HEOS multiroom system, and passthrough for 4K/60p, 4:4:4, and High Dynamic Range (HDR) – including Dolby Vision and Hybrid Log-Gamma. There’s also eARC (Enhanced Audio Return Channel), Alexa voice control, and IMAX Enhanced, which will be added via a future firmware update.

That’s a strong selection of bells and whistles, and thanks to some recent price reductions the X6500H won’t break the bank either, making it a potential bargain.

An 11-channel AV amplifier isn’t for everyone; there’s a commitment in terms of installing up to 11 speakers and possibly two subwoofers. However, if you’re thinking of going down this route then the X6500H should have everything you need in a single box.

The Denon AVC-X6500H has been given a minor facelift, but there’s no reinventing the wheel here; it still looks like a typical AV amplifier. There’s a large input dial on the left and an even bigger volume dial on the right.

In the middle is a large and reasonably informative display, with a drop-down flap beneath it. Behind this flap you’ll find some basic controls and a few extra connections, such as a second HDMI input, a USB port, and a headphone jack. 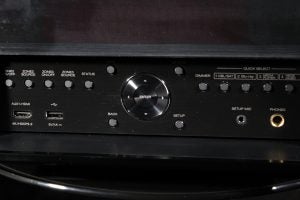 The X6500H is fairly big, as you’d expect for an 11-channel AV amplifier, but build quality is excellent and the chassis is well-engineered with a double-layered construction and a thick aluminium front panel.

The top has been reinforced, and the amp sits on high-density feet that add greater stability. It comes with an attractive brushed metal finish and the Denon is available in a choice of black or premium silver. 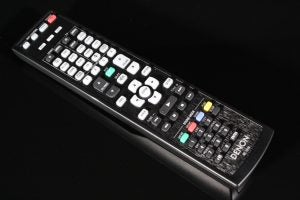 The included remote is well designed but lacks a backlight. Instead, there are phosphorescent buttons that glow in the dark. I still found them hard to locate when the lights were down, but at least they’re large and sensibly laid out, which makes the controller ergonomic in use.

If you don’t want to use the provided zapper, Denon also offers a remote app for both iOS and Android that includes all the controls you’ll need, making it an effective alternative. The remote app can also work in tandem with the HEOS multiroom app, allowing you to control everything from a single device.

The Denon AVC-X6500H is a feature-packed AV receiver that boasts 11 channels of built-in amplification that can deliver plenty of power. The amp can also decode 11.2-channels, with support for Dolby Atmos, DTS:X, and Auro-3D. That means it can handle speaker configurations up to 7.2.4 for Atmos and DTS:X, and 11.2 for Auro-3D.

The X6500H features the Audyssey MultEQ XT32 room-correction software, and comes with a dedicated setup microphone. This allows the software to analyse each speaker’s output and optimise the overall listening experience. In addition, there’s an optional app for those who want to tweak the setup beyond what you can do in the menus. 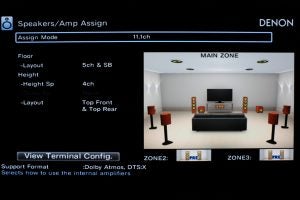 There’s support for the HEOS multiroom system, which means you can enjoy your favourite music anywhere – and everywhere – around your home. The system can be controlled using the free HEOS app and supports a wide range of streaming services including TuneIn, Internet Radio, Spotify Connect, Soundcloud, Tidal, Napster and Deezer.

The final new feature is IMAX Enhanced, which will be added via a firmware update in February 2019. This supports recently announced IMAX Enhanced 4K Blu-rays, which are designed to deliver the best possible picture and sound. The discs include new sound mixes specially created by IMAX and delivered using DTS:X, which the X6500H will be able to decode and play back.

Related: What is Apple AirPlay 2? 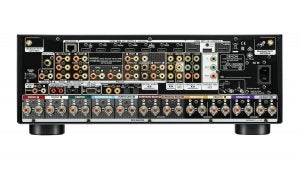 There’s no shortage of connections, with seven HDMI inputs and three HDMI outputs, one of which supports Enhanced Audio Return Channel (eARC). This is a new feature that allows lossless audio to be sent back via HDMI from compatible TVs.

There are four composite and two component video inputs, along with outputs for both, digital audio inputs (two optical and two coaxial), six analogue stereo inputs, a grounded phono input for a turntable, and a Denon Link HD connector. 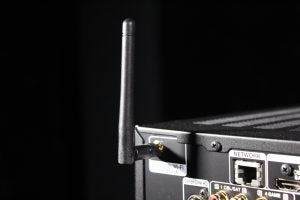 The amp includes an Ethernet port for a wired connection, but there’s also a dual antenna system for Bluetooth and Wi-Fi (dual band 2.4GHz/5GHz), as well as Apple AirPlay 2.

The X6500H has 11.2 channels of pre-outs, allowing you to connect two subwoofers and even attach outboard amplification if you want to use it as an AV processor instead. There are 11 pairs of speaker binding posts for the built-in amplification, and you can even assign different configuration options for that amplification.

All the terminals are gold-plated, and the binding posts are presented in a single line with colour-coding, to make wiring up speakers easier.

The Denon AVC-X6500H might appear intimidating but as the previous section makes clear, it’s incredibly flexible in terms of installation and offers a number of different configurations. However, it’s also very easy to set up, thanks to an excellent wizard that takes you through the entire process step-by-step.

You don’t need to start with the full 7.2.4-channel setup of which the amp is capable; you can start with what you have in terms of speakers and subs, and then build from there. It’s simply a case of reconfiguring the X6500H to suit any speakers you add to your system. 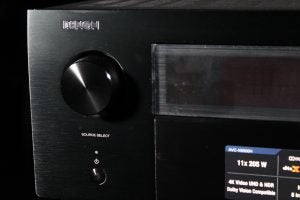 It’s definitely worth taking the time to set up the X6500H properly – because you’ll be rewarded with a superb level of performance. Unusually for an AV amplifier, the Denon sounds superb with two-channel audio, delivering a lovely sound when it comes to music. The Memphis recordings of Primal Scream’s Give Out but Don’t Give Up sounded wonderful, with an urgency to the rockier tracks and a soulfulness to the ballads.

This is important, because the X6500 forms part of the HEOS multi-room system, thus allowing you to not only listen to music via the amp, but also to send anything connected to it back to any other HEOS speaker in the system. If you switch to multichannel music, the results are just as impressive, and the new 5.1-channel mix of Appetite for Destruction by Guns ’n’ Roses sounds appropriately dynamic.

Of course, if you’re investing in an amplifier such as the X6500H and are going to all the trouble of fitting speakers around the living room, then what you’re really interested in is movie soundtracks. If so, you won’t be disappointed. The Denon is a stellar performer in this regard, immersing you in a whirlwind of multichannel delights.

I started with the first X-Men film, which has an excellent 5.1 DTS-HD Master Audio soundtrack. The X6500H took that soundtrack and spun it into an entirely satisfying multichannel experience, steering effects around the room with precision, and delivering some deep bass. The dialogue was always clear and focused, while the front soundstage gave the score a real sense of scale.

If you do decide to install overhead channels, either by using upward-firing Dolby Atmos speakers or by actually putting speakers on the ceiling, then you’ll probably want to make full use of them. If so there’s good news: the X6500H includes the Dolby Surround and DTS Neural:X upmixing algorithms.

These actually work really well, taking audio cues from existing 5.1/6.1/7.1 soundtracks and allocating them to the overhead channels to create a more immersive experience. I can’t say I have a particular preference – both algorithms are excellent – but there were times when I’d have sworn I was listening to a genuine immersive audio soundtrack.

Of course, if you want to get the most from your X6500H then you should be watching movies that have these genuine immersive audio soundtracks. The Denon supports all three formats, but in reality there’s very little content available in Auro-3D and the format uses an entirely different speaker configuration compared to Atmos and DTS:X. So for the purposes of this review, I only tested the latter two. 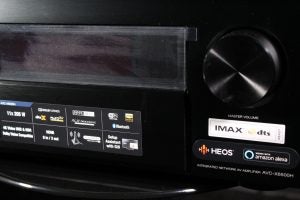 When you do send the X6500H a Dolby Atmos soundtrack, it really gets a chance to shine – and an excellent mix such as Ready Player One is the perfect way to demonstrate that. This film has a highly active soundtrack, which makes full use of all the speakers, including the overheads.

A good example is the opening race, where you have sounds coming from every direction, including above. Yet within this cacophony of effects, dialogue always retained a pleasing clarity. There was also plenty of bass action, especially when King Kong makes an appearance.

The X6500H’s ability to steer effects through three-dimensional space was best demonstrated in a specific scene in Sicario 2: Soldado. As Josh Brolin’s character walks towards a helicopter, the sound of its rover blades is initially heard behind you, before moving along the right-hand wall and then above you – matching Brolin’s movements as he boards the helicopter. Impressive stuff, and exactly the kind of effect that someone investing in a 7.2.4 system is looking for.

This amp is just as adept when it comes to DTS:X soundtracks. Watching Harry Potter and the Prisoner of Azkaban, I was impressed by the dynamism of the amplifier’s performance. There were some big low-end bumps as the Hogwort’s Express lurches to a halt and the dementors search the train. The sound of freezing air fills the train compartment, giving the scene a palpable sense of dread.

My only complaint is that the X6500H lacks the raw grunt of some larger AV receivers and amplifiers. Thus when you’re driving all 11 channels, the sound can feel a little constrained – although you’d need to hit some fairly unsociable volume levels to really notice, and for most people the Denon has more than enough power.

The Denon AVC-X6500H is an excellent AV amplifier that’s attractively designed, well made, and boasts just about every feature imaginable. It not only supports all the immersive audio formats, but also includes multi-room capabilities and even voice control.

Despite its inherent complexity, it’s actually quite simple to set up and you can even run Audyssey room correction using an included microphone. There’s a well-designed controller and a highly effective remote app, making the amp as easy to use as it is to set up.

Performance is exemplary, with the amplifier sounding great with two-channel music, multichannel soundtracks, and fully immersive object-based audio. The fact that it can do all of this from a single box makes it all the more appealing.

There’s little to complain about here, aside from perhaps a slight lack of power when running all 11 channels simultaneously. An AV amplifier isn’t for everyone – a soundbar is certainly cheaper and easier – but the X6500H delivers the best sound quality and the most features of any amp you’ll find at this price, and it does so from a single box.

This excellent 11-channel AV amplifier can immerse you in multichannel sound, delivering a dynamic and highly enjoyable surround experience. It’s feature-packed, flexible in terms of configuration, and easy to set up. Thanks to some recent price drops it’s also a bit of a bargain, making it a hard-to-resist single-box solution.

Steve Withers
Steve Withers is a professional calibrator and freelance journalist who regularly contributes to Trusted Reviews, reviewing audio and video products, and writing articles. Steve has been writing about…