The Dell XPS 13 (11th Gen) is more powerful and battery-efficient than its predecessor thanks to the move to Intel’s Tiger Lake processors, cementing its place as the absolute best Windows Ultrabook you can currently buy.

The Dell XPS 13 (Intel 11th Gen) is the latest and greatest entry in a laptop series that has reigned supreme for the past few years.

Dell has updated its flagship portable at every opportunity possible to ensure it remains the absolute best laptop for day-to-day tasks. This time round, it’s the processor that’s seen an upgrade, with the latest XPS 13 (launched in Q4 2020) being among the first laptops to take advantage of Intel’s 11th Gen processors.

Not only does this chip boost speeds for browsing the web and running apps, but it also features upgraded graphics power to run the likes of Fortnite and Adobe Premiere Pro while seeing improved battery efficiency.

Add the jaw-dropping style, compact design and colourful screen to the mix and you have yourself a laptop that’s the closest I’ve ever seen to achieving perfection.

The Dell XPS 13 (Intel 11th Gen) is currently available on the official Dell website, with the model I have for review priced at £1849/$1549 and featuring an Intel Core i7-1165G7 CPU, 16GB of RAM and a 4K display. This is a high-end configuration, so you can sacrifice performance power to reduce the price if needed.

In the UK, the cheapest model available costs £1399, featuring an Intel Core i5-1135G7 CPU, 8GB of RAM, Full HD display and a 512GB SSD. Over in the US, you can drive down the price even further thanks to a greater choice of configurations. For $999, you can bag yourself a model with an Intel Core i3-1115G4 processor, 8GB of RAM, Full HD display and 256GB SSD.

It’s a shame the UK doesn’t have the same configuration flexibility, but the older Dell XPS 13 (2020) laptop featuring Intel Core i5-10210U is still available with a more affordable £1099 starting price.

Design and keyboard – The best-looking laptop you can buy

The luxurious quality of the Dell XPS 13 is obvious on opening the box, with the shiny silver aluminium lid catching the eye immediately. The bundled USB-C adapter and power charger are neatly presented in bamboo packaging trays, too.

When lifting the laptop out of the box, I’m reminded of how stunningly thin this portable is, with it measuring in at a super-slender 14.8mm. And that’s the max height of the laptop, with the rim’s width decreasing further as it approaches the deck’s bottom lip. It really is a thing of beauty. 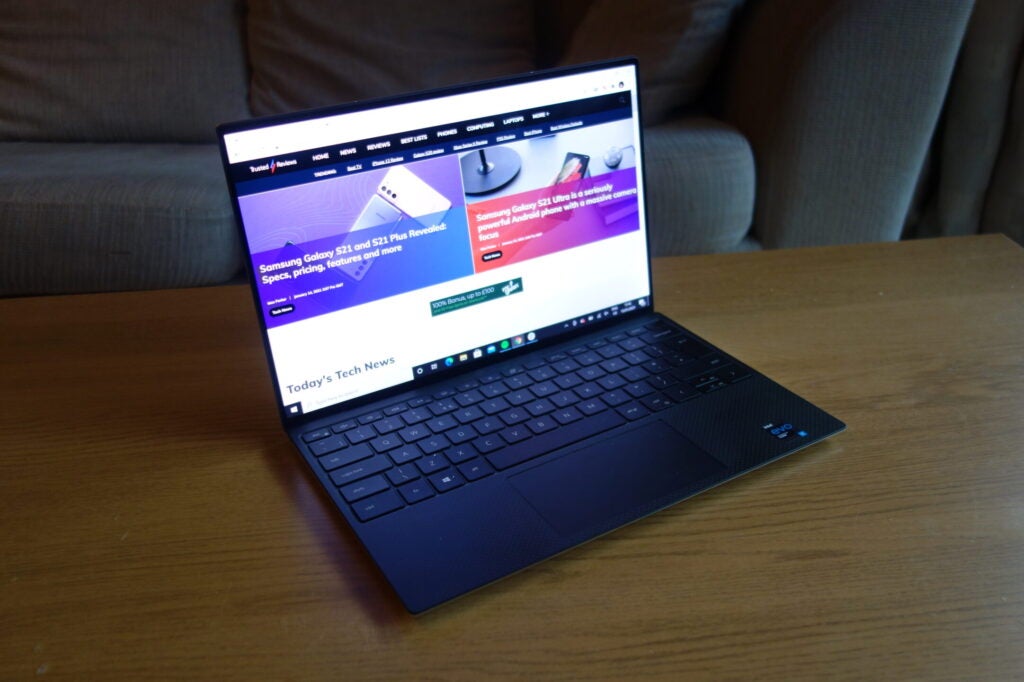 Open up the laptop, and you’ll be even more impressed by the edge-to-edge 16:10 screen, which has near-enough eradicated the bezel that typically surrounds a laptop screen. I’ve seen this exact design before with the preceding Dell XPS 13 (2020) model, but the visual appeal of this laptop hasn’t worn off one bit – this is easily the best-looking laptop available.

Despite having a silver lid, the laptop’s interior sees a patterned black palm-rest. Opting for two complementing colours, rather than the typical unibody paint job, helps the XPS 13 to stand out among its rivals while rocking some stylish charm. Dell is also offering an all-white model, but I prefer the Platinum Silver version on review.

With a starting weight of 1.2kg (the touchscreen model weighs 1.27kg), you’ll find lighter laptops such as the Acer Swift 5 (2020) – but I’m still able to pick up the XPS 13 in one hand without issue. It’s small enough to effortlessly slot inside a bag, too, making it an ideal option for on-the-go workers. 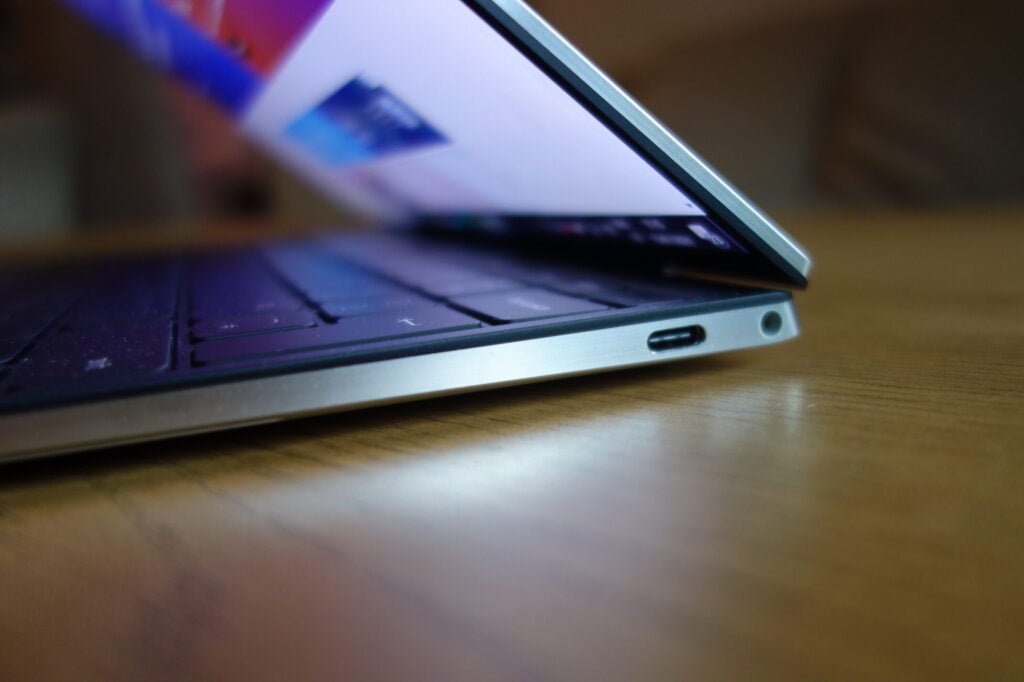 The biggest drawback of having such a slender frame is the lack of ports. The Dell XPS 13 features two Thunderbolt 4, microSD and a headphone jack, which is one of the most stingiest offerings I’ve seen on a laptop. Dell at least bundles a USB-C to USB-A adapter in the box, but I still found it a big inconvenience, especially if you like to use a USB mouse regularly.

Dell nails the keyboard, with a crunchy feel that doesn’t make a lot of noise. If I’m being overly picky, I’m not fond of the arrow keys being reduced in size, but I’ve seen this replicated by the majority of laptop manufacturers in recent times, so I can give Dell a pass.

A fingerprint reader is integrated into the power button on the top-right corner of the keyboard, requiring a gentle tap for it to recognise your print and log you into the laptop. It worked flawlessly for me every time, and it’s a far more convenient alternative to entering a password. 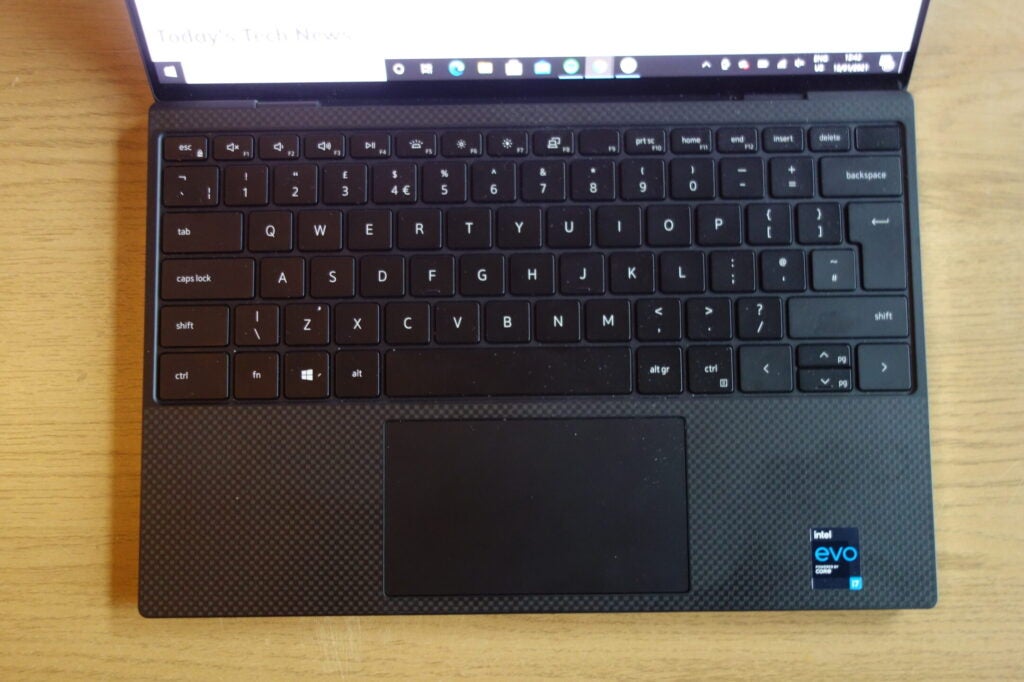 The trackpad is smooth and responsive, and Dell has increased its size by 17% for more comfortable swiping. I can successfully press down on the trackpad anywhere I please, with an audible click affirming the input.

Despite the bezel being so slender, Dell has managed to fit in a webcam above the screen. The 720p quality of the camera is absolutely fine, but it’s no better or worse than a typical laptop webcam.

Screen – One of the best Windows displays in the business

The Dell XPS 13 has an outstanding display whether you opt for its Full HD or 4K configurations. Dell sent in the 4K touchscreen model for review and it looks gorgeous, with Netflix videos packing an extra punch and even the homescreen showcasing impressive detail.

I watched an episode of Bridgerton on the Dell XPS 13, and it looked wonderful with all the pastel furnishings standing out from the background. There were no ugly pixilation effects either, which can occur with cheaper laptops. 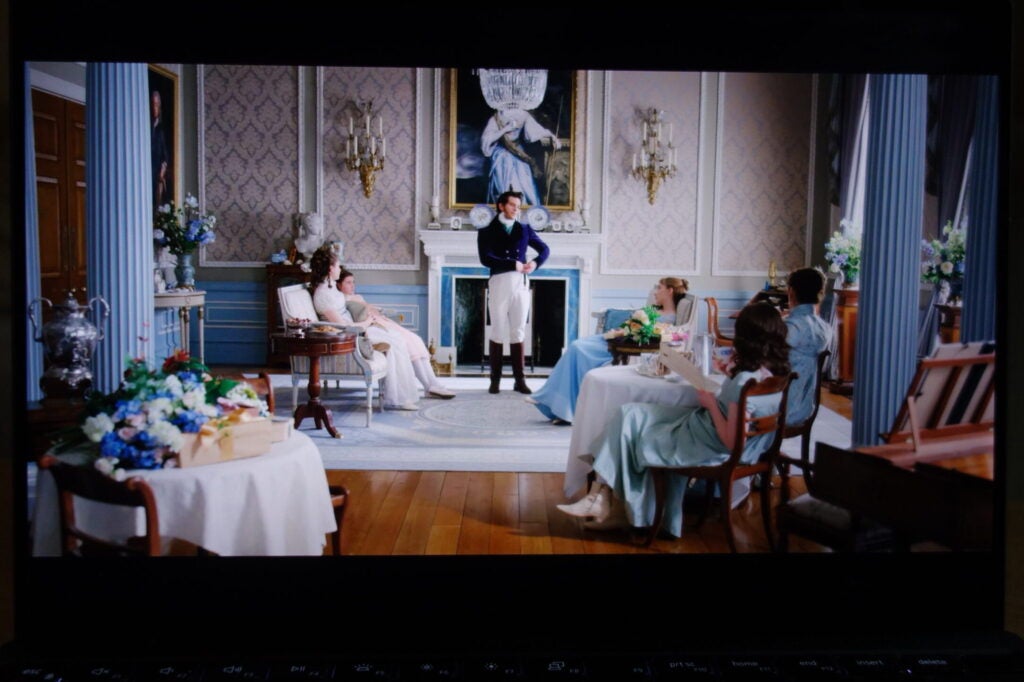 It isn’t just the extra pixels that make the XPS 13 screen shine. I used a colorimeter to test the screen’s peak brightness, contrast and colour accuracy, and Dell knocked it out of the park in every benchmark.

I recorded a 550-nit brightness on the Dell XPS 13, which is far beyond the average 300-nit figure. This not only means I can use the XPS in bright sunlight without issue, but it also makes colours appear more vibrant thanks to the high 1707:1 contrast.

With 100% sRGB and 83% DCI-P3 colour space coverage, the Dell display is also fantastic at accurately presenting colours as they would look in real life, whether you’re tweaking photos on PhotoShop or checking out Instagram snaps. This makes the XPS 13 an ideal laptop for professional-grade photo/video work, although the graphics performance is limited compared to the likes of the 16-inch MacBook Pro.

By far the biggest upgrade for the Dell XPS 13 is the new Intel Core 11th Generation (aka Tiger Lake) processor.

I’ve been sent the Intel Core i7-1165G7 configuration for review and have so compared it to the older XPS 13 model with an Intel Core i7-1065G7 chip. I ran multiple CPU benchmark tests (PCMark and Geekbench 5) to get an idea of how powerful each laptop is, and the results show a big leap in performance.

But how does that translate to real-world performance? For day-to-day tasks such as browsing the web, streaming video and writing up documents, I didn’t notice a difference. Both laptop models are comfortably powerful enough to breeze through productivity tasks without issue.

The added CPU performance is only beneficial if you’re engaging in more intensive tasks such as editing video or running multiple apps in the background. And if you’re craving that calibre of performance, it’s worth considering the MacBook Air M1 instead, which leapfrogged the Dell’s Geekbench results. Unfortunately, we were unable to run all of our benchmark tests on the MacBook Air due to the limitations of macOS.

So, if you want a new Dell XPS 13 for just day-to-day tasks, is there any reason to opt for the new Tiger Lake model? Absolutely, since it not only features high CPU speeds but it also boasts the powerful Iris Xe integrated graphics.

This means you can play video games without the need for a discrete graphics card. Don’t expect to be playing the likes of CyberPunk 2077, but I was able to run Dirt Rally and Apex Legends at 1080p resolution and with an average performance of 34fps and 40fps respectively. Reducing the resolution will ensure an even smoother performance.

There are some caveats here, though. Intel’s graphics drivers are yet to reach the same standard as those from AMD and Nvidia, so I encountered issues with select games. Cities: Skylines crashed just a few minutes into a new game, for example. The XPS 13 is best suited to running eSports games such as Fortnite, Apex Legends and Valorant, as well as less demanding indie titles. 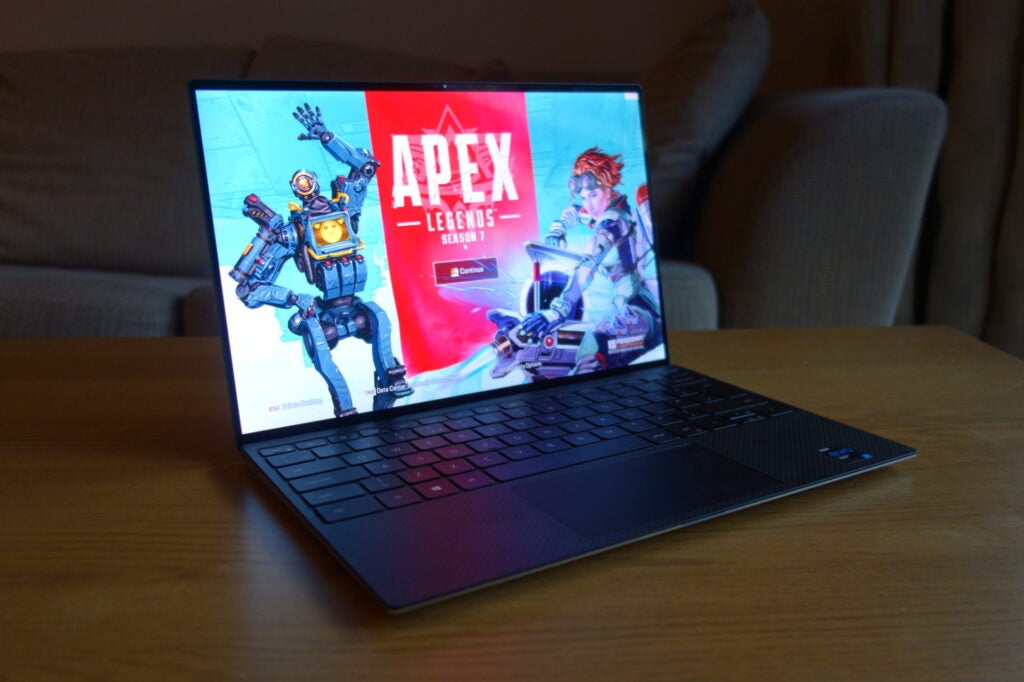 It’s important to remember the Dell XPS 13 isn’t a gaming laptop, so I certainly wouldn’t recommend it if gaming is your priority. But if you want a slick productivity portable that’s capable of light gaming on the side, then the newest XPS 13 is a superb option.

I’m also impressed with the Dell’s supremely fast read and write speeds, hitting 3290MB/s and 2926MB/s respectively, which are pretty much the best you can expect from an Ultrabook. This means the XPS 13 is very quick at loading and saving data on the physical drive. I found this advantageous when transferring photos to the laptop; they flashed up in the folder in a matter of seconds.

One of my biggest gripes of modern-day laptops is battery life, with many high-end Ultrabooks failing to hit the 10-hour mark. With plugs sometimes sparse in an office or university lecture hall, having such a short battery life can make your laptop as useful as a paperweight.

Fortunately, the new Intel Tiger Lake chip brings a boost to battery efficiency as well as performance. Using a PCMark battery benchmark test to simulate a day in the office, the Dell XPS 13 (Intel 11th Gen) lasted 9hrs 52mins before requiring a recharge. I saw similar results when using the XPS as my work laptop throughout the day. 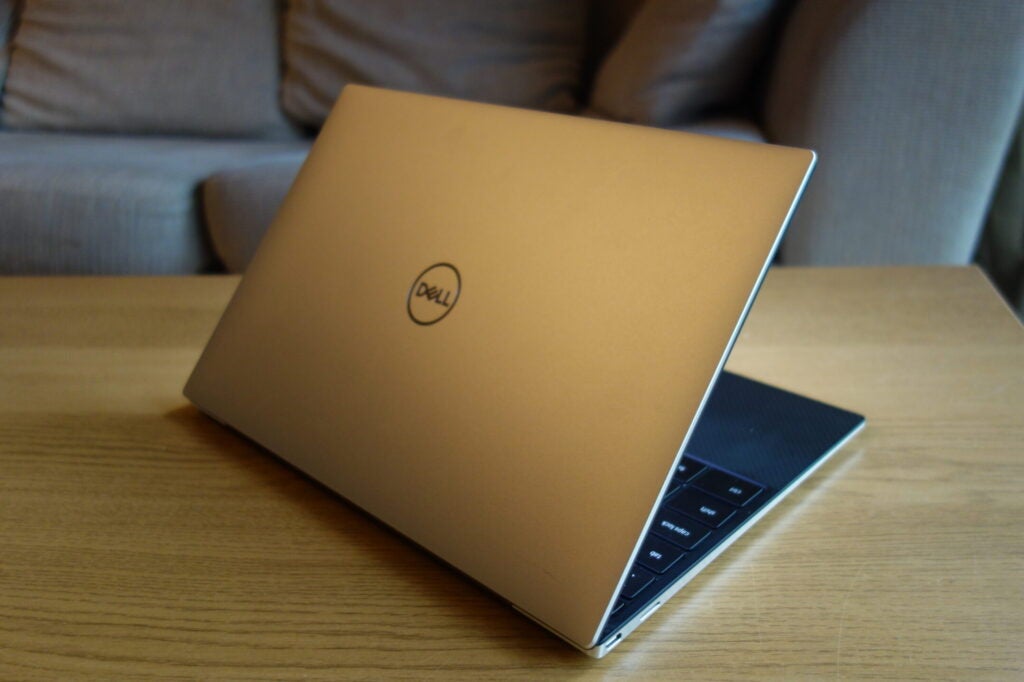 That’s a substantial improvement on the preceding XPS 13 laptop generation, which managed only six hours in a similar test.

It’s worth remembering these test results are for the 4K configurations of the XPS 13. You can expect an even longer battery life if you opt for the Full HD model, although I’m not convinced it will reach Dell’s quoted 19 hours.

I also recorded the new XPS 13’s recharge time: it took a fairly lengthy 2hrs 30mins to fully replenish the 4-cell, 52 WHr unit. On the plus side it charges via USB-C, so you can use the bundled power adapter to charge your Android smartphone and Nintendo Switch, for example.