Valorant is one of the best tactical shooters in recent memory, featuring superb precision gunplay and an expansive class system for an abundance of depth. With ruthless headshot damage, accuracy proves more important than rival online shooters which may put off casual players. But for those looking for a challenge in an ultra-competitive setting, Valorant is essential – especially since it’s free to play.

Valorant is a new free-to-play tactical shooter, taking the pinpoint gunplay and claustrophobic maps from Counter-Strike and layering on top an Overwatch-style character class system for oodles of charm and replayability.

With Overwatch and Apex Legends previously reaping the rewards from such an approach, the character class system is by no means exclusive to Valorant. But by integrating it into such an intense first-person shooter where precision gunplay and tactical consideration rules the roost, Valorant ends up feeling uniquely appealing.

Created by Riot Games – the same studio behind League of Legends – it’s blatantly obvious that Valorant has been designed to appeal to the eSports crowd. There are no loot crates or random in-game events here to even the odds, with weapon accuracy being the single most important skill. 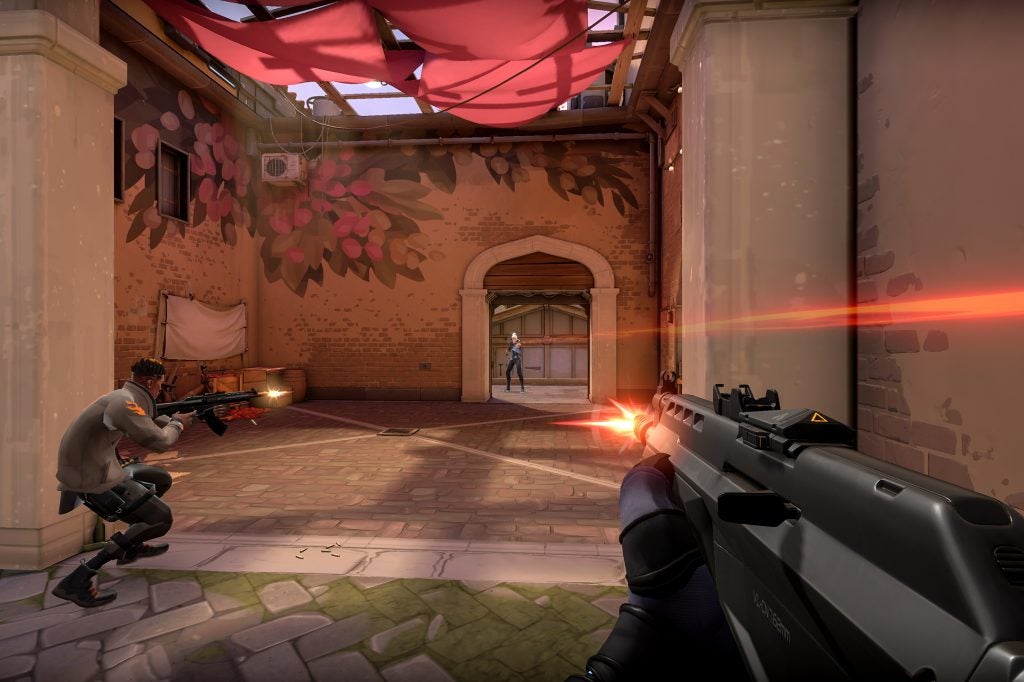 Well-placed headshots can down foes instantly, even if they’re wearing heavy armour. While games such as Fortnite and Apex Legends allow low-skilled players a bit of leeway if they amass a collection of high-spec gear, Valorant is far more ruthless. This can prove very frustrating for those lacking accurate and speedy responses, but anyone relishing an intense challenge will find it here in spades.

Before each round, players are allowed a brief window to purchase guns with in-game credits. You’ll earn more credits in each round, but death will wipe out all of your gear. This means you’ll have to decide how evenly you should spread your spending across the 24 rounds, with item management proving an important consideration.

There’s a huge arsenal of weapons to pick from, including pistols, shotguns, SMGs, assault rifles and snipers. No gun feels drastically over powered, each featuring its own strengths and weaknesses. Shotguns may allow players to be less precise in their aiming, but they prove ineffective in long, twisting alleys. And while sniper rifles can kill from range, the labyrinth-esque setup of every map means you can never be sure whether an enemy will flank you from behind.

Every gun feels great to use, with crunchy sprays of bullets feeling incredibly satisfying when knocking down opponents. Controls feel pinpoint accurate too, so you’ve only got yourself to blame if you lose a one-on-one encounter. 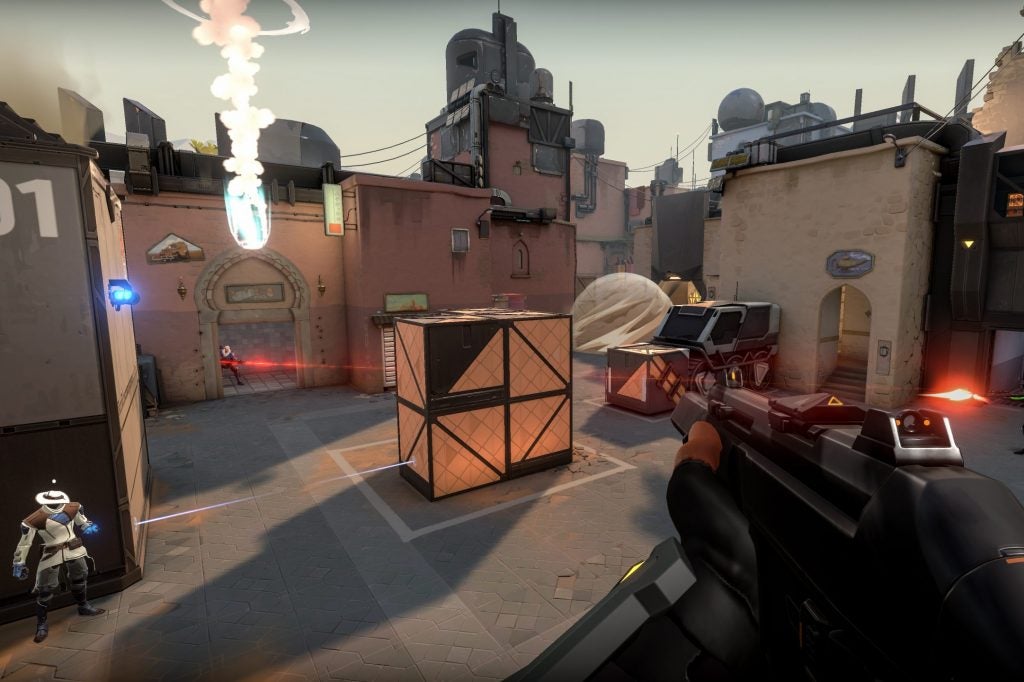 And then we have the character classes, ranging from the fire-ball tossing Phoenix who can summon walls of flames to the battlefield, to the swift-footed Jett who can propel herself into the air and hurl deadly throwing knives.

There are already 11 so-called agents to choose from, each flaunting varied and enjoyable special moves. But while the likes of vision-blocking whirlwinds and enemy-tagging security cameras can certainly give you an edge in fights, they’re rarely powerful enough to make up for poor aiming.

Most of your abilities need to be replenished with in-game credits too, so if you keep spamming an expensive move, you probably won’t be able to afford armour or weapons beyond a basic pistol in later rounds.

Select agents have to be unlocked for competitive use, but this simply requires you to play multiple rounds rather than being forced to pay real-world cash. The unlockable agents don’t seem any more powerful than the default characters too, although I have seen signs of an unbalanced roster. 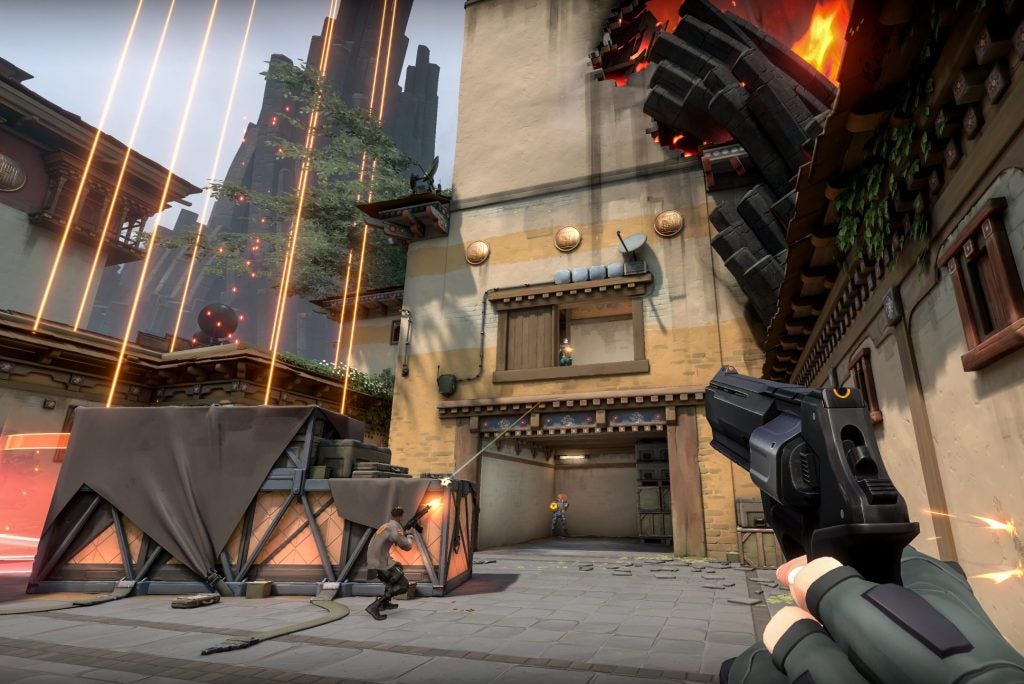 The medic character Sage seems to top leaderboards more often than not, with her healing and resurrection powers seeming unfairly advantageous. This isn’t something to be concerned about though, as this is a typical element Riot Games will watch out for and could easily fix via a future patch. Plus, with five characters lining up for each team, it’s more than likely that both sides will feature the overpowered classes.

Teamwork is essential for success in Valorant, with Riot Games ensuring various character abilities can synergise for some outstanding results. For example, the archer Sova can fire a recon bolt that detects out-of-sight enemies, while Breach can emit a disorientating blast through a wall. Pulling off such strategies isn’t so easy though, especially if you’re playing with strangers without voice chat.

When playing by myself, I’ve been very frustrated with teammates who charge off alone or ignore the ‘plant the bomb’ main objective in favour of a fruitless killing spree. I’ve also seen players frequently drop out after a few rounds, leaving your team at a major disadvantage for the rest of the game. Valorant definitely feels best played in a squad of five, but finding four friends to play is easier said than done. 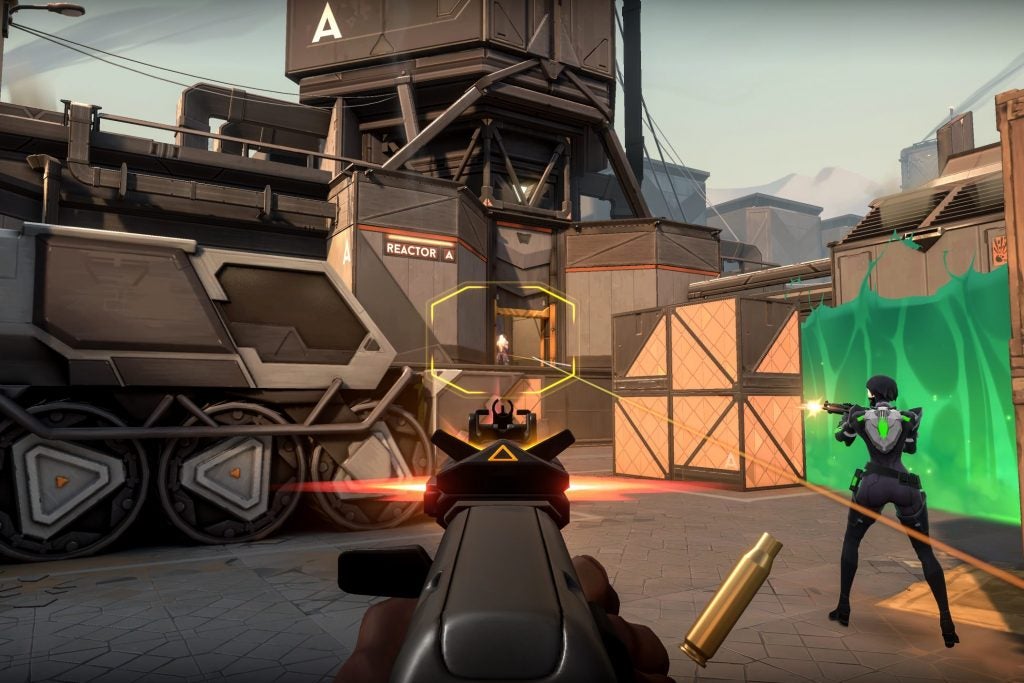 A new mode called Spike Rush at least makes the game that little bit more accessible, with shorter game sessions, randomised guns and more charges for special abilities ensuring more chaotic fights where teamwork isn’t quite as important. A Custom Game option also allows you to pick the map, game mode and whether cheats are allowed, proving a good option if you’ve got a group of friends to mess around with.

I’m hoping Riot Games will introduce a few more maps and game modes, as the potential Valorant has to offer is staggering. This will, of course, depend on how much money the game is able to make.

Valorant uses a similar pay model to Fortnite, being free to play but offering players the opportunity to use real-life cash to unlock skins and cosmetics. The cosmetics on offer seem limited so far, but it’s still enticing to add a splash of colour to the bland, black default styling. Since all payments can only unlock cosmetics, Valorant can’t be accused of being ‘pay to win’. I’m not a big fan of the menu systems though, with the character roster and weapon skins somewhat confusing to navigate. The presentation is excellent during gameplay though. The shop menu at the start of each round is rife with imagery and labels so you can quickly pick the best gun for your play style.

The art style is gorgeous too, with Riot Games opting for a cartoonish style reminiscent of Team Fortress 2, which is no surprise since Valve’s former art and character designer has taken the role of art director for Valorant.

Audio effects and voice acting is also superb, giving the huge roster of characters distinctive personalities with their witty remarks ahead of a scrape. There’s a great range of characters here too, with Riot Games ensuring a decent mix of nationalities for an inclusive experience.

Valorant is a fantastic new entry to the tactical shooter genre, combining popular features from the likes of Counter-Strike and Overwatch for one of the most engrossing competitive sharpshooters yet.

But with headshots almost always proving fatal and a lack of random loot evening the odds, Valorant offers no mercy for unskilled players. If you’re not a talented marksman, you may come away frustrated at the seemingly impenetrable difficulty, even with the implementation of character class systems and special abilities.

For the eSports arena though, Valorant looks set to make a huge impact. Anyone looking for a challenge will have endless fun here, with the huge roster of characters, excellent gunplay and potential futures updates likely ensuring a very long lifespan.