The Acer Swift 5 is a great Ultrabook for those who want to work on the move thanks to a lightweight design, stellar battery life and competitive performance. However, concerns over the build quality may convince you to spend extra for a Dell XPS laptop, or move over to the MacBook Air

The Acer Swift 5 is an ultrabook so light that I wouldn’t be shocked to see a balloon lift it up into the heavens.

The appeal of the Swift 5 is clear and obvious; it excels as a laptop for on-the-go work, or as a device that’s easy to transport to the office or your university lecture hall.

But portability isn’t the Swift 5’s only strength. It comes packing impressive performance thanks to Intel’s 11th-generation processors, offers incredible battery life, and is available for a very reasonable £999.99. Factor all of the above, and the Acer Swift 5 is comfortably one of the best laptops you can buy for those whom portability is a priority.

The processor can be upgraded to an Intel Core i7-1165G7, while the storage can be beefed up to a generous 1TB. There’s even a model packing Nvidia’s GeForce MX350 discrete GPU, costing £1299.99, which is still reasonable considering the specs.

As soon as I picked up the Acer Swift 5, I couldn’t help but gawp at how light it is. I could comfortably hold it with one hand without any strain on my wrist, with the laptop having noticeably less heft than rivals such as the Dell XPS 13, MacBook Air and Razer Book 13.

Presenting such a lightweight build is hardly a shock – the Acer Swift has pulled the same party trick for years now. Nevertheless, this laptop remains impressive, for the fact that Acer has managed to retained such a portable design despite packing in the latest hardware, such as Intel’s 11th-generation processor. 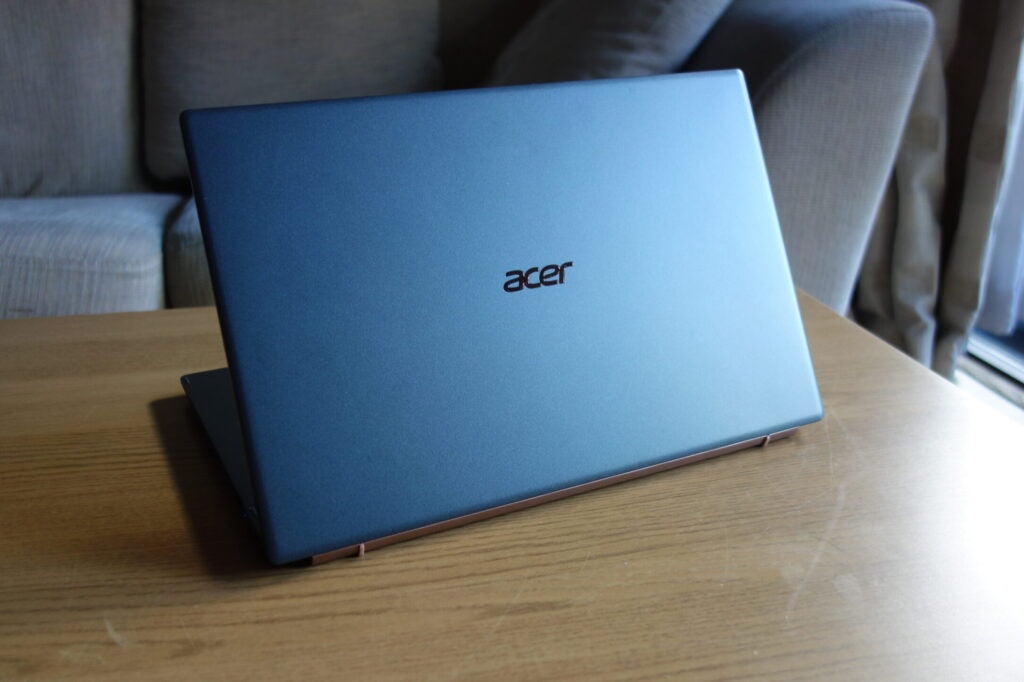 Build quality is okay, with the screen resistant to flex and the magnesium aluminium chassis feeling classy. However, the base of the laptop and the bottom of the keyboard seem a little fragile, as they indent slightly when I push down. I’d be concerned over whether the Acer Swift 5’s internal components would survive if the laptop was dropped from a reasonable height.

Aesthetically, the Acer Swift 5 looks great, with the Mist Green and Safari Gold colour options making it far more appealing to the eye than the generic silvers and blacks seen elsewhere. The rose gold hinge at the laptop’s rear looks stylish, too, while also elevating the device’s base off the desk to improve airflow.

The Swift 5 comes with a decent offering of ports as well, with two USB-A, a USB-C (Thunderbolt 4), HDMI and a headphone jack. The only thing you’re missing here is an SD card reader; nevertheless, it still arrives with a better selection than that found on some of the very best laptops. 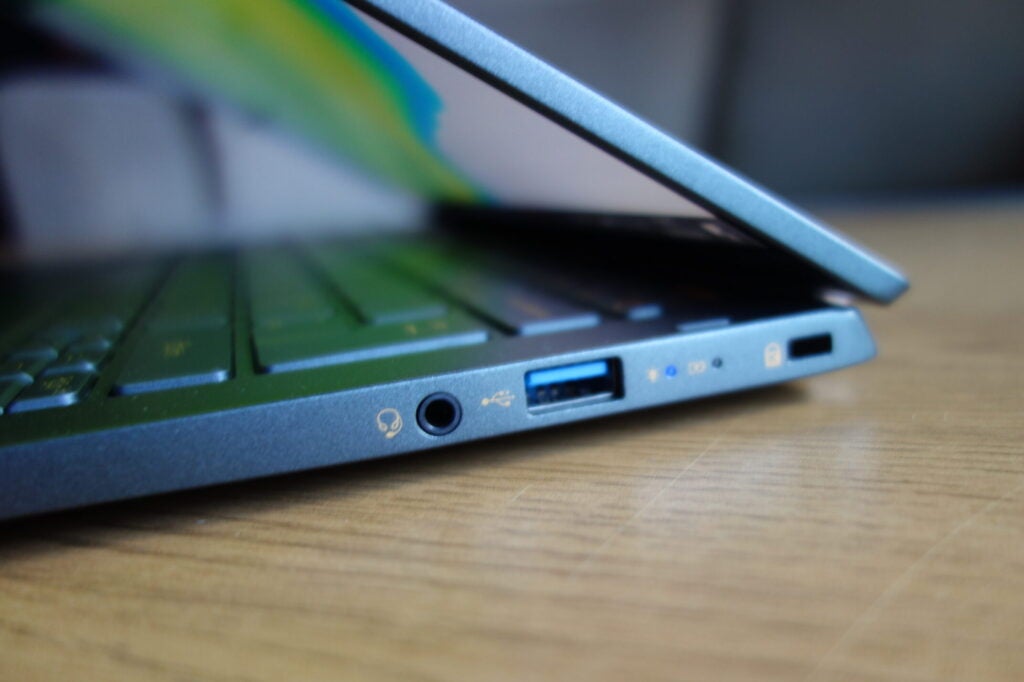 While most laptops are using USB-C for charging duties these days, Acer bundles a proprietary charger that feels a little outdated. That said, it is still possible to charge up the laptop via a USB-C charger.

A webcam is nestled in the screen’s top bezel, and offers acceptable video quality. It’s a bit fuzzy, but if you’re simply using the camera for work meetings and friendly catch-ups, it’s passable.

The keyboard is solid, with chunky keys offering decent travel and an overall comfortable typing experience. There’s a bit of a clack to each key when typing, which could become annoying in a shared working space, although softer presses will reduce the noise significantly. 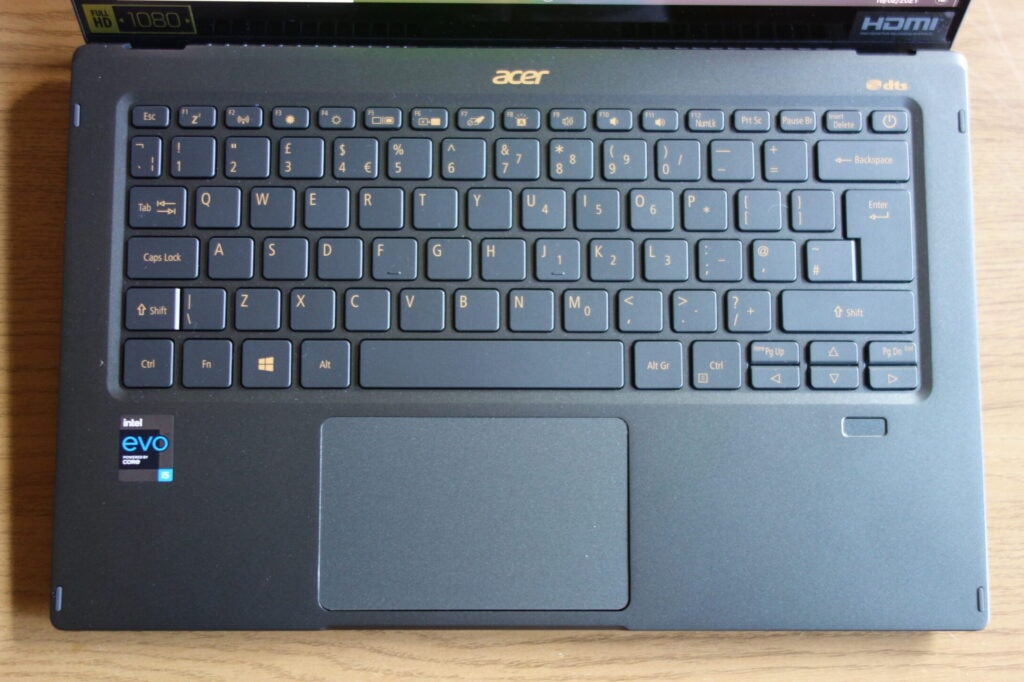 Not so welcome is the overbearing backlight, which results in a tacky glow; thankfully, it can be turned off. Strangely, the Swift 5 doesn’t feature a light indicator for the Caps Lock. This is a frustrating omission and makes entering passwords an even greater faff. A fingerprint sensor is embedded into the laptop just below the keyboard on the right and works as efficiently as one could hope for.

The trackpad is decent, too, with enough space for my fingers to glide across the surface and clicky feedback when pushing down. However, it’s frustratingly fussy for right-click inputs – I had to press exactly in the bottom-right corner for it to register.

Screen – Bright and colourful, but a little glossy

The Acer Swift 5 is limited to a Full HD 14-inch touchscreen display, but this isn’t really an issue for an ultrabook at this price.

I used a colorimeter to test the display, and found the Swift 5 to boast a peak brightness of 415 nits, which is well above the average 300 nits. A contrast ratio of 1469:1 isn’t the best I’ve seen from an ultrabook, but it’s still a great result that should help Netflix videos shine. 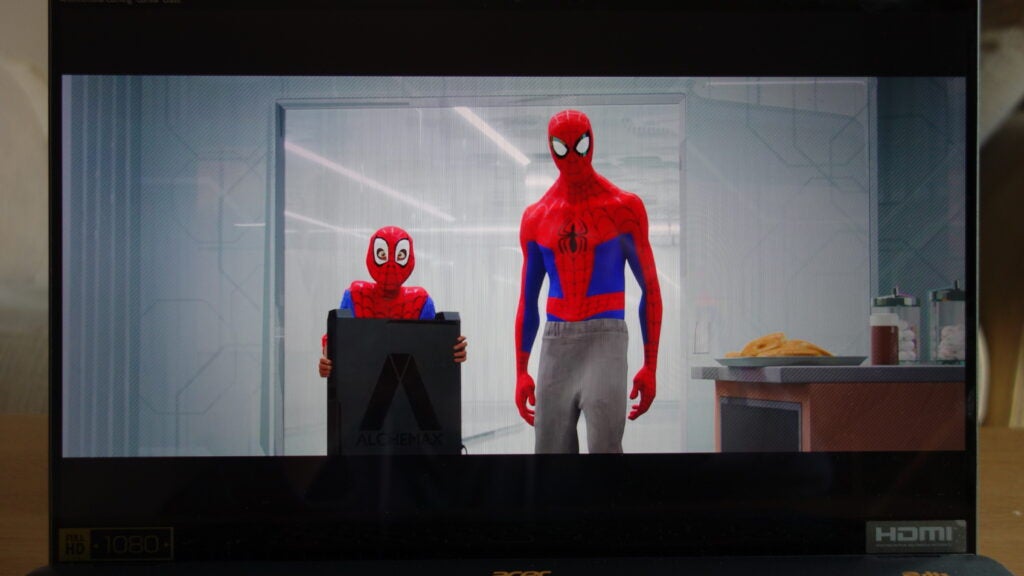 Colour accuracy is decent, too, with 96.4% coverage for sRGB. Its Adobe RGB and DCI-P3 results are poor ,though, which means the Swift 5’s screen isn’t accurate enough for professionals working with photos and videos.

My only real gripe with the screen is that it’s noticeably glossy. While it doesn’t present too much of an issue indoors, reflections become more irksome when used outdoors on a sunny day.

However, this remains a fantastic display for day-to-day office work and watching the likes of Netflix and Disney Plus. Avengers: Endgame showcased bold colours and dazzling visuals on the 14-inch screen, making the Swift 5 an excellent option for streaming films and TV shows.

The Acer Swift 5 comes packing Intel’s 11th-generation processors this time round, ranging up to an Intel Core i7-1165G7 chip and 16GB of RAM.

Acer sent in the entry-model configuration, which included an Intel Core i5-1135G7 processor, 8GB of RAM and a 512GB SSD. Despite housing mid-range specs, the laptop held up very well in our benchmark tests.

The i5 configuration of the Swift 5 wasn’t too far behind the performance levels of the Dell XPS 13 with an i7 chip. Both the Geekbench 5 and PCMark 10 results were very close to the Dell, while real-time performance was comfortably speedy to whizz through websites, social media and video streaming services without issue.

However, I have to point out that the MacBook Air saw significantly superior processing speed, with the M1 chip offering far more power than modern Intel processors. If you want high-end productivity performance for more serious tasks, then the MacBook Air remains the ultrabook of choice.

The Acer Swift 5’s Intel chip also features powerful integrated graphics, allowing it to engage with entry-level gaming and content creation. It isn’t going to offer high frame rates or be able to play the latest AAA games, but keep it to the likes of Fortnite and Minecraft and it should perform competently. Paying extra for the Nvidia MX350 discrete GPU will provide a small boost to the graphics performance, although we’re unable to say to what extent without testing it.

The Swift 5 can be configured with up to 1TB of storage, although the more affordable 512GB options should be sufficient for most users. By using CrystalMarkDisk, the laptop recorded read and write speeds of 2299MB/s and 1027MB/s respectively.

Such results mean you should get competent performance when saving/loading data on the physical drive, which can include opening an app or transferring video files to your hard drive.

The Acer Swift 5 doesn’t just excel as an on-the-go ultrabook because of its lightweight design, but also because it offers fantastic battery life.

After I dialled the brightness down to 150 nits and ran a PCMark 10 battery benchmark, the Swift 5 managed to keep chugging on for 15hrs 21mins – that’s a very impressive result, considering previous laptops have struggled to hit the 10-hour mark.

Of course, this figure will vary depending on the workloads. Here, the figure was obtained by performing an office simulation that involves spreadsheet filling, video chats and sending emails. So, if you’re looking for a laptop that can outlast the working day, the Swift 5 is an outstanding option. 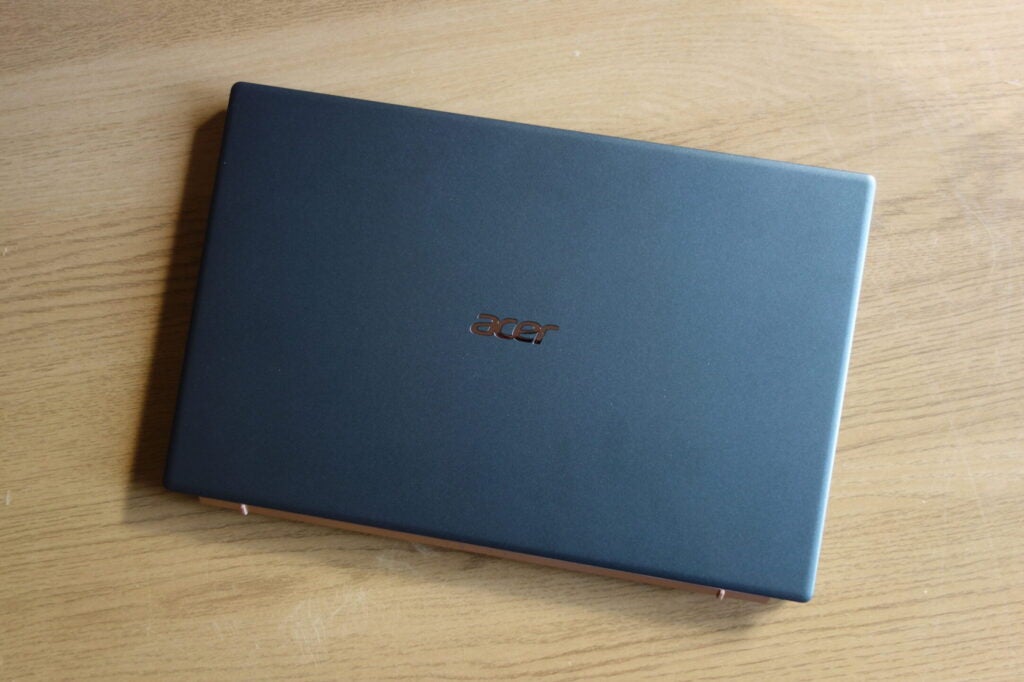 You should buy the Acer Swift 5 if…

You shouldn’t buy the Acer Swift 5 if…