Updated: Since my original review of the XPS 13, Dell has announced the next-generation XPS 13. This one’s a big step up, with Intel’s new 8th-generation Core i7 and i5 processors producing up to 44% better performance. The design has also changed, becoming thinner and lighter, and being offered in a new Rose Gold finish. There’s also the option of a 4K screen instead of the standard Full HD display.

Below continues my review of the previous gen Dell XPS 13

Dell’s XPS 13 is back for 2016 with an updated specification that includes more efficient Intel Kaby Lake processors and longer battery life. While the 2015 edition won our coveted Laptop of the Year award last time out, the 2016 model faces stiff competition from rival Windows 10 machines such as the HP Spectre, Lenovo IdeaPad 710S, Razer Blade Stealth and the veritable bargain that is the Asus ZenBook UX310UA. Then there’s also the brand-new MacBook Pro to contend with.

Despite the rise in competition, Dell does more than enough with the XPS 13 to make it the most desirable Windows Ultrabook around.

The new XPS 13 design has been around for a couple of years, but nobody has successfully replicated its trademark ‘InfinityEdge’ bezel that gives this machine its unique profile. It still looks great, as does the carbon-fibre finish on the palm rest. The palm rest does start to look a little greasy after use, but it’s not as significant as it is on darker, metal-finished laptops.

The lid, previously only available in silver, can now also be bought in rose gold. The same colour is also found along the bottom half of the laptop’s edges, which makes for a slightly odd-looking pink-bronze sandwich with a matte black filling. I’m not convinced that it looks better than the silver model, but many of my colleagues were smitten with the new design, so it’s clearly a matter of taste.

Like any pure metal laptop lid, I was obsessively worried about scratching it, and while I didn’t damage it during my testing, a ding or two feels inevitable in the average life of an ultra-portable laptop. 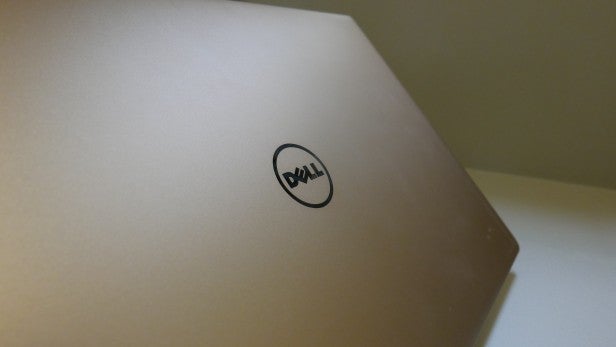 The model I was sent for review is the touchscreen version, which weighs in at 1.29kg. If you pick one of the matte, non-touch models that’ll drop to 1.2kg. It’s neither lightest nor the heaviest in its size category, but it certainly won’t be a strain on your shoulder when it’s stuffed into a satchel.

You get a full complement of useful ports on the XPS 13, including two full-size USB 3.0 connectors and a single Thunderbolt 3/USB 3.1-C combination port. The latter can be used for high-power, high-bandwidth devices with a maximum throughput of 40GB/s. It’s perfect for high-end monitors and storage arrays – something videographers will appreciate.

Elsewhere, there’s an SD card slot, a 3.5mm headset jack and a small button the left side to check the battery’s charge level when the machine is switched off. It’s a fine selection of ports that’s more generous than all of its rivals, although higher-end users might actually miss the three extra Thunderbolt 3 ports offered by the high-end MacBook Pro with Touch Bar.

The keyboard is standard Dell fare, with small, backlit, chiclet keys. It doesn’t feel overly cramped, even when you consider the Dell’s reduced footprint, although the overall design and feel of the keyboard have been made to look pretty dated by the latest MacBook Pro. It’s unfortunate, because nothing’s changed and it’s actually a very good ‘board. 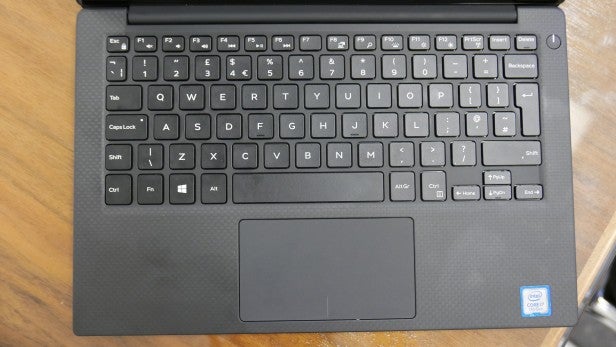 The keys on the top row double up as dedicated function keys for all the usual controls, including media playback, volume, keyboard backlight and screen brightness.

The touchpad is among the best found on Windows laptops. While it isn’t as responsive as any MacBook Pro, it comes a very close second. The surface is smooth and comfortable, gestures are reliable, and physical clicks are satisfying. Palm rejection is dependable, too – even when typing with my palms resting on the corners of the pad, I never activated any rogue clicks or swipes.

As you can see from the picture above, there’s a fairly significant gap between the touchpad and the palm rest, and you might also spot that a tiny piece of tissue paper has found its way into it. The same goes for the keys, which aren’t properly flush with the chassis. It may sound finnicky and fussy, but at this price point every flaw counts.

You get two choices of screen on the Dell XPS 13. My model came with the glossy, touch-enabled 3,200 x 1,800 panel, but there’s also a matte Full HD option available.

Performance is excellent. I measured its maximum brightness at 303 nits, while 0.3-nit black levels equate to a good 1,010:1 contrast ratio, which produces stark contrast between vibrant colours and more subtle shades.

The screen covers 92.6% of the sRGB colour gamut, which is great for photographers working in that colour space. However, Adobe RGB and DCI P3 coverage are somewhat wanting, at 71.7% and 67.8% respectively. It’s here where the MacBook Pro holds an advantage – its massive 98.8% DCI P3 coverage means video professionals won’t need an external monitor to get an accurate look at what they’re working on, where Dell users will. 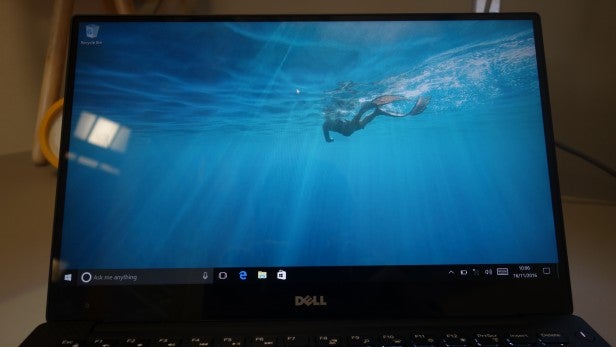 For everybody else less concerned with hyper-accurate colours, the Dell XPS 13 does a great job of displaying vibrant tones and is more than good enough for image editing and watching a few videos.

I like the addition of a touch-sensitive panel – sometimes it’s just more comfortable to scroll up and down using the screen instead of a touchpad. The protective glass over the touch layer does make for a fairly reflective surface, but no more so than any other glossy-screened laptop.

From an audio standpoint, the Dell XPS 13 is much less attractive than the MacBook Pro. The speakers, which fire from the left and right edges of the machine, aren’t great and lack depth. The pre-installed audio-mixing software can make a difference by artificially boosting lower-end sounds, but all the software enhancements in the world can’t save a mediocre set of speakers. They are at least loud and will be fine for watching YouTube videos, but not so great for movies or music. 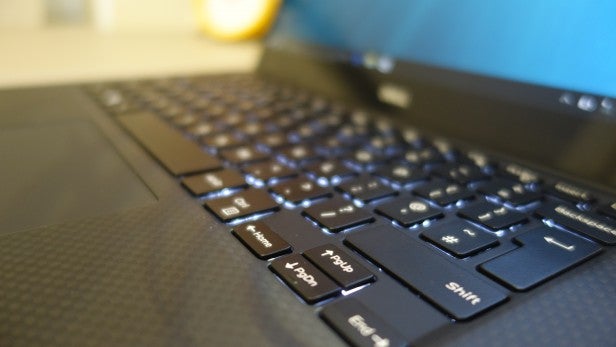 The webcam is of a decent quality, although in order to make the ultra-thin bezel possible it’s been moved to the bottom left of the screen. It’s not a dealbreaker, but it does mean you have to push the screen back a little further than you might want in order to give your chat partners a better view of your face.

The microphone is fine – it picked up my voice from a normal sitting position pretty well, although I did catch a little static hissing in what was, in reality, a silent room.