Kaby Lake is Intel’s latest CPU architecture. This article contains everything you need to know, including the specifications  of every processor launched so far for laptops and desktops, plus the latest news on an impending specs refresh.

Intel has sneakily launched four new desktop processors and two new laptop processors into the market. They’re small updates, but you’ll likely see them in pre-built PCs and laptops near you in the coming months.

First up, the new desktop chips. These all take the form if fairly low-end Core i3 chips for cheap or compact desktops. The chips with a T at the end are for small form-factor PCs and all-in-ones, while those without a letter suffix are regular processors you’ll be able to stick into your Kaby Lake motherboard if you so wish.

On the laptop side, we have some very minor updates to the U-Suffix dual-core processors. These chips are found in both cheap and compact laptops, but can also be found in the likes of the MacBook Pro and Surface Laptop, among others. Both the new Core i5 and i7 chips have 0.2GHz increases in maximum Turbo Boost speed, while one Core i3 has been downclocked and the other gets a 0.2GHz increase.

What is Kaby Lake?

Kaby Lake is a minor upgrade because Intel has ditched its “Tick-Tock” approach to processor design, meaning there are no major structural changes to the chip or what it’s capable of.

Video: We explain Kaby Lake as fast as possible

Previously, each generation of Intel processors would see a reduction in process size (smaller, lower power consumption) and then an improvement in architecture (more powerful). This was called Tick-Tock.

Related: The best gaming PC you can build yourself

Instead of Tick-Tock, Intel has now stretched out the lifespan of a given process size – in this case, 14nm (nanometers) – to three phases. Its new approach first sees a reduction in process size, then an upgrade to architecture, with a final “optimisation” phase added to make the most of what’s been done so far.

Process, Architecture, Optimisation. Drum that into your head.

This is bad for fans of big-number upgrades, but obviously great for Intel, which is able to make the most of what has become an increasingly complex process of designing chips.

It also means it’s able to offer up fairly small, semi-annual upgrades with brand-new model names, which laptop and desktop manufacturers can use to show off and shift more units.

In the case of this generation of 14nm hardware, 5th-gen “Broadwell” was the process redesign; Skylake was the architecture redesign (meaning an entirely new socket); with Kaby Lake the last hurrah for 14nm before Intel moves onto “Cannonlake”, which will be a 10nm design.

For more information on some of the more technical aspects of Kaby Lake, see our other articles:

For its 7th-generation Core, Intel is describing its 14nm process as 14nm+. With the move to Broadwell, Intel started to manufacture taller and thinner transistor fins. This essentially allows for increased drive current and performance.

A continuation of this technology is enabling Intel to drive greater performance for Kaby Lake with the same power consumption as 6th-generation Core. Better efficiency in the chip also means that the processors can Turbo Boost to higher speeds for longer.

Perhaps the biggest change to the processor is the addition of a new media engine, which can decode Ultra HD video on-chip. While previous Core chips may have been powerful enough to do so in software, the effect on battery life was noticeable.

By shifting decoding into hardware, Intel can improve battery life and reduce heat, and is quoting three times the battery life when decoding 4K video. That figure will depend on the particular laptop, but it’s certainly an impressive feature. Intel’s media engine will decode VP9 and HEVC 10-bit codecs, which covers the most popular Ultra HD formats – especially for streaming.

Aside from increased efficiency and higher clock speeds, Intel’s so-called Speed Shift technology will see processors able to change clock speed faster than previous generations. This means in short-burst tasks such as opening apps, Kaby Lake chips will be snappier.

In short, there will be more PCI-E lanes than before, which means you’ll be able to connect more high-end peripherals without running into speed bottlenecks. There are 24 in the new Z270 chipset versus the old Z170 chipset. 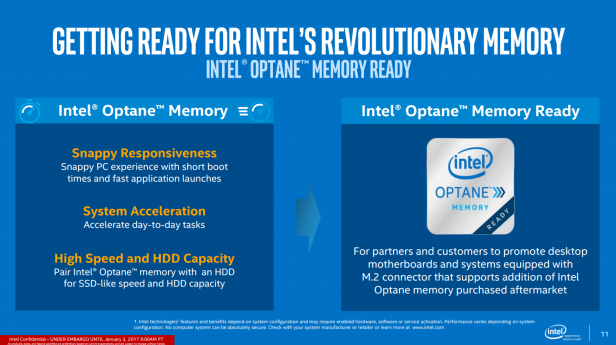 You also now get support for Intel Optane, a new technology Intel previously talked about in relation to ultra-high-performance storage for servers.

Here, Intel has incorporated Optane support into motherboards, which will allow users to install a low-cost, low-capacity Optane module onto their system. These modules will likely be low-capacity storage devices that are faster than an SSD but slower than system memory (RAM), providing a performance boost in a similar way to how hybrid hard disks work today.

There’s also been a big improvement in terms of graphics, which could prove to be a big deal for gamers on a tight budget. While Intel HD graphics doesn’t appear to have been hugely improved, new Intel Iris Plus 640 and 650 graphics should see gaming performance improve significantly.

Specifically, Intel claims that processors equipped with Intel Iris Plus 650 will show 65% better graphics performance than regular HD Graphics 630. That’s a big deal – and actually makes some lighter 3D games, such as Overwatch, playable in Full HD. We’ll have to test this ourselves to see if there are any caveats. 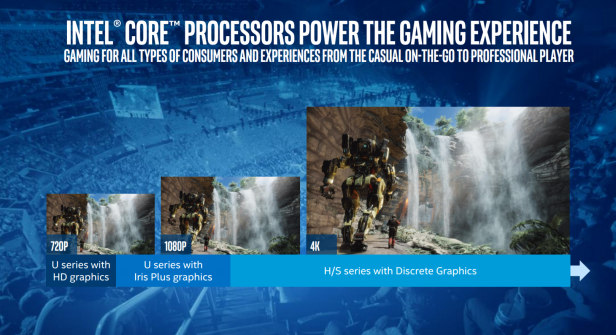 The first set of Kaby Lake laptop chips actually launched in late 2016, with various low-power chips making their debuts on laptops such as the Dell XPS 13, Razer Blade Stealth and Acer Spin 7. 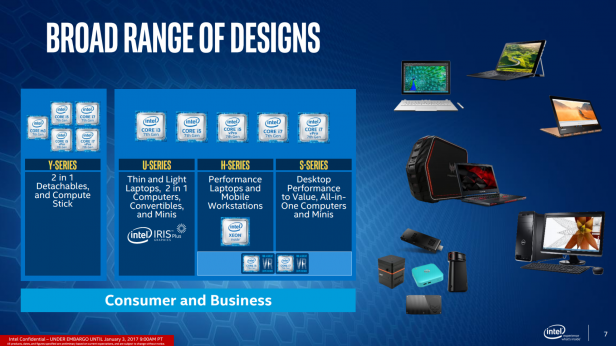 Intel also snuck out an interesting new desktop processor in the form of the Intel Core i3-7350K. This is a follow-up to the firm’s Pentium Anniversary Edition G3258, and brings overclocking to a Core i3 chip for the first time. It gets a clock speed of 4.2GHz and has a dual-core architecture with Hyper-Threading, meaning a lack of cores shouldn’t prove a huge bottleneck in most games.

This chip should be much more competitive than the Pentium when it launched, although the price will be higher as well.

As of today, this is the full range of Intel Kaby Lake chips for consumers. We’ve not included Intel Xeon chips for servers.

U-series chips are the most common Intel processors around. You’ll find them in everything from a budget 15.6-inch machine all the way up to the high-end MacBook Pro 13-inch (if Apple decides to update its 2016 MacBooks with Kaby Lake).

Pay special attention to the last two numbers. Those ending in “00U” get basic Intel HD Graphics, while those ending in “60U” get Intel Iris Plus 640 – better for gaming, 3D and video-effects work. You’ll find these on base model MacBook Pros.

Those ending in “67U” and “87U” get Intel Iris Plus 650 and also have a higher TDP, which lets them run faster for longer. You’ll find them on high-end laptops, including the 13-inch MacBook Pro.

For more, read our Core i3, i5 and i7 comparison article.

You’ll find these on high-end multimedia laptops such as the Dell XPS 15 and MacBook Pro 15-inch (if the two firms announce Kaby Lake refreshes).

These are processors for PC building enthusiasts and are the fastest consumer processors you can buy.

These are more standard parts found in pre-built gaming PCs, and are often cheaper than their 91W siblings. They’re still powerful, but don’t come with the overclocking ability of the 91W range.

These are usually found in all-in-one PCs and compact systems, and are downclocked versions of the higher-wattage range.