HP has repositioned itself as a premium lifestyle brand. While you might say this first came about several years ago when the company partnered with Beats (now owned by Apple) and launched a range of silver Envy laptops, the HP has doubled down with the Spectre 13.

Related: Our pick of the best laptops

The Spectre 13 is an ultra-thin, ultra-light laptop looking to rival Apple’s 12-inch MacBook and 13in MacBook Air. It succeeds on some fronts, but there are some big compromises.

Weighing only 1.1kg, with a maximum thickness of just over 10mm, HP has succeeded in its aim of producing the thinnest Intel Core i-powered laptop around. I took the Spectre 13 on two flights and a train journey and it was the perfect companion.

It comes with a leather sleeve, too, meaning I didn’t have to worry about the dark grey aluminium lid picking up any scratches in my backpack.

The actual design and colour choice of the Spectre 13 will divide opinion. I don’t dislike the grey aluminium finish with copper-coloured highlights, but in my opinion HP hasn’t done itself any favours by not offering a less showy option of the laptop. Obviously, HP wants its laptop to stand out on store shelves, which it achieves, but I don’t think this translates well to the real world. Nevertheless, you can’t deny that HP has done a great job of creating something unique.

Related: Extend your Wi-Fi range with our best extenders

The Spectre 13 feels reasonably well built: the keyboard tray feels solid and the corners of the laptop look capable of taking a few knocks without damaging the components inside.

The “piston” hinge is another unique design choice that sets the Spectre apart, but ultimately, it’s one of its flaws. Its use limits the movement of the lid, so it doesn’t tilt back quite far enough when you’re working with the Spectre 13 on your lap in a cramped space. However, the screen’s viewing angles are wide enough to minimise the effects here. 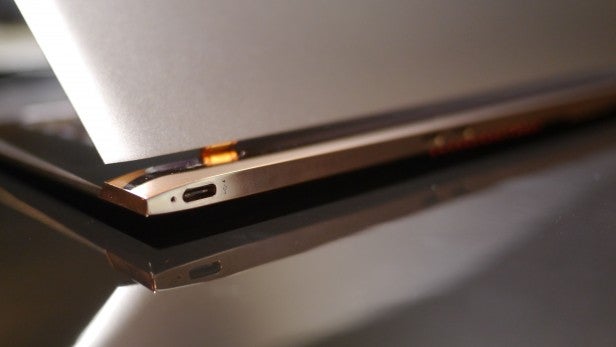 The keyboard is backlit, which is useful for typing in the dark, but otherwise there isn’t much here that warrants praise. It’s comfortable to type on, but the key-press action isn’t the most tactile I’ve felt and travel, too, could be better.

The Spectre 13’s touchpad is a real disappointment. It isn’t a Microsoft-certified Precision Touchpad, so effectively doesn’t benefit from excellent, responsive drivers and seamless gestures.

It does the basics reasonably well, but having used Precision Touchpads HP’s feels half a decade behind. The worst part is the physical click, which, when activated, causes the cursor to jump slightly. 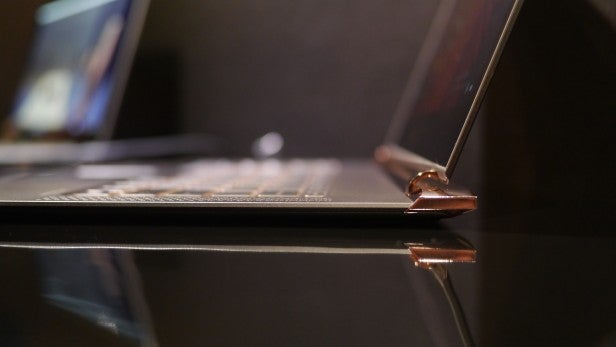 There are three USB Type-C ports at the rear of the device, one for charging and the other two for high-speed data transfer via the USB 3.1 Gen 2 ports. Note that the charging port can also be used as a data transfer port.

One USB Type-C to USB Type-A port is supplied in the box, so you’ll be able to connect your legacy peripherals. However, if you want to connect to a network via Ethernet, you’ll have to buy an Ethernet to USB Type-C connector for between £15-£30.

You do get excellent dual-band, 802.11ac Wi-Fi, which I found to be reliable throughout my testing.

The Full HD IPS screen on the Spectre 13 is superb, but you’d expect nothing less for the money. Contrast and brightness are excellent – the Spectre 13 reaches a maximum brightness of 301cd/m2 – but the screen’s Gorilla Glass (non-touch) coating does mean reflections are a slight problem.

The screen covers 95% of the sRGB colour gamut, and as a result most vibrant colours are served well. Contrast is rated at 1,531:1, meaning bright colours stand out while darker areas look inky. Backlight bleed, where visible, is minor. Overall, this is an excellent display.

In contrast, the Spectre 13’s built-in speakers are disappointing, failing to offer much depth or range. They’re fine for TV and the occasional movie, but you’ll get a better experience from the rear-mounted 3.5mm jack with either headphones or desktop speakers.

Next
Performance and Battery Life Review