The HP Spectre x360 13 is a fantastic ultrabook. It has a speedy performance, an ultra-portable design and the option of an absolutely gorgeous 4K display that provides extra pizzazz to Netflix content. The poor battery life prevents this laptop getting full marks though, but that's the compromise you have to make for best-in-class picture quality.

The HP Spectre x360 13 is the latest entry in HP’s ongoing line of premium laptops.

The HP Spectre x360 has long remained “the other one” when discussing ultrabooks. The likes of the Microsoft Surface Laptop, Apple MacBook and Dell XPS ranges have long dominated the spotlight instead.

The Spectre x360 has been held back by glaring shortcomings that have made it hard to recommend. With the new model, HP has refined its established formula, but also, finally addressed big drawbacks. Can the HP Spectre x360 13 be a true contender in 2020?

The HP Spectre x360 is definitely eye-catching and not in a way that’s garish or overly showy. This laptop oozes class, stemming from its aluminium body and sharp edges.

The Spectre x360 comes in black, dark blue and silver colour variants. I was impressed by our silver review model, offering a domineering look while remaining professional. The black model also looks slick and may be the choice for those prioritising flair. 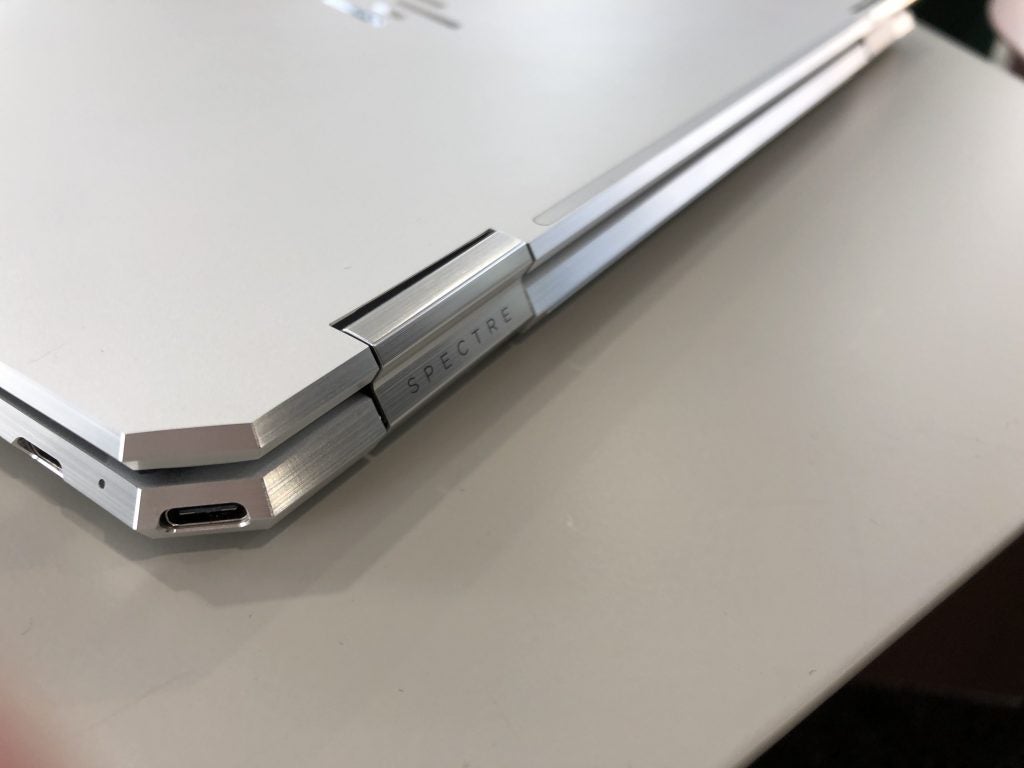 The sharp edges of the HP Spectre x360 13 are one of the first things you’ll notice. HP has still managed to incorporate ports alongside it’s unique designed edges.

There’s a full-size USB-A port (remarkably), a USB-C port, a MicroSD slot and a headphones jack. HP even uses an additional USB-C port on the corner of the device for charging.

The HP Spectre x360 13 makes room on the side for some extra privacy too. There’s a webcam kill switch that completely cuts power to give you peace of mind when not in use.

As the name suggests, the laptop is a 2-in-1 with a 360-hinge. The hinge feels super sturdy and its small size means you’ll find it a dream to whip out and watch Netflix on a long train journey or just around the house. 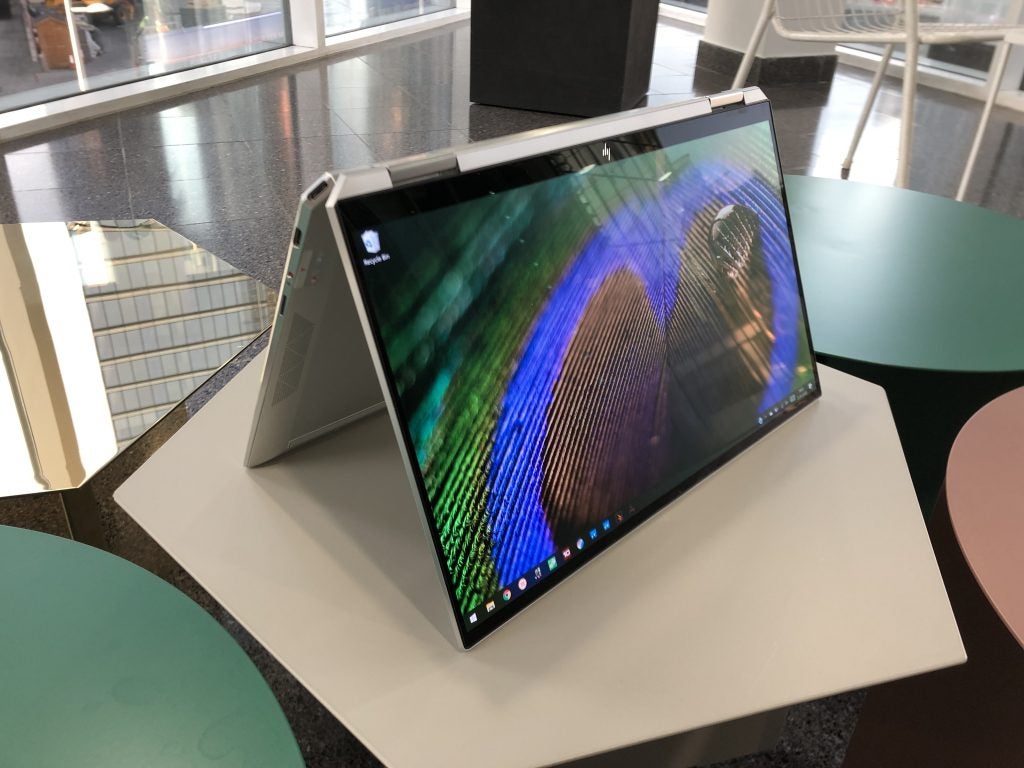 My only criticism for this laptop’s design is that – beyond the sharp edges – it’s a familiar one. The 2020 HP Spectre x360 13 design feels like a laptop form-factor that’s been around for many years. It may be time for HP to take a few more risks in order to stand out.

It’s in this area where HP deserves a “most improved” ribbon – and a big one at that. HP Spectre x360 models have been held back in recent years by a lacklustre trackpad and keyboards with middling performance. In 2020, HP has turned this on its head. 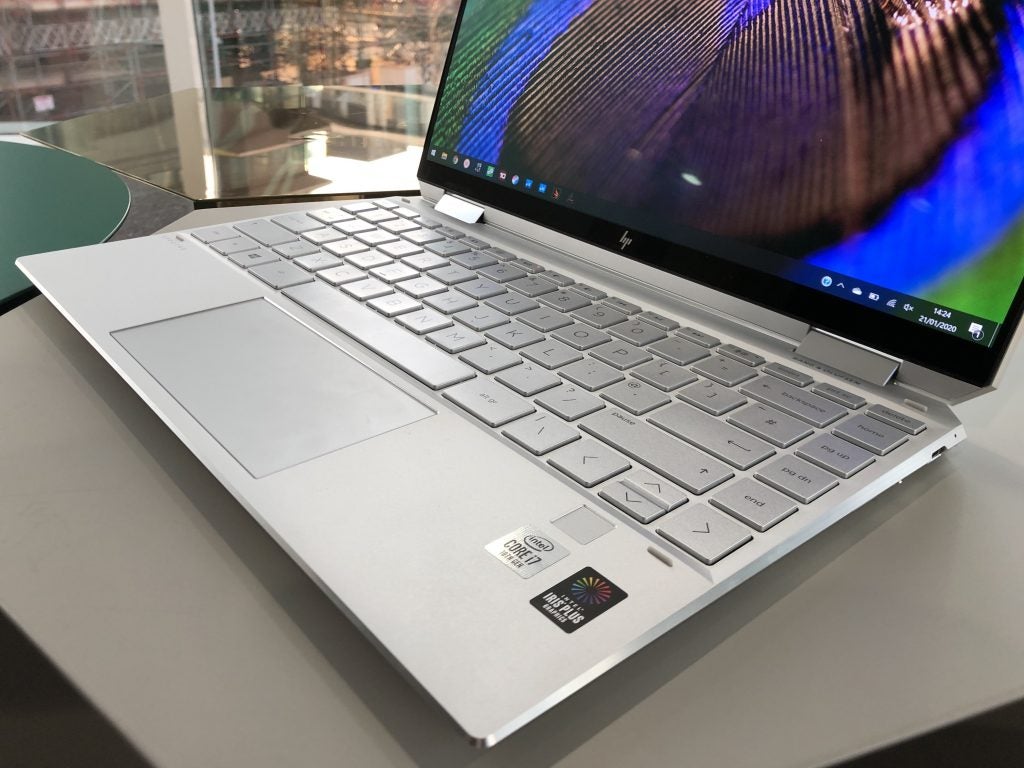 The keys don’t offer a lot of depth, but they are clicky and provide a satisfying typing experience – especially for such a petit device.

For the trackpad, HP previously used its own drivers, but has now moved onto Windows Precision ones and it’s done a world of good. The trackpad works perfectly – my only qualm would be the size, but not much can be done due to the laptop’s compact frame.

Our review model included a 4K AMOLED display that is almost unmatched in its class.

The benefits of 4K on a 13-inch device are definitely up for debate. However, when it comes to viewing 4K image video content, this display looks exceptional and worthy of the extra cost compared to the Full HD option. A 4K display does have its downsides though, which I’ll touch on later when I get to battery life. 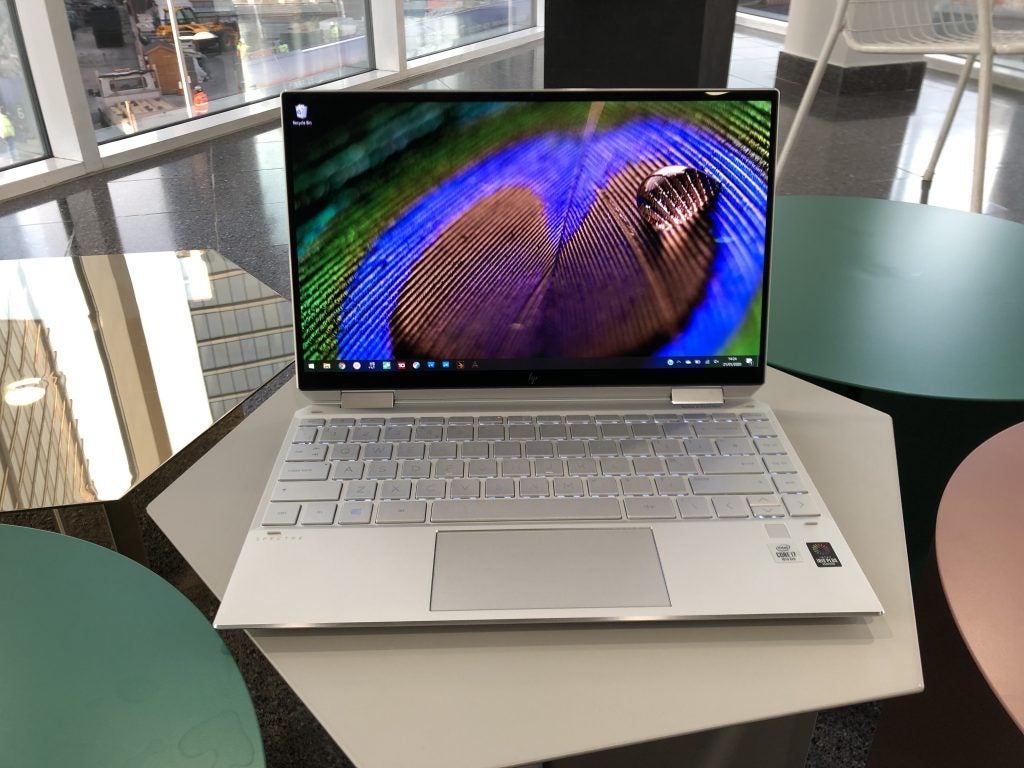 The display gets super bright too, topping out at 467 nits, making it one of the brightest screens we’ve tested on a laptop. It comfortably outshines the maximum 388 nits brightness of the Surface Laptop 3 13-inch.

Being an AMOLED display, you get a fantastic contrast too. Black colours are as dark as you could wish for, which helps colours pop out of the background better.

The HP Spectre x360 excels particularly at colour coverage, boasting one of the most accurate displays seen on a laptop yet. With a 100% sRGB coverage, digital art and animation looks just as good as the creator intended. Even more impressive, the 96.8% Adobe RGB and 99.4% DCI-P3 colour coverage ensure photo-realistic images look incredibly accurate.

The only qualm I have with the display is one of personal preference: its 16:9 aspect ratio. One of the best things the Surface Laptops has given us is a mainstream introduction 3:2 displays. A 3:2 aspect ratio offers a taller display and this allows for more information to be shown on screen – it’s a real game changer.

Our review model costs £1799 and features 16GB of RAM, 1TB of storage, the 4K display and the i7, so I expected big things and the Spectre x360 13 largely didn’t disappoint.

The results of the HP Spectre x360 13 falls in line with its competitors, even leading the way in numerous tests. The strong performance plays out in the real world too. Our top-spec review model easily chewed up and spat out productivity tasks, running upwards of 10 tabs in Chrome with little sign of slowing down.

The laptop did post some disappointing read and write speeds though. With a 2,126 MB/s read score, the Spectre x360 13 should be able to load files at the same speed as most rival ultrabooks. The sluggish 661 MB/s result, however, means saving files onto the system could take longer than you’d like. 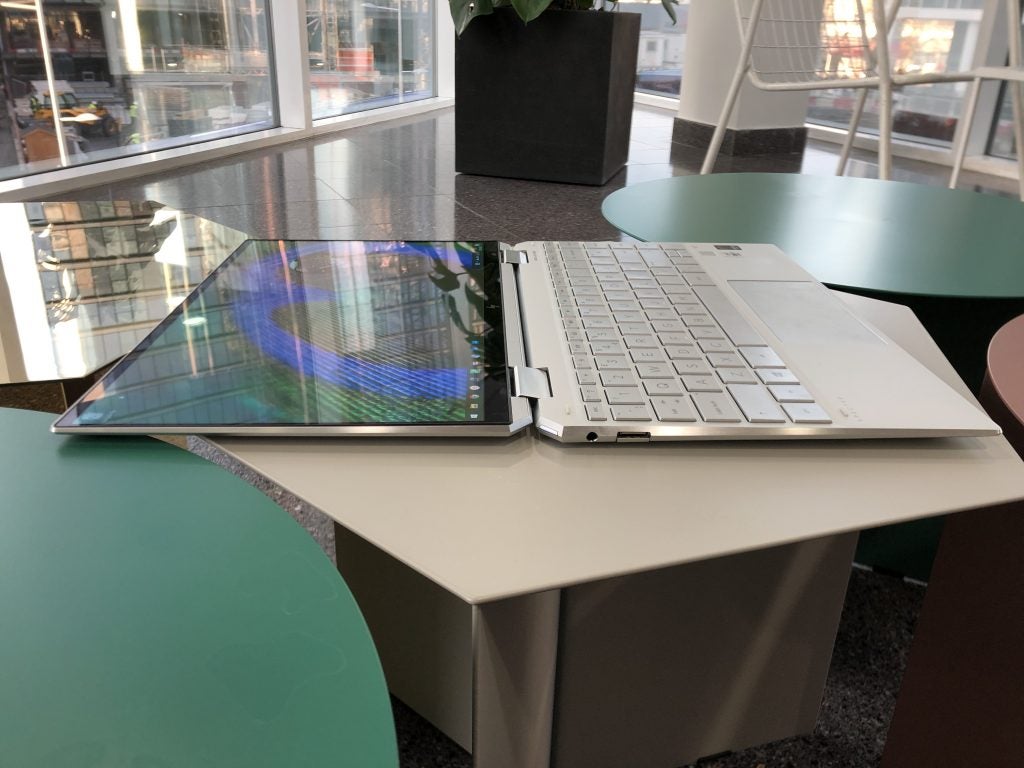 The latest 13-inch flagship from HP is almost a perfect machine, but unfortunately HP had to make a big compromise to fit in that 4K panel: the battery life.

Our 4K review model of the HP Spectre x360 13 managed just under 4 hours and 30 minutes in our battery benchmark. The same results played out in the real-world testing. The result isn’t a complete disaster, giving you plenty of time for a coffee shop productivity session, but it isn’t going to last you a full workday.

If you opt for the Full HD model this issue likely won’t hit you as hard. HP says the Full HD model offers more than double the battery life – without testing we can’t confirm this, but it will undoubtedly last longer.

If you’re after an ultrabook with a 4K display then this is a problem you have to contend with. 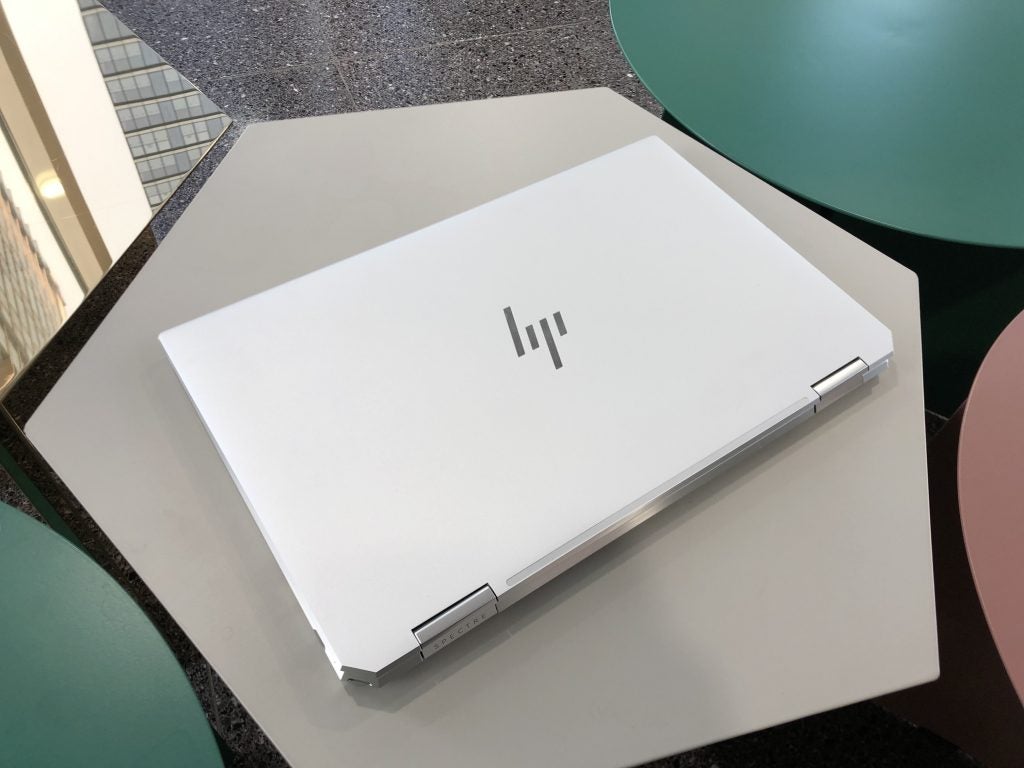 The HP Spectre x360 13 is one of the best ultrabooks on the market. You’ll love it if you’re looking for a little powerhouse to lug around with minimal effort – and you’ll look good while doing it.

The biggest cause for concern here is that the size and (optional) 4K display significantly hamper battery life. If battery life is more important to you then display quality, you’ll find more well-rounded premium Windows experience with the Dell XPS 13 2-in-1 and Surface Laptop 3 13.

That said, if you’re regularly watching Netflix and want the best viewing experience possible, the HP Spectre x360 13 gets a big recommendation from us. Just one look at that gorgeous screen will convince you that it’s a worthy compromise.

The HP Spectre x360 13 is a fantastic ultrabook. It has a speedy performance, an ultra-portable design and the option of an absolutely gorgeous 4K display that provides extra pizzazz to Netflix content. The poor battery life prevents this laptop getting full marks though, but that’s the compromise you have to make for best-in-class picture quality.