The HP Spectre x360 is one of the best small convertible laptops available in 2021. It lacks features seen in alternatives, like 5G and a slot-in stylus, but it does offer excellent build quality, a keyboard you’ll love working on, long battery life and a relatively high contrast screen.

The HP Spectre x360 13 is part of HP’s top-end line of convertible laptops. It is exceptionally well-made, and has a particular kind of portability.

Some rivals are slimmer, and some are lighter, but the HP Spectre x360 13 has unusually slimmed-down design, making its silhouette from above much smaller than most. Its weight and thickness are travel-friendly, too.

The HP Spectre x360 13’s real highlight, though, is how enjoyable it is to work on. Its keyboard is deep and responsive, the screen is bright enough to handle life outdoors and its Intel Core i5 and i7 processors offer excellent performance per square inch.

This is not a cheap laptop, and the HP Envy or Lenovo Yoga Slim 7 lines may be better if you want to spend less. But it’s cheaper than the Dell XPS 13 2-in-1, with no obvious sacrifices involved.

HP has not radically altered the HP Spectre x360 13’s design this year. It still has the bold square keys and the unusual 45-degree cuts offs at the top of the keyboard plate and bottom of the screen bezel that make it stand out a mile from other laptops.

I’ll let your eyes judge whether HP’s Spectre x360 is a masterpiece of style or a step too far from the smoother curves ultrabook-style laptops tend to have, but the HP Spectre x360 13 is undeniably neat and petite. 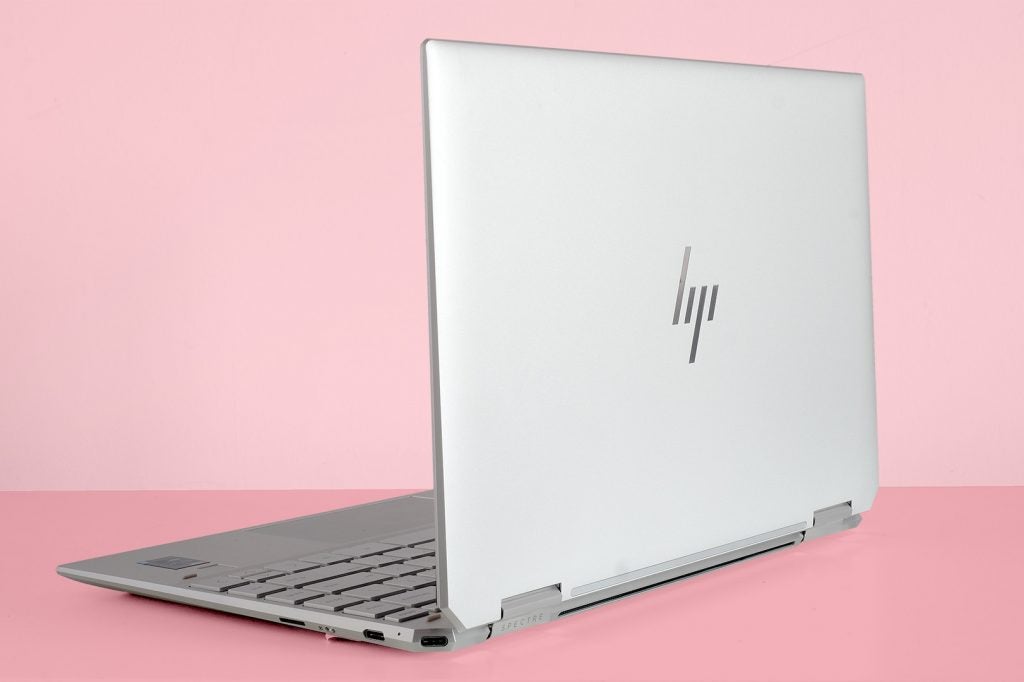 The HP Spectre x360 13 has a 16:9 aspect screen and there’s relatively little space between the hinge and the bottom of the display. When I work with it on my lap outdoors, its base doesn’t actually reach my knees proper because it’s a good inch or so smaller than the norm.

What’s the benefit? If you’re going to mainly work on a desk, not much. But it lets the HP Spectre x360 13 fit into smaller spaces, whether that’s a bag or a cramped train table.

This is also a convertible laptop, one with a 360-degree swivel display. It has among the best 2-in-1 hinges going, with almost no wobble when you work on a less than solid surface – like your legs. 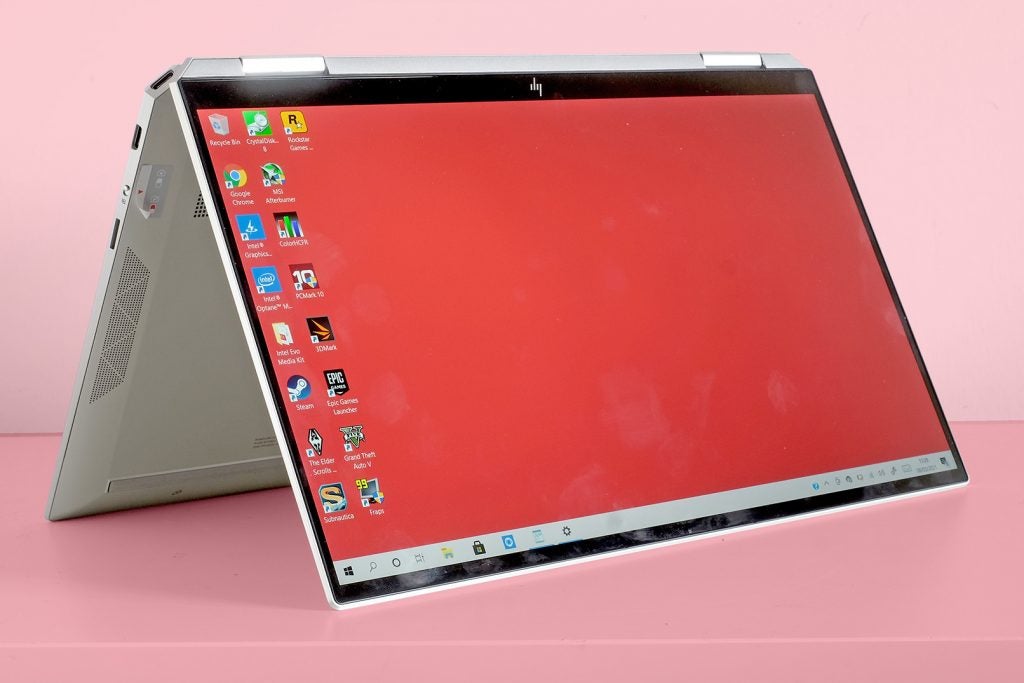 Build quality in general is superb. The body plates are aluminium rather than magnesium, offering an unmistakably metallic feel. And both the lid and keyboard plate are wonderfully rigid. It’s all part of why you have to pay the big bucks for the HP Spectre x360 13.

I love working on the HP Spectre x360 13, and that is mostly doing “boring” stuff that doesn’t necessarily seem the perfect fit for a movie-ready 16:9 screen. A taller 3:2 aspect is usually preferred for productivity apps.

However, I find this is outweighed by the keyboard. The HP Spectre x360 13 has a much deeper, more satisfying keyboard than, for example, the Dell XPS 13 2-in-1. It seems beamed right from the old days when it was the norm to have 1.4mm key action, or more. 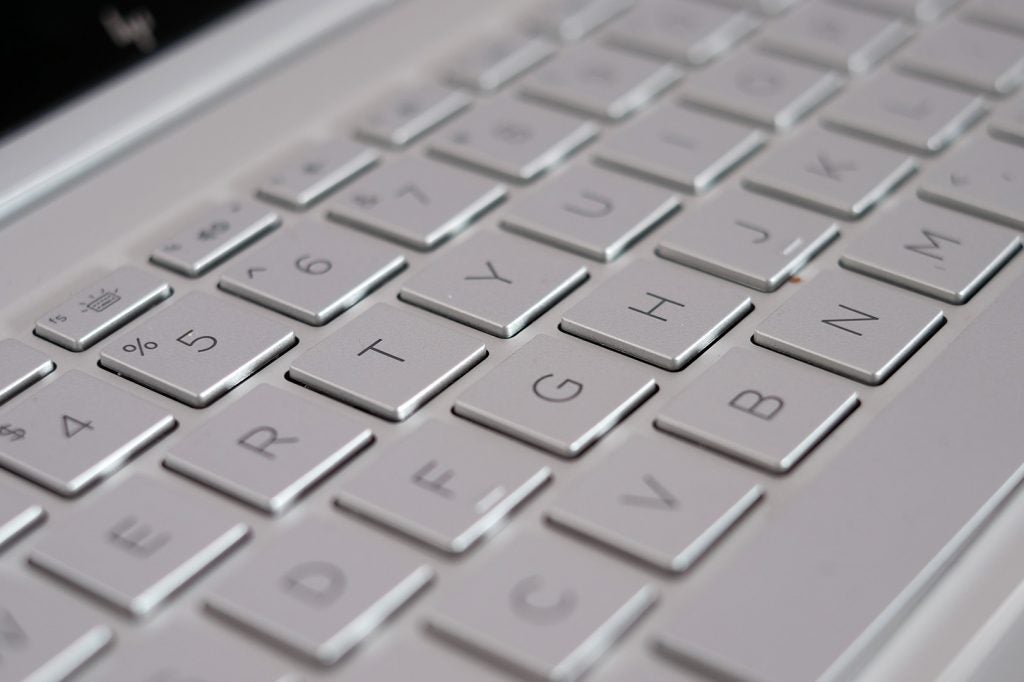 A row of function keys that sits to the right of the primary set sees the whole keyboard shunted just slightly to the left, but I can’t say I noticed any difference to the ergonomics here other than accidentally pressing “page down” instead of “enter” for the first few days. I sunk into this one almost immediately, which I can’t say about the Galaxy Book Flex2, which has a pretty shallow keyboard.

The keys have a backlight with two intensity levels, and a reasonable fingerprint scanner sits below.

HP had to use a fairly short touchpad in the HP Spectre x360 13, to match its low-depth base. The pad itself is of top quality, though, with a smooth textured glass surface and a clicker that balances ease of press with solid resistance well. 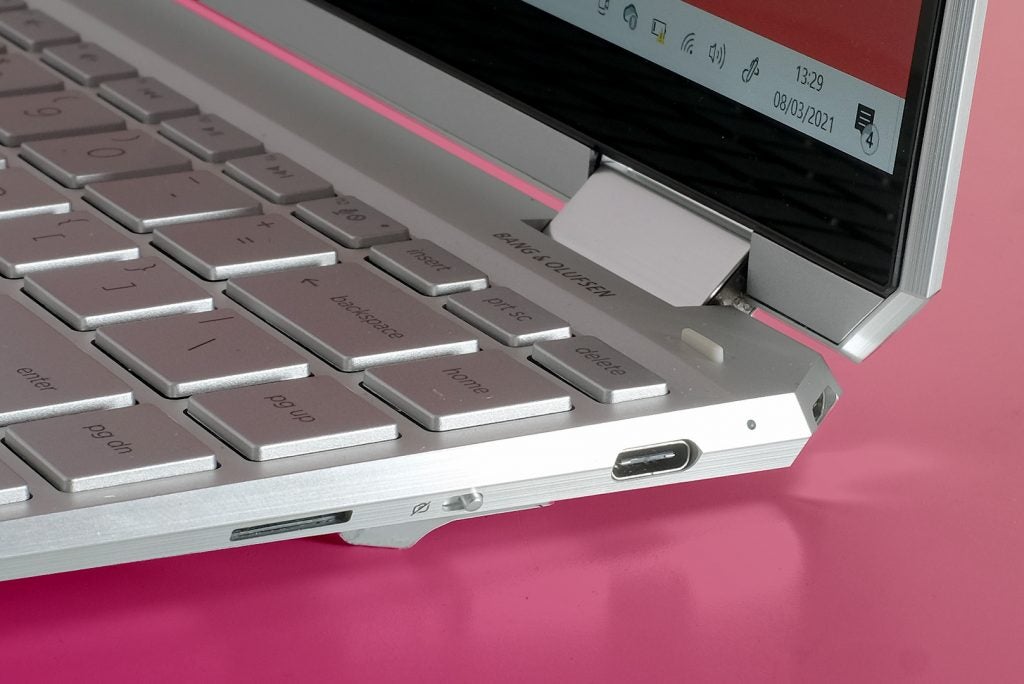 And if you don’t like the sound of a cut-down touchpad, just take a look at the 14-inch version of the HP Spectre x360 instead. It has a 3:2 aspect ratio screen, and a much taller touchpad. But, I presume, it’s otherwise fairly similar.

The HP Spectre x360 has speakers with a Bang & Olufsen stamp, but they are not particularly loud. Still, they do have a little bit of bass and a reasonable, somewhat bright tone that does the job for YouTube videos.

This laptop also features Thunderbolt 4 ports, a microSD slot, a headphone jack and a USB-A port. The latter is the classic rectangular style of USB, and I’m always glad to see one in a laptop like this as almost all of my peripherals end in a full-size USB, not USB-C.

Display – Bright, but without pro-grade colour

I’m using the 13-inch version of the HP Spectre x360 for review, which has a 1080p LCD screen. This sort of resolution doesn’t get rid of pixelation entirely. You can see a slightly cragginess to text in Microsoft Word. But just about all of this laptop’s rivals, like the Dell XPS 13 2-in-1, use a 1080p in their lower spec versions.

Even in this 1080p version, maximum brightness is a more than respectable 460 nits. You don’t even need to use the full brightness when working outdoors unless the sun shines directly at the screen as the display also has a pretty effective anti-reflective coating. This is important because the HP Spectre x360 13 has a glossy display that doesn’t scatter reflections like a matte one.

Very high contrast for an LCD also dramatically improves how good the HP Spectre x360 13 looks to the naked eye. It reaches 1593:1 according to my Spyder X colorimeter, and this is high enough to make blacks look rich and inky even with the brightness maxed. As long as you are not in a darkened room, anyway. 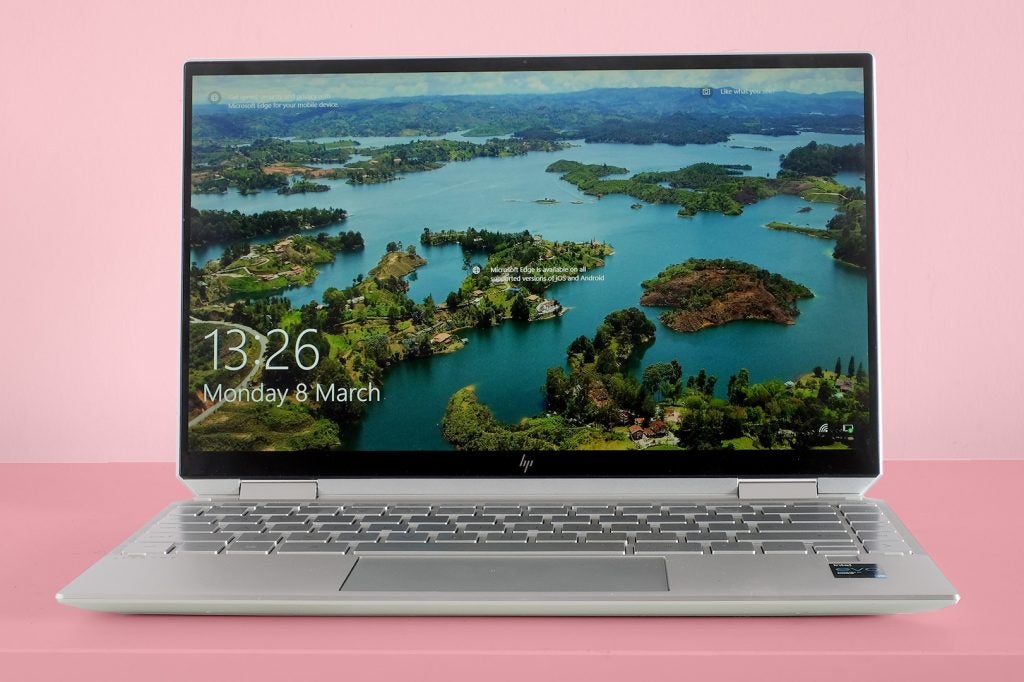 What does all this mean? The LCD screen can’t quite replicate the deepest of red, greens and blues, the tones that can make a vibrant image with larger-than-life colour look super-vivid. However, this is still very good colour coverage, and roughly matches the MacBook Air‘s colour depth.

The HP Spectre x360 also supports HP’s digitizer stylus pen. There’s no hole in the shell to actually put a pen and our review sample didn’t include one. But it’s a handy feature if you want to use design or drawing apps, and the convertible hinge can help here too, getting the keyboard out of the way.

Performance – Par for the 2021 course

Windows 10 runs perfectly, and this laptop easily has enough power to run Photoshop, office apps and music production software very well. If you spend a lot of time editing video or rendering 3D models, you might want to consider a chunkier, higher-powered laptop or a MacBook. Apple’s new CPU offers staggering performance with fully optimised apps considering the size and weight of the MacBook Air and Pro.

But for most of us, the HP Spectre x360 is easily powerful enough. I would actually recommend the step-down Core i5 CPU model to most friends who ask for laptop advice.

The Intel Core i7 CPU also comes with Intel’s new secret weapon: an Xe graphics chipset. This is so much better than the Intel UHD 620 seen an earlier laptops of this style, it’s a bit like a shift in game console generations.

Intel Xe lets you play games like GTA V, The Witcher 3, Kingdom Come: Deliverance and other PS4/Xbox One generation games surprisingly well. You don’t always have to use rock-bottom graphics settings, and plenty will play well at native 1080p. Calling the HP Spectre x360 a good gaming laptop would be an insult to the actual best gaming laptops. But it can probably play an awful lot more games than you’d guess. The HP Spectre x360 remained silent whenever I tasked it with basic work. A word processor app and browser window don’t cause the fans to start spinning. And even when playing GTA V the fans aren’t too distracting. They tend to generate a relatively low-pitch whir, which the integrated speakers manage to drown out without too much fuss.

The SSD is an Intel Optane model. It reaches read speed of 2260MB/s and writes of 1122MB/s, which aren’t particularly high scores, but still mean the Spectre x360 can load and save data on the physical drive at a reasonable speed. Some laptop SSDs now exceed 3000MB/s, so there are faster alternatives out there if this is important to you.

Battery – All-day working is no struggle

It results in, unsurprisingly, real-world stamina somewhere between the two. But we are still in very comfortably territory. 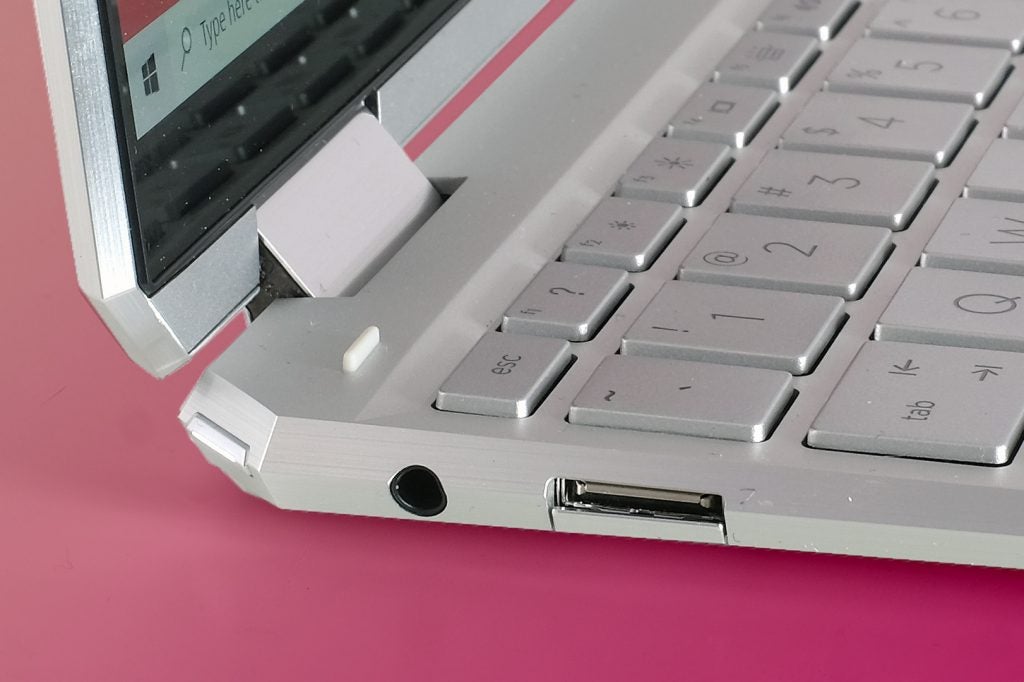 The HP Spectre x360 lasts 12 hours 15 minutes when streaming 1080p video at 150-nit brightness, which is the kind of display setting you might use indoors. Not bad, right?

There will likely be a significant hit to battery life if you buy the 4K OLED HP Spectre x360 instead, so bear that in mind before assuming the high-end model will be better in all respects. The screen is the main difference between the two, as neither has advanced extras like 5G.

The HP Spectre x360 13 (2021) is one of my absolute favourite ultra-portable convertible laptops right now. Its screen looks superb, battery life is fantastic and the build quality is among the best.

It is missing a number of features found with rivals such as the Galaxy Book Flex2 however, with no bundled stylus or 5G support. But considering you have to pay a few hundred quid more to buy Samsung’s 2-in-1 notebook, the HP Spectre x360 13 remains the better value purchase.

You should buy the HP Spectre x360 if…

You should not buy the if…