The Dell G5 is one of the best-value mid-range gaming laptops on the market, capable of playing any game you throw its way in Full HD. Just bear in mind you’ll have to put up with a bland design and a sub-par display to appreciate this bargain.

The Dell G5 15 is a mid-range gaming laptop that’s capable of playing some of the most intensive Full HD games with buttery-smooth frame rates. It might not be one of the most physically attractive gaming laptops available, but those happy to sacrifice some flair will save a decent amount of cash with the Dell G5.

Despite being the second-cheapest option, our review unit actually boasts the best graphics card of the bunch: a GTX 1060 with Max Q design. Why is it so cheap? Well, because it only offers the i5 version of the 8th Gen Intel Core CPU. However, since a graphics card is significantly more important for frame rates than a processor, this remains the best-value option by a long way.

But unlike the less powerful Dell G3 gaming laptop, the Dell G5 isn’t unrivalled at this £999 price bracket. The likes of the Acer Predator Helios 300 offer similar specs at a similar price, but could the Dell G5’s more subtle styling win you over?

Just like its G3 sibling, at first glance it isn’t obvious that the Dell G5 15 is a gaming laptop. Those who aren’t fans of the flashy RGB look may be drawn to the G5’s design, but personally, I find it a little boring and lacking in personality.  The red and black colour scheme provides at least a hint that it’s aimed at the gamer market, but equally, this laptop could easily blend into an office environment without raising suspicions.

You’re unlikely to want to lug it into the office, though; the G5 weighs in at 2.61kg. It’s noticeably larger than the Dell G3, too, proving troublesome to fit in some rucksacks. This design choice has clearly been made to afford the internal fan more space to reduce the risk of overheating. Having said that, more powerful (and, admittedly, expensive) systems such as the Razer Blade 15 achieve this feat with lightweight frames. 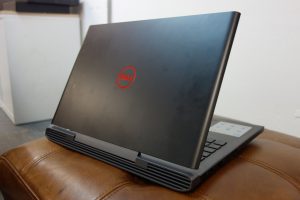 Most of the G5 15’s design choices seems to suggest a desire by Dell to keep the price of the unit down as much as possible. The bezel surrounding the screen is thick, while the lid displays much flex in the corners.

But while the G5 feels “budget” in terms of design, I’ve no concerns about it becoming damaged or breaking. Slam your fist on the shell or hurl it onto the floor in a Call of Duty-inspired rage, and I’m betting the Dell G5 will come through unscathed. 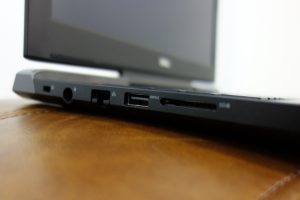 This laptop also has decent selection of ports. There’s room for Ethernet, HDMI, a USB-C, three USBs, SD card and headphone jack. With such an offering, I was able to plug in my keyboard, mouse, headphones and secondary monitor without issue.

Surprise, surprise – there’s no chroma keyboard here. The lack of colour contributes to the G5’s lack of charm, but those fed up of the dazzling light-shows often displayed by gaming laptops may find this appealing.

The G5 does at least have a backlit keyboard, although the white glow is so faint you could miss it. You really have to look at the keys from an angle, or sit in a dark room for it to be noticeable. 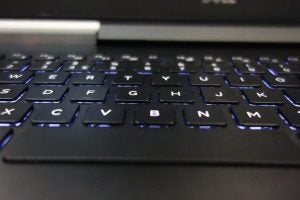 Of course, it isn’t just about looks. The keys do a solid job in terms of practicality, with sufficient travel that I was always confident each press had been registered. Obviously, I’d prefer the “clickity-clack” presses of a proper gaming keyboard, but the G5’s built-in keys are acceptable enough for the odd round of on-the-go Battlefield V.

You’ll also find a fingerprint sensor on the power button, so you can sign in via Windows Hello without having to type a passcode. 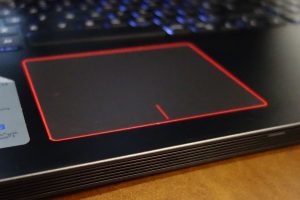 The touchpad, meanwhile, is fine. There’s plenty of room here, no matter how low you’ve set the sensitivity for your favourite first-person shooter. However, the surface isn’t quite as smooth and responsive as you’d find on more premium devices.

You might be wondering how Dell has managed to cram in such impressive specs into this budget-friendly gaming laptop. Turns out, there’s no magic formula – there have simply been cuts in other areas, most significantly the screen.

Almost all of the results spat out by the colorimeter were below par for the ideal laptop. The maximum brightness was underwhelming at 247 nits, as was the contrast with a 736:1 ratio. You’ll notice the lacklustre display quality most in darker scenes, especially with black levels of 0.3363 nits. You might want to avoid skulking in the shadows in Hitman 2. 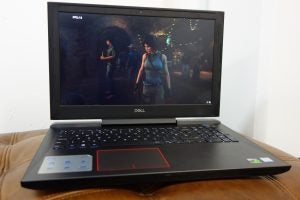 On a more positive note, the Dell G5 scored impressive results for the visual colour temperature, with a figure of 6492K just short of the 6500K sweet spot. This means that the G5’s colour temperature resembles that of natural daylight, rather than being overly warm or cool.

In terms of colour accuracy, the G5 was once again far from the required standard with a sRGB colour gamut of 54.8%. This isn’t a huge issue for gaming, but it does mean that the G5 is a poor option if you’re intending to use it for design work.

The G5 churned out even worse results for photography colour gamuts, proving that this isn’t a multi-talented machine – although I didn’t expect so given the G5’s (relatively) low price.

There’s only so much numbers can tell you about a screen, however. In reality, the G5’s display does a decent job for gaming. Don’t expect dazzling colours or a Retina-sharp display, but it isn’t so poor that you’ll grimace at the visuals. For top-notch pixel action, you could always plug the G5 into a secondary monitor.

So what does all of Dell’s corner-cutting get you? A powerful gaming laptop at a super-affordable price; you’ll struggle to find another laptop as fully specced without spending more.

As mentioned, you can pick between four configurations of the Dell G5, with each one housing either an i5 or i7 8th Gen Intel Core processor. You also get the option of Nvidia’s GTX 1050, GTX 1050 Ti and GTX 1060 (with Max Q design). The full range is listed below:

Our review unit boasts a Nvidia GeForce GTX 1060 with Max Q design graphics card, which is paired with Intel’s i5-8300H CPU. On paper, this specification is a downright bargain at £999. How about in terms of benchmark results? The figures look just as impressive.

The Dell G5 should be able to play almost any game in Full HD with settings cranked up to maximum. Unlike the G3, I never suffered a system crash with the G5, despite playing ultra-intensive titles such as Shadow of the Tomb Raider and Ghost Recon: Wildlands. 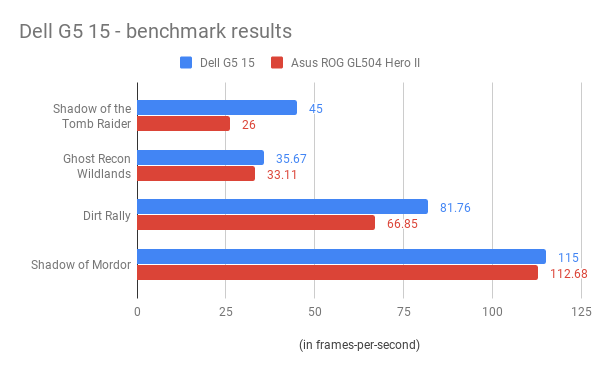 Frame rates were generally pretty solid, too. I was able to play Shadow of the Tomb Raider and Ghost Recon: Wildlands at 45fps and 36fps respectively in Full HD with optimum settings. That’s still some way off the 60fps target that most gamers aim for, but reducing the graphics presets to ‘medium’ saw those figures jump to 52fps and 65fps.

Compare these frame rates to those offered by rival gaming laptops, and the Dell G5 looks even better yet. The Dell G5 easily trumps the Asus ROG Strix GL504 Hero II, and the latter costing a whopping £500 more.

This is despite the Dell G5 offering lower benchmark results compared to the other laptops. With a Geekbench multi-score of 9342, the Dell G5 is one of the slowest gaming laptops available in this price bracket. The underwhelming but respectable PCMark 10 score of 2444 further emphasises the meek performance.

But since the benchmark scores don’t seem to have hampered frame rates to a significant extent, you’ll probably only notice the difference in more CPU-intensive games such as Civilization VI – or while editing photos or videos with software such as Photoshop.

The 3DMark: Fire Strike benchmark results show that the Dell G5 is much more competitive with its GPU performance. A 9569 score isn’t significantly behind the Asus ROG Strix GL504 Hero II’s result of 10,115. This isn’t too surprising: this Dell G5 houses Nvidia’s GTX 1060 GPU.

When pushed considerably, the Dell G5’s fans did make a fair racket, but nothing that a pair headphones can’t drown out. The fans did do a great job of keeping the Dell G5 cool, though: even when faced with the likes of Shadow of the Tomb Raider, it never became noticeably hot.

Meanwhile, read and write speeds are a little sluggish, coming in at 549MB/sec and 260MB/sec respectively. This means that the Dell G5 might be slow reading data compared to other gaming laptops – but for the price, you can’t feel too hard done by. The 128GB SSD and 1TB SATA storage at least mean you’ll be able to install a generous number of games before having to go on a Steam cull.

Battery life on gaming laptops is always considerably shorter than the average portable computer since its running such intense power. This isn’t a major issue, as you’ll most often have the device plugged in for the best gaming performance. Of course, it’s always nice to have a gaming laptop that doesn’t conk-out after a couple of hours for when you’re away from the mains.

I used the Powermark software to test the Dell G5’s battery life, which loops 10 minutes of web browsing and 5 minutes of video until the laptop runs out of juice. The Dell G5 lasted an impressive 5hrs 39mins, which is a few hours more than the average battery life of a gaming laptop. Of course, load up an AAA game and that figure will half, but it’s still admirable.

This also makes the Dell G5 a decent laptop for watching Netflix on the go – as long as you’re happy to lug around the 2.61kg lump, of course. 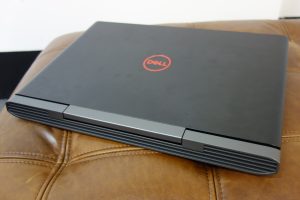 The Dell G5 15 is far from a premium device. Its design is dated and, let’s be honest, rather boring. The display isn’t fantastic either, with colour accuracy disappointingly low. And with gaming laptops continuing to become thinner and lighter by the day, the Dell G5 sticks out as a hefty beast.

These flaws are forgivable, though, especially when you consider how cheap the Dell G5 is compared to rival machines that offer similar performance. I failed to find a AAA game that would bring this machine to its knees when played in Full HD with optimum graphics settings.

In fact, the G5 isn’t only capable of playing intensive AAA games, but it even offers decent performance with frame rates exceeding the 30-mark for both Shadow of the Tomb Raider and Ghost Recon: Wildlands. Sure, this isn’t exactly the gold standard, but it’s a marvel that the G5 can get these games running in Full HD at all.

Add an impressive battery life to the mix, and you’ve got a no-thrills gaming laptop that gets the job done to a satisfying standard. If you’re not fussed about RGB lights and skinny bezels, and just want a laptop that can play your entire Steam library in Full HD, then you’ll struggle to find a better value gaming laptop than the Dell G5.

The Dell G5 is one of the best-value mid-range gaming laptops on the market, capable of playing any game you throw its way in Full HD. Just bear in mind you’ll have to put up with a bland design and sub-par display to appreciate this bargain.