What is the Acer Predator Helios 300?

The Acer Predator Helios 300 is a surprising slab of a laptop. With its aggressive name, gaming brand and huge screen, you’d be forgiven for believing it was one of the market’s bank-busting gaming systems – but this unit costs a reasonable £1300.

For that mid-range price you get a solid specification, a pleasing design and a 17.3in screen, so there’s certainly a lot of laptop here for the money.

The Helios 300 NH-Q2MEK.004 mixes modern touches with the sort of design I’d associate with more traditional gaming notebooks, which means it more than looks the part.

The Predator’s body is built from black metal, and across most of its surfaces it’s treated with a matte finish – aside from the lid, which has a subtle brushed effect. It’s reminiscent of its nearest rival – the Asus ROG Strix GL702VM. That system combines dark metal with orange, and it too banishes outdated and glossy metal for a more subtle approach. 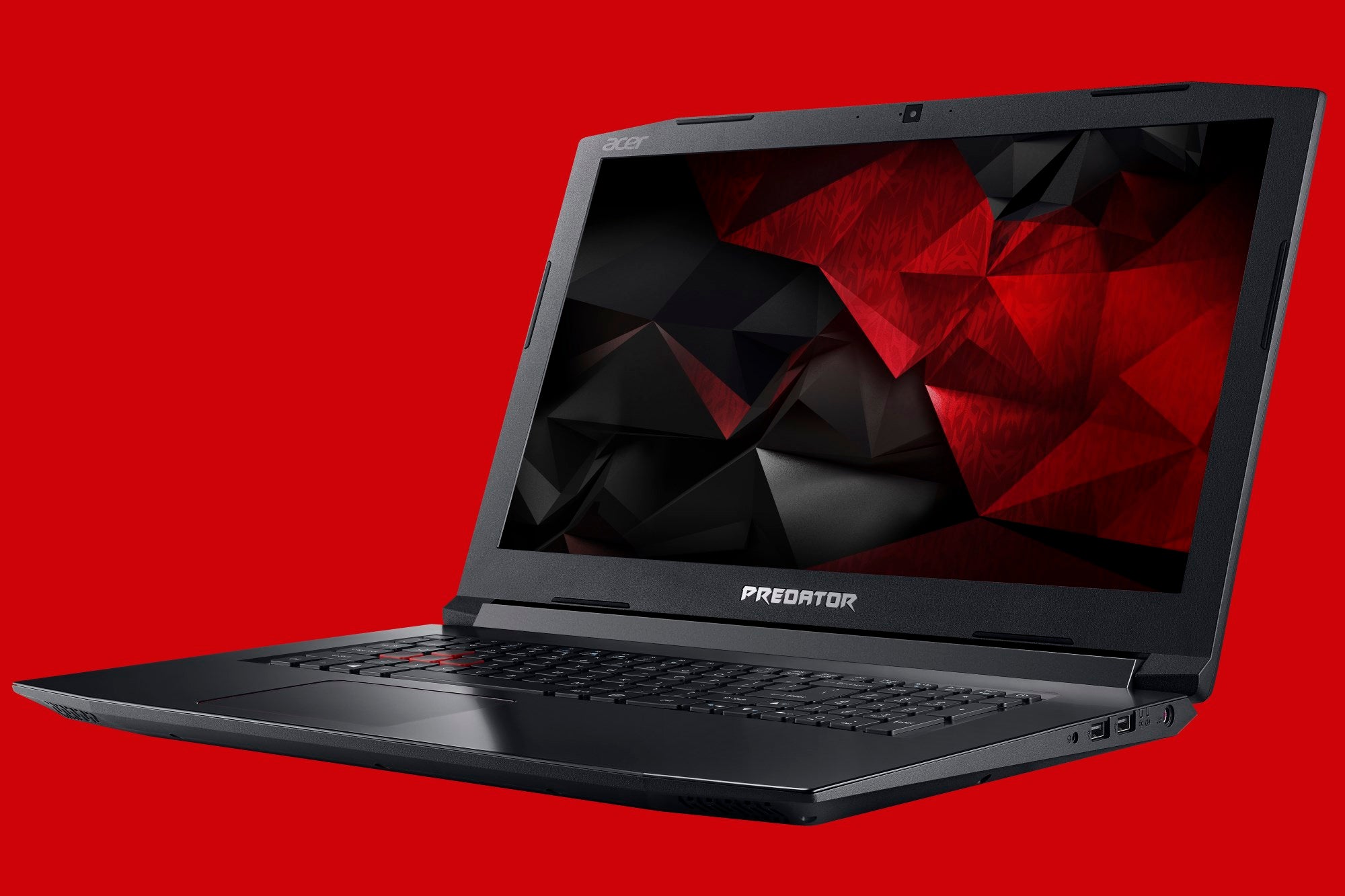 That’s not to say that Acer’s machine is reserved. Its lid features red slashes and a bold logo, and the back edge houses dramatic air vents with red borders. There’s more red around the keyboard and trackpad, and another Predator logo beneath the 17.3-inch screen.

It’s a good-looking machine that weighs just under 3kg and it measures 29mm thick. Those figures aren’t back-breaking, although the Asus was about 300g lighter and half a centimetre thinner.

Build quality is one area where the Predator does fall down slightly. The metal on the base of the machine is too thin and depresses easily, and the screen is wobbly. I’d be careful taking this machine out on the road. The Asus system was similarly flimsy.

The Acer has the usual selection of ports, including USB 3.1 Type-C, and two panels on the base allow for access to the hard disk and memory slots – something lacking in the Asus.

The red-lit keyboard is a Scrabble-tile unit afflicted with many of the usual traits that make such units great for typing but only mediocre for gaming.

The Acer’s keyboard has a sturdy base, which is a good start, and the buttons are quiet and consistent, with impressive typing speed. However, they’re soft and offer very little travel, which means they don’t feel firm enough during fast-paced gaming sessions. 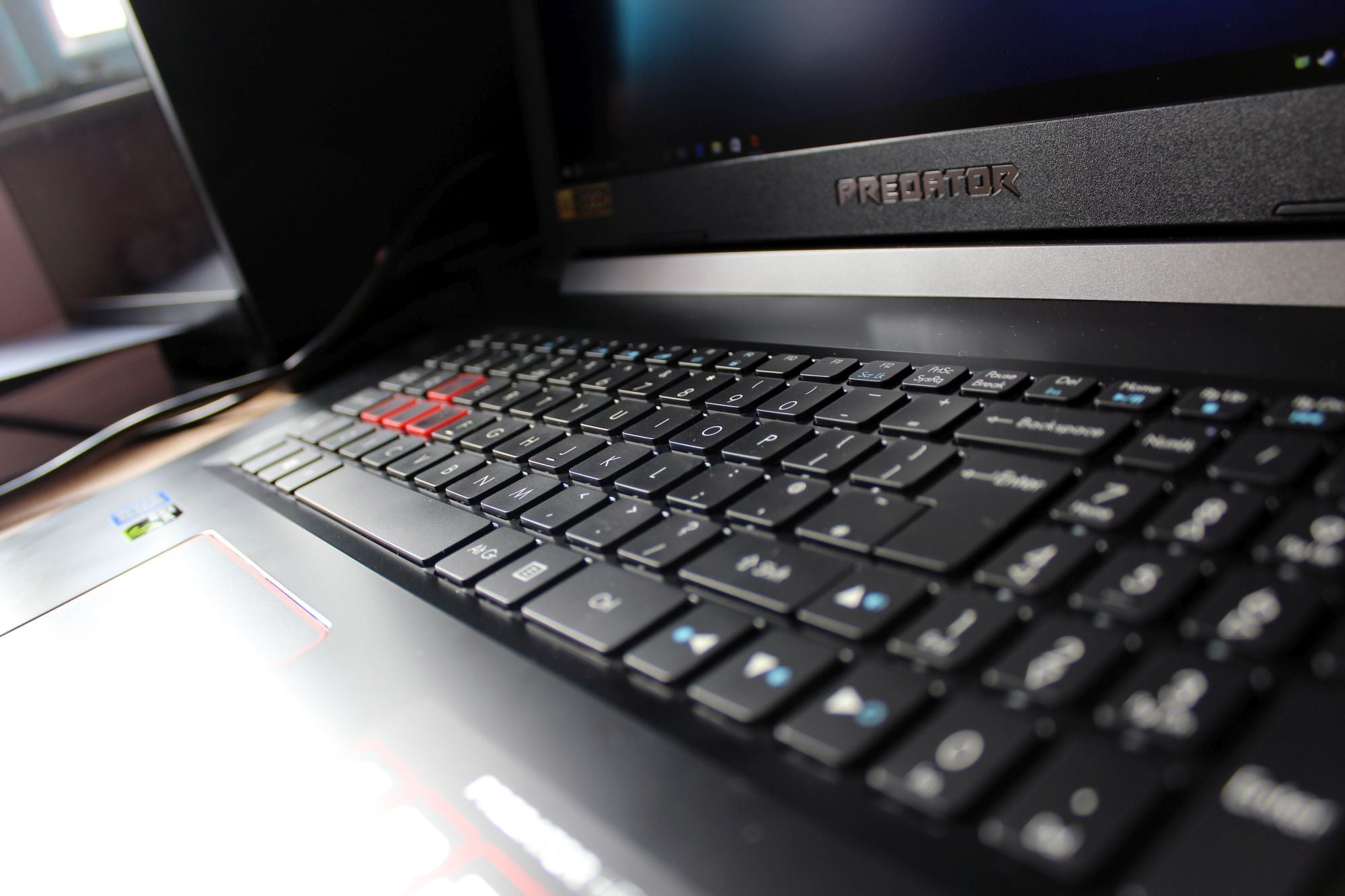 The Asus machine has a similar keyboard, albeit with a bit more travel, and so its gaming prospects are just as middling.

The keyboard layout here is disappointing, too. The Acer’s 17.3-inch frame means there should be plenty of room for keys, but the cursor buttons are narrow and cramped, and the situation is the same with both Shift keys and the Return button. It isn’t a big issue, especially once you’ve become used to the keyboard, but it’s a little puzzling.

The trackpad is certainly large enough, but its buttons let it down. They depress too far, and the action isn’t consistent – there’s a noticeable “bump” half-way down the mechanism. Ironically, that’s what some people prefer in mechanical keyboards, but the Acer’s soft and bumpy button presses are a long way from the fast and shallow action that I prefer for mobile gaming.

The Predator’s 17.3-inch screen dominates a desk. It has a 1080p resolution, which is fine for a laptop this size, although getting close to the panel does reveal the lack of sharpness. This was seen on the Asus too.

The refresh rate peaks at 60Hz, which is the same as the Asus, but the latter laptop also had Nvidia G-Sync, so it could synchronise GPU output and monitor refresh rates at up to 60fps. That’s ideal for a GTX 1050 Ti machine, but the Acer misses out – even though it costs about £200 more than the Asus. As a result, gaming won’t be quite as smooth on the Predator.

The Acer’s benchmarks are solid and consistent. The brightness level of 397 nits is one of the highest figures I’ve seen from a gaming notebook, and the black level of 0.47 is fine – a tad high, but not so bad that it’s going to cause issues. 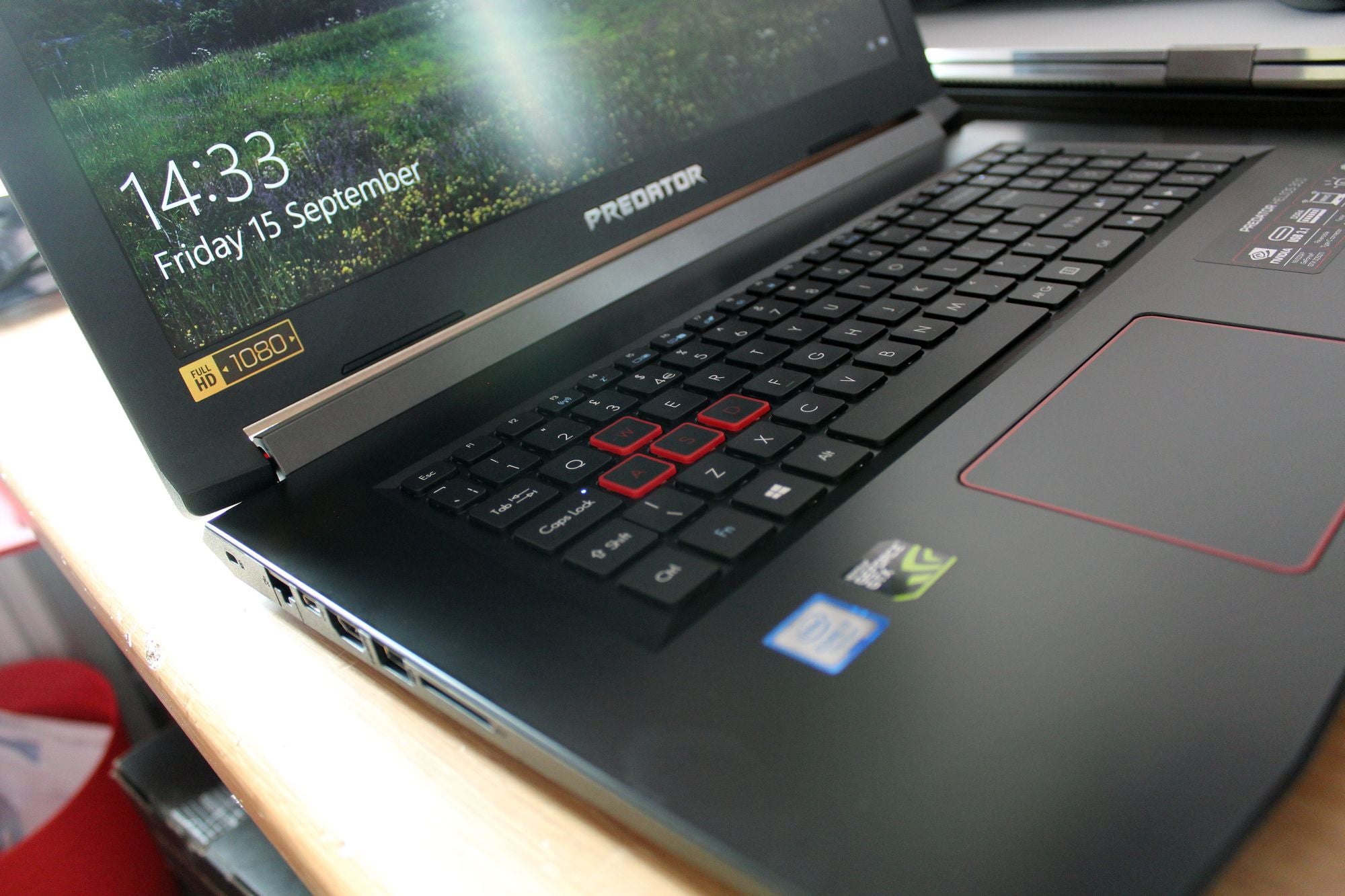 Black shades will look dark enough, and those results create a contrast ratio of 845:1. That’s a middling result and, again, it won’t interfere with games. That said, the Asus offered a better contrast ratio and black level, making it look a little broader and more vivid.

Viewing angles are good on this IPS panel, and there were no serious uniformity issues. The Acer’s screen is a little better in terms of colours than its rival but a little poorer on contrast – the lack of G-Sync. The Acer’s panel isn’t bad, but I reckon the Asus’ screen is just that bit better.

The speakers offer up plenty of volume, but the range is dominated by the vocals, which managed to sound a bit flat while pushing every other noise into the background. The mediocre audio output can’t be managed or tweaked by software, either –so I’d definitely switch to a headset.