Civilization VI is the best in the series to date. That’s no mean feat for a franchise with such a revered lineage, but the changes, refinements and additions that developer Firaxis has made create a game that’s not only complex and deep; it’s fun, exciting and unpredictable over the course of dozens of hours of play.


Despite its various changes, this is still undoubtedly Civilization. You still establish cities, expand an empire and grow an army. You continue to research scientific and cultural upgrades in order to plot a custom-made path through history, all the way from the ancient era to the space-age. Diplomacy, religion, trading – it’s all here at launch, making for the most feature-packed Civilization game, perhaps ever. 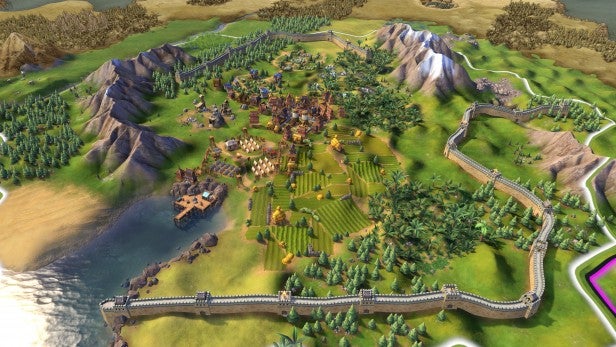 It’s the most beautiful, too. I’m sure it’ll divide opinion, but a more colourful and cartoonish art style brings more character than ever before. Its great voice acting, wonderfully emotive animations and some fabulous character design gives every single world leader a sense of real personality, and the map itself is just as gorgeous. A day/night cycle and subtle little movements bring each tile, district and civilisation to life, from the way the ocean laps against the shores to the glinting gold of a sunset on the river that bisects your empire.

This extends to the minutiae details, from the way the glow from your lighthouses reflects off nearby structures, to the chickens that occupy a granary. A particular treat are the different musical themes for each individual civilisation, from soaring strings to sombre harpsichord motifs.

The biggest mechanical change in Civilization VI is the “unstacking” of cities, i.e. the spreading out of improvements across a much larger play space on the map. This not only looks better – giving each of your key buildings the chance to stand out from your city centre – but it greatly enhances the level of decision making. It’s awesome to see your scientific buildings crop up within your Campus and a stadium appear in your Entertainment District, but it’s similarly engrossing to plot out a path for your civilisation’s advancement. 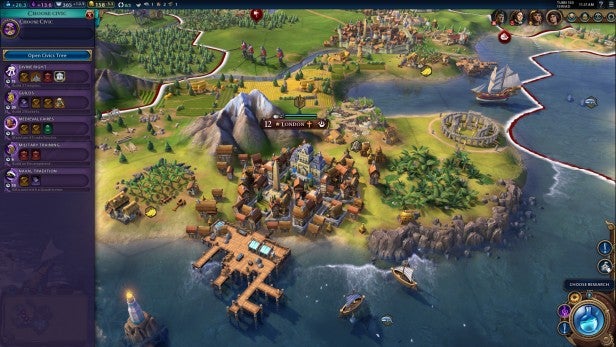 To do this, you have to play the map as much as you play your opponents. While you’ll be constantly managing diplomatic relations with Peter of Russia, or Frederick of Germany, you’ll also be making vital decisions to how your cities expand. Rather than just plonk a capital city on the coast, you’ll have to employ a large amount of foresight in order to win – place a District in an inopportune place and it could change the stakes for centuries to come. Each tile has a number of different factors, each of which affects what you can build there – a Wonder like the Pyramids of Giza can only ever be built on a desert tile, for example.

At first this can be confusing, even frustrating, but Civilization VI’s fantastically designed UI makes all of its complex choices and systems feel the most approachable that they’ve ever been. Other integral facets to play are also easier to manage. Trading is now somewhat automated, with roads appearing as your traders move between the different cities you’ve assigned them to, just like they would in real life. Espionage is similarly simplified, but still remains in-depth and complex in how you choose to assign your spies to steal technology, gain information or defend your own cities from attack.

Civilization VI’s most impressive achievement is how it populates every stage of the game with meaningful decisions. In the past, there was often a lull as you entered the mid to late game stages, having established a handful of cities, but this seems to have been minimised a great deal. Not only do the Districts and Wonders keep you on your toes as you plan where to build and how to upgrade, but there’s a constant juggle of diplomacy, exploration and combat (should you choose the path of war) to keep you busy at almost every stage.

This is further diversified by the new progression trees. While previous Civilization games had a single Technology tree to guide your people through history, Civilization VI splits all of your progression options into two entirely separate trees. The new path, called the Civics tree, features all of your cultural and political options for progression and it opens up a pursuit of victory by adding interesting and exciting new ways to define a campaign. From the Drama & Poetry upgrade that lets you construct a Theatre Square, to the different requirements needed to establish the game’s various Governments, the Civics tree is a hugely important part of any game and it removes the tunnel visioned approach to upgrades of Civ games past. 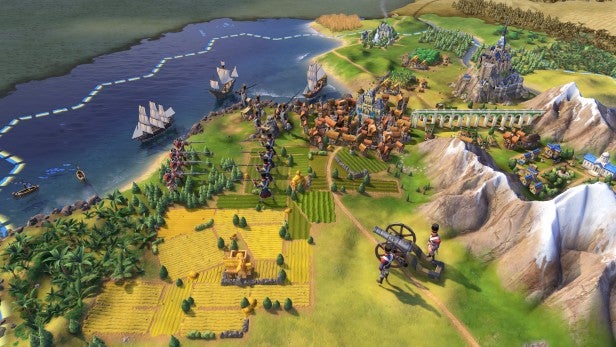 These Governments are all unique, providing your civilisation with a number of different boosts and perks depending on what one you choose. Theocracy and Autocracy are entirely different, for example, with a different arrangement of card slots that you can fill with perk-giving policy cards (military, economic, diplomatic and wildcard). These policy cards grant further bonuses and are also earned by progressing through the Civics tree; it’s a fundamental part of your civilisation, and one that adds an extra layer to the already multi-dimensional strategy experience.

Perhaps the game’s greatest new feature are the ‘Eureka!’ moments. These single-objective quests are tied to every single scientific and cultural research point, and reward you by halving the time taken to research them by completing a task. If you’re a civilisation that’s settled on the coast, you’ll find that you research sailing much faster, while you’ll research certain military upgrades if you’ve killed three sets of barbarians. It’s a simple, smart system that not only provides something to do at every single stage of the game, but which rewards you for it in a way that’s vital to a victory.

Related: Nintendo Switch revealed – everything you need to know

Victory conditions receive a significant shake-up, with Diplomacy ducking out and Religion stepping in. The latter isn’t quite as fleshed out as maybe it should be, and it becomes a case of spamming other civilisations with your theological units in order to spread your faith into their ranks, but theological combat itself is pretty cool to watch; there are hints of Age of Mythology’s combat as your Apostles cast down lightning from the heavens in order to wipe out any heretics. If anything, Religion is the only part of Civilization VI that feels it may be tweaked a little in any expansions.

While Diplomacy has disappeared as a victory condition, Firaxis refines and improves the diplomatic systems at play to create the most fleshed out version in any Civilization game yet. Rather than try to create a human player in an AI, Civilization VI now employs different Agendas to give behavioural traits to its individual leaders. Each leader has two apiece – the first is a historical trait, based loosely on their time in rule. Frederick of Germany hates City States and those who ally with them, while Philip of Spain detests any civilisation that follows a religion other than his own; he absolutely hates it if you start to spread your faith into his ranks.

The second agenda is hidden and randomised, adding unexpected behaviours to every single leader in the game. This opens up diplomatic diversity a huge amount, giving each personality their own tangible behaviour patterns while also giving individual campaigns their fair share of unexpected scenarios. And that’s without mentioning the raft of new details visible in the diplomacy screen, from the way you can use spies as bargaining chips should they be caught in the act of, well, spying, to the different forms of war you can engage in, each of which results in varying warmonger penalties.

Strategy games live and die on the complexity and satisfaction of the countless decisions made within them, and it’s here that Civilization VI stands tall. Where its predecessors laid the foundations and systems of play, this is a game that refines and perfects them to a remarkable degree. It’s not without a couple of flaws – the odd diplomatic quirk and some religious spamming are its most notable – but Civilization VI gives the series’ 20-year Anniversary the hurrah it deserves. It’s a game that celebrates the genre while fundamentally improving it, and it comes in a package that is simultaneously attractive for newcomers while being exciting for Civilization veterans.