While we still await laptop, tablet and smartphone makers to jump on the bandwagon, there is no doubt the 802.11ac revolution is now well underway. Having seen next generation routers from three of the big four manufacturers (Netgear, Linksys and Buffalo) it is now left to D-Link to complete the line-up.

It does so with the Cloud Gigabit Router AC1750, also known as the D-Link DIR-865L. As with all descriptively titled products, the name gives much of the game away. The D-Link DIR-865L features 802.11ac at up to a theoretical 1300Mbit (the remaining 450Mbit comes from 802.11n theoretical performance being tacked on top), Gigabit Ethernet and the company’s ‘mydlink’ Cloud platform. As a premium router, the D-Link DIR-865L also features dual channel 2.4GHz and 5GHz bands. The former is 802.11b/g/n compatible while 802.11n/ac work on the latter. 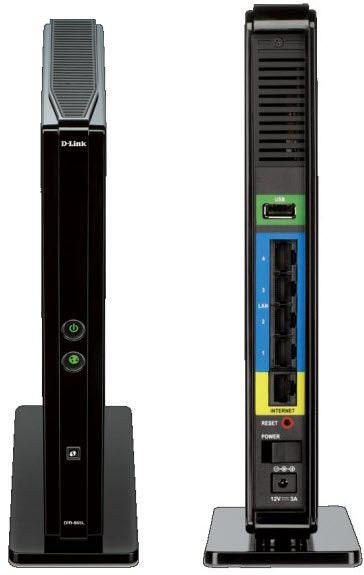 With most 802.11ac routers manufacturers going big on plastering 802.11ac logos all over their packaging along with its “three times faster than Wireless N’ slogan, but remaining far from radical in their designs, D-Link is no different. The D-Link DIR-865L is a big rectangular block measuring a sizeable 240 x 167 x 32mm and weighing in a 550g. Happily is continues the recent trend in dumping external antennas, but it also continues the less welcome pattern of only sitting one way round – in this case in a portrait alignment.

Like most other rivals, D-Link also continues to fit just four Gigabit Ethernet ports to its routers and a single USB 2.0 port for networking a hard drive or printer. In this day and age six and two would seem a more sensible arrangement. USB 3.0 would be welcome as well, but v2.0 isn’t yet a bottleneck for most networking performance.

As for build quality it is reasonable, if in the usual vein of 100 per cent plastic casing for the obvious signal-related reasons. What we don’t like is the return to the bad old days of a shiny, fingerprint magnet piano black and it has some way to go to match the slick, matt finish and curved lines of Linksys’ routers which remains the benchmark for router designs at this time. In short the D-Link DIR-865L won’t offend, but it won’t inspire either. 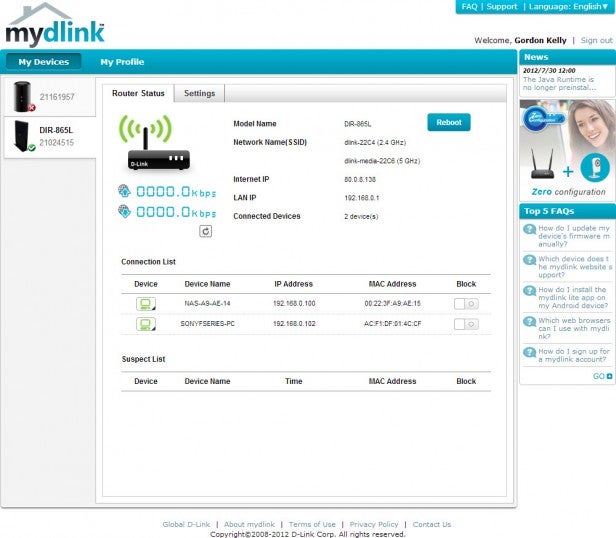 Happily the lack of drama in the D-Link DIR-865L’s looks is also found in the setup process. Like Cisco, D-Link has unveiled a Cloud platform (‘mydlink’) and while this offers a convenient setup route for mainstream users, the more tech savvy still have access to the tried and trusted D-Link router UI over an internal IP address.

As for mydlink, it allows users to access router settings. This includes adding/blocking devices and setting up email alerts when new devices connect to the network, fail to connect or if there is new firmware available. These options can also be done over apps for iOS and Android. For now the service is rudimentary and the options certainly don’t match that of Cisco’s Connect Cloud, but it is a nice bonus which will no doubt evolve substantially over the coming months.

If the D-Link DIR-865L can deliver in terms of performance, and for the most part it does, then none of this really matters. Interestingly D-Link is the first company to bring an 802.11ac USB dongle to market, the ‘Wireless AC Dualband Adaptor DWA-182’, so for the first time we were able to drop the frustrating router/bridge setup. It is a fatty though so be aware that if your USB ports are positioned closely together (either horizontally or vertically) it will block them off. 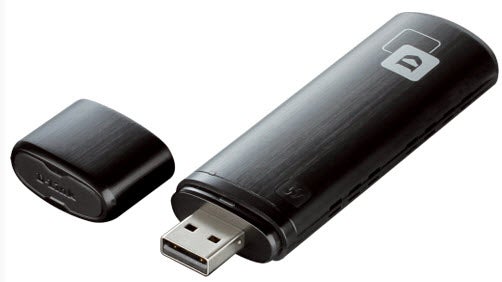 Still the headline news is naturally the 802.11ac performance and at our regular distances of two metres, 10 metres (line of sight) and 13 metres with two solid walls in between, the D-Link DIR-865L delivered consistent peak speeds of 26.5MBps (pictured below), 24MBps and 23MBps aka 212Mbit, 192Mbit and 184Mbit. Compared to its rivals the peak speed is beaten by both the Netgear R6300 (32.8MBps) and Linksys EA6500 (30.2MBps), but its performance at range is hugely impressive staying in line with the EA6500, which is the benchmark for everyone to date.

There is a fly in the ointment, however. D-Link doesn’t state that the DWA-182 must use its own brand 802.11ac routers, but when connected to Linksys and Netgear 802.11ac routers performance dropped off roughly 70 per cent. Whether this is due to the pre-ratified status of 802.11ac causing incompatibilities or D-Link pulling a fast one we don’t know, but for now or at least until firmware updates arrive, the first USB 802.11ac USB dongle should only be used with the D-Link DIR-865L and that’s a disappointment. 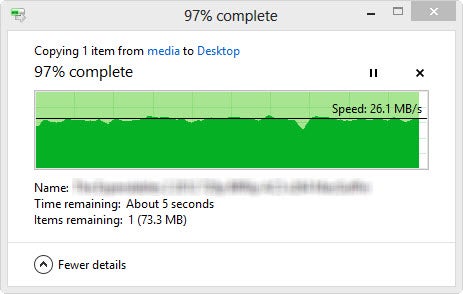 Back to testing though and when it came to 802.11n over 5GHz the D-Link DIR-865L’s performance was again strong coming in at consistent peaks of 20MBps (160Mbit), 14MBps (112Mbit) and 12MBps (96Mbit) which sees it only slightly behind the Linksys EA6500 at two metres and 10 metres. That said at 12 metres with two solid walls in between it actually set a new high beating the 10.4MBps of Linksys’ product. This also places it well ahead of the 802.11n 5GHz speeds we have seen from Netgear’s R6300 and the now lagging Buffalo AirStation 1750.

The problem is 802.11n performance over 2.4GHz is weak. Peaks of just 7MBps (56Mbit), 3MBps 24Mbit) and 0.9MBps (7.2Mbit) (below) were the best we achieved at our three distances and all fluctuated greatly which would certainly affect HD video streaming. Furthermore this not only falls well short of the 8.1MBps, 5MBps and 3.9MBps achieved by the EA6500, but also behind the best performing 802.11n 2.4GHz dedicated routers like D-Link’s own D DIR-645 which is a fraction of the cost. 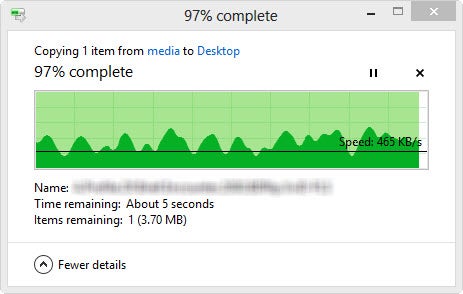 Of course as devices move over to the 5GHz band this will be less of an issue, but 2.4GHz remains by far the most common standard right now so if you have older key equipment this should eliminate the D-Link DIR-865L from your thoughts. This is a shame as D-Link has essentially got the hard part right and messed up the easy bit. D-Link is clearly aware of this problem as it has issued a firmware update to try and specifically bolster 2.4GHz performance, but our test results were achieved having upgraded to it.

All of which makes the value section particularly
frustrating because D-Link has continued its tradition of making keenly
priced products with the D-Link DIR-865L coming in at just £125. This is £64
less than the Linksys EA6500, £45 less than the R6300 and £10 less than the
Buffalo AirStation 1750 which is now a fair way off the pace of the newer
802.11ac routers. Having a Cloud platform makes the D-Link even better
value, even if it remains someway behind the slick integration of
Cisco’s Connect Cloud. 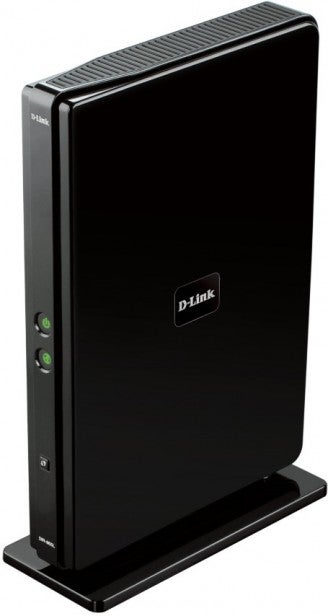 Of course what does have immediate appeal
is the setup with the D-Link DWA-182 priced at £45 which is far less
than buying a dedicated bridge and far more convenient. That said it can
be used with any 802.11ac router so it doesn’t necessarily make the
D-Link DIR-865L specifically more tempting. In short: if you have mostly newer
equipment the D-Link DIR-865 will prove a star buy, but if you are using a lot
of 2.4GHz kit then this otherwise superb router is not for you.

D-Link
has a lot to be proud of with the D-Link DIR-865L. 802.11ac and 5GHz 802.11n
performance, particularly at range, is outstanding, the setup is simple
and the mydlink Cloud platform – while basic – is a nice extra. The
asking price is also a new low for 802.11ac routers. Its Achilles heel,
however, is performance over 2.4GHz and if you have predominantly older
equipment then the D-Link DIR-865L is unlikely to be a worthwhile upgrade. Of
course while we await the first gadgets with 802.11ac built in, all
802.11ac capable routers remain the primary interest of those on the bleeding
edge and for them it is a new price/performance champion.