Update 21.06.2012 Buffalo has substantially changed the pricing of both the router and media bridge since this review was published. The previous £199.99 RRPs for each device have been changed to £139.99 for the router and £129.99 for the bridge. Furthermore retailers are undercutting this new price with Dabs and eBuyer currently both selling the router for £124.98 and the bridge for £114.98 and £109.99 respectively. With such a difference we have adjusted the value rating given to the product to reflect this and with it now having no premium compared to a high end 802.11n router it has earned a higher overall score and a recommended award.

Welcome to the bleeding edge, the place where next generation technology awaits, along with quite a few paper cuts. Leading us to this exciting yet sometimes infuriating region this time is Buffalo, which has become the first company to ship a router and network bridge compliant with 802.11ac Wi-Fi. 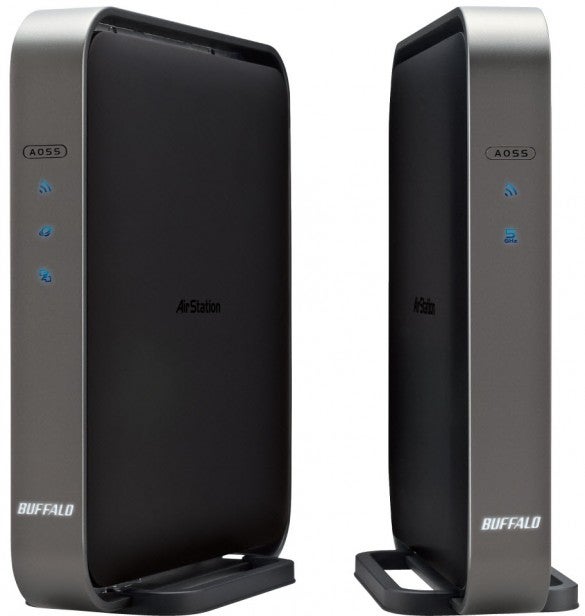 Next Generation WiFi
The brief on 802.11ac is simple: it is the long-awaited successor to 802.11n and it promises data rates beyond 1Gbps (125 megabytes per second) over the still little used 5GHz band. It also claims to offer increased range to eliminate dead spots around the home. The fly in the ointment is the 802.11ac standard has yet to be finalised and (much like ‘Draft N‘ devices) impatient companies are already starting to ship ‘Draft AC’ equipment with the promise of future firmware updates to bring it into line with the finalised standard whenever and whatever that may be. In addition there are currently no 802.11ac laptops, tablets, phones or even USB and PCI cards on the market.

Which brings us back to Buffalo and its catchily-named AirStation 1750 Wireless 802.11n 11ac Gigabit Dual Band Router WZR-D1800H-EU (above, left). In order to immediately enjoy its next gen connectivity it has also launched the equally snappy ‘AirStation 1300 Wireless 802.11n 11ac Gigabit Dual Band Media Bridge WLI-H4-D1300-EU’ (above, right). This acts as a receiver for the router’s ac Wi-Fi and has four Ethernet ports on the back to connect devices. It is a workaround, but for the likes of NAS boxes, media players, desktop PCs and other devices that a) don’t have integrated Wi-Fi, or b) tend not to move around, it is a smart and completely driverless one. 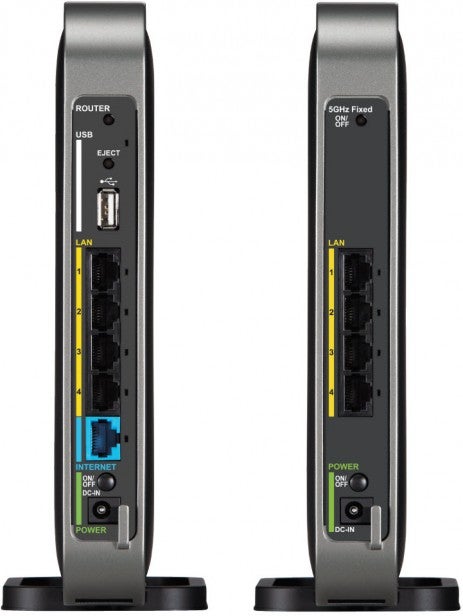 The D1800H router has five Gigabit Ethernet ports (4x LAN, one to connect to the modem), a USB 2.0 port for attaching a printer or storage device to the network (along with a dedicated ‘Eject’ button) and support for WPA2-PSK AES security. Oddly IPv6 compatibility is missing from launch though.

Design
So how do router and receiver look look? In a word, identical. Buffalo has decided to twin the designs which both use discrete antenna bands around their rectangular exterior and they have smart matt black and metallic finishes, which should keep the dust away. At a matching 210 x 184 x 30mm they aren’t overly huge and are equally happy positioned upright or on their sides. Build quality is excellent and they feel durable in hand. 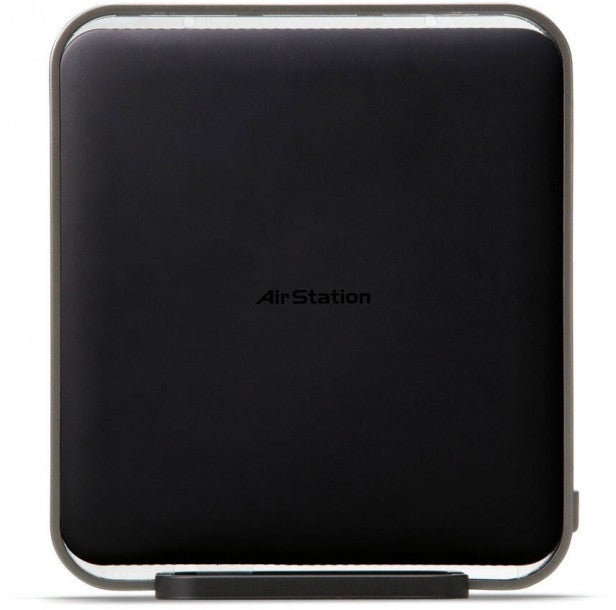 Setup
Where we did hit our first snag though was in the setup. On paper Buffalo has made it simple to get both the router and media bridge up and running with each featuring an ‘AOSS’ (AirStation OneTouch Secure System) button that simply requires pressing a button on each to pair them. Unfortunately for us a successful pairing required two restarts and a reset and they need to be re-paired any time one is unplugged. Happily further attempts saw pairing work as advertised so we are happy to put it down to a glitch having not seen widespread reports of similar issues elsewhere.

Next is the router UI and, for such a future-focused device, it feels like stepping back in time. In short the browser based interface looks like something from the early days of web page design with garish colours, ugly fonts and an inconsistent layout. It isn’t lacking in functionality, but it is far less intuitive than it should be and a far cry from the fluid UIs from the likes of D-Link and Netgear. It needs a complete makeover. 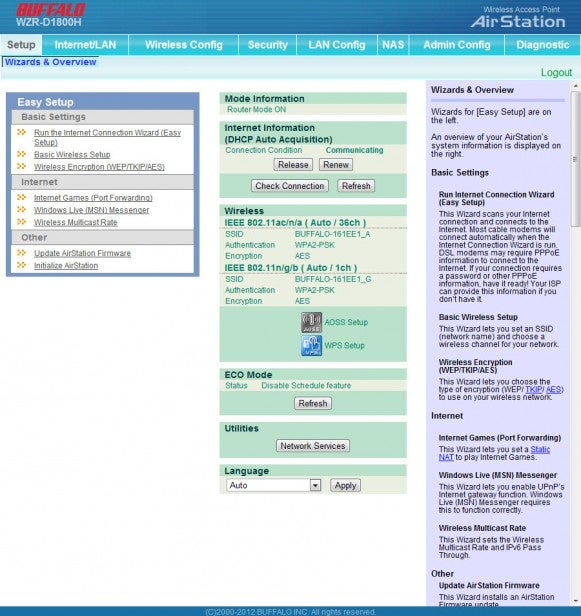 Performance
Happily where the Buffalo AirStation 1750 D1800H and D1300 combo does come up trumps is performance. With the router and bridge just two metres apart we achieved real world 802.11ac transfer speeds of up to 26.7MB per second (213.6Mbit) which obliterate our previous benchmark of 10.3MBps (82.4Mbit) from the D-Link DIR 645 Smartbeam router. This lead widens further with distance. At 10 metres with a solid wall between router and bridge we still hit speeds of 16.2MB per second (129.6Mbit) compared to 5.61MBps (44.88Mbit) from the DIR-645.

Pushing this further we found our first major drop off when positioning the router and bridge 13 metres apart with three walls between them. In this scenario transfer speeds only peaked at 4.2MB per second (33.6Mbit) which – while still much faster than the 2.57MBps (20.56Mbit) achieved by the DIR-645 – showed range issues for some users with large houses may remain. That said we were still able to reliably stream 1080p video from our NAS.

All of which leads to a sizeable caveat. Since the Buffalo AirStation 1750’s D1800H and D1300 are the first 802.11ac devices we have tested we have no context for comparison and putting it against even the fastest 802.11n router is comparing apples with oranges. As such the Buffalo combo is fast, but it remains to be seen how it does in the mix when other 802.11ac kit starts hitting the market.

Emphasising the importance of this question is the Buffalo D1800H’s 802.11n wireless performance. At 2.4GHz we found it to be significantly slower than the DIR-645 at both two metres and 10 metres with a wall between it, hitting peaks of just 4.2MB per second (33.6Mbit) and 2.68MB per second (21.44Mbit) respectively. Over 5GHz 802.11n speeds only improved by about 20 per cent so if you plan to replace your main router know that performance won’t be stellar when you’re not connected to the bridge… at least until 802.11ac devices, dongles and cards are launched.

Value (updated: 21.06.2012)
So how much does a future proofing investment cost? Less than we expected. With a £139.99 RRP the D1800H carries very little premium compared to a high end 802.11n device and while n performance is lacking the future proofing it provides should make it the more attractive buy. As for the media bridge this is a reasonable £129.99 for those desperate to unlock the potential of 802.11ac right now. Our one note of caution is that as the first of many 802.11ac routers on the horizon it may well be worth waiting to see what the competition come up with first before splashing out.

Verdict (updated: 21.06.2012)
The Buffalo AirStation 1750’s D1800H router gives a tantalising glimpse into the future of Wi-Fi. Combined with the D1300 media bridge it produces speeds far beyond anything we have seen from 802.11n equipment. Having to buy a separate media bridge to enjoy is frustrating, but with the router coming at a small price premium it is a wise buy even without it for some future proofing. Against this we don’t yet know how fast the D1800H is compared to other ac routers as we await their arrival and 802.11n performance is weak. Impatient speed freaks should apply, but for everyone else it will be be worth waiting to see what the competition comes up with in the first wave of 802.11ac gadgets.