Not what you’d call an unqualified success, but the Cleer Crescent is a diverting alternative to the established ‘big, expensive wireless speaker’ front-runners. When will the ‘mkII’ be ready?

If ever a product was indicative of its manufacturer’s optimism, the Cleer Crescent is it. The world, as we are all aware, isn’t short of smart speakers – but the world isn’t what you’d call oversubscribed with big, ostentatious smart speakers that cost a significant sum of money.

And in case that shape, those dimensions and that price tag aren’t enough to convince you of Cleer’s confidence, the Crescent is – for now, anyway – available only in a ‘champagne’ finish. You’re invited to read ‘champagne’ as ‘gold, like the badges on a drug-dealer’s Lexus’.

Naturally, the Crescent is specified to offer some justification for that ambitious price. But while stand-alone speakers this expensive remain fairly thin on the ground, the Crescent is still going up against established favourites like Bowers & Wilkins’ equally arresting Formation Wedge, Naim’s Mu-So Qb2 and Devialet’s profoundly bonkers Phantom Reactor. Has Cleer given the Crescent what it needs to compete?

The Cleer Crescent is on sale now, and in the United Kingdom it’s priced at £699. Naturally enough, given Cleer is a California-based company, American customers will need to fork out $699. In Australia, meanwhile, a price has yet to be confirmed, but we reckon Australian consumers are looking at AU$899 / AU$1249. Which is hedging our bets somewhat, we’ll concede.

There are lots of words that might apply to the way the Cleer Crescent has been designed, but ‘discreet’ isn’t one of them. In its own way, this big speaker (119 x 660 x 184mm, HWD) is just as assertive a design statement as Bowers & Wilkins’ Formation Wedge. It will draw attention to itself even before it’s begun making a sound.

‘Crescent’ isn’t the first thing I thought of when I took the Cleer speaker from its (necessarily large) packaging. It reminds me of nothing more than one of those covered junks you see traversing the waterways of south-east Asia – but the swoopy, curvaceous lines invite you to project your own interpretation onto them. 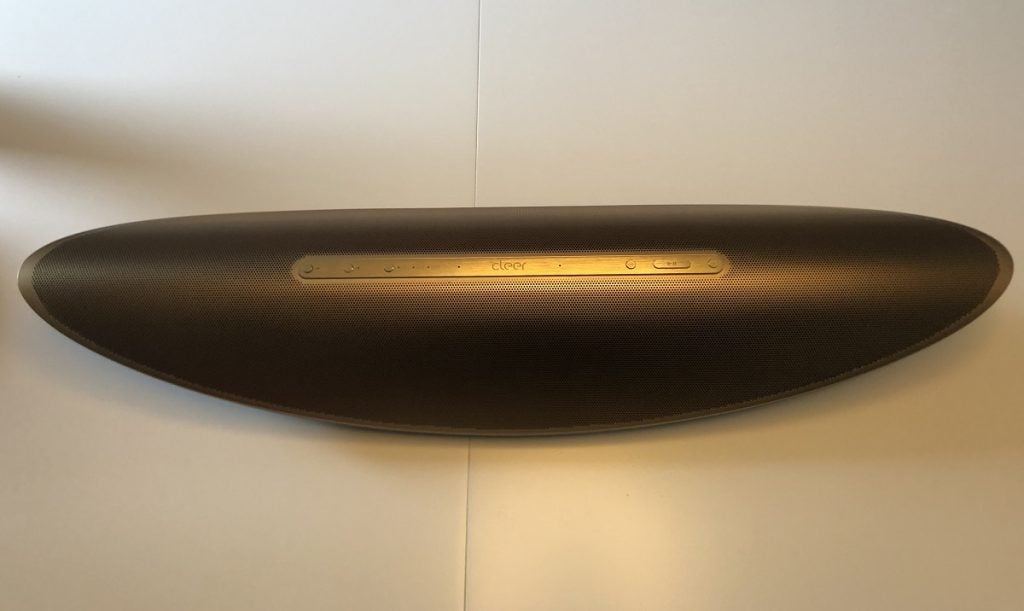 As is essential in a product costing this much money, the build and finish of the Crescent are pretty much flawless. The perforated aluminium top-plate joins perfectly to the plastic lower section; there isn’t a sharp edge or unhappy angle in sight. The strip of physical control buttons along the top of the Crescent is integrated smoothly.

You’ll make your own mind up about that ‘champagne’ finish, especially the way it harmonises (or doesn’t) with the lower half of the speaker that’s brown plastic. But no matter what you think of the way the Cleer Crescent looks, you won’t mistake it for any other company’s smart speaker.

Cleer Crescent features – All of this and more

Cleer’s avowed intent with the Crescent is to deliver room-filling audio, and to that end the Crescent comes with 10 speaker drivers in total: eight 40mm full-range drivers and a couple of 84mm bass drivers, reinforced by a pair of bass reflex ports that vent from the rear (where the physical inputs and mains power are placed) of the cabinet. 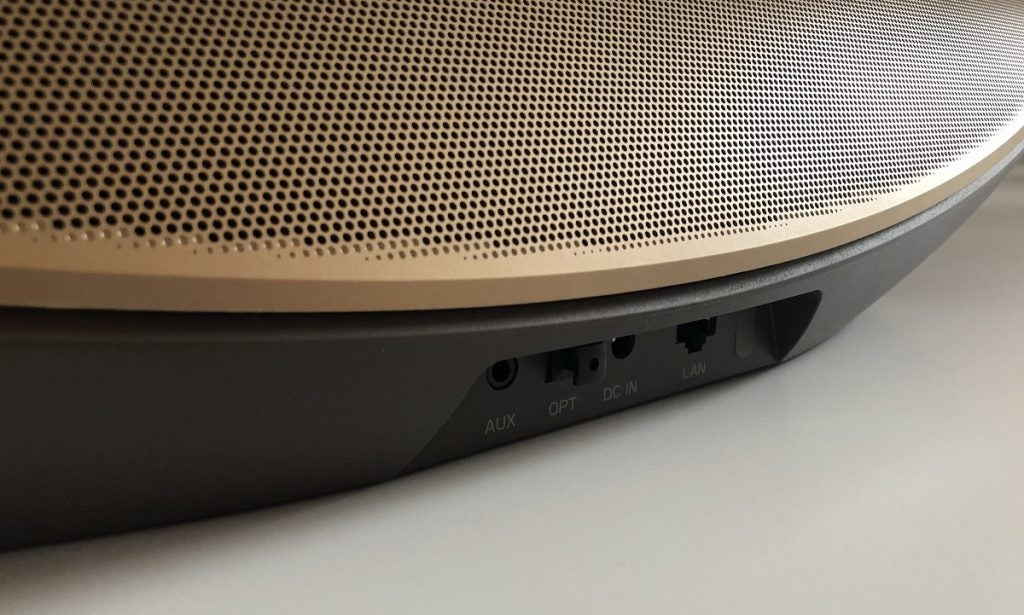 Each of the smaller drivers is powered by 8W of Class D amplification. They’re arranged in a vague crescent shape along the front of the cabinet, where the vaulted nature of the design allows them a little breathing space. The two big bass drivers, meanwhile, enjoy 25W of power each; they’re angled to fire upwards through the rear of the enclosure. The sum of 114W isn’t to be sniffed at – certainly not if they’re deployed effectively.

In terms of getting music (or whatever) on board in the first place, the Crescent isn’t short of options. As far as wireless connectivity goes, you have Chromecast, Apple AirPlay 2 and Bluetooth 4.2 to choose from, as well as compatibility with the likes of Spotify Connect. The physical suite of connections extends to an Ethernet socket, 3.5mm analogue input and digital optical socket. This last item goes some way to giving the Crescent some credentials as a soundbar – but your TV will need to be on stilts if the Cleer is going to sit comfortably beneath it. 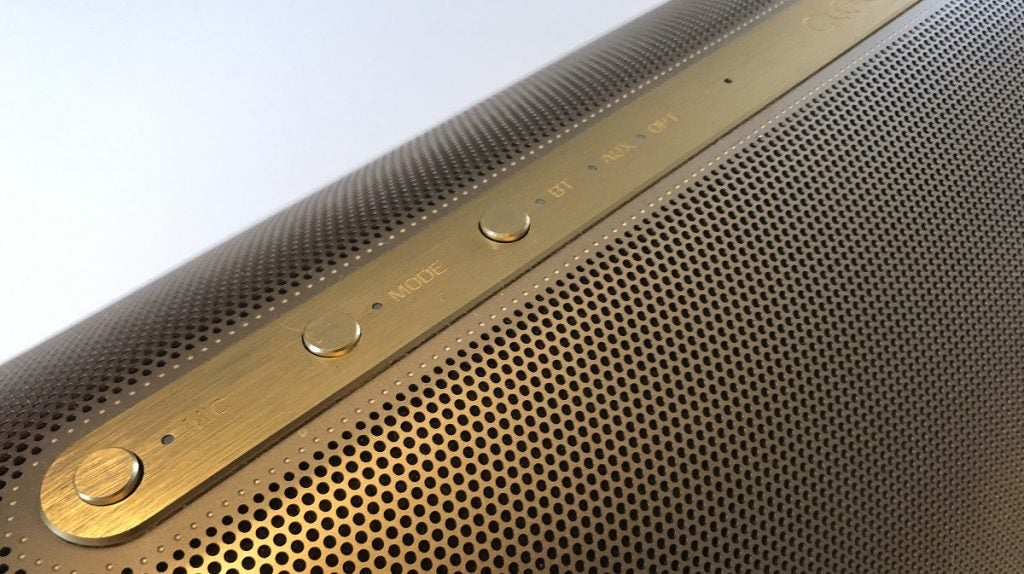 Along the top of the Crescent there’s a selection of physical controls. A ‘mic on/off’ button is always welcome, the Cleer’s compatibility with Google Assistant is very welcome, of course, but we don’t need Google listening to everything we say. Next to this is a ‘mode’ button with tell-tale LED – Cleer has incorporated a number of listening modes, and here’s where you cycle through them.

A blue light indicates ‘stereo widening mode’, a green light announces ‘room fill mode’ (which claims an “ultra-wide sweet spot”), and red means ‘3D mode’ (which basically wants to be Dolby Atmos without paying any licensing). You’ll notice that at no point is it possible to ask the Crescent to simply play a stereo signal without fiddling with it in some way. On the right-hand side there are ‘volume up’ and ‘volume down’ buttons, plus a combined ‘play/pause’ control. In between are a couple of openings to let the mics do their thing. 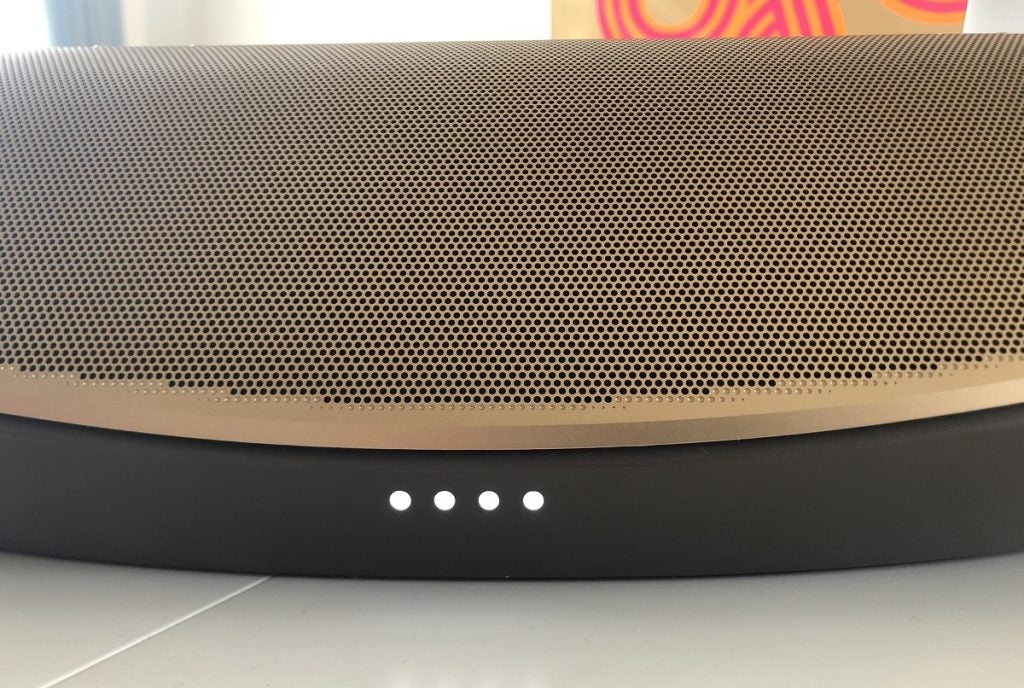 There’s no remote handset or control app accompanying the Crescent, but between the physical controls and Google Assistant (which proves as responsive here as it ever gets), it isn’t difficult or time-consuming to get the Cleer to do your bidding. There’s a four-strong strip of LEDs at the bottom/front of the cabinet to indicate that Google is paying attention.

It’s quite often possible to gauge how well a product has been designed and executed by listening to the same music (ideally the same digital file) through as many of its different inputs as possible. And it’s pleasing to report that the Cleer Crescent sounds remarkably consistent, no matter if you play the same piece of music via Bluetooth or AirPlay 2, via its 3.5mm input or simply by requesting it of Google Assistant.

No matter the method used to get a 16-bit/44.1kHz file of Grinderman’s Palaces of Montezuma on board, the Crescent broadly maintains the same sonic signature. Even when it’s played as a bog-standard Spotify stream via Google Assistant, the Cleer’s overall attitude doesn’t alter in any meaningful way.

Despite the ‘stereo widening’ mode’s intention to deliver a sound expanding beyond the physical limitations of the cabinet, the Crescent sounds decently focused when playing this way. There’s a suggestion of width to the presentation, certainly, but it isn’t as if you’d ever fail to identify the point-source of the music. 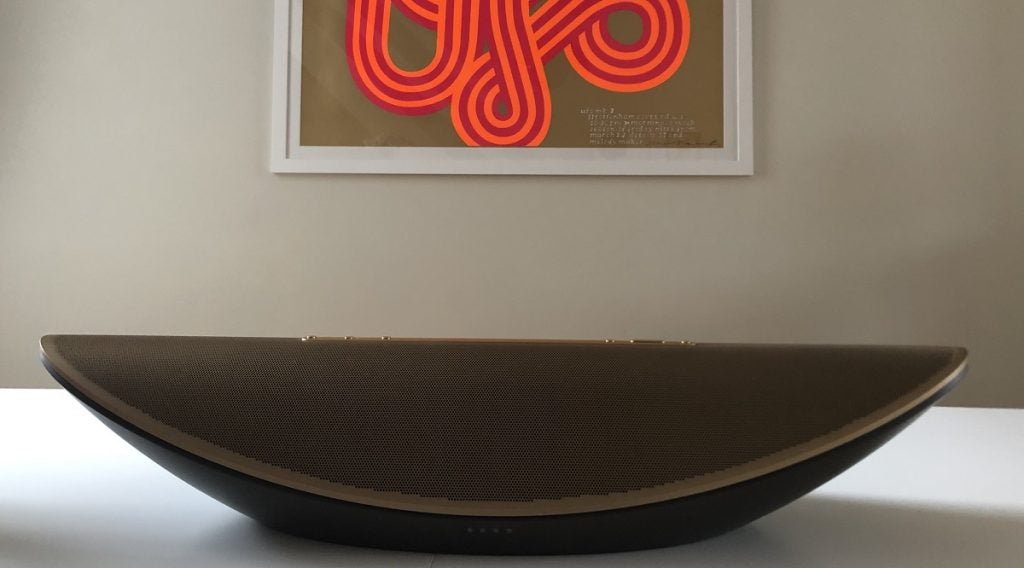 There’s good low-frequency presence and texture to the Cleer’s sound. It digs acceptably deep and punches reasonably hard, and there’s sufficient control to bass information that it doesn’t hamper the Crescent’s sense of momentum. The handover to the mid-range is smooth, and there’s more than enough detail revealed here for a singer to communicate eloquently.

The top of the frequency range is just a little more problematic. A 40mm full-range driver will always have a job on its hands to deliver treble sounds with the sort of bite and substance they require – and, sure enough, there’s just a hint of ragged flimsiness to the Crescent’s top-end. No doubt the fact that eight drivers are all doing this at once is exacerbating matters somewhat. Despite the slightly dislocated nature of the treble, though, the Cleer has a worthwhile sense of unity to its sound. And there’s quite impressive separation to complement the Crescent’s audio focus.

Switching to ‘room fill’ mode (a green LED, remember, and a mission statement to “create an ultra-wide sweet spot”) is a success of the qualified kind. The overall sound is more expansive, certainly, but it doesn’t really fill the room any more than ‘stereo widening’ mode does. What it does do, however, is shine a spotlight on the mid-range – it puts vocals front and centre of what remains a pretty well-defined soundstage. 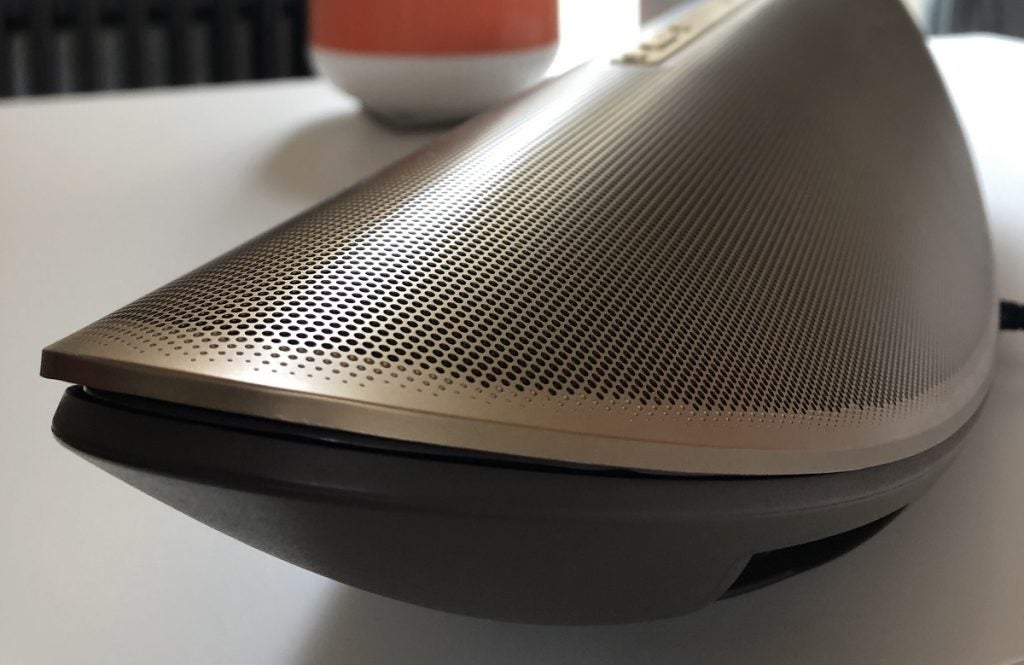 But, at the same time, it undermines the Crescent’s dynamic potency somewhat – it sounds like the effort to fill the room with sound hasn’t left the Cleer with sufficient energy to describe the ‘quiet/LOUD/quiet’ variations with as much positivity as before.

Still, if ‘room fill’ mode is only a partial success, that puts it well ahead of ‘3D’ mode. Yes, engaging the red LED brings a little extra height and width to the sound, but at the same time it makes everything sound hazier and less coherent than before. The straight edges of bass sounds become more vague, the unequivocal nature of the mid-range deserts it. Still, at least the top of the frequency range doesn’t get any more jagged than it already is.

If you can find the necessary space to use the Crescent as a soundbar, it will certainly offer you a bigger sound than most televisions can muster – but it won’t sound as focused. Safe to say, Dolby and DTS have little to fear from Cleer’s ‘3D’ presentation.

You should buy the Cleer Crescent if…

You should not buy the Cleer Crescent if…