Despite looking much the same, under the hood Mu-so Qb 2 has received plenty of (welcome) changes. A hike in price over the original is likely to be noteworthy for some. It’s a lot of money for a wireless speaker, even one as beautifully made, comprehensively specified and thoroughly enjoyable to listen to as this one.

Following in the footsteps of the Mu-so, the Mu-so Qb has received a refresh in the Mu-so Qb 2 – but this is more than just a quick tidy up – with all new driver units, the illuminated dial that graced the Mu-so 2 and AirPlay 2 functionality.

The Qb 2 finds itself competing in a market that’s been expanded and emboldened by the roaring success of its predecessor. The premium wireless speaker is not the rarity it was when the original Qb launched in 2016 – so does this discreetly fettled update have what it takes to go up against some of the best alternatives the original Qb inspired?

Did I say ‘discreetly’ fettled? That’s to understate the subtlety of the design changes Mu-so Qb 2 has undergone – if I didn’t know better I’d suggest it looks like no design work has been undertaken whatsoever.

As a consequence, Qb 2 is one of the more understated and attractive premium wireless speakers out there. Its three-sided grille features a few interesting protuberances, its Perspex plinth is jewel-like, and its heatsinks at the rear of the cabinet look as purposeful as the burnished aluminium of the top panel looks expensive. 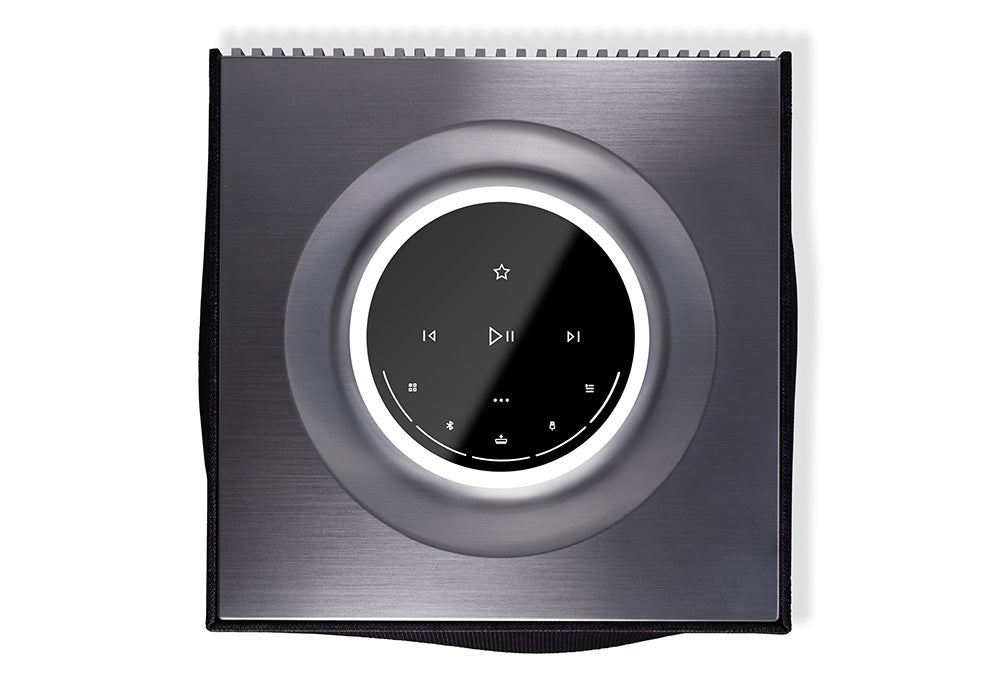 Plus, of course, it retains the single nicest physical control of any electrical item you can buy. The oversized control wheel on the top panel has been tricked out with an illuminated edge and a total of 15 touch-sensitive controls in its centre, but first and foremost it looks and feels great. No other product has such an enjoyable tactile control (except for the other Naim products that use this wheel of delight too).

It’s valid to question why Naim hasn’t chosen to reflect the hard work that’s gone on under the skin of Qb 2 in at least a mild upgrade of its aesthetic. But then it’s probably equally valid to suggest the original Qb was a handsome and decorative item, and if it ain’t broke why try to fix it?

Obviously the Mu-so Qb 2 has a few physical inputs – there’s a mains socket, Ethernet connection, digital optical input and 3.5mm analogue socket, all arranged beneath the heatsinks at the rear. But what’s much more important in a product of this type is getting music into it without wires.

In this respect the Naim is hard to argue with. It’s Roon-ready, and has Spotify Connect, Chromecast built-in, Apple AirPlay 2, UPnP, Tidal and Bluetooth (although ‘only’ 4.2). Internet radio is dealt with via vTuner. 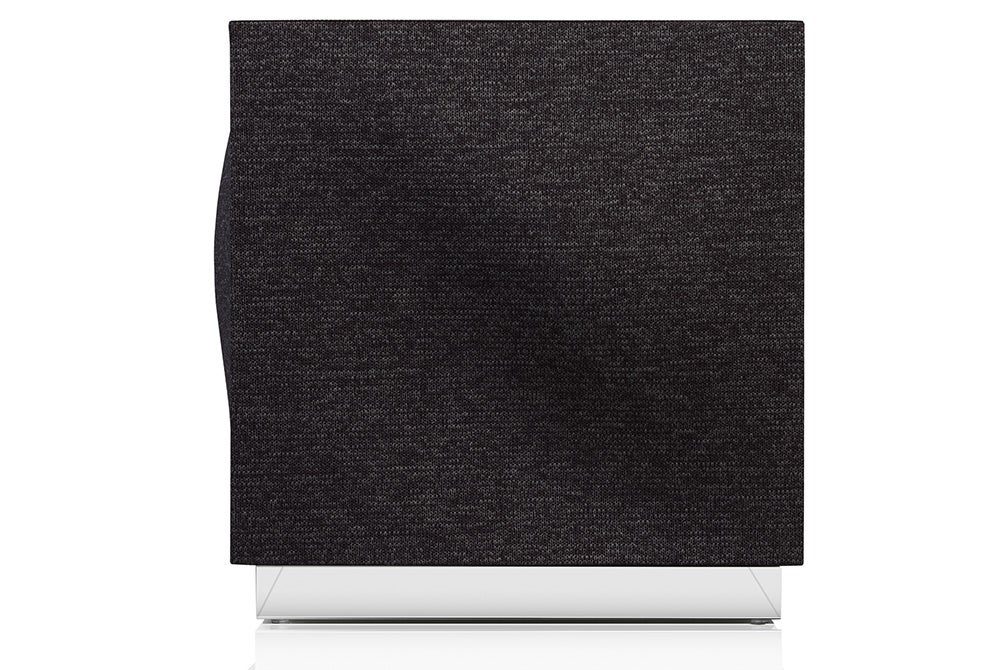 All the worthwhile file formats are supported – they include WAV, FLAC, AIFF and ALAC (up to 24bit/384kHz resolution), OGG, MP3, AAC and WMA (to 16bit/48kHz) and DSD (64 and 128). Bear in mind, though, that Qb 2 is either upscaling or downscaling virtually all the music you put into it – its direct digital amplification arrangement includes processing of digital audio files at a native 24bit/88.2kHz.

Some will argue that anything above 16bit/44.1kHz legitimately counts as ‘Hi-res’; others might suggest that anyone dropping £749 on a wireless speaker is entitled to expect a bigger and more impressive number than 24bit/88.2kHz.

Still, ‘300’ is a big, impressive number when it refers to the amount of Class D power inside this relatively small (218 x 212 x 210mm, so not strictly speaking a) cube. This power is divided between a five-strong driver array on the front panel: two angled tweeters get 50 watts each, two midrange drivers get 50 watts each too, and the final 100 watts power a ‘racetrack’ bass driver firing dead ahead. On each side panel covered by the grille there’s a large passive radiator offering low-end reinforcement.

(As regards the grille, it’s available as standard in the black/grey finish of these images – a selection of altogether more lively grille colours are available. They’re £50 each, which seems miserly – £749 really ought to buy my choice of grille colour.) 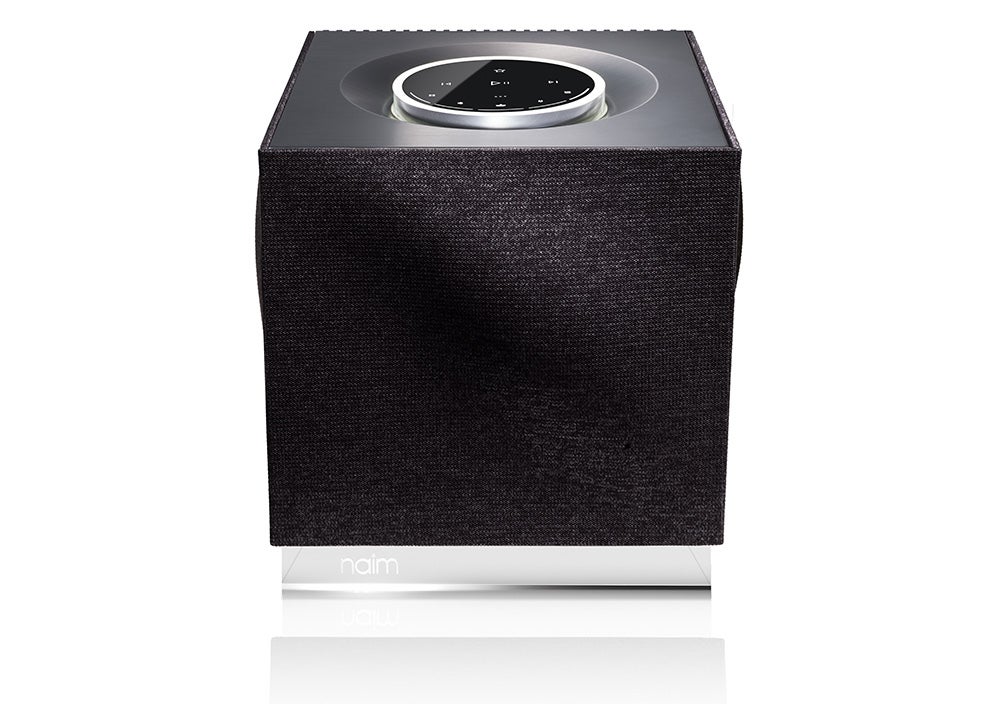 Using that control app isn’t perhaps as free from frustration as it might be, though. It’s been recently refreshed, and there’s no doubt it’s more stable than it used to be – but that’s not quite the same thing as being stable.

It’s not immune to crashing, and even though this is a fairly rare occurrence it’s still enough to sow the seeds of doubt every time you fire it up. It has a particularly fraught relationship with Tidal, which seems to be involved in every app glitch or malfunction. 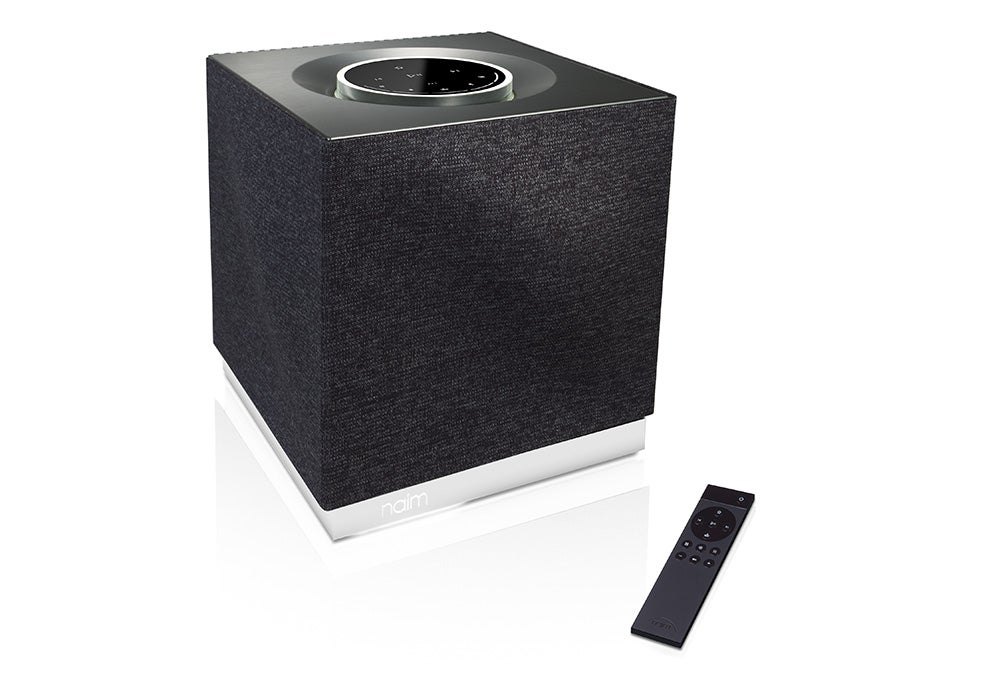 The remote control handset, on the other hand, is (naturally enough) completely reliable. It has all the major functions too, including the control for the level of illumination enjoyed by the control wheel and the logo set into the Perspex plinth. Its usefulness isn’t matched by its tactility, mind you – it feels a little matter-of-fact where Qb 2 itself is quite opulent.

In fact, the most satisfying way to interact with Qb 2 is via that luxurious control wheel. But this is a wireless speaker, built to be convenient (as well as to sound great) – and where’s the convenience in having to stand over it every time you want to give it an instruction?

There’s a tiny bit of set-up to be done: tell the app about where your Qb 2 is located (in free space; against a rear wall; in a corner) and you’re good to go.

It doesn’t take much listening for the Naim Mu-so Qb 2 to establish its credentials. That driver array (finessed with help from Naim’s sister company Focal), allied to the ample reserves of power, offers the sort of low-level authority and dynamic prowess that lesser speakers would kill for.

The soundstage is broad and well defined, stereo imaging is remarkable from a reasonably compact enclosure, and there’s exactly the sort of punch and attack available that the giddy power output figure promises. 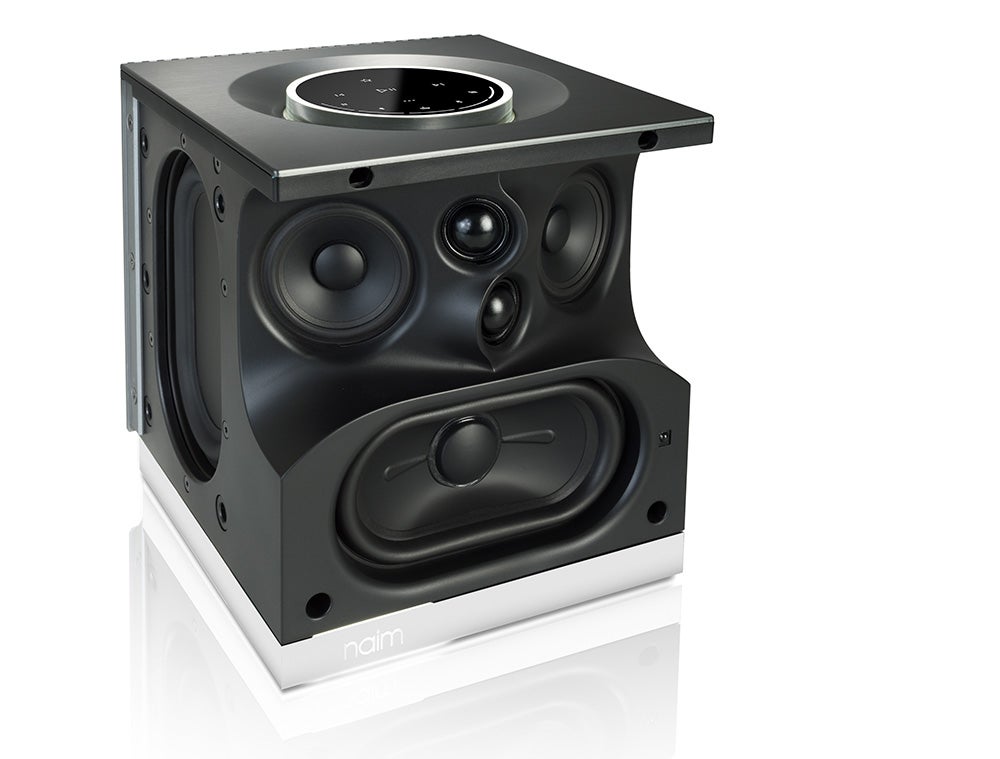 Nick Cave & The Bad Seeds’ Push The Sky Away album allows the Qb 2 to show off quite a few of those talents. Aside from the mildly unhinged crescendos of Jubilee Street and Higgs Boson Blues, this is – broadly speaking – a low-temperature recording that simmers rather than shouts. The Naim understands this stance entirely, giving the low-level harmonic dynamics and implicit threat of We No Who U R real expression.

The Qb 2 remains absolutely poised as the music orbits Cave’s close-mic’d vocal, loading his imprecations with detail and character. Mermaids sounds almost ready to collapse under the weight of its keening strings and brushed percussion, but the Naim keeps it on the straight and narrow with a gentle but insistent hand.

Switching to the more robust, but less subtle, challenge of So… How’s Your Girl? by Handsome Boy Modeling School lets the Qb 2 demonstrate its ability to dig deep into the low frequencies, and hit with strength and control as it does so. 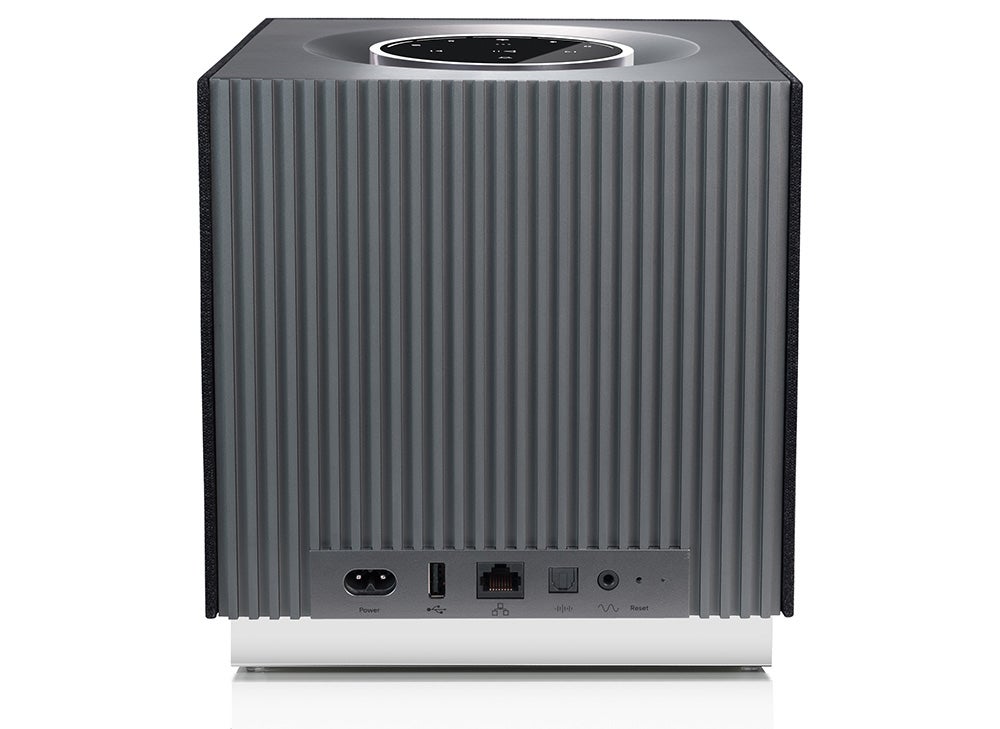 There’s real force and momentum to The Projects (P Jays) but it’s well controlled and never threatens to swamp the voices directly above it. Treble sounds attack crisply but never suggest they might get coarse, even at considerable volume (and the Naim is most certainly capable of considerable volume).

The overall tonal balance is cleverly judged, and the amount of detail the Qb 2 dredges out from even dense and murky mixes makes it sound open and, as a consequence, entirely accomplished.

It’s an impression that’s helped no end by the Naim’s facility with timing – for a small enclosure that’s pretty much filled with drivers, it manages to imbue Rock n’ Roll (Could Never Hip Hop Like This) with admirable unity and coherence.

Though it looks virtually identical to the original, take nothing away from Naim’s cuboid wonder. There aren’t many premium wireless speakers that ae as beautifully made, comprehensively specified and thoroughly enjoyable to listen to as this one.

There’s plenty of ways to wrangle a tune out of the Naim through wireless means. Whatever ecosystem you find yourself in – whether that be Apple or Google – the Qb 2 can slot right in. There are no voice assistants built-in, so you’ll need to look elsewhere for that.

The fact that Qb 2 is a good 15 percent more expensive than the outgoing Qb is noteworthy. Perhaps I’m more exercised than I should be by the idea of a coloured grille being a cost option, but nevertheless you’re looking at very close indeed to £800 for a Qb 2 that isn’t black. That’s a lot of money for a wireless speaker.

Perhaps its most obvious competition comes from Bowers & Wilkins’ Formation Wedge speaker. It looks like a berserk lampshade, true, and it doesn’t have anything like the design kudos of the Naim. But it sounds, if anything, even wider and better focused than the Naim and is capable of similarly startling volume levels. At £899, though, it’s an even more significant investment.