Not perfect by any means, but thrillingly individual

I used to think I could rely on Devialet. Ever since the launch of its first wireless speaker, 2015’s Phantom (which seemed quite mad at the time but has been made to seem pedestrian by subsequent, ever-more-mad variations), it seemed I could count on the brand for odd design statements, ludicrous power ratings and eye-watering price tags.

My confidence was rocked a little by 2017’s Soundbox, a collaboration with Sky TV that was quite good value – if you’re a Sky TV subscriber, at least. And now there’s the Phantom Reactor 900.

At a glance, it looks like another Phantom variant – and it is. But the Phantom Reactor is a tiddly 16 x 17 x 22cm – around the quarter of the size of a full-grown Phantom. This model has a mere 900 watts of power, which sounds like a lot, admittedly, because it is – but compares unfavourably with the Gold Phantom’s 4500 watts – and costs an almost-realistic £1290. More disturbingly, there’s also a Phantom Reactor 600, which doesn’t even cost a grand and packs a puny 600 watts.

Has Devialet decided there’s no point in manufacturing products for monied nutcases? Can it compete down towards the mainstream where the biggest brands lurk? If I can’t rely on Devialet, who can I rely on? Questions, questions.

Devialet Phantom Reactor 900 design – What else would you expect from Devialet?

So, yes, the Reactor 900 looks exactly like a Devialet Phantom that’s been through a boil-wash. That means an ovoid enclosure not dissimilar in proportion to an original Dyson vacuum cleaner, with heat-dispersing fins at one end and the company’s distinctive, and elaborate, die-cut speaker grille at the other.

On either side of the one-piece cabinet are covered low-frequency drivers, a piece of characteristic Devialet Phantom design that’s intended to both aid the spread of sound and add another level of visual theatre when the Reactor 900 is doing its thing, although it won’t have the same all-encompassing effect as multi-room speakers. 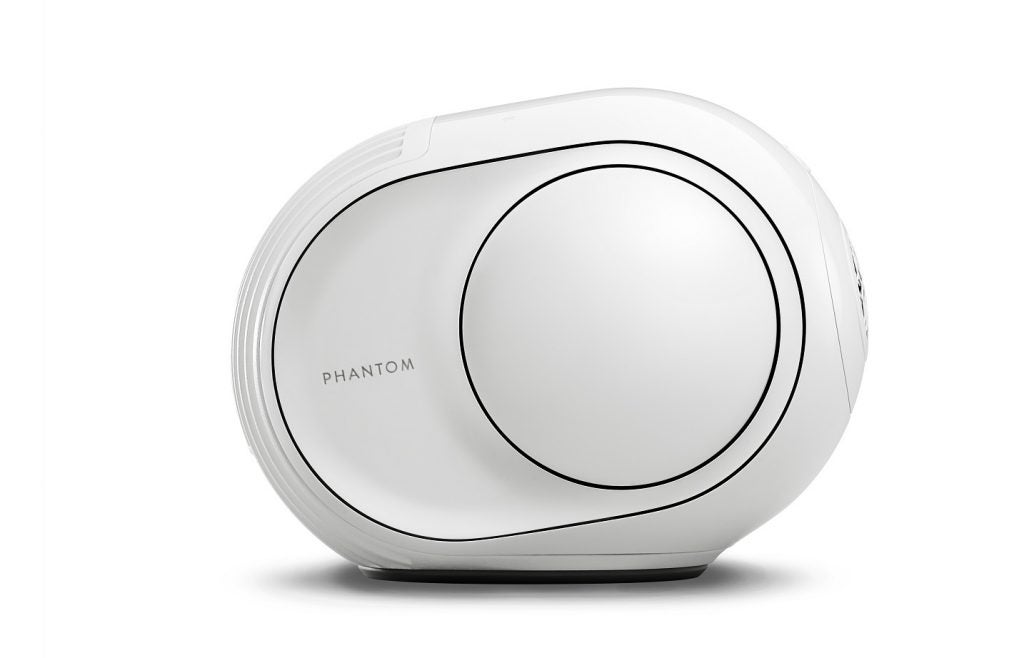 So the Phantom Reactor 900 does at least subscribe to the broad Devialet template of looking like nothing else except other products from the same brand. There’s something quite gratifying about gazing on a scaled-down device such as this, although it doesn’t look like you’re getting all that much hardware for your £1290, no matter how smoothly finished or shiny white it is.

Mind you, at 4.3kg it most certainly feels like your money’s-worth when you put it on a shelf.

Across the back of the Reactor 900 are five touch-sensitive controls: play/pause, volume up, volume down, Bluetooth pairing and a “link” button for use with the Devialet control app when initially setting up the speaker.

Around the back, beneath the heatsink, sit the physical inputs: mains power, a switchable digital optical/analogue 3.5mm input, an Ethernet socket and a standby/reset button. That’s it for the outside.

On the inside, however, the Reactor 900 has a lot going on with some big numbers attached. The side-firing bass drivers (each a 10cm aluminium cone) are arranged in a push/push configuration and are hermetically sealed under a mighty 200kg of pressure. Devialet calls this arrangement Heart Bass Implosion, which sounds dramatic but doesn’t really mean anything. 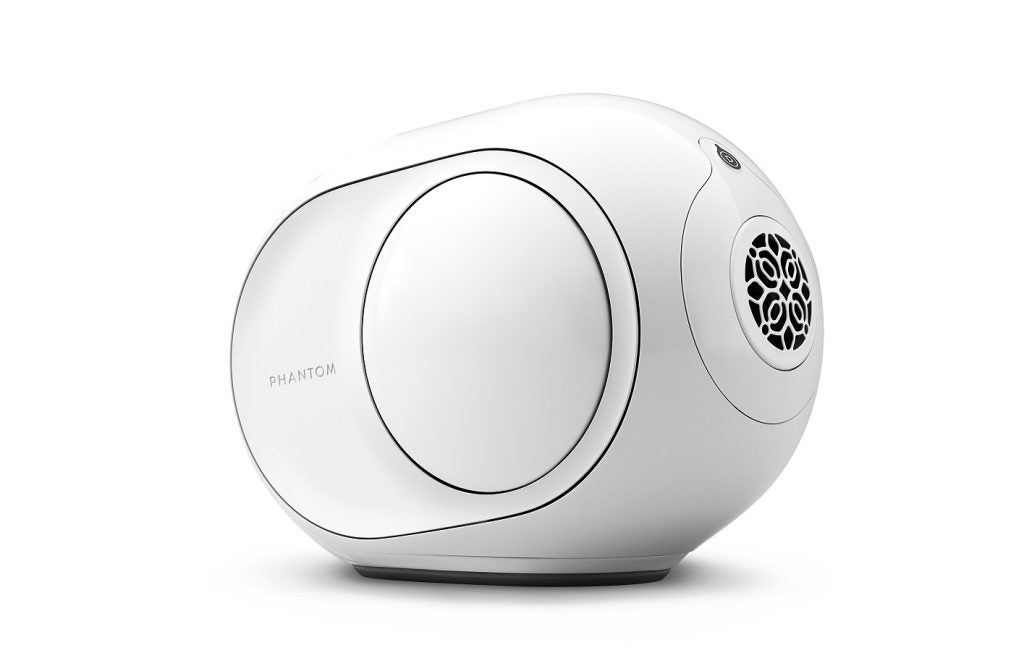 The bass drivers, and the 3cm aluminium mid/treble driver up-front, are amplified by Devialet’s ADH circuitry – it’s a hybrid of class A (best sound) and class D (most efficient) amplification, with a 24bit/192kHz DAC embedded within it. So if you’re using Ethernet or digital optical as a source, hi-res audio is firmly on the menu.

Never knowingly understated, Devialet has managed to call its sound distribution algorithm ACE (Active Cospherical Engine) and its signal processing SAM (Speaker Active Matching). The Phantom Reactor 900 isn’t just a vehicle for some racy-sounding abbreviations, though – there are 160 patents attached to this wireless speaker, which go some way to demonstrating just how serious Devialet is.

You can, of course, operate the Reactor 900 using the physical controls, but no-one ever bought a wireless speaker in order to keep getting up and prodding at it. Much easier to use the Devialet Control app (free on iOS and Android), which is by far the least idiosyncratic aspect of the product.

Devialet may get hot under the collar when it comes to design, but it isn’t so daft that it messes with the usability of a control app. Clean and logical, the Devialet Control app is stable and useful – which is how I like them, just like everybody else does.

It may be understated by Devialet’s standards, in terms of price and size and power, but the Phantom Reactor 900 sounds like a chip off the old block. While it’s no blunt instrument, its priorities are clear: it came to get down, and to jump around.

The bass response, from a speaker of this size, is truly remarkable. It digs uncannily deep, it hits tremendously hard, and it loads low-frequency sounds with stacks of detail about texture and timbre.

No matter if it’s the processed beats of Burn With Me by DJ Koze, the grubby electric bass guitar of The Stranglers’ Walk On By, or the woodily organic sound of the upright double bass in The Shoes Of The Fisherman’s Wife Are Some Jive Ass Slippers by Charles Mingus, the Reactor 900 leaves you in no doubt.

Any low-end information is served up with presence, speed, dynamism and absolute control. It’s a level of bass fidelity you won’t find in any other wireless speaker at this, or anything close to this price. 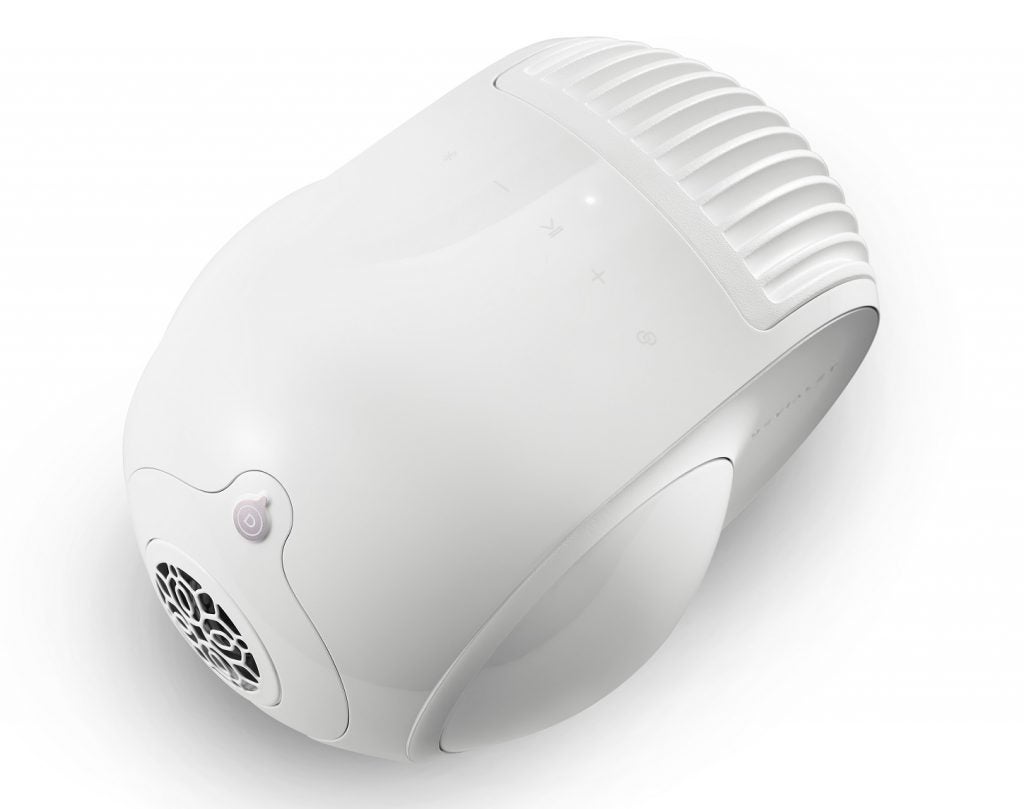 The lavish bass response is accompanied by a startling flurry of movement from the side-firing woofers. In most speakers, this alarming driver excursion is “a bad thing” – but this is not most speakers. Like its Phantom siblings, the Reactor 900 is a visual experience almost as much as it is an audio experience. You’ll soon get used to the way it joins in with the sound it’s making, but I doubt you’ll ever stop finding it enjoyable.

Up above all this excitement, the 900 proves to have a  smoothly communicative mid-range. It grants a singer full expression, making Nina Simone’s performance of Isn’t It A Pity as intimate and visceral a performance as can be. The more you challenge it, with singers as accomplished as Stevie Wonder or as approximate as Orlando Weeks, the more it makes their character and technique obvious.

And while it’s by no means as assertive at the top of the frequency range as it is at the bottom, the Devialet still has sufficient treble presence and attack to make the shining percussion of The 1975’s A Brief Enquiry Into Online Relationships as much a feature of the recording as the turbulent activity beneath.

Integration throughout the frequency range is good, the ACE processing means the Reactor 900 spreads sounds evenly around its cabinet and, thanks to the 900 of shove on tap, it’s capable of indecent volume levels. Timing is decent, too – with the sense of unity in the Nina Simone recording, in particular, coming across strongly.

What the Phantom Reactor 900 can’t do with any certainty is give a recording any breathing space. For all that it distributes sound far and wide, the soundstage it describes is cramped and confined. Even something as spare as the small-ensemble Nina Simone recording sounds congested, with bass, drums, piano and voice all scrapping for elbow room.

Switch back to The Stranglers and the overall impression is not so much of a horizontal stage as a vertical punch-up. This sensation of compression, allied to the 900’s prodigious bass activity, results in a sound that’s even more overpowering than I imagine Devialet intended.

Why buy the Devialet Phantom Reactor 900?

There are plenty of reasons to consider the Phantom Reactor 900 – and they’re all, to a lesser or greater extent, to do with showing off.

There’s certainly no arguing with the sheer scale of the Devialet’s performance. The most likely direct rival (as much as any other manufacturer could be said to rival Devialet when it comes to this sort of thing), Naim’s £900 Mu-so, doesn’t have anything like the visual drama.

It’s a luxurious and tactile item, certainly, with deeply impressive sound quality, but it doesn’t have the visual or audio potency of the Reactor 900. If you want your premium wireless speaker to be a talking point for anything other than the sound it makes, then the Reactor 900 is your only choice.

But for all that it’s made to look a bit pedestrian by the Devialet, the Naim has better-balanced sound – even if, at 450 watts, it doesn’t have quite the tinnitus potential of the 900. It’s more affordable, and arguably the more grown-up proposition.

But, as a famous man once said, “those who like this sort of thing will find this the sort of thing they like”. There’s nothing at all like the Devialet Phantom Reactor 900 – and while this isn’t entirely a positive thing, it’s nevertheless going to find it some fans.