Available on Xbox One, PS4 (version tested), PC
While so many other remasters feel like exercises in nostalgia or an excuse to squeeze some more dough from an old warhorse, Bulletstorm deserves this second chance. Developed by Epic Games and People Can Fly, it was released in 2011 to the general bewilderment of a public wanting more Battlefield and Call of Duty. With EA’s marketing muscle behind it, it was never going to flop, but it never reached the mass audience that could have taken it to heart.

Sure, on the surface Bulletstorm looks dumb, like an FPS designed by Gears of War fans who were concerned that their favourite series was growing too intellectual. Its attitude to violence and women could be seen as problematic, while there’s something deeply adolescent about its musclebound heroes, space fantasy locations, dodgy gags and appetite for gore. Yet Bulletstorm is actually a smarter shooter than it at first appears; a precursor to last year’s awesome Doom reboot in many ways.

True, your protagonist, Grayson Hunt, seems like another one of Epic’s meat-head space marines, while the plot – escape a savage planet and take revenge on his corrupt commander – is hardly cliché-free. Yet Bulletstorm rarely takes itself too seriously and openly revels in its mindlessness. It knows its genre, its audience, and how to get the most from both. 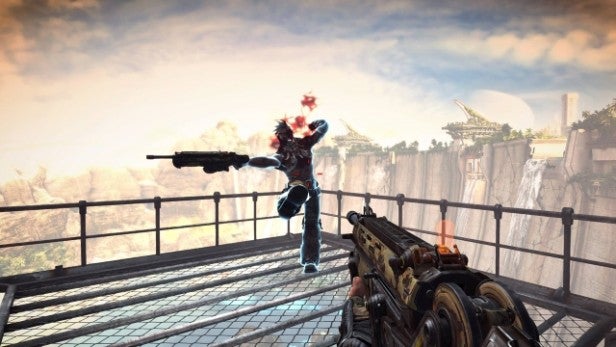 Its secret weapons are the boot and the ‘instinct leash’, the latter discovered within the opening section of the game. Bulletstorm is a game where enemies come at you thick and fast, and where ammo is in scarce enough supply that killing all of them at a distance isn’t an option. Instead you learn to kick onrushing foes before they reach you, sending them flying for a second of slow-mo into the air. This gives you ample opportunity to shoot them in the kisser.

The leash, meanwhile, is one handy high-tech whip. You can use it to grab certain objects or explosive barrels, but also grab foes – even when they’re lurking behind cover – and drag them flying through the air towards you. And if you happen to lash out with your foot as they near? Well, that hurls them back the other way. Why not shoot them to make sure they don’t come back?

Together the foot and leash make a cool core mechanic, but what makes Bulletstorm brilliant is the concept of the skillshot. Kill one or more enemies in a creative, stylish fashion and you’ll rack up points that can be spent on ammo and upgrades. Some skillshots can be pulled off anywhere, just by combining the leash and the boot with gunplay and taking a cheap headshot, or anywhere-else-shot (you can probably guess what the Rear Entry skillshot means).

Related: Middle Earth: Shadow of War – Everything we know 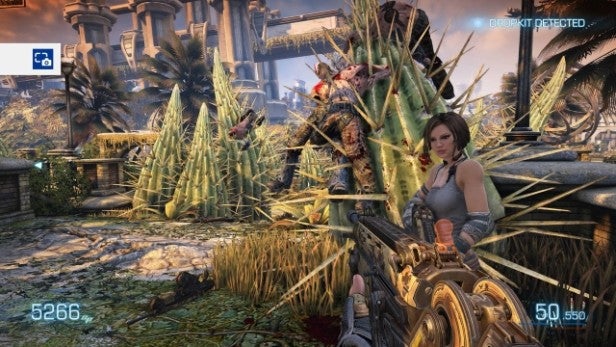 The more spectacular your ultra-violence, the better equipped you become to pull off more. I’m not really sure what message Bulletstorm is sending, but it definitely makes for a gruesomely entertaining FPS. Weirdly, it’s so cartoon in its violence that it doesn’t even feel as sadistic as some of Call of Duty’s most brutal episodes.

Your two mainstays are backed up by an impressive array of other weapons, each seemingly designed for maximum bloodshed and mindless destruction, each bearing a charged secondary fire mode. We’ll all have our favourites, from the grenade launcher with its bouncing bombs to the sniper file with steerable bullets and that spectacular gun that shoots missiles that bore their way through your target. Together they make for one of most entertaining arsenals in a shooter this side of Insomniac’s Resistance games or Doom.

The enemies you face are very much tuned for the kind of game Bulletstorm is. You get a few who hang around behind cover, begging to be leashed, but a large number will charge relentlessly towards you; others wander around bearing heavy weapons, or sneak about taking pot-shots with their whiz-bang, firework-blasting guns.

And while normally heavily armed and armoured foes are one of my FPS pet hates, Bulletstorm makes these encounters challenging and enjoyable, giving each one a weakness to be exploited and the chance to rip their armour from them with the leash. It feels good when these bullies finally go down. 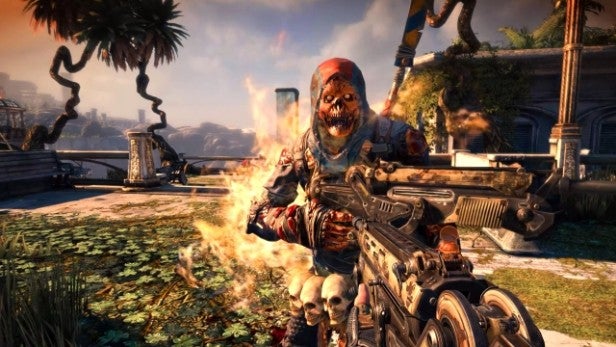 Now, nobody wants to go back to the days when all shooters were such linear, heavily orchestrated efforts, but playing Bulletstorm reminds you why these games still work. It’s a theme-park ride full of tough and fun encounters, punctuated with spectacular set-pieces and even the odd boss battle.

It isn’t hard to see the rigging or the way these run on rails, but racing through the desert on a railway pursued by a gargantuan spiked wheel is pretty cool. The same goes for – of all things – a turret sequence where you tackle hordes of goons, their mini-copters and a Godzilla-sized monster to boot.

There are even some more inventive sequences, including one that gives you the remote for a radio-controlled monster with laser-beam eyes and a nice line in clawing and smashing. It’s one thing to make the action so breathless, but Bulletstorm has some imagination too.

There are some tricks it’s missing. Grayson isn’t the most acrobatic hero and his inability to jump or vault over all but a few, clearly marked barriers soon becomes wearing. Clicking down the left-stick to duck behind cover isn’t intuitive, and we’d love to see a sequel combining Bulletstorm’s attitude and killshots with the kind of movement we’re seeing in Titanfall 2, Call of Duty: Black Ops III or Destiny.

The Full Clip edition includes Bulletstorm’s Anarchy and Echoes modes, complete with all the post-launch DLC. The former is the main multi-player component and your classic wave-battling horde mode. We’ve had precious little chance to try it before launch, but on the Xbox 360 it was slick and a lot of fun.

Echoes mode is more a timed, score attack mode, re-staging bite-sized chunks of the campaign as single-player challenges with a final killscore you can post to the leaderboard and compare with friends. It’s an addictive, enjoyable little arcade FPS mode and a smart way to expand the single-player lifespan once the campaign is done. 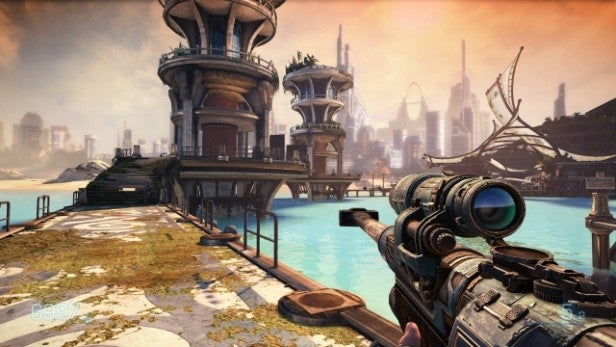 This is a six-year-old game and very much of its time, and it isn’t hard to see its vintage in the scenery and character design. However, Bulletstorm was one of the best-looking shooters of 2011, its vibrant alien planet setting always looked fantastic and the remastering team at Gearbox has done a fabulous job of upscaling textures and enhancing the effects and lighting.

The end result is a game that doesn’t look at all shabby by modern standards; not quite up there with The Coalition’s sterling work on Gears of War: Ultimate Edition, but really not far off.

Having said that, there’s one enhancement we could have done without. The Duke Nukem Bulletstorm World Tour pre-order bonus shoehorns the Duke into Bulletstorm’s storyline, complete with (slightly) revised cut-scenes and voicework from the iconic Jon St. John. Sadly, it’s pretty woeful stuff: badly written and unfunny, and stretched to the limits when it comes to working with the existing material.

It actually manages something miraculous: it leaves you feeling even worse about 3D Realms’ classic hero than you did already. Do yourself a favour and keep the option turned off.

Verdict
While it isn’t quite the neglected classic some claim, Bulletstorm was always a fantastic, hugely entertaining FPS. Nothing about that has changed: this remaster does a good job of bringing the visuals more up to date, and if you’re an FPS lover and haven’t played it, you really should.