What is the BT Smart Hub?

Internet service provider (ISP) routers aren’t known for being speed demons. The latest routers from the likes of PlusNet and TalkTalk have very basic specs that offer at best reliable, albeit relatively slow connections speeds. It’s no surprise, really, since budget broadband companies aren’t going to throw a £100 router at their customers on super-cheap tariffs.

BT, though, which offers hugely expensive tariffs with blisteringly fast speeds, has no such excuse. If it’s going to sell expensive broadband, it needs a router to match. Enter the Smart Hub.

It builds on the company’s previous Home Hub 5, and offers buyers a fuss-free setup process alongside the current-generation AC-wireless standard. The combined package works to great effect and makes the Smart Hub the best ISP router TrustedReviews has tested.

Vote for this product in the TrustedReviews Awards 2016 – win a £2,000 arcade machine

The BT Smart Hub is an unassuming router that builds on the Smart Hub 5’s design. The unit has a minimalist two-tone black front, with the only obvious design features being a BT logo and single glowing light at its centre. The light is colour-coded to let you know the status of your Wi-Fi connection.

The Smart Hub is slightly taller and wider than the Home Hub 5, but it contains massively improved hardware. It has seven antennas, which BT claims will let it offer significantly improved connection distances over the Home Hub 5, which had a 2 x 2 dual antenna setup.

The Smart Hub also has a USB 3.0 port on its rear. This is a marked step up on the USB 2.0 port seen on the Home Hub 5 and offers radically improved data speeds.

Round the back you’ll also find the usual assortment of four Gigabit Ethernet ports and a RJ-11 socket for broadband. For BT Infinity customers, the Smart Hub supports VSDL.

The rear of the unit also includes the same removable clip showing the hub’s name, Wi-Fi and admin passwords, which are randomised as you’d expect. 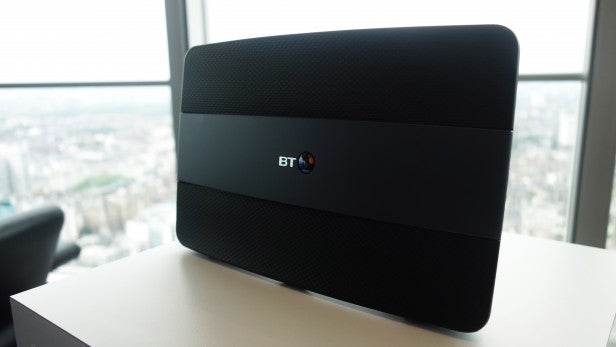 Since this is a bespoke design for BT customers, the Smart Hub is a doddle to set up. Out of the box, you simply need to connect the router to the mains, attach the broadband cable to the correct socket and wait for the Smart Hub to connect BT’s servers and automatically configure itself. The process takes around five minutes and is complete when the router’s front light glows blue.

BT is marketing the Smart Hub as being the ultimate no-hassle router. Specifically, the firm claims that the router’s Smart Scan feature means the Hub should automatically optimise itself to offer its user the best Wi-Fi signal and performance. This is standard among most routers these days, but should keep the Smart Hub from choosing wireless channels that are already congested. 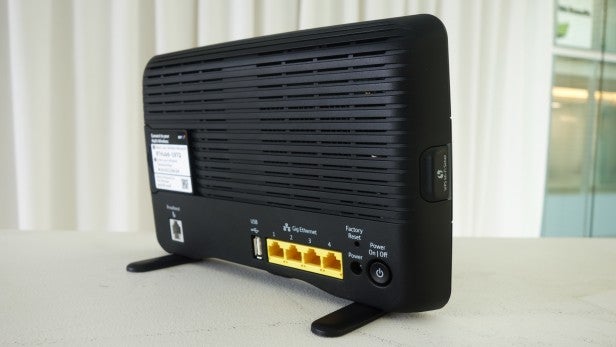 If you want to manually adjust the Hub’s settings via its web interface, you can type “http://bthomehub.home” into any web browser and log into your BT account. The interface has basic options, such as seeing which devices are currently connected to the Hub and a basic breakdown of current connection speeds.

Advanced settings let users manually turn off the Hub’s automatic scan features and choose which specific band or frequency they want the hub to transmit. Going into this amount of depth will be unnecessary for most. In general, I found that the Hub performed perfectly well in its out-of-the-box settings. 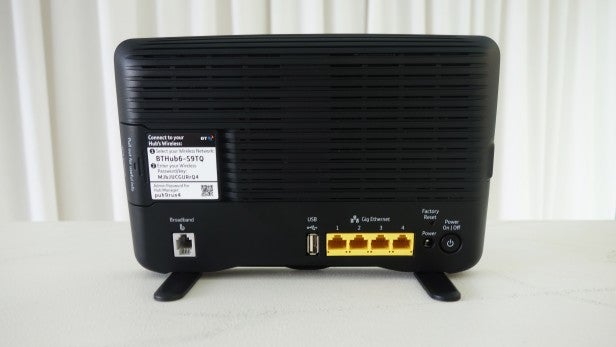 BT brought AC wireless connectivity to its customers in the Hub 5, and it’s present again here. For non-techies this is a big deal, since the AC standard is a marked step up on the previous-generation N standard.

Related: What’s the difference between N and AC Wi-Fi?

On paper AC routers should be able to deliver up to three times faster performance. The only downside is that the router requires a device with an AC-compatible card to take advantage of the tech – which is why the Smart Hub also broadcasts using the N standard for older devices.

The Smart Hub features an upgraded version of 802.11ac called Wave 2. It’s currently all the rage with tech companies and is traditionally only seen on more expensive routers from specialists such as Asus, Linksys, D-Link and Netgear. Wave 2 allows routers to broadcast on more parts of the wireless spectrum, making for more reliable and faster connections with multiple devices.

During my tests (reviewed using the D-Link AC1900 Wi-Fi USB Adapter) I found the upgrade works a treat and the Smart Hub easily outperformed the Home Hub 5.

At one meter, with the router unobstructed and locked to the 5GHz AC frequency, I measured a consistent 44% speed improvement over the Home Hub 5. 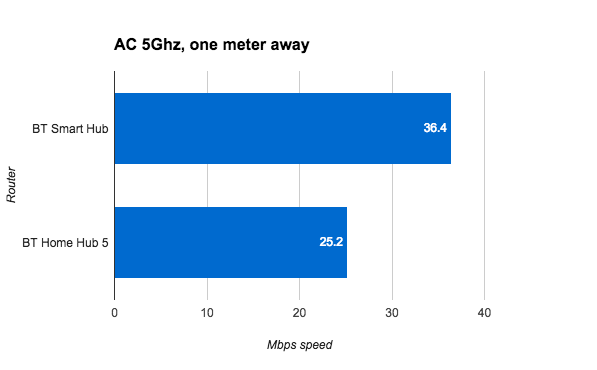 At five meters, with one wall obstructing me from my router, I measured a more impressive 54% speed boost over the Home Hub 5. 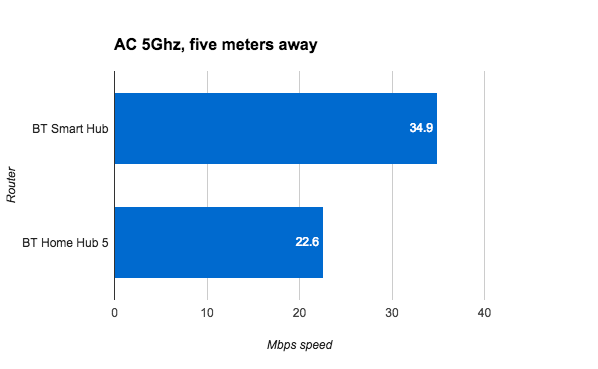 10 meters away, with two walls between me and the router, the Smart Hub offered a startling 59% connection speed improvement on the Home Hub 5. 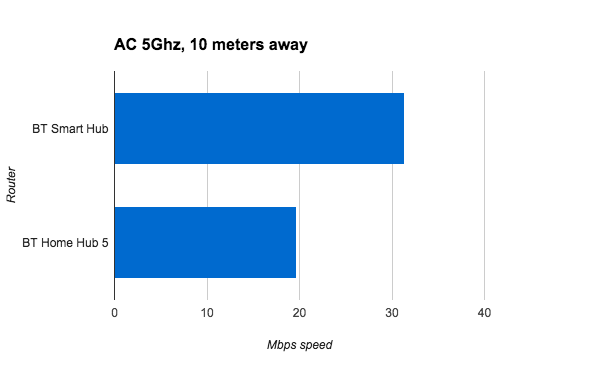 Testing speeds at 20 meters on my balcony with four walls between me and the router, neither router was outstanding, but the Smart Hub remained 50% faster than the Home Hub 5. 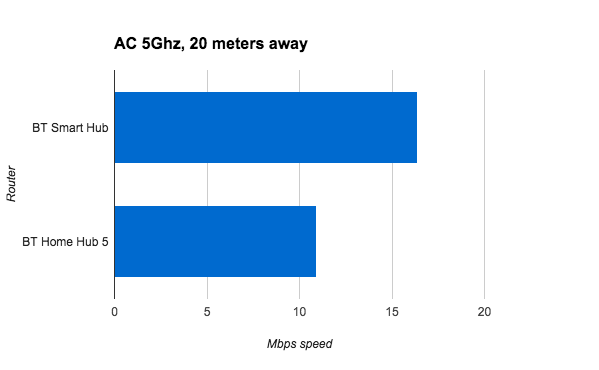 I do have one big beef with BT’s marketing, though. The company claims the Smart Hub’s seven antenna setup will let it push signal as far as 500 meters unobstructed and up to 350 meters through one wall. Living in London I couldn’t find a large enough location to test either figure, but if my experience using it in my flat is anything to go by, neither is accurate. During my time testing the Hub I always lost signal the moment I reached my building’s stairwell, which is a paltry thirty meters away and only blocked by two thin walls. This isn’t unexpected, but I can’t think why BT chose to make such big claims about the router’s range.

The Smart Hub also deals with multiple devices connecting to it better than the Home Hub 5, which is surprising given that the router doesn’t currently have Multi-user Multiple Input Multiple Output (MU-MIMO).

MU-MIMO is a cool bit of wireless tech seen on most high-end AC routers. It’s development on basic MIMO tech that helps a router better cope with multiple devices connecting to it at the same time – if the connecting hardware supports it, that is, which many older devices don’t. BT has pledged to add the functionality to the Smart Hub at a later date via an over-the-air update.

With three laptops, three phones, two tablets, a games console and a gaming rig attached to the router, I’m yet to see any serious outages or drops in connection speed. By comparison, the Home Hub 5 hung up at least once a month facing the same workload. 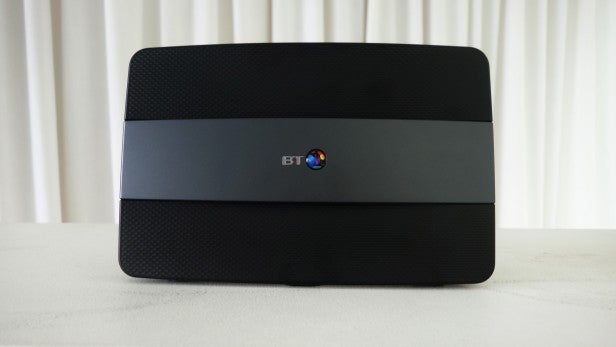 Should I buy the BT Smart Hub?

If you’re already with BT then, yes, absolutely. The Smart Hub is a huge step up compared to the Home Hub 5 and consistently offers a 50% performance boost and above. With BT currently offering it to existing customers for £50 – a £70 cut on its usual price – it’s also great value for money.

If you’re a power user looking for something a little speeder and feature rich then you’d still be better off checking out a third-party AC router, such as the TP-Link Archer C9 AC1900.