The Archer C9 is among the cheapest AC1900 known-brand routers you can buy, undercutting the likes of the Netgear R7000 by some £30 or so. Yet it wants for little when it comes to other extra features, such as USB support for sharing hard drives and printers and four gigabit Ethernet ports.

Unlike the rather aggressive, angular styling that D-Link and Netgear have opted for on their high-end routers, TP-Link has kept things modest with the Archer C9.

Its front is a smooth, curvy, glossy expanse of white with an elegant silver-painted stand propping it up from behind and three matte white aerials sticking out its top. If you’re an Apple hardware fan then it’s the clear choice for you. 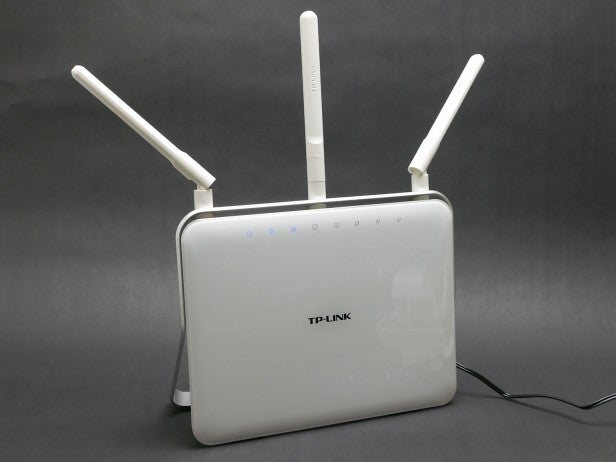 Elegant it may be but it’s not necessarily the most practical. The stand means you can’t lay the router flat or mount it on a wall. Moreover it isn’t sure footed enough and will fairly easily tip over. For most households these will all prove to be fairly minor points as once installed you’ll leave the router well alone, but its tendency to topple over definitely proved a little frustrating during testing.

Otherwise it’s a clean bill of health as the three aerials are removable, yet sturdy, and are easy to position. The lights on the front for indicating power, Wi-Fi connection, Internet connection and the like are all easy to see and tell apart – unlike the uniform rectangular lights of the Netgear R7500.

Round the back the selection of connections is nothing special but ticks all the crucial boxes, and again they’re clearly labelled. From left to right we’ve got the USB 2.0 port, WPS and reset button, the Ethernet socket that goes to your modem, four more gigabit Ethernet ports for the rest of your network and the power socket and switch.

On the side is a second USB port, and this time it’s USB 3.0 – ideal for sharing files on your network from a USB drive – while the one on the rear is only USB 2.0, but it’ll do for sharing printers.

The main event with this router is of course its AC1900 Wi-Fi capability. That amounts to up to 600Mbit/s transfers over 2.4GHz and 1,300Mbit/s over 5GHz. 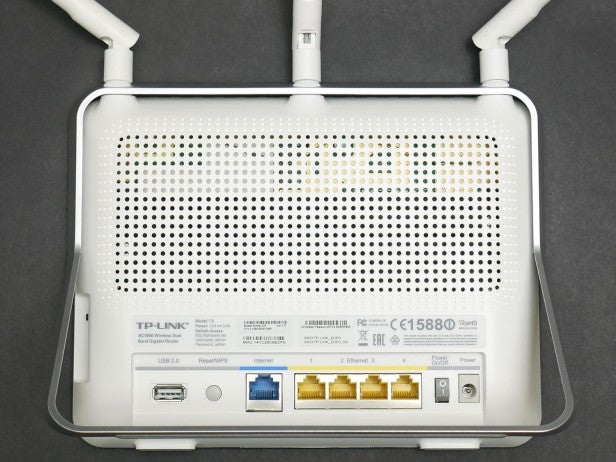 As ever you’ll only achieve the latter if you have compatible triple-antennae hardware, which is still pretty rare. Most laptops and phones don’t have it – most stop at dual-aerial arrangements – which only really leaves the option of a few PC cards or having a router-to-router setup where the speed of the AC1900 connection is used to span the gap between two remote buildings, for instance.

All that said, the triple aerial setup makes for potentially better beam forming and multi-device throughput rates, so there are still benefits for users of non-AC1900 products.

As I’ve come to expect of modern day routers, setup is easy. Once everything is plugged in – remember this is a router only, not a modem router so you’ll need a separate modem – just browse to http://tplinkwifi.net and the router should show up automatically and it’s then a simple case of setting your admin password and wifi name/password. 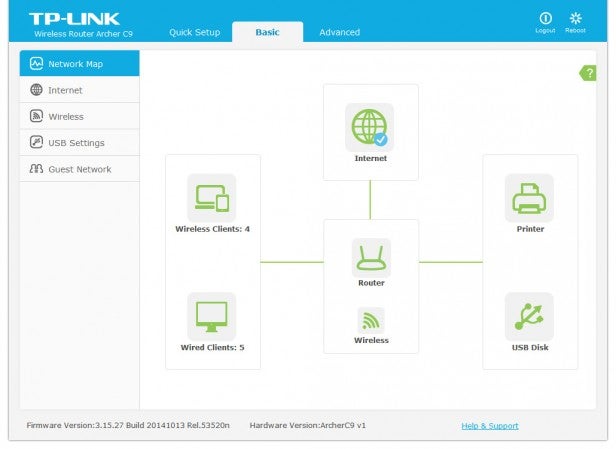 Outside the basic setup dialogue the interface is also a joy to use. The network map layout of icons in the basic view is really useful and the selection of options on the left is pretty much ideal. Jump into the advanced menu and the layout again makes it really clear as to what will be where and everything is cleanly and logically presented.

TP-Link doesn’t make an app for your PC akin to Netgear Genie. Instead, the only software you should ever need to install is the USB printing tool (there are both Mac and PC versions), which you only need run when printing.

This is an approach I’m generally a fan of as it means there’s no extraneous software running in the background. Instead, if you do want a quick and easy way to administer your router without logging into the web interface you can download an app for your phone (Android or iOS).