What’s the difference between 802.11ac and 802.11n? We explain the ins and outs of new-gen and last-gen Wi-Fi standards

b, g, n, ac… wireless standards haven’t had the most logical of alphabetical progressions, but it has just had the most important.

Last week governing body the Wi-Fi Alliance certified the ‘802.11ac’ standard, paving the way for the mass roll-out of ‘wireless ac’ devices. As this standard is built into routers, laptops, tablets, smartphones, televisions and much more we look at what enhancements it will bring over its predecessor, 802.11n, and whether it is worth getting excited about.

802.11ac Speed
With any new wireless technology speed is always the headline-grabbing feature but, as with every wireless standard to date, the figures tossed around can be highly misleading. 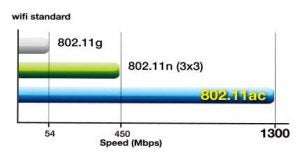 So wireless ac is roughly 3x as fast as wireless n? No.

These figures are ‘theoretical maximums’ that are never close to being realised in real world scenarios. In our experience wireless n performance tends to top off around 50-150Mbit and our reviews of draft 802.11ac routers have typically found performance to be closer to 250-300Mbit. So 2.5x faster when close to your router is a good rule of thumb (though far more at distance, which we’ll come to shortly).

Happily this gain is likely to increase as 802.11ac devices advance. Wireless 802.11n supports a maximum of four antennas at roughly 100Mbit each, where 802.11ac can support up to eight antennas at over 400Mbit each.

Smaller devices like smartphones tend to fit only a single antenna, but it gets even bigger in tablets (typically two to four antennas) and laptops and televisions (four to eight). In addition no 802.11ac router released so far has packed more than six antennas.

The first point to make is the 802.11ac standard lives entirely in the 5GHz spectrum. While some more modern routers broadcast 802.11n in 5GHz as well as 2.4GHz they remain relatively rare.

Consequently, the 5GHz spectrum tends to be ‘quiet’, meaning much less interference from neighbourhood Wi-Fi. This more than counters the fact that, in lab conditions, 5GHz signals do not actually broadcast as far as 2.4GHz signals. 5GHz is also necessary to support the faster speeds of wireless ac. 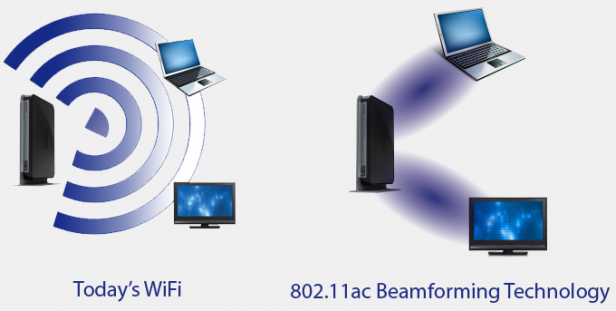 The second key factor is 802.11ac makes ‘beamforming’ a core part of its spec. Rather than throw out wireless signal equally in all directions, WiFi with beamforming detects where devices are and intensifies the signal in their direction(s).

This technology has been around in proprietary form (it made a huge impact in the D-Link DIR-645), but now it will be inside every 802.11ac router and every 802.11ac device.

The combination of these two technologies is profound. This was most clearly seen with the Linksys EA6500 which hit speeds of 30.2MBps (241.6Mbit) when connecting to a device just two metres away, but still performed at 22.7MBps (181.6Mbit) when 13 metres away with two solid walls in the way. By contrast Linksys’ own EA4500 (identical except being limited to 802.11n) managed 10.6MBps (84.8Mbit) dropping to 2.31MBps (18.48Mbit) under the same conditions.

The real world result is 802.11ac not only enables you to enjoy the fastest 100Mbit (and beyond) fibre optic broadband speeds all over the house, but to enjoy it along with multiple streams of Full HD content, super low latency gaming and blazing fast home networking all at the same time.

802.11ac Availability
Here comes the first caveat. The announcement of the Wi-Fi Alliance’s 802.11ac certification programme means 802.11ac equipped products can now be certified, but that process will take time as thousands of chipsets need to be tested.

The good news is the first certified chipsets are already creeping out and they come from the likes of Intel, Qualcomm, Cisco, Realtek, Marvell, Broadcom and Samsung – manufacturers with extensive networking expertise and who licence their chipsets to others. For example Intel has only one chipset certified – the ‘Dual band Wireless 7260’ – but it is expected to be at the heart of most Haswell-powered Ultrabooks.

A full list of 802.11ac certified chipsets can be found here.

Furthermore, adoption should be fast. The first 802.11ac routers carried a hefty premium, but this has dropped quickly to the point where price shouldn’t be a barrier to anyone keen to hop onto the bandwagon. In addition 802.11ac is extremely efficient and it brings power savings compared to 802.11n, meaning it is ideal for mobile devices.

As such, while 802.11ac products are only trickling out at present, it will turn into a tidal wave by early 2014.

Should I wait for 802.11ac?
All of which begs the question: should I now buy any device that isn’t 802.11ac compatible? The short answer is no. If you live alone in a small flat where you have no signal problems 802.11n may serve all your needs, but in larger, multi-user homes and homes with network attached storage the benefits of 802.11ac are simply too good to miss out on. Especially when buying devices you expect to keep for a number of years.

The longer answer is 802.11ac is a revolution that will be hard to actively avoid. Wireless ac will be built into most laptops and phones within the next 12 months and routers will increasingly come with it (though ISPs are typically slow to adopt new standards in the routers they give out, so plug an ac router into theirs and switch off their wireless to get around it).

It will take time and money for your home to be fully 802.11ac compatible, but it will be worth it.