What is the Asus ZenFone 5?

Following a couple of years off, Asus has brought back the ZenFone 5 – but things are markedly different compared to the handset to which we were first introduced in 2014.

Asus has added some premium design details, impressive hardware and a robust dual-camera arrangement into this supposed mid-range handset. But with such lofty promises, is it destined to trip up?

In recent years, Asus has taken a more focused approach to creating its smartphones. The company has chosen to centre around a single aspect of a device’s feature set to serve as headline-maker. The ZenFone Zoom, the ZenFone Selfie and, most recently, the ZenFone AR all fit this mould. 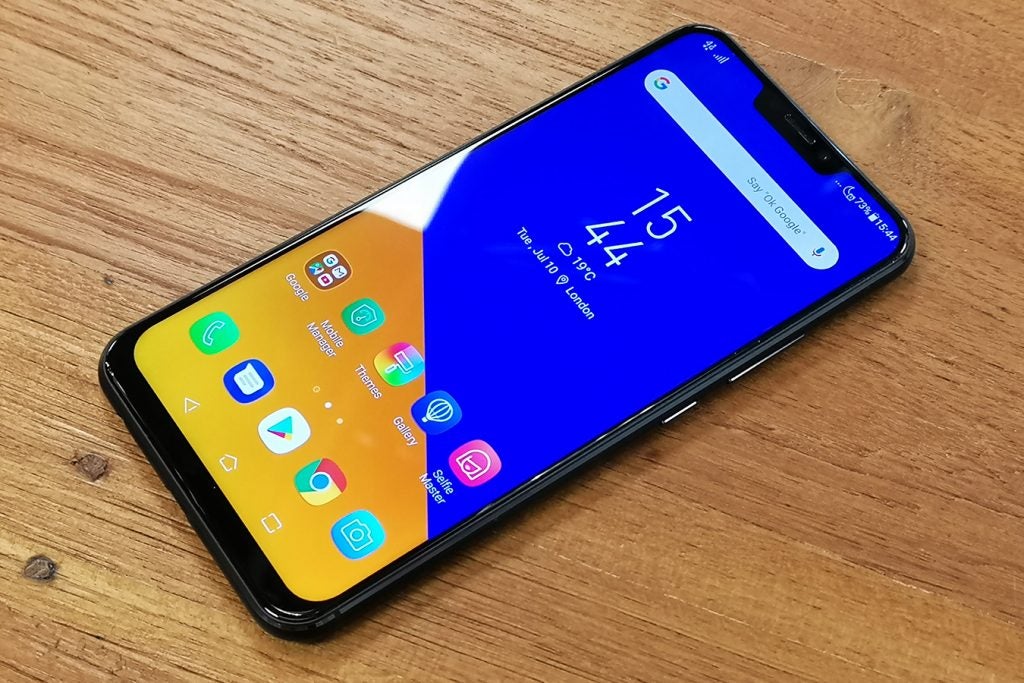 Meanwhile, numerical outings such as the ZenFone 5 have to adhere to a different approach, delivering consistency through every facet of the experience they offer. With this in mind, the design of the Zenfone 5 sets some high expectations.

Despite its standing, the ZenFone 5 looks and feels like a flagship device. It shares its bodywork with Asus’ Snapdragon 845-powered ZenFone 5Z flagship, and as such you can expect a beautiful level of fit and finish, punctuated by the company’s signature concentric hairline design on the device’s rear.

The way in which this back panel scatters light will be instantly recognisable to those familiar with Asus’ other products, reinforcing the feeling that the phone’s design has been considered and well executed.

The glass curves away to meet the phone’s aluminium frame, which features minute chamfers along either side to improve grip. Paired with a rounded, bead-blasted outer face, it feels nice under-finger and looks attractive, too. 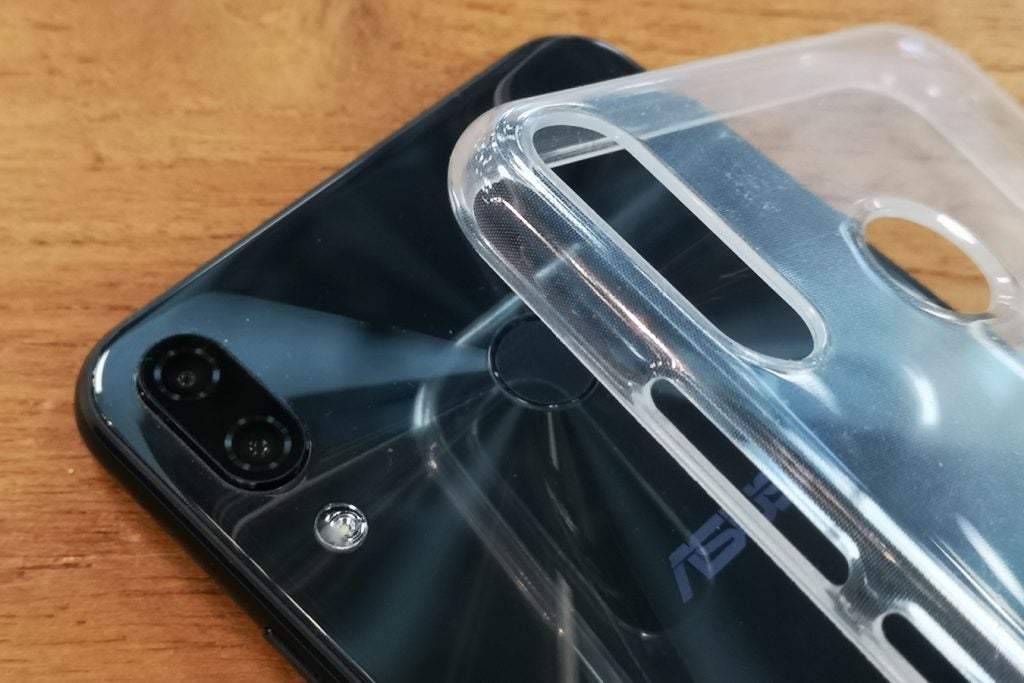 As is the case with every other predominantly glass-bodied phone right now, the only real concern is its penchant for attracting smears, fingerprints and smudges – which are an unavoidable evil.

Thankfully, the use of Gorilla Glass means the phone is resistant to scrapes and scratches. However, if you’re likely to be exposing your new ZenFone to some rough and tumble, the flexible, transparent case in-box will be a welcome inclusion.

The rear of the device is home to a centrally positioned fingerprint sensor, which, despite the phone’s sizeable footprint, sits naturally under your index finger. In the top-left corner, you’ll find the phone’s dual-camera array, aligned vertically in the style of the iPhone X.

All the hardware controls (the power key and volume rocker, for example) are rendered in metal to match the phone’s frame and sit along the right side of the device. The loudspeaker, reversible USB-C connection and a standard 3.5mm headphone jack reside along the phone’s bottom edge.

Despite its size, the ZenFone 5 is a surprisingly lightweight handset at 155 grams (10g lighter than last year’s ZenFone).

One glaring omission is the absence of any form of IP certification, so while the phone might not complain about being used in a dusty room or with damp hands, submerging your ZenFone in water is a definite no-no.

At 6.2 inches, the ZenFone 5’s screen is decidedly big. The move to more unorthodox aspect ratios – such as the tall 18.7:9 panel on the 5 – has allowed manufacturers to squeeze much larger displays into handsets that previously sported more conventional 16:9 screens.

Indeed, the ZenFone 5’s dimensions aren’t all that different to the previous year’s ZenFone 4 (it’s a little shorter), but Asus has managed to cram in an extra 0.7 inches of display into that same amount of real-estate. 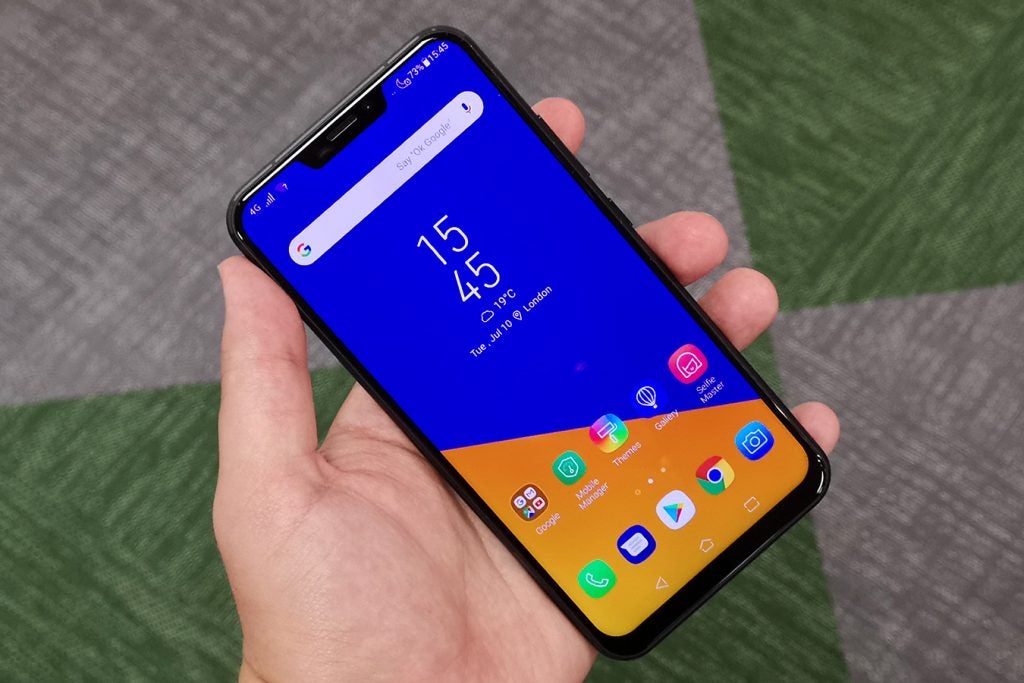 The company has achieved this by minimising the bezels along the sides and top of the device. A definitive ‘chin’ remains, which takes the form of a thicker strip of bezel beneath the display. Nevertheless, the collective effect still renders the ZenFone 5 an excellent choice for media-lovers, with an impressive 83.6% screen-to-body ratio.

Like every other phone pushing more pixels to the edge of the frame, the notification LED, earpiece and camera reside within a notch that cuts into the upper edge of the screen. Regardless, there’s still plenty of room either side for multiple notifications and system icons to remain easily legible.

In truth, it’s unclear why Asus didn’t sit the screen lower on the phone’s front, removing the aforementioned ‘chin’ and notch at the same time. Could it be that the company wanted to capitalise on the interest in this design quirk, as popularised by Apple’s latest iPhone? It’s a possibility.

The panel itself is an IPS+ LCD with an extended Full HD+ 1920 x 2246 resolution. It’s a sharp display that can happily go toe-to-toe with the likes of the Huawei P20 for general clarity – but it loses out on any form of HDR (high dynamic range) viewing.

It shines in other areas, though, with a promised maximum brightness of 550 nits and support for 95% DCI-P3 colour gamut. This means accurately coloured movies on-the-go.

In practice, the screen pushes out fractionally cooler visuals than I’m used to. Should you find the same, there’s an impressive range of display settings with which to play. You can tweak colour temperature, colour mode and add in a blue light filter for late-night viewing. There’s even an option to hide the notch using a software-based black bar.

One thing you have less control over is the screen’s brightness. There are toggles and sliders for manual brightness and screen time-out, but the automated adaptive brightness mode is a little unreliable.

On occasion it was slow to respond, taking far too long to acknowledge a shift from a darker to a brighter environment or vice versa. Sometimes it set the brightness at completely the wrong level, more often than not burning your retinas in a dark room unnecessarily.

Dodgy brightness controls aside, my biggest concern was navigating such a sizeable screen with a single mitt. Thankfully, there’s a dedicated one-handed mode built into Asus’ user experience. Once I’d figured it out, it offered the perfect solution; getting to that point wasn’t the easiest of journeys, however.

Once you’ve found and activated ‘One Hand Mode’ within the ‘Advanced’ section of the phone’s settings menu, a double-tap of the home button icon shrinks the interface down into the bottom left-hand corner of the screen. You have the option to resize it, or scale the UI back up to full screen with a single tap. However, as a right-handed user, having the condensed interface sitting on the left side of the screen still made for a considerable stretch.

It required a deep-dive into the phone’s poorly translated and typo-ridden ZenUI Help to learn that the white bar on which the two resizing controls sit is itself a manipulable element. A note worth making if any readers of this review run into the same baffling interface conundrum.