What is the Asus ZenFone 4?

The mid-range ZenFone 4 is Asus’ latest flagship smartphone. With pricing starting at £450, it targets the same segment of the market as the stellar OnePlus 5, which to date is TrustedReviews’ recommended sub-£500 handset.

Featuring an attractive design, above-average camera and reasonably good battery life, the ZenFone 4 is Asus’ finest phone to date, and will meet 99% of people’s needs.

It’s only serious shortcomings are its lower-power CPU compared to rival OnePlus 5, and the slightly confusing menu system, the result of Asus’ ZenUI. The ZenFone 4 follows the same mixed-material strategy as the Galaxy S8 and iPhone 8, featuring a Gorilla Glass 4 front and back and metal sides.

The boxy design isn’t the most original around, and makes the ZenFone 4 look a little like the mongrel child of the Galaxy and Xperia phones – but I’m oddly fond of it.

The device feels solid in the hand and, unlike the U11, the glass isn’t terribly slippery, even when wet, which is an important factor in rainy London.

It also ticks all the right boxes when it comes to functionality. On the front you’ll find a fingerprint scanner, which although not the fastest around, works well enough, and on its bottom sit a bog-standard USB-C charging port and 3.5mm headphone jack.

The 64GB of internal storage will meet most user’s needs, and the inclusion of a microSD card makes it easy enough to add further space if required.

I’m also fairly impressed by the phone’s audio capabilities. The dual-speakers aren’t good enough for serious music listening, but they’re clear and loud enough for some Netflix action. The addition of hi-res audio and DTS Headphone:X support are also a bonus for audiophiles and serious movie fans who want to experience virtual surround sound. 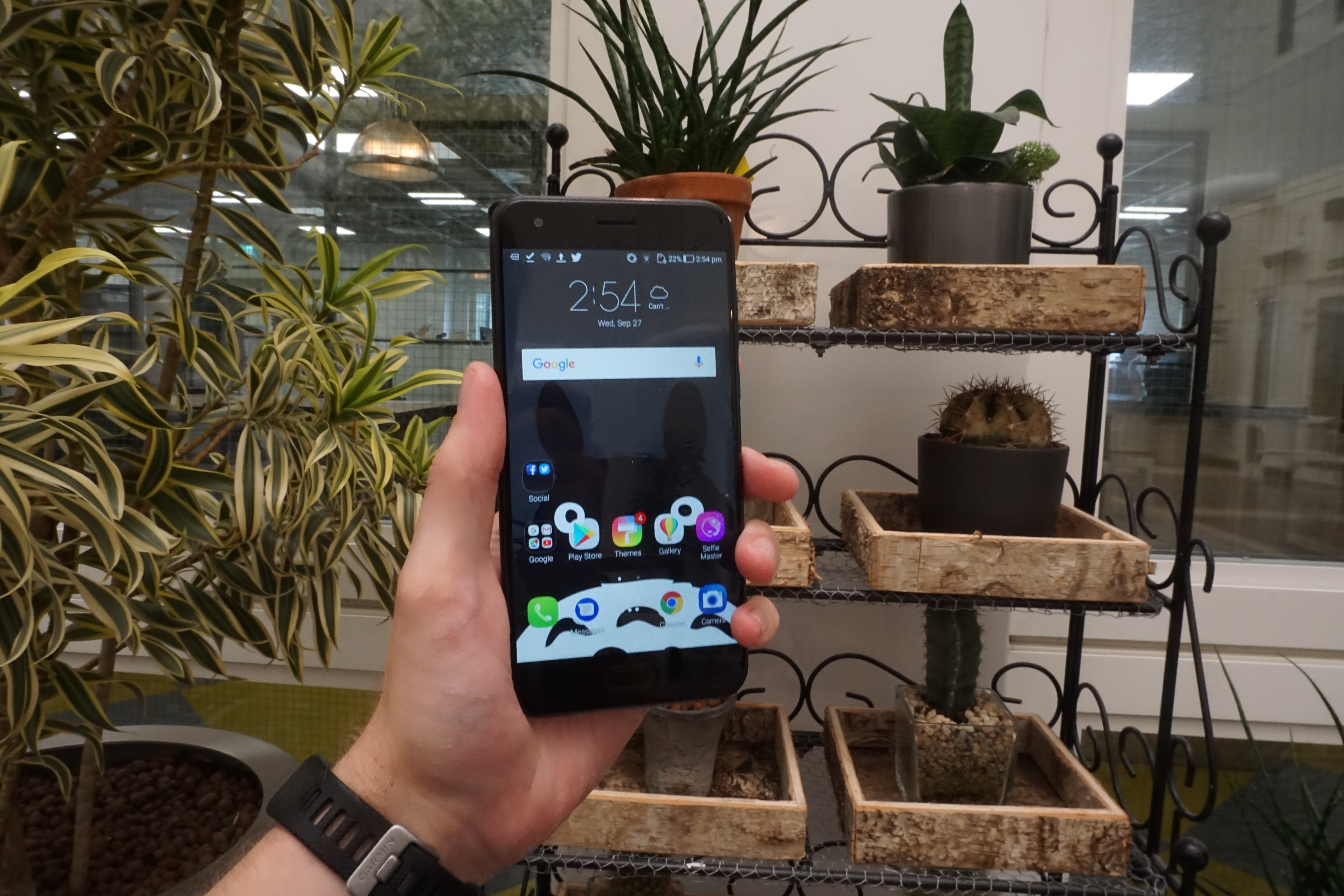 My only concern about the handset stems from the use of glass. I’m not a fan of glass-backed phones for a couple of reasons. For starters, every such device I’ve tested has been a smudge magnet. This remains true of the ZenFone 4, which looked like it had been taken through a Tough Mudder run within minutes of leaving the box.

But more importantly, no matter how careful you are, Gorilla Glass is still far too easy to crack or scratch. Asus does include a case with the ZenFone, which helps mitigate the issue, but following only a week with the device, the chassis was riddled with marks and blemishes. I’m still quite unsure of how the front of the device picked up a scratch after spending an evening in my pocket.

The 5.5-inch screen’s 1080p, FHD resolution matches that of the OnePlus 5. Some people may bemoan the fact that Asus didn’t take the step up to QHD, but the fact remains that for most people FHD will be more than good enough. You’ll struggle to spot individual pixels, and text and icons are universally sharp.

I was a little less impressed with the ZenFone 4’s colour calibration, however. IPS panels are never as vibrant as OLED screens and don’t display blacks as deeply. But the trade-off is cleaner whites. This isn’t the case with the ZenFone 4 out of the box, where whites suffered a noticeable reddish tinge. Colours were also a little cool for my liking. 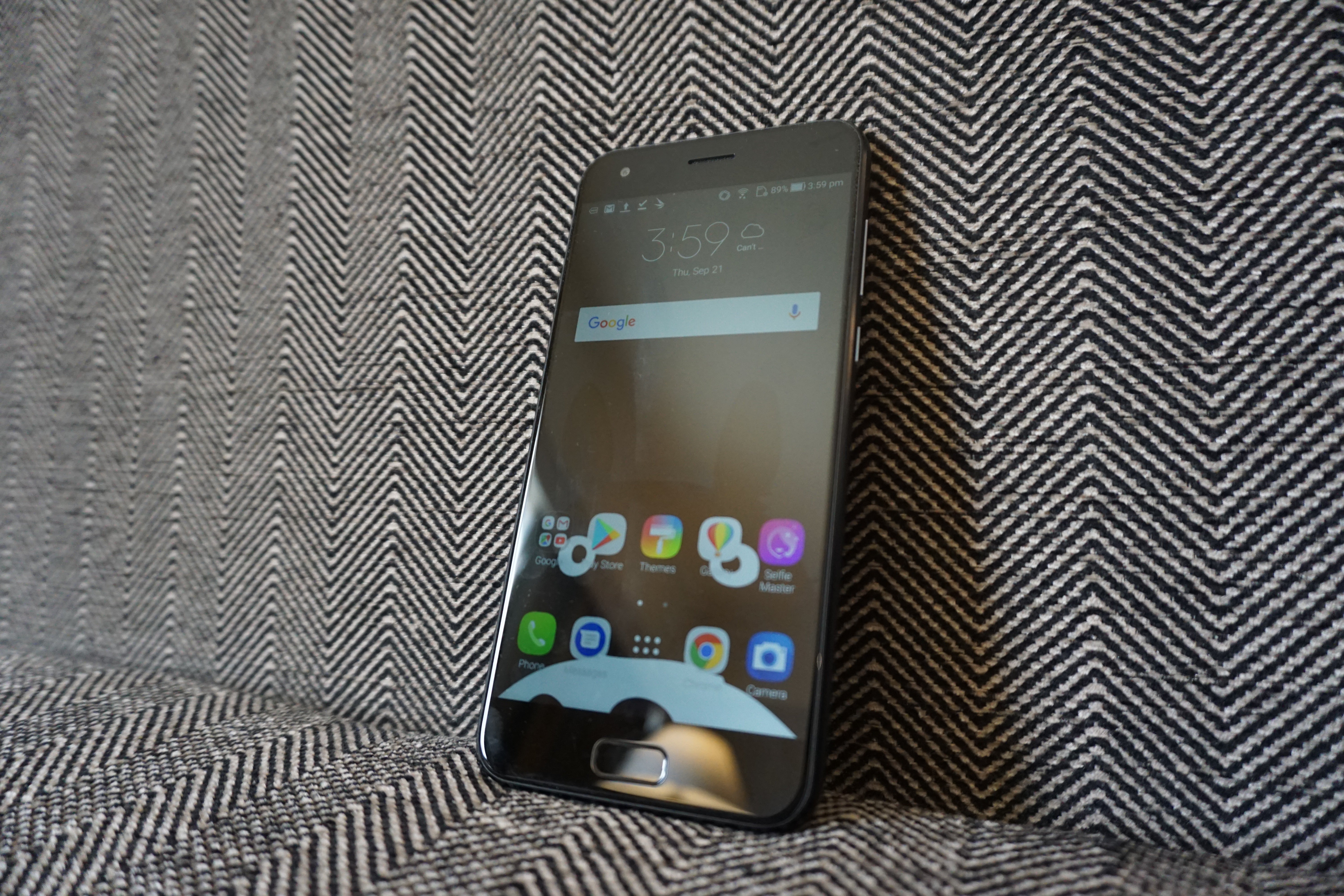 Fortunately, both issues were easy enough to fix. Turning of the adaptive brightness dramatically improved whites and the Asus Splendid screen technology made it easy to manually adjust the ZenFone 4’s screen temperature.

The only issue I couldn’t fix was the ZenFone 4’s maximum brightness, which is a little low for my liking. Even cranked to its maximum setting, the screen wasn’t anywhere near as bright as that of the OnePlus 5. This could make it tricky to use the Asus in very bright sunlight. This is a little odd, since Asus quotes the brightness as  an impressive 600 nits max.

The ZenFone runs the latest Android Nougat 7.1 software overlaid with the Asus ZenUI skin. An update to Oreo has been confirmed.

ZenUI remains a mixed bag, although the ZenFone 4 sees a significantly improved version. Starting with the positives, Asus has radically decreased the amount of bloatware. Compared to past tablets and phones I’ve tested, the number of custom apps installed here is fairly limited – and in general offer things that most people would want. Asus-specific services, such as WebStorage, are also neatly contained in a folder, making them easy to ignore and hide from the homescreen.

I’m not hugely enamoured of the changes to the UI, however. Asus has completely reworked Nougat’s settings menu, loading it with more customisation options than can easily be counted. Some, such as Splendid, or the ability to create custom audio profiles are useful, but most of the changes feel fairly pointless and detrimental to the user experience. Considering how good Nougat’s UI is out of the box UI, I can’t help but think Asus would have been better off leaving the system alone. 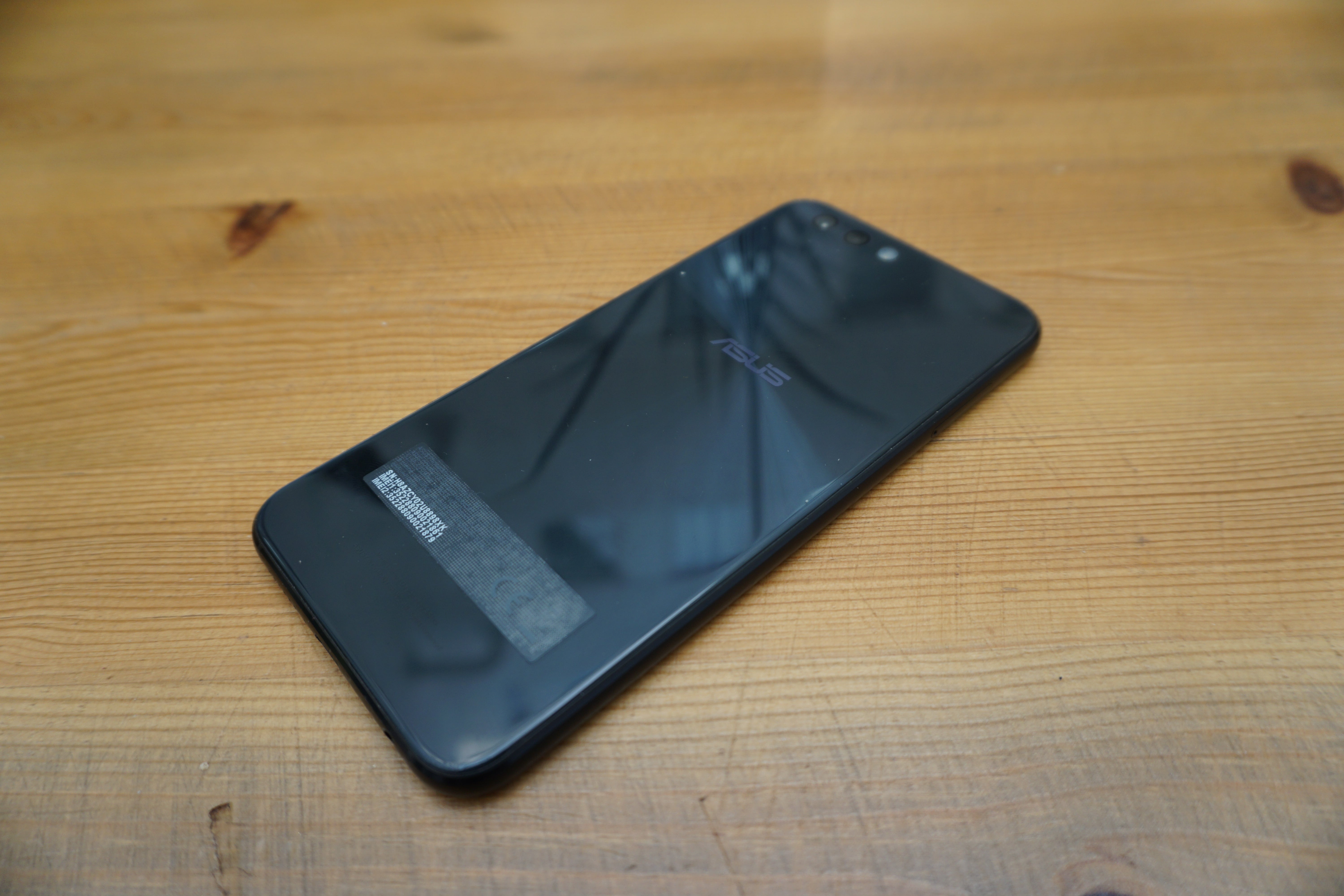 Under the hood you’ll find a Qualcomm Snapdragon 630 (UK) and 4GB of memory. The combo doesn’t match the specs of the OnePlus 5, which features an 8-series CPU and more robust 6GB of RAM. Nevertheless, it will prove good enough for most users.

Multi-tab web browsing runs smoothly and the ZenFone 4 streamed video and music without issue. In addition, my synthetic benchmark results put it just below most of the 630-powered handsets, but woefully behind rival OnePlus 5.

More demanding processes such as 3D gaming are slower to load and run compared to the OnePlus 5, which overall feels slightly faster and slicker than the ZenFone 4. Day to day, however, the majority of folk are unlikely to encounter any performance problems.

The only issues I noticed stemmed from the ZenFone 4’s ZenUI software; not its CPU. Most applications ran smoothly, but the camera app was fairly temperamental and would on occasion freeze or crash. On a couple of occasions it even caused the entire phone to crash, forcing a hard reset. 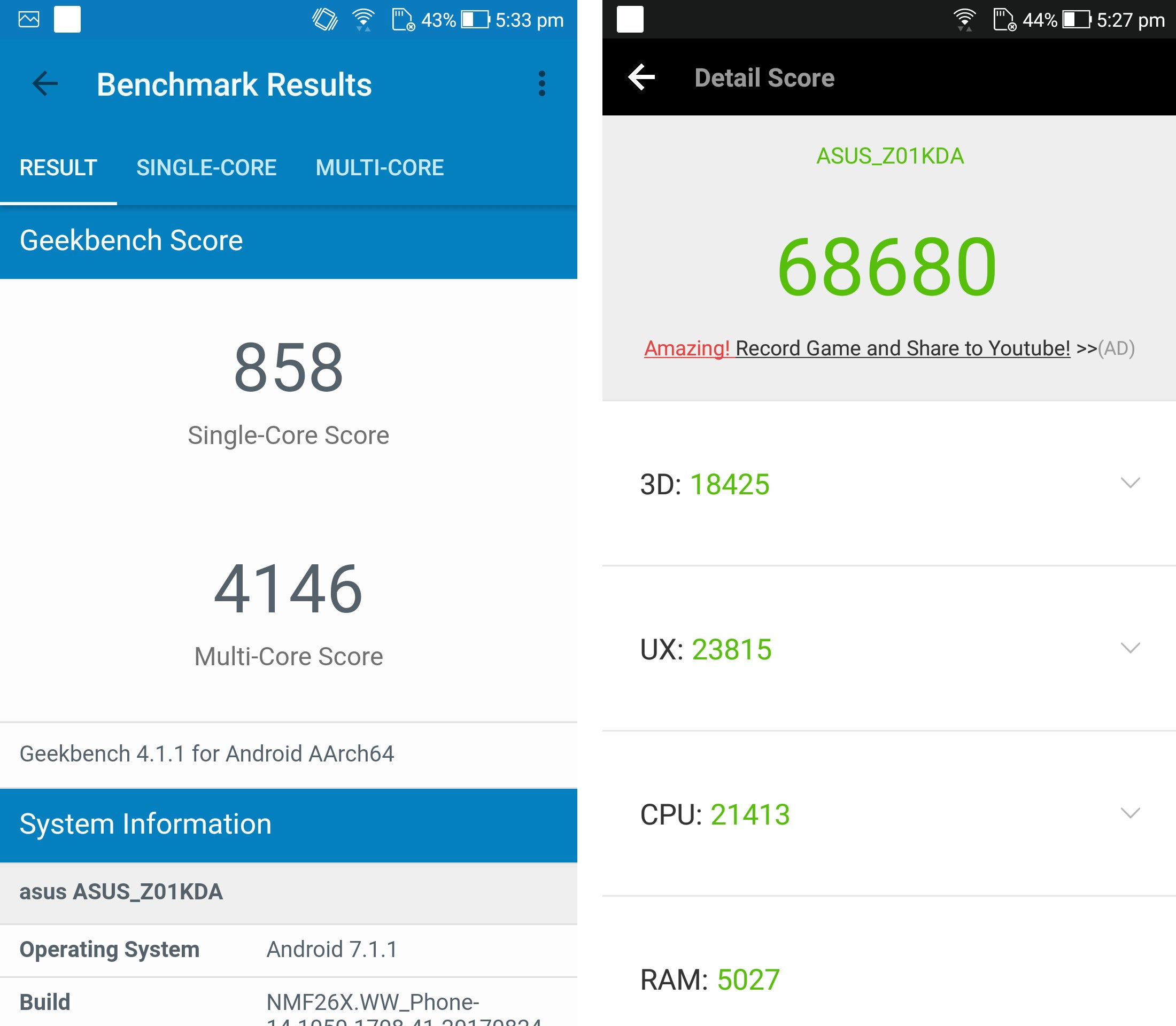