It’s somewhat surprising just how long it’s taken for phone manufacturers to really cotton onto the phenomena that is ‘selfies’. With its new Zenfone Selfie, Asus becomes one of the very few very few manufacturers to make a phone dedicated to the photographic self portait.

Like the HTC Desire Eye, the Asus Zenfone Selfie features matching front and rear cameras with dedicated flashes for both, making them truly adept at taking photos of you and your mates, you and the Taj Mahal, you and that funny looking dog, you and…

It would be easy to say the Zenfone Selfie is basically the Zenfone 2 with a fancier front camera, and it would also be very accurate. 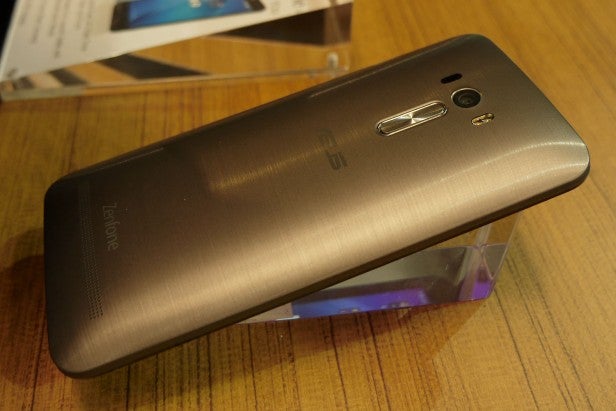 The two phones look essentially identical with their 5.5in screens, swirled metal bezel, curved plastic back and rear mounted buttons. There really is next to nothing distinguishing the two aside from the larger camera that sits in a slightly elongated front bezel.

This is no bad thing, though, as both are attractive phones. There’s none of the truly premium metal build quality of your iPhone 6, One M9 or Galaxy S6 but that’s why this is a much cheaper phone.

Instead you get an array of plastic backs in various fetching colours and finishes including a fairly convincing faux brushed metal. 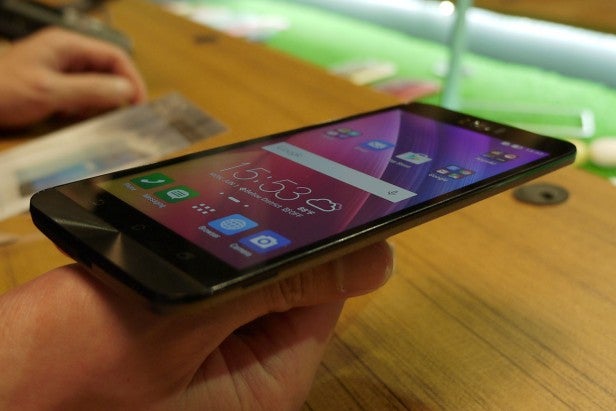 The back has a simple gentle curve to it that combined with its relatively modest 156.5 x 77.2 x 10.8 mm dimensions it feels nice and comfortable in the hand.

We’re not overly keen on the power button being on the top edge, especially when the volume buttons are on the back – it just feels inconsistent, but otherwise it seems to be an easy device to handle.

Like Samsung, Asus is sticking with touch buttons, rather than on screen buttons which makes for a bigger bezel but not so much so that it bothered us.

All told it’s a nice handset that feels about right considering its likely mid-range price. 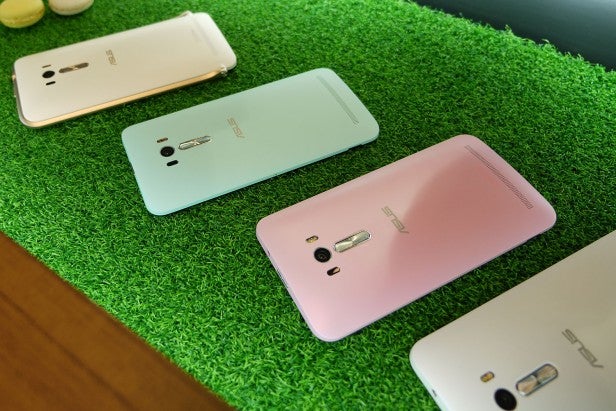 Inside the Zenfone Selfie is a Qualcomm MSM8939 Snapdragon 615 with 2/3GB of RAM, 16/32GB storage and a microSD slot. There’s no waterproofing, fingerprint reader or anything to new fangled here. Just solid mid-range specs.

The screen is an LCD panel with a 1080p resolution. That may not sounds all that impressive in this day and age but it’s a perfect bright, colourful panel with excellent viewing angles and, from what we could tell, deep blacks. It’s of course topped by Gorilla Glass.

One trick it has up its sleeve is that it is dual-SIM. It will also run Android 5.0 Lollipop and there’s an optional selfie Swing case that incorporates a metal arm that folds out to either act as a stand for hands-free selfies or as an extension to your arm for further away selfies – it’ll also be easier to grip, though you will of course need to use a timer mode to activate it. The main feature of this phone, though, is it cameras. Front and back both employ 13mp sensors and each is accompanied by a dual-tone flash for more natural-looking colours.

The rear camera is f2.0 while the front one is slightly less speedy at f2.2, making neither of them particularly fast lenses by modern phone standards. The rear camera also includes laser-assisted auto-focussing.

Trying the cameras out, the rear one did indeed appear to have a nippy auto-focus and results from shots with and without the flash were pretty decent. It’s far too early to say just how good they are but it definitely coped pretty well considering the fairly challenging lighting conditions. 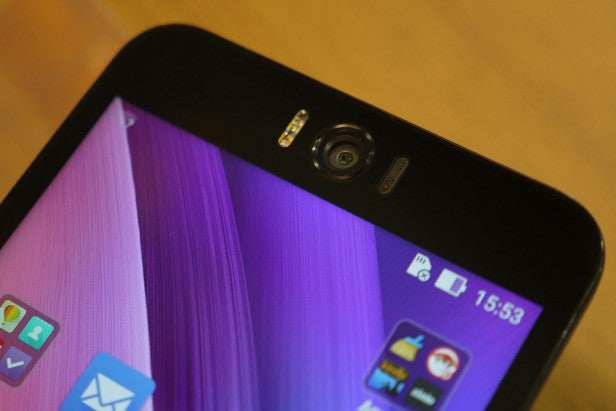 More importantly, the front facing camera also did pretty well. Out test shots were rather disturbed by the strong spotlights behind but still came out looking in focus, well metered and with a natural looking skin tone, despite the use of flash. All told it perfectly demonstrates the advantage of having a properly thought out selfie camera.

Whether you can just make do with turning your phone round and using the rear camera is a different matter but having tried numerous times ourselves to do just that we’d suggest dedicated selfie cameras are the way to go.

The Zenfone Selfie is unlikely to sway those considering the latest and greatest Android handsets but for those just looking for a mid-range handset that does the basics well and that can also boast an easy way to take great selfies it absolutely fits the bill.

We’ll have to wait for our full review to see exactly how it compares to the HTC Desire Eye but first impressions are definitely good. The Asus Zenfone release date is imminent thought pricing has yet to be announced.