We’re not giving the Zenfone 3 a score just yet, since Asus hasn’t confirmed the phone’s UK price and there were some potentially atypical issues with out test unit that we need to investigate

What is the Zenfone 3?

Since Motorola threw down the gauntlet with its original Moto G, smartphone makers have been embroiled in a price-slashing war. As a result, we’ve seen all manner of fantastic value-for-money handsets appear, such as the OnePlus 3, Nexus 6P and Moto Z Play. The Zenfone 3 is Asus’ stab at the market, and aims to offer top-end-ish hardware at a price point that won’t break the bank.

Having had a play, I can confirm that the device certainly looks the part and generally delivers great performance on a par with the Huawei Nova and Alcatel Idol 4S. However, as is the case with almost all mid-range handsets right now, its software leaves a lot to be desired. 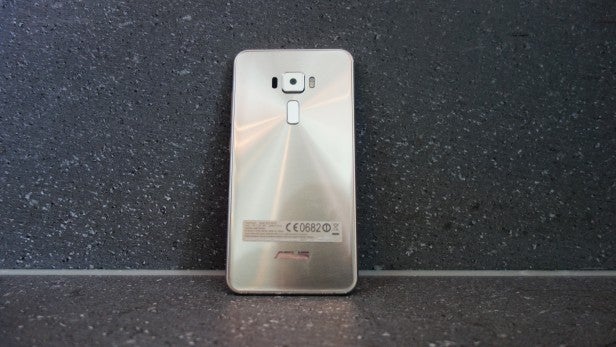 The phone looks like a slightly more boxy Samsung Galaxy S7. Featuring a glass back and metal sides, were it not for the Asus logo and absence of a physical home button you could easily mistake the Zenfone for a Samsung handset. Some will bemoan the lack of originality, but in my mind the Zenfone’s design looks far nicer than that of most mid-range handsets.

Technically, on paper the Zenfone 3 is an impressive bit of kit. Despite being a mid-range handset, Asus hasn’t made too many compromises.

Around the back you’ll find a fingerprint scanner, which can used to unlock the phone or approve specific actions – such as in-app payments. On the bottom you’ll find a USB Type-C charging port, as opposed to the older and slower Micro USB. The SIM tray also contains a microSD card slot, making it quick and easy to upgrade the handset’s built-in 64GB of space. A cheaper 32GB model is also available for those with lower storage requirements. Audio fans will be pleased to see that Asus hasn’t removed the 3.5mm jack – looking at you, Apple.

The phone’s slightly curved edges, reasonable 7.7mm thickness and 155g weight also make it surprisingly comfortable to hold when compared to other glass-backed phones – the Galaxy S7, for example.

I’m a little concerned about build quality, though. The glass rear – like on past Samsung and Sony phones – feels like it will pick up scratches fairly easily. It’s also a smudge magnet, which will be an annoyance for folk who like their phone to look pristine. 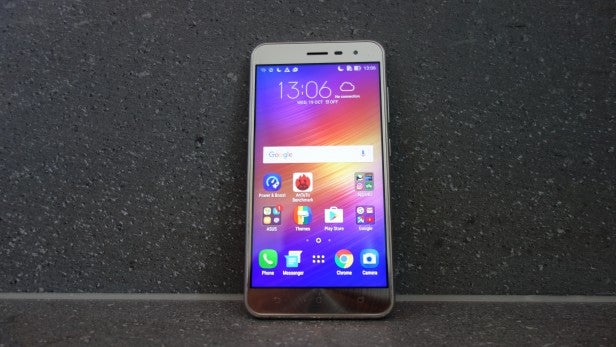 The glass front on the model I was testing hadn’t been glued down properly. The bottom-left corner would lift a fraction of a millimetre off the phone’s main body, regularly letting light from the screen’s LEDs leak out. Since I’ve only had a chance to use one Zenfone 3, I can’t confirm if this is an isolated incident.

Otherwise, the 5.5-inch screen is pretty good for an affordable phone. The 1080p resolution may not match higher-end handsets, but it’s more than sharp enough and you’ll struggle to spot individual pixels.

The IPS panel has also been well calibrated, and unlike the OnePlus 3’s AMOLED screen, which was horribly oversaturated, the Zenfone’s display offers up a nice neutral tone. Whites are clean and colours look natural. Some will find the Zenfone 3’s native display setting a little too cool, but I like it. Those who want more pop can adjust the screen’s colour temperature in the Zenfone’s Settings menu, thanks to the addition of Asus’ ZenUI 3.0 software. 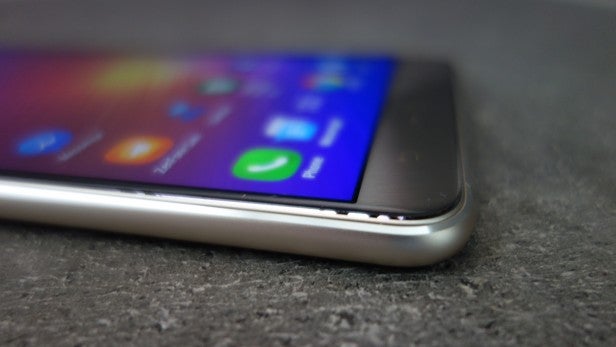 The aforementioned colour temperature setting is pretty much the only feature I like about ZenUI. I’ve never been a fan of Android skins, since they generally delay how quickly phones can receive software updates and also add pointless bloatware.

There’s no word if the Zenfone will be upgraded to Nougat, but the handset certainly is full of bloatware. ZenUI isn’t the worst offender I’ve seen in this regard – that honour is reserved for Huawei and its Emotion UI – but Asus’ skin still adds more duplicate apps and pointless features than I’d like.

Opening up the app tray you’ll see everything from clone Asus cloud storage apps that offer little improvement on Google’s central Drive, to pointless duplicate gallery and photo services that don’t add anything to the OS’s core offering.

I’m also not sold on the UI changes that Asus has made to Android. The Settings menu has been entirely reconfigured, to the point that even seasoned Android users will struggle to find certain options.

The pull-down Quick Settings and Notifications bar has also been redesigned, replacing Marshmallow’s simple, to-the-point UI design with childlike spherical shortcuts. The design change isn’t terrible, but it just feels unnecessary and is indicative of pretty much every aspect of ZenUI. 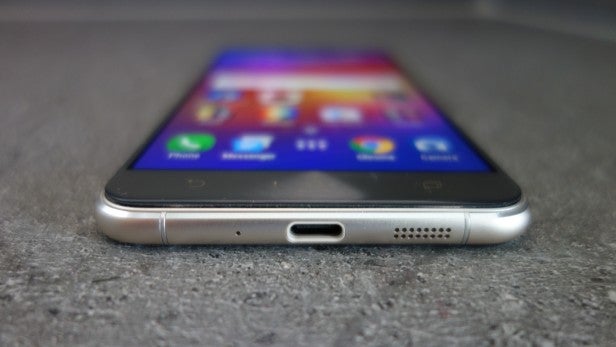 To be fair, this isn’t an issue that affects Asus alone. Bloatware and pointless UI changes are a common issue on 99% of mid-range handsets I see, including the OnePlus 3, Huawei Nova and Alcatel Idol 4S. I can’t help but wish that companies would listen to consumers and realise that most people would be more than happy with unskinned Android on their phones.

Over my week-plus of using the phone I haven’t experienced that many surprise bugs or unexpected glitches, which are another common problem on phones with heavy Android skins.

The octa-core Qualcomm Snapdragon 625 and 4GB of RAM performed better on the Zenfone than the Huawei Nova, which has the same specs. For much of the time, the phone glided between menus and opened apps chug-free. Games did run on the device, but the Zenfone 3 took longer to load intensive titles such as Riptide and Asphalt than top-end phones with 820 CPUs.

The only performance issue I did notice is that during prolonged video streaming and gaming sessions the Zenfone 3 would sometimes heat up. The temperature wasn’t Galaxy Note 7 explosive, but it was enough to cause concern.

The Zenfone’s synthetic benchmark scores did reveal some performance shortcomings, however. The handset’s 62,371 score on the generalist AnTuTu test is lower than most mid-range handsets, such as the similarly specced Idol 4S, which score 76,756. The same issue occurred on the gaming focused 3DMark IceStorm Unlimited test, where the Zenfone 3 scored 14,037. The Idol 4S scored a more robust 17,554. 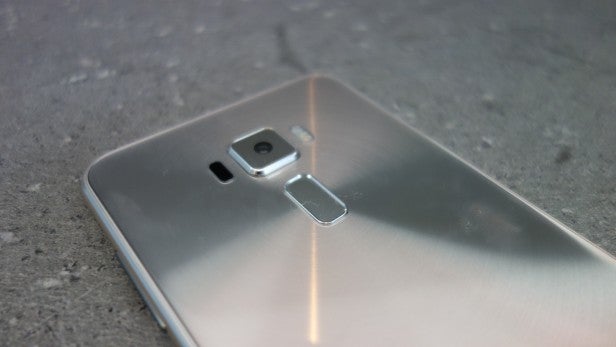 Battery life is one area where the Zenfone 3 excelled during my tests. The non-removable Li-Ion 3,000mAh battery easily lasted one and a half – if not two – days in regular use off a single charge. Regular use entailed listening to music on the way to and from work, playing some games over lunch, making and taking a few calls, regularly checking social media and email, and watching an episode of Stranger Things on Netflix before bed.

The Zenfone 3 also dealt with demanding tasks, such as video streaming and 3D gaming, pretty well. Streaming video over Wi-Fi with the screen at 75% brightness, the Zenfone 3 lost between 8-11% of its charge per hour. Competing handsets generally lose between 10-15% of their charge tasked with the same test.

Playing 3D games such as Riptide GP2, the Zenfone 3 lost between 13-16% of its battery per hour – again, this is impressive. In the past, the majority of mid-range phones I’ve tested have lost as much as 20-25% of their battery per hour when gaming.

Camera tech is an area with which most mid-range phones struggle. The majority come with undersized sensors and don’t have the hardware to capture anything but holiday selfies and photos for sharing on social media.

The Zenfone 3 doesn’t change this trend, but as phone cameras go, it isn’t terrible. The 16-megapixel rear camera on paper beats the specifications of most mid-range handsets. The f/2.0 aperture is pretty much par for the course, but the Sony IMX298 camera sensor is a step up from the components used on most sub-£400 handsets. 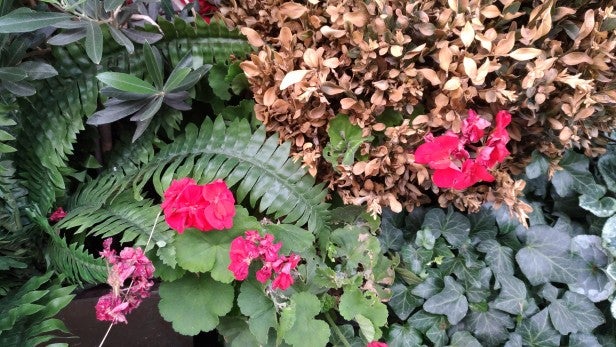 For a mid-range phone, the Zenfone 3’s camera isn’t bad 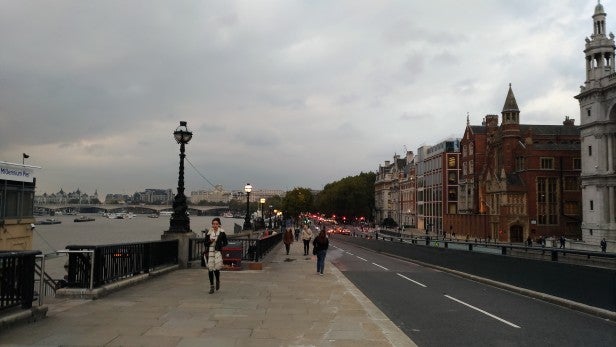 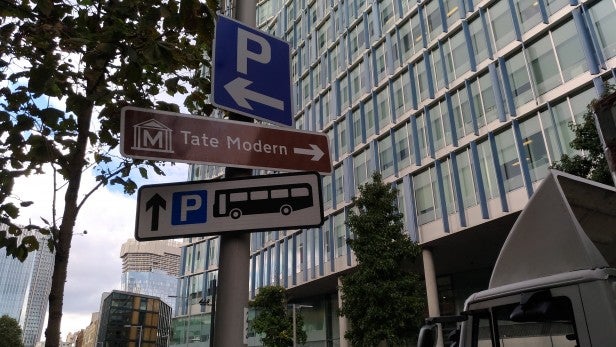 …but performance doesn’t match that of cameras on more expensive handsets, such as the Galaxy S7

The sensor is identical to the one in the OnePlus 3 and means that the phone is capable of capturing reasonably good photos in decent light. Shooting around London during one of the city’s rare sunny days, I was able to capture good cityscapes with decent contrast and suitable detail. Colours don’t look exaggerated and, unlike quite a number of handsets, the phone doesn’t oversharpen images.

The autofocus is also okay, but not great. Much of the time it will focus on your intended shot within only milliseconds but, like all the phone cameras I test, it struggles with moving objects.

The inclusion of optical image stabilisation (OIS) is a rare sight in the mid-range market, and on paper this should elevate the Zenfone 3 above the competition when it comes to low-light performance. However, during my tests I noticed only a negligible improvement and still wouldn’t recommend the phone for night-time photography, or low-light clubs shots without the LED flash.

Even with OIS, noise crept into photos taken in even moderately dim conditions. As a result, captured photos weren’t good enough for sharing, even on Facebook.

The 8-megapixel front camera has the same f/2.0 aperture and can record video at 1080p, which makes it more than good enough for basic video calling. You’d do well to avoid the beauty mode, though. 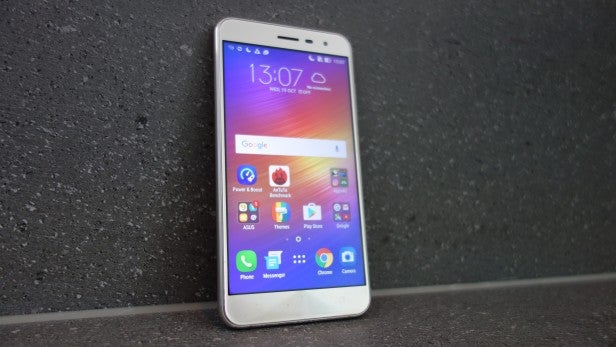 As mid-range phones go, there’s plenty to like about the Zenfone 3. The handset I tested offered great battery life, reasonable performance, and featured a capable (for the money) camera and nicely balanced display.

ZenUI is a fairly awful Android implementation, but it’s just one of many that are clogging up the world of mid-range handsets.

If the Zenfone 3 is competitively priced in the UK, as it is in many other markets, the phone could be a solid choice for buyers on a budget. However, it will only deliver on its opening promise if my initial concerns about build quality aren’t found to be a problem across the board.