What is the Moto Z Play?

Motorola’s flagship Moto Z is in real danger of being shaded by its cheaper brother, the Z Play. The Lenovo-owned brand has taken what should have been a boring mid-range phone and turned it into one of the standout handsets of 2016.

In truth, only two of its key features contribute to the elevation to such status. First: the enormous 3,510mAh battery opens the door to true two-day battery life. Second: the modular, magnetic back panel allows for Moto Mods additions that might be genuinely compelling.

In every other area the Moto Z Play is a normal, mid-range smartphone, and although its mid-£300 price means it will naturally be compared to the outstanding OnePlus 3, the two handsets are actually very different. 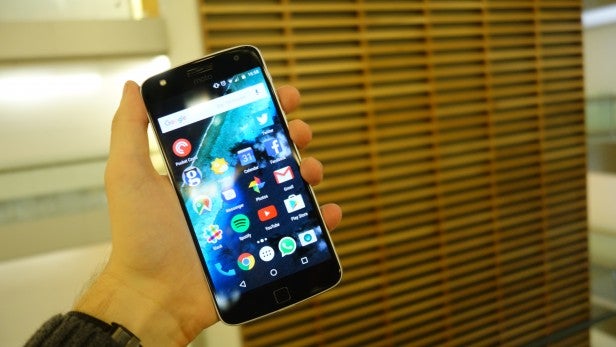 The Moto Z Play sports a very similar design to the flagship Moto Z. A 5.5-inch screen is surrounded by a silver frame, punctuated by a pair of lighter silver antennae. It’s much heavier, though, weighing in at a chunky 165g – a full 29g heavier than the Moto Z. It’s thick, too, at 7mm.

The rear of the phone is made from a super-smooth glass that’s nearly impossible to grip comfortably. 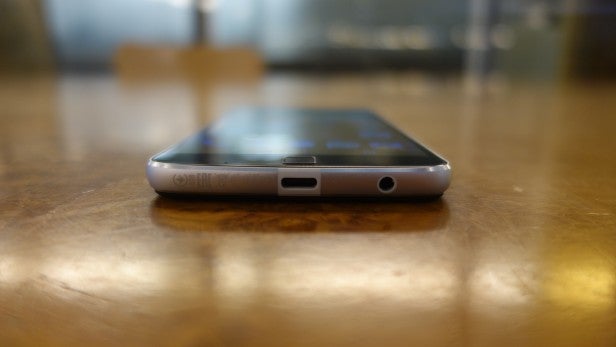 Luckily, the handset isn’t meant to be used in that manner. The exposed connectors at the bottom of the backplate are where you’ll snap on Moto Mods, and the first one you’ll likely employ is the plastic back that comes in the box with the phone. My unit came with a stylish, black plastic cover that looks like it’s been run over repeatedly by a Ford Mustang doing wheel spins. 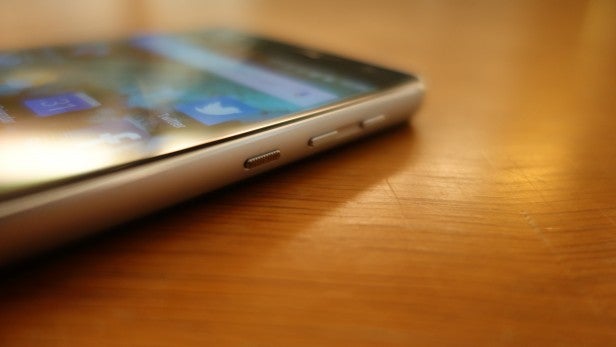 It’s easy enough to hold in one hand, but the extra weight and thickness is certainly obvious – although those upgrading from a low-end phone are unlikely to notice. I did find that the plastic rear did get pretty slippery when my palms became sweaty.

I have pretty average-sized hands and my thumbs don’t comfortably reach the top of the screen when holding the phone one-handed, although it’s possible with a stretch.

There are other Mods available for the Moto Z Play, including a zoom-lens Hasselblad camera and a JBL speaker/stand/battery pack combination.

Up top, there’s a round camera module that incorporates a dual LED flash and 16-megapixel camera. Without the backing in place, the camera module protrudes significantly. In normal use, however, the sensor will be shielded by the thickness of the back cover or whichever other Moto Mod you happen to be using.

On the top edge of the phone you’ll find the SIM card/SD card tray combination, and that’s it. At the bottom, there’s a USB Type-C connector and a 3.5mm headphone jack (the latter isn’t included on the flagship Moto Z).

The right-side is home to three equally-sized buttons in the form of two volume keys and a textured power button. Even after a week of use I struggled to distinguish between the two volume buttons and the power key, especially when the phone was in my pocket. The fact they’re evenly spaced doesn’t make things easier.

The screen doesn’t benefit from a Gorilla Glass coating, which is especially pertinent for me as my previous Moto X Style’s screen was destroyed after being ripped from my hands (and then dropped) by a bicycle-riding thief. 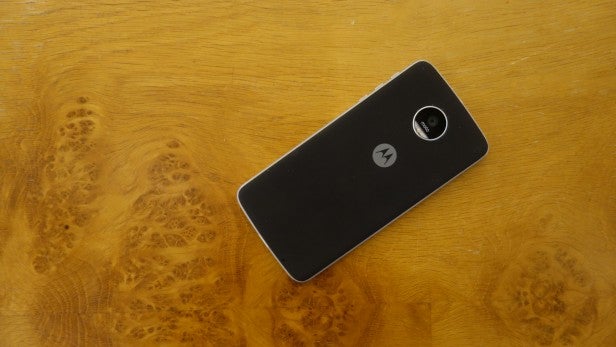 Under the screen is a rather ugly square fingerprint scanner. It’s undeniably fast and responsive, but it’s deeply unattractive, especially since its sole purpose is to lock and unlock the phone. It doesn’t double up as a Home button as it does on the iPhone 7 or OnePlus 3, which seems like a wasted opportunity.

The Moto Z Play sports a 5.5-inch, Full HD Super AMOLED screen with a 407ppi pixel density. Full HD is a fine resolution at this size and I experience no issues with jagged lines or blurry apps.

The screen’s maximum brightness doesn’t match up to that of the latest high-end flagships – the Samsung Galaxy S7, for example – but it’s more than bright enough for outdoor use. I did bump up the brightness a little higher than I needed to because I found the auto-brightness function could be too aggressive when dimming the screen, making it difficult to see.

Viewing angles are wide, with the screen appearing only slightly dimmer when viewed from oblique angles. Whites are clean and blacks are nice and deep. Colours could certainly be richer, but at this price point it’s all very acceptable.

The display is much brighter than the OnePlus 3’s screen and is warmer, too: where the OnePlus had a slight blue tinge to it, the Moto Z has a comfortable, more yellowy hue.

The left and right portions of the bezel are pretty thick, with a black line followed by the thick antenna really highlighting this phone’s budget compromises.

The display works in tandem with a small motion sensor on the bottom left of the phone that senses when you wave your hand over it and lights up the screen with a simple black and white interface to show you any missed notifications. You then press and hold on these notifications to either dismiss or activate them.

It’s cool when it works, although I often found the phone would light up of its own accord when nothing was happening around it. I also miss the presence of a regular coloured LED, making me aware of any missed notifications at a glance.

The bult-in speakers are nice and loud, which makes them great for watching YouTube videos with multiple people and filling a room with sound. They’re not amazing for music, as you’d expect, but they sound loud and clear from any angle.