Asus is always one of the first to integrate new technologies, for the simple fact that it either helps design or create so much of it. As such then, it’s no surprise to see its logo on the first notebook we’ve seen in the labs featuring Windows Sideshow. Sideshow is a Windows Vista only technology that uses an external screen on the laptop lid to let you gain access to your email, music and other content, without having to turn on your machine.


If the notebook itself looks familiar at all, that’s because it is. Asus has essentially just shoehorned the Visa Sideshow screen into the lid of an W5F – creating the W5Fe. 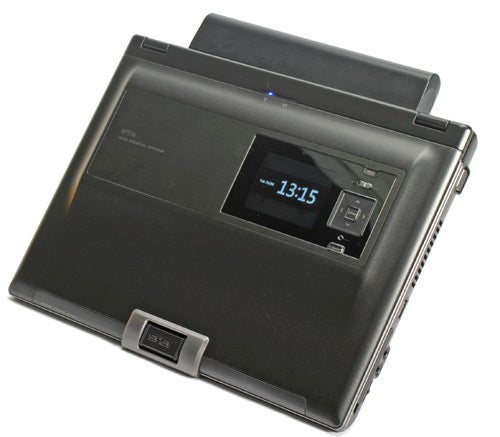 Even so, there’s certainly no denying that the Sideshow screen in a very eye catching feature, and when road testing the W5Fe on my recent trip to China for IDF, it drew quite a few comments. But how useful is Sideshow in practice?


The Sideshow feature operates from 1GB of NAND flash built into the notebook. Vista features Sideshow Gadgets; applications that are designed to make themselves available to the Sideshow screen. Only two are built into Windows Vista by default – email via Windows Mail and music via Windows Media Player. More Gadgets can be downloaded and installed via a Microsoft web page – the link is right there inside Control Panel. 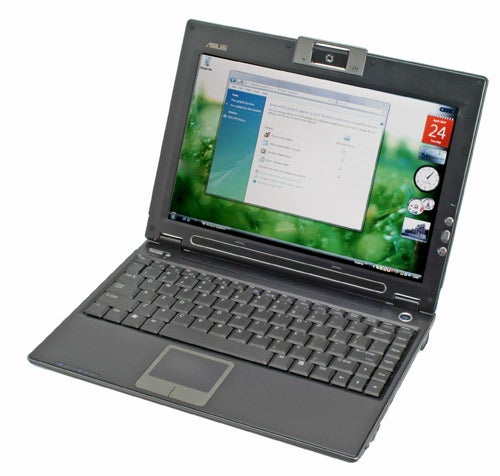 However, before I set of on my recent trip to China I installed Office 2007. As I expected Office installed a Calendar Sideshow gadget but I was amazed to discover that there wasn’t a Gadget for Outlook email. Even more surprising was that it wasn’t available on the web site either. Accessing emails would seem to me the number one use for the Sideshow screen and the lack of an Outlook gadget rendered the whole thing rather pointless for me.


However, if you are happy using Windows Mail, then the sideshow feature is quite cool. The 2.8in 320 x 240 display sits inside a larger reflective area that’s quite eye catching. Naturally the screen is a drain on battery power, so it can be switched off via a slider switch. However, Sideshow is optimised for a low power draw and the screen goes into a sleep state when not used so you won’t get penalised too heavily for leaving it on. Navigation is straightforward – there’s a Menu button at the top, a Back button at the bottom and Enter button for making selections surrounded by a four-way directional panel. 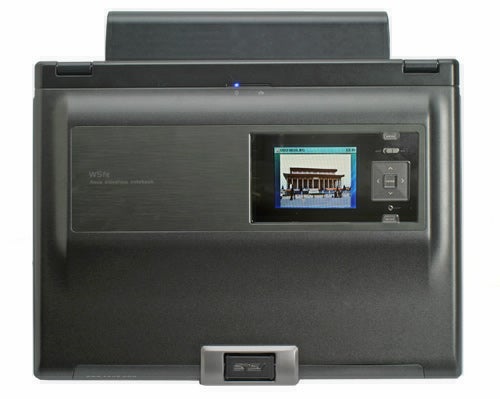 The icons are quite cute and you move between them in a manner akin to Windows Media Center. If you are happy using Windows Mail for your email there is enough resolution for at least 12 lines of text, which is good. In the settings you can choose between themes, change the default language and adjust screen brightness. Also you can tell it how long to keep the screen on for and whether to lock the buttons and whether to require a password when it turns on. This is important if you have sensitive data on your machine. There’s little point protecting Vista with password if you leave Sideshow as a backdoor for thieves or nosy parkers.

To see what else Sideshow could do I downloaded and installed a Picture Viewer. It was only in Beta and had a tendency to disappear and was rather slow but it did work. It reported that I had a 100 pictures to view and let me view start to view them immediately. Initially, I could only view the first few, because it was still pulling the picture from the hard disk into the Sideshow memory. After that I could view the pictures at the same time as playing music using Sideshow. It was good to see that Sideshow worked independently of Vista, with only a very short pause interrupting music playback as Vista went to sleep or resumed.


You can also set Sideshow to wake your PC up from a sleep state in order to update itself, so that the latest information is available to it. Al in all it easy to just view Sideshow as a bit of a gimmick as I’d be pushing to too far to suggest that’s it’s a must have feature, especially while there’s no Sideshow gadget for Outlook email. Even so it’s certainly a nice feature to have though it’s up to you if it’s enough to sway you into purchasing this notebook. 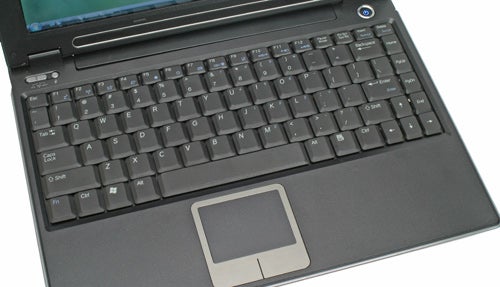 As I said earlier, this notebook is simply a Sideshow equipped version of the W5F. A year ago I was quite impressed with the W5Fs combination of power and portability but things have moved on. I can’t fault the 1.6Kg weight – while it’s not ultra-portable territory, it’s certainly light enough to put into a shoulder bag and carry round with you, without giving yourself a hernia – so it’s a thumbs up in that regard. The extra size over the real tiddlers means that it can pack a powerful Core 2 Duo T7400 CPU. This runs at 2.16GHz, which as our PC Mark 2005 scores proves is quite a bit more powerful that the Core Duo CPU supplied in last year’s machine. Equally the 512MB we were given last year would have been a bit of a joke running Vista, which is why this machine has 1.5GBs of RAM. However, this is actually the highest configuration possible – a legacy of using the W5F chassis. It’s enough for running Vista but only just, and there was a lot of hard disk activity evident under prolonged use.

The hard disk is a generous 160GB, and on the left hand side there’s a dual-layer DVD burner built in too. Squeezed in above this is an SD card and you‘ll also find a modem and 100Mbps Ethernet socket and a mini Firewire port. On the right hand edge you’ll find an Express card slot and headphone and microphone sockets. The volume control is a actual rocker switch, which is great.


There are a good number of features on the notebook, such as shortcuts for the webcam on right hand side of the screen, a proper circular volume switch on the right hand edge and a VGA out. However, there are several of negatives – the bezel is huge, even accounting for the webcam at the top and it really spoils the look of the display. Even more disappointing though are the viewing angles on the screen. Colour shift is huge, especially noticeable when booting Windows Vista, with the graphic changing colour completely. That said under normal lighting condition the screen is fine when viewed directly on. 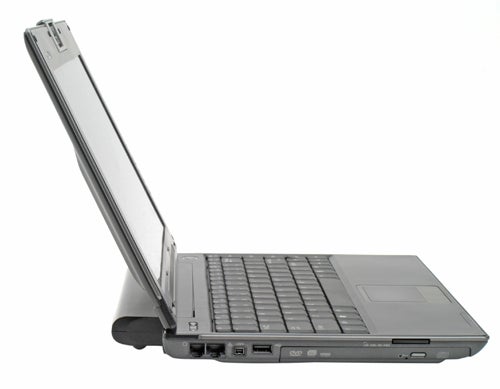 I did have a few issues when using the notebook due to it being an engineering sample such as the webcam locking up and the USB ports temporarily stopping working but I’m assured that these issues are sorted out for production units.

Useful shortcut keys include the switch to turn the wireless on and off and next to this a button that switches between the Asus power saving modes – Game, Quiet Office, Battery Saving and High Performance, each of which adjusts screen brightness and CPU speed. I found that the notebook chucked a fair amount of heat out of the CPU exhaust when in High Performance mode, so I left in on Quiet Office most of the time. There are also controls for the webcam and microphone running down the right hand side of the notebook.

To get all of these widgets working you need to have the right software installed. Hopefully this will be done when you buy the notebook, but I had to install them manually on the review sample. This leads me to complain about the Asus web site – downloading from it is painfully slow, with even the smallest utilities taking too long to come down. Asus really needs to drag its support site into the 21st century and upgrade its backbone as customers are really not getting the online service they deserve.


On the upside, the keyboard is good to type on for a notebook this size, though there was another downer when the ‘End’ key suddenly fell off for no apparent reason!

In terms of battery life we are not yet able to run a test such as MobileMark as it does not yet support Vista. (Come on Bapco, pull your finger out!) However, I did use both the standard and the extended battery. The former was unfortunately suffered from engineeringsampleitus and I was barely able eek out even an hour and a half from it. By contrast, the extended battery was taken from a production model and was impressive – easily staying the course for fours solid hours. Combined with battery saving mode this battery means that notebook was actually useful as a tool for working, though the weight increased from the standard 1.6Kg to just over 2Kg, a price certainly worth paying for the increased productivity.


Windows Sideshow is a interesting feature, but as yet hardly essential. Aside from that though, anyone that buys a notebook today is missing a trick, as the marvellous sounding Santa Rosa platform is imminent. The W5Fe can be viewed as an interesting technology introduction but I’m looking forward to seeing a Santa Rosa notebook designed from the ground up with Vista and Sideshow in mind.