So does all that bulk and all those aerials deliver excellent performance? Thankfully, it does – but with some caveats.

Starting with the first 5GHz band, this router proved to be the fastest I’ve tested yet, delivering 82.7MB/sec in our 1m test between the router and a PC equipped with the Asus PCE-AC68 Wi-Fi receiver. The Netgear Nighthawk X4 also hits over 80MB/sec but all other routers I’ve tested are around 70MB/sec or less.

This trend continues at my 5m range test, where there are two brick walls between the router and PC. Here the RT-AC5300 hit 45MB/sec, which compares to around 30-35MB/sec for most competitors. The closest alternative is the ASRock G10, which manages 39MB/sec. 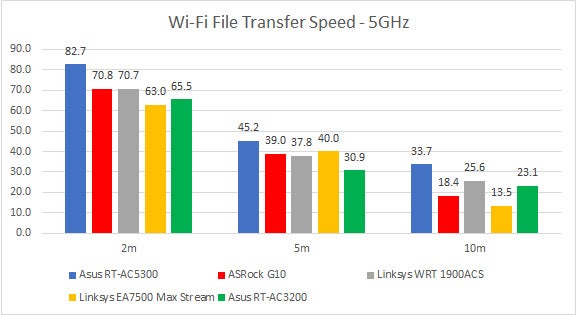 Unfortunately, this stellar performance didn’t carry over to the second 5GHz channel. Try as I might, I couldn’t get it to connect at above 20MB/sec. I attempted using a different USB-based Wi-Fi receiver but received the same result, suggesting a fault of the router, or at least the fault of a setting on the router. Nothing I tried improved matters – not even swapping round all the aerials. Further investigation will be required to determine what is going on here. 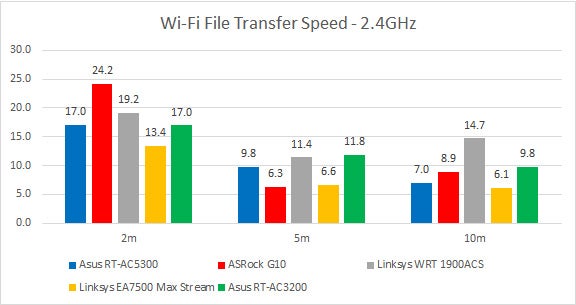 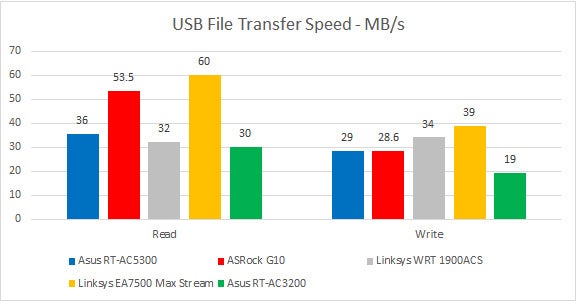 When it comes to USB performance, the Asus RT-AC5300 again fails to blow away the competition. Disappointingly, it comes mid-table for both read and write speeds to the attached USB 3.0 hard drive. 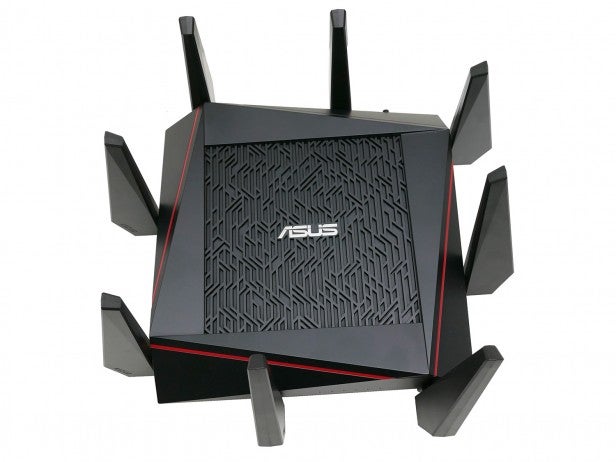 It’s clear that the RT-AC5300 is a genuine powerhouse, which is there or thereabouts when it comes to claiming to be the fastest router you can buy. However, it isn’t that clear a lead and there are a few areas where I’d have expected more for the money Asus is charging.

In particular, the use of only four Ethernet ports on a router that’s near twice the price of most alternatives seems miserly, especially when Asus’ own dual-band RT-AC88U offers eight ports and also boasts NitroQAM technology.

As ever, there will be some for whom the absolute best is required – but those may be better off looking into some truly professional-level solutions, or using multiple access points instead of one mammoth router.

For typical households, the RT-AC5300 is overkill. There are simply too many alternatives that come close in terms of performance and features and cost literally half the price.

In particular, when it comes to tri-band routers, the D-Link DIR-890L offers close to the same performance for £260. Or, if you’re wanting something that’s geared towards the enthusiast then the dual-band Linksys WRT1900ACS is a better bet, thanks to great overall performance and OpenWRT compatibility – plus it costs only £170. Finally, there’s the Asus RT-AC87U. Although I haven’t yet tested this router, it reportedly offers the same NitroQAM speed but in a dual-band design and with eight Ethernet ports, again for around £300.

The Asus RT-AC5300 is arguably the the fastest router you can buy right now. But it isn’t twice as good as the competition, which is disappointing given that it’s twice the price.