What is the Linksys WRT1900ACS?

The WRT1900ACS is the updated version of Linksys’ flagship router of 2015, the WRT1900AC. It packs in a faster processor and double the RAM of its predecessor, which should result in faster overall performance – particularly in more demanding multi-user scenarios.

Otherwise, it’s a similar beast to before, capable of up to 1900AC Wi-Fi speeds with its dual-band, four-aerial setup. It also has four Gigabit Ethernet ports, a USB 3.0 port and a combi eSATA/USB 2.0 port for sharing files or printers.

In addition, it continues to supports the open-source router firmware OpenWRT, making it potentially ideal for those users who want to fine-tune their network.

The WRT1900ACS uses an identical external design to its predecessor, with it sporting a practical chunky look whose only embellishment is the blue plastic of its front third. It’s a sizeable unit, measuring 295 x 205 x 123mm and weighing 886g, so combined with its striking livery it may not be to everyone’s taste.

Nonetheless, in contrast to the shiny, angular and upright ASRock G10, this router sits flat and firm on its four rubber-bottomed feet. It instantly gives the impression of kit that’s been designed to stand the test of time.

As well as sitting flat it can be wall-mounted: the four removable external aerials can be moved to best optimise positioning and signal strength. 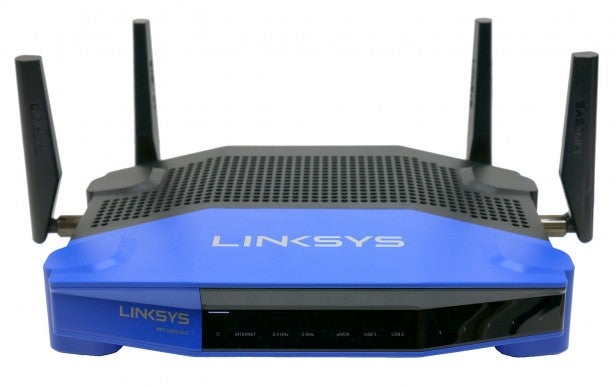 The unit can also be stacked, with a matching eight-port switch sporting the same design ready to sit beneath the WRT1900ACS.

Gone is the fan of the original, however. Some users welcomed the feature as a handy back-up if cooling became an issue; others saw it as just another point of potential failure though. It’s likely that the new chip used here brings with it some power saving features, so Linksys has felt it safe to remove the fan.

The power supply has changed, too, switching from an inline model to one integrated into the plug. I tend to prefer the latter just because it makes cable management easier, although I can see that some users will prefer the inline style since it doesn’t take up as much room at the socket.

All the connectivity is situated round the back of the device, where you have the four Gigabit Ethernet ports as well as a fifth for connecting up to your modem. These are joined by the USB 3.0 and eSATA/USB 2.0 ports, WPS button, power socket and switch and the Reset button.

That’s a decent selection, although whether a second USB 3.0 port would be more useful than the eSATA/USB 2.0 combo is up for debate.

Similarly, for some users a side- or front-mounted USB port would have been more convenient since it makes it easier to plug in and remove devices. Likewise, the WPS button – for adding new devices to your network with one touch – would be far better located on the front on the router. 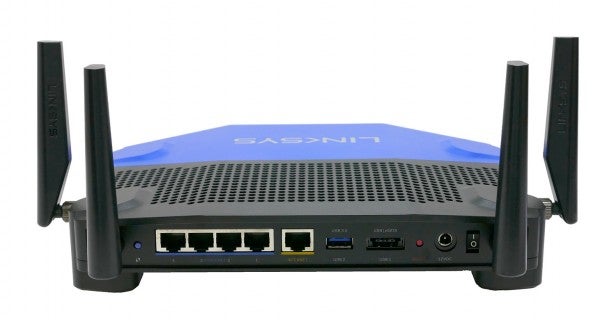 On the plus side, the display on the front of the WRT1900ACS is excellent, with each light accompanied by a symbol representing the feature it corresponds to – unlike the Netgear R7500. Also the lights line up with their corresponding connections and buttons round the rear of the device, so you know exactly where you need to plug something new in or hit that WPS button.

The latter is important considering this router is for use with the popular open-source router network firmware OpenWRT, custom versions of which may be relatively large. 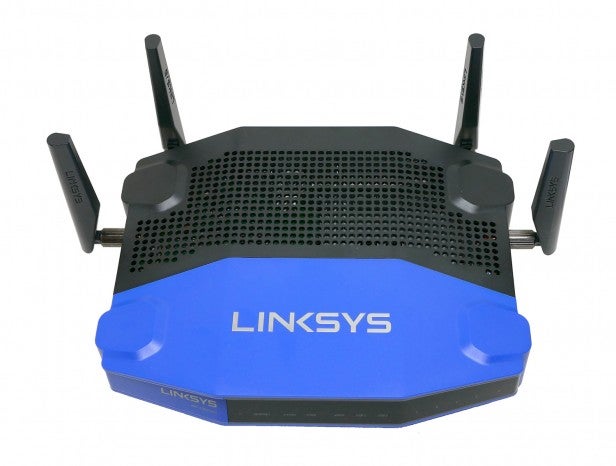 On the Wi-Fi front, the router displays the same AC1900 capabilities as before. It’s possible to simultaneously achieve up to 600Mbps using the 2.4GHz band or up to 1,300Mbps over 5GHz. You do miss out on the latest must-have feature, though, which is Multi-user-Multiple Input Multiple Output (MU-MIMO). This is a standard feature of the latest AC Wi-Fi standard, but it’s currently only implemented in a limited number of routers.

The chief benefit of MU-MIMO is that the router is even better able to cope with multiple devices connecting to it at the same time, although maximum throughput to any one device is no better.

For configuring the WRT1900ACS you can download Linksys’ Smart Wi-Fi app, which allows you to monitor network activity and speed, turn off/on Wi-Fi access, create a guest network and prioritise network traffic.

Using Linksys’ Smart Wi-Fi service you can even access your router from anywhere round the world, which is convenient if you’re sharing files using those USB ports.