If you’ve ever wondered whether AC1900 routers are worth it, prepare to have your horizons broadened.

The RT-AC5300 is Asus’ flagship router and it costs nearly £400. For that you get the absolute latest in Wi-Fi technology, with NitroQAM for incredibly fast single-user throughput, alongside MU-MIMO technology and two 5GHz bands for fast multi-user performance. There’s also the option of link aggregation using the Ethernet ports, allowing for up to 2Gbps throughput.

Does it all add up to the best router you can buy? Perhaps, more importantly, does it offer good value?

First impressions of the RT-AC5300 actually come via its box, which presents the router with all the pomp you’d expect given its price. Removing each layer of cardboard protection exposes the various parts of the router, including the perfectly aligned and individually cradled aerials – all eight of them.

Put them together and you have a monster of a router. Without aerials it measures 245 x 245 x 65mm; with them it stretches to over 30cm square and 17cm tall. Combined, the package weighs in at over 1.7kg – making it by far the heftiest consumer-grade router you can buy. 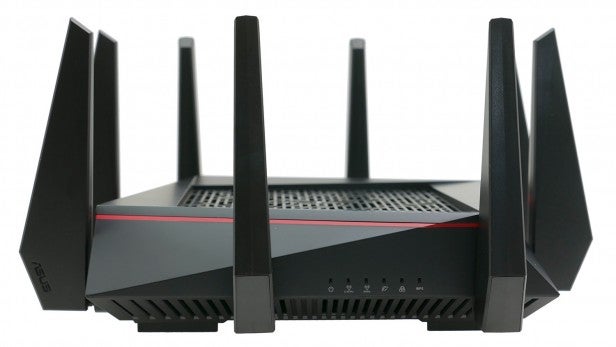 As you’d expect, this heft is reflected in rock-solid build quality, although – like the Asus RT-AC3200 – the aerials are a touch more prone to falling over than some of the best examples I’ve seen. However, you can flip them round so that the router stands on top of the aerials, with the resulting unit appearing like some sort of mechanical spider if you’re into that sort of thing.

It’s a touch disappointing, then, to discover that there are only four Gigabit Ethernet ports on this machine. For such a large unit – and for that colossal price – I’d expect at least a few more, especially given that the Asus dual-band RT-AC88U packs in eight.

In a similar vein, having only one USB 3.0 port seems a little miserly, even if the chances of anyone needing more than one is slim. Instead, you get another USB 2.0 port.

An improvement over the RT-AC3200 is that the USB 3.0 port here is situated on the rear, which makes for a far tidier setup if using a USB hard drive permanently attached to share your files. The other USB is on the left side of the device, where it’s joined by buttons for WPS, turning the status LEDs on and off and turning the Wi-Fi on and off. 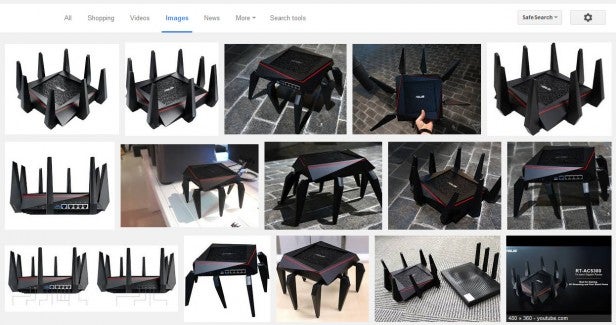 The fun to be had with a router with eight aerials

A selection of status LEDs sit at the front. They’re surprisingly small, but serve their purpose and have reasonably easy-to-see logos that indicate which is which.

Again, considering the price of this router, it would’ve been useful for the router to include lights on the front to indicate the status of the Ethernet ports too. Indeed, you don’t even get lights on the ports themselves, so peering round the back of the device will do you no good either.

As such, it really is the case that the main event here is the Wi-Fi hardware.

You get three separate Wi-Fi bands: one 2.4GHz band for legacy hardware and two 5GHz bands for newer devices. In theory, having two 5GHz bands should make for greater throughput when many devices are connected simultaneously since it essentially splits the load. 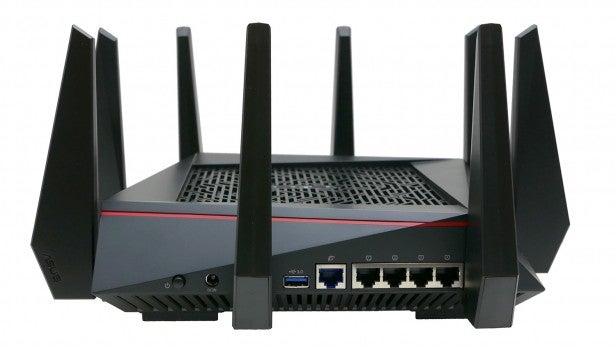 What’s more, this router supports the latest MU-MIMO technology for even better handling of multiple users on any given band.

Then there’s also 1024-QAM (Quadrature amplitude modulation), or NitroQAM as Asus calls it. Essentially, this is an extension of the 256-QAM technology that’s standard in 802.11ac Wi-Fi, and its aim is to increase data rates for the same frequency

However, while the move from 256-QAM to 1024-QAM may sound like a huge leap, the resulting potential performance boost is actually only 25%. Nonetheless, it means that the maximum Wi-Fi bandwidth of this router should be among the best we’ve ever seen.

Powering it all are a couple of Broadcomm BCM43465 chips, which each handle four of the antennae as well as the 1024-QAM technology that gives this router such awesome speed. What’s more, you’re getting that speed on all three bands that this router offers.

Just like the Asus RT-AC3200, the AC5300 has a very comprehensive setup routine that guides you through whether you’d like to use the router as a router, or just an access point or wireless bridge. You can also choose what sort of internet connection you have and even select to connect to the internet via a USB 3G/4G dongle.

As a result, the setup routine is rather more long-winded than most alternatives where setup is automatic and you’re simply asked to set a new router and Wi-Fi password, and perhaps set up an account with their cloud service. As such, I’d definitely say this router isn’t for amateurs or those who want an easy ride – hardly a surprise given its price. 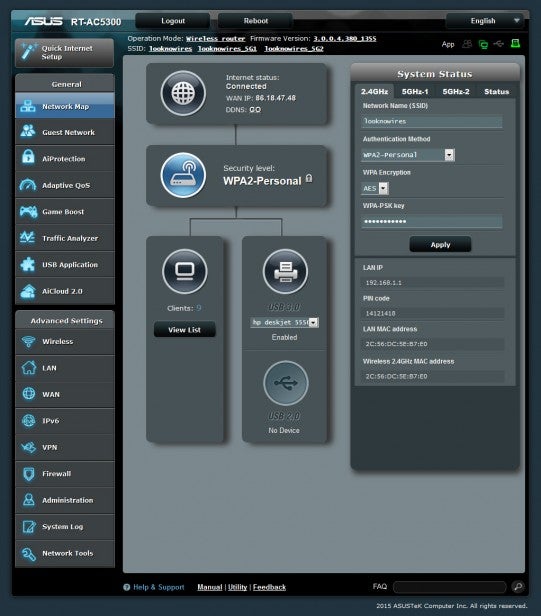 The OSD is incredibly feature-rich, offering all the usual network quality, firewall and traffic-monitoring options you’d expect, along with a few unique extras.

As well as setting up USB devices as 3G dongles, you can also use them to turn storage devices into media servers (not just a shared drive but an actual server), with support for iTunes server and DLNA. You can also set up Apple Time Machine and even share your files via the Asus AiDisk cloud service.

Establishing some of these services is a little clunkier than I’d like, however. By default the USB file-sharing doesn’t just share to anyone on the network, but instead requires you to enter a password. Printer sharing, meanwhile, is achieved via an app that doesn’t allow you to connect to two printers at once and generally offers no controls whatsoever – you just click and hope for the best.

Likewise, Asus’ AiCloud and AiDisk services just aren’t as slick as those from more established networking brands such as D-Link, Linksys and Netgear.

Despite these extra complications, the RT-AC5300 isn’t actually open to tinkering in the way of Linksys’ WRT range, where users can load up with the open-source OpenWRT firmware.