Astral Chain is one of PlatinumGames' finest acts this generation, cementing itself as yet another stellar exclusive for Nintendo Switch. It doesn't reach the heights of excellence achieved by Yoko Taro's NieR: Automata, but can more than hold its own thanks to an excellent setting, experimental combat and so, so much style it hurts.

PlatinumGames has a pedigree that few studios do, having amassed a library of modern classics including Bayonetta, NieR: Automata and the fiendishly underrated Vanquish. The Japanese studio has made some absolute bangers, but has also produced some mediocre licensed work that makes every new venture an unusual gamble.

Astral Chain is one such roll of the dice, crashing onto the Nintendo Switch in a flurry of anime-infused neon lights that left an impression so striking it gave me whiplash. This is a seriously stylish action outing that draws from the well of Akira, Neon Genesis Evangelion and countless other iconic sources to create a truly impressive entry in Platinum’s catalogue.

Yes, this is Platinum firing on all cylinders, even if some bullets coming Astral Chain’s experimental arsenal don’t quite land as intended. A few blemishes aside, what we have here is yet another fantastic exclusive for Nintendo Switch owners, cementing the system as something you simply need to own. 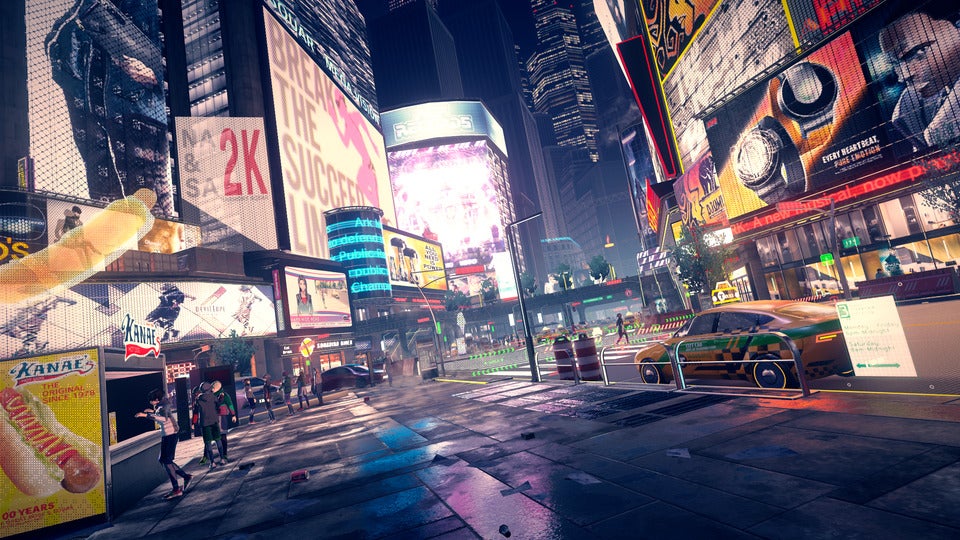 The world of Astral Chain is colourful, stylish and the best kind of anime futurism

Astral Chain takes place in 2078, in a world where humanity sits on the brink of extinction due to interdimensional creatures known as Chimeras tearing civilisation apart piece by piece. This has forced the last few segments of humanity into The Ark, a sprawling megacity designed to keep such threats at bay.

This plan of action doesn’t work out exactly as planned – Chimeras have infiltrated the city, dragging civilians into an ethereal world known as the “Astral Plane” from where there is seemingly no escape. That is, until I come along. As a member of Neuron Police Task Force, I’m part of an elite group of trained professionals tasked with ridding the world of Chimeras by any means necessary.

This is achieved by taking control of Legions, submissive Chimeras who are psychically linked to an officer through the use of an Astral Chain. They’re essentially pets, used throughout the campaign as tools of combat and investigation – the two mechanical pillars that help define what this adventure is all about. You’ll unlock several Legions throughout Astral Chain, venturing into another dimension to recruit them for the cause. 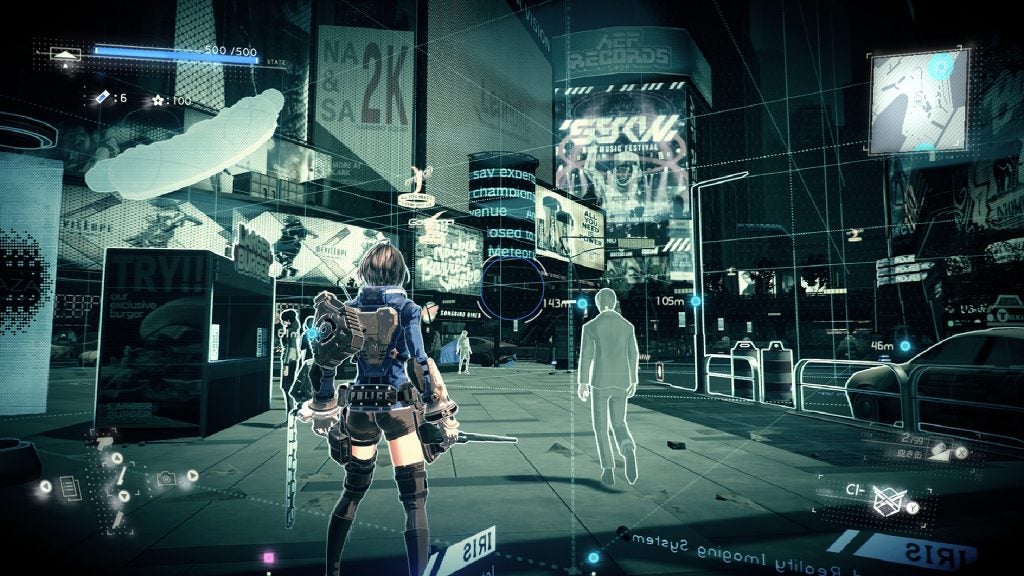 The campaign begins with a wonderfully absurd motorcycle chase. Sat aboard a neon-encrusted ride, I dodged oncoming traffic and endless explosions while unknown assailants rushed toward me, falling apart in seconds as my futuristic pistol tore through them. While on-rails to an extreme degree, this section set the tone for Astral Chain almost perfectly.

This is a colourful, bombastic adventure that finds a clever balance between melodramatic storytelling and a sense of style so prominent that it almost oozes out of the screen.

Once this exhilarating introduction is behind us, the true core of Astral Chain begins to make itself known. This isn’t just your run-of-the-mill action experience, it’s a hybrid that prioritises exploring its world and solving puzzles as much as caning evil anime ghosts with your cop dad.

Many missions begin in the midst of The Ark, walking among its populace to gather valuable information in solving investigations. I adored this aspect of Astral Chain, losing myself in a world that revealed itself the more I poked and prodded. You can choose between a male or female lead, providing enough room to craft an avatar that represented me.

Granted, it’s drenched in well-worned archetypes and obnoxious bright colours, but the personalities within it are charmingly unpredictable, hurling you into side-quests that involve finding lost cats or investigating a haunted dumpster. I even had someone attack me, confusing a suspect I was searching for with their favourite popstar. I swiftly taught them a lesson, ensuring that no-one else messes with me.

Investigations, which form the backbone of most missions before the story really takes a turn to the intensely absurd, are performed with the use of IRIS. This tool allowed me to transform the world around me into an interactive crime scene, replaying past events to uncover exactly what happened down to the smallest detail. It’s genuinely rewarding to piece together the narrative of a crime, whether I’m searching for a missing person or a giant monster on a rampage. You’d think the second one would be easy to spot. 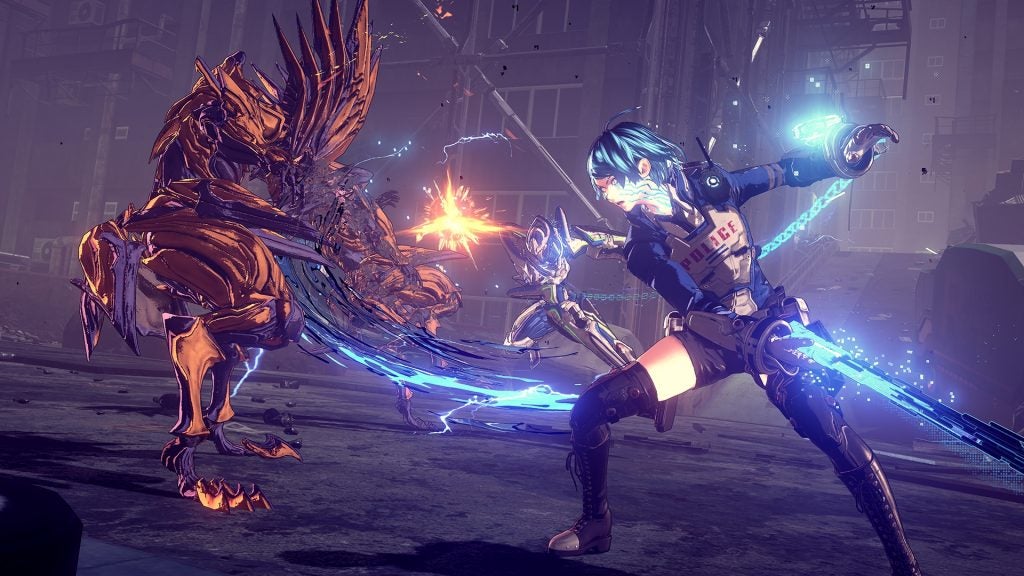 Combat is fast, thrilling and strategic – exactly what you’d expect from PlatinumGames

Investigations inevitably result in a round of fisticuffs with the local Chimeras or an unanticipated trip to the Astral Plane, another area where Astral Chain’s ambitious nature really comes alive. The combat system takes the fast, rhythmic pace of Bayonetta and NieR: Automata and puts a welcome spin on proceedings. The presence of Legions changes the game completely, as I was controlling two beings at once across the battlefield. As I mentioned before, each respective legion is attached to the player with a chain, which itself can be used to trap foes by drawing circles around them, or tripping them up with a well-placed flick of the wrist.

These aren’t just fancy tricks either, and are often used in boss battles to hold adversaries down for a handful of critical hits. Once you get the hang of such skills, they become immensely satisfying to execute, although some of the animations can grow repetitive overtime as you “finish off” baddies with the same tired movements. However, they move so quickly that this rarely became a dealbreaker; I just wish Astral Chain was a tiny bit smoother in some areas. Legions range from blade-wielders to bow firers to canines that literally run circles around enemies, meaning the level of variety only grows greater the further I progressed into the campaign.

Legions can be customised with distinct skills and aesthetic flair in-between missions, allowing players to put their own mark on everything about their player character. Accessed back at Police HQ, the level of customisation is impressive, with different colour schemes, outfits and other goodies unlocked by exploring the world itself. I was constantly rewarded for roaming out of my comfort zone, whether I was climbing across rooftops or duking it out with beings far above my skillset. Oh, and did I mention you can rescue cats and take selfies with them? Because that’s a thing, and it’s amazing. 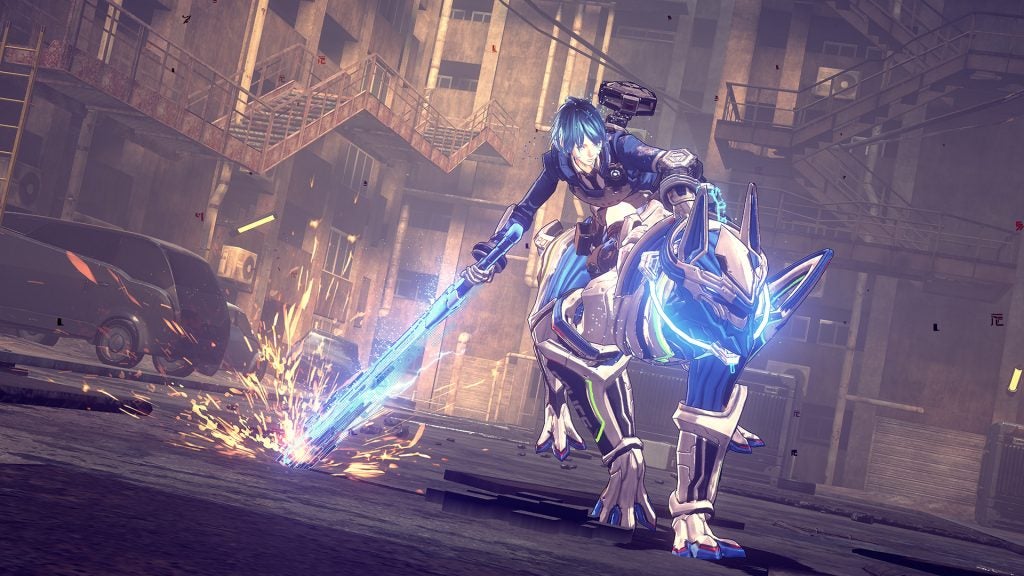 Riding this adorable fellow across the battlefield is undeniably rad

One of my personal highlights was simply exploring the world at my own base, Police HQ being a particularly hive of curious conversations and lovable characters. After each and every mission I’d try to return, checking in with people who’d become my friends after several hours of trying to save the world.

As is typical anime fashion, those with rainbow hair colours and a silly sense of fashion are the ones you’ll want to keep an eye on. They cared about me, and the feeling was mutual as the central mystery of Astral Chain began to unravel itself. If you want more information on a particular person, snap a picture of them and an entry will appear on your computer compiling everything there is to know.

Helmed by some of the minds behind NieR: Automata, you won’t be surprised to hear that the story goes to some wonderfully absurd places. I won’t spoil anything here, but this is far more than your usual yarn of melodramatic anime nonsense.

One major flaw is how Astral Chain performs while docked. It’s choppy, with inconsistent performance and frame pacing that feels fundamentally at odds with the fast-paced combat. As a result of this I opted for portable play when I could, so fingers crossed things are addressed with a patch going forward.

Astral Chain is one of PlatinumGames’ finest acts this generation, cementing itself as yet another stellar exclusive for Nintendo Switch. It doesn’t reach the heights of excellence achieved by Yoko Taro’s NieR: Automata, but can more than hold its own thanks to an excellent setting, experimental combat and so much style it hurts.