From a purely action standpoint, NieR: Automata puts many open-world ARPGs to shame. For the past few years, Japanese role-playing games have been shifting away from turn-based battles to something more immediate, with From Software’s Dark Souls series being the only one to truly nail it thus far. Until now, that is. Platinum Games is known for making exhilarating action games with deep, at times unforgiving combat mechanics. NieR: Automata manages to capture this while also simplifying it for audience accustomed to ordinary ARPGs.

It really works. Automata’s combat is immediately gratifying – anyone can pick it up and deliver impressive combos with a couple of button taps. Heavy attacks, light attacks, jumps, dodges, and projectiles are all you need to think about. The brilliant animations really sell each hit, too, with a slight pause in the action mirroring a physical connection with each clang of metal. A tap of R2 sees you gracefully cartwheel out of the way of incoming attacks, priming a counter-attack if timed perfectly, slowing the action to a crawl much like Witch Time from Platinum’s own Bayonetta.

That’s the core of NieR: Automata – super-satisfying combat against cute robots who need to die. Layered over the top of this are RPG mechanics: levelling up, upgrading equipment, and looting enemies and chests for gear. It might sound like you’ve been here before but, trust me, you haven’t played a game quite like this. That’s because development was headed up by eccentric game designer Yoko Taro, a man who’s well known among a certain niche for his distinct personal touch. 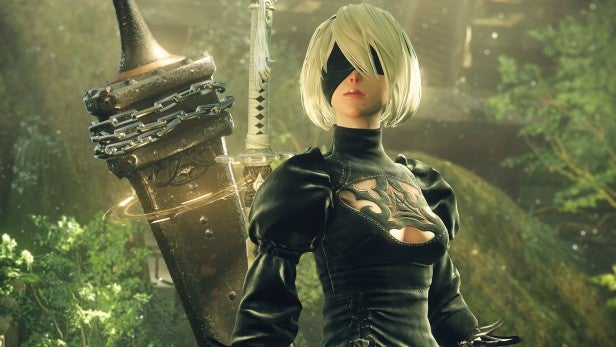 As you might already know, Yoko Taro already made a game called NieR, but Platinum wasn’t on-hand to make that game’s combat sing. Still, it’s something of a cult classic. If you were worried about going into Automata having not played that, though, don’t worry – beyond the odd wink and nod, you won’t be missing any of the bigger picture. Automata is set in the same universe as NieR, but it’s so far in the future that the events of that game don’t matter anymore.

Automata takes place long after an alien invasion forced the last remnants of humanity to seek refuge on the moon. The aliens created machines to churn through our populace, so the last vestiges of our species are clinging on to the rock orbiting the sapphire orb we once called home. In a hope to win it back, we created YoRHa, an elite android unit that conducts guerrilla strikes on the planet’s surface, attacking the machines on Earth in flight units – transforming mecha launched from orbital stations.

The game begins with you in control of one of these units. Before I even set foot on terra firma, I shoot robots out of the sky while flying up a screen on a 2D plane, transform into a mech and let loose in a twin-stick shooter, control my flight unit from behind as it weaves through the skeleton of an industrial complex, and navigate the building’s interior as a side-on shmup. It’s a strange mix, but it’s one that works, even if the shifting camera angles don’t always hit home, particularly in standard combat scenes.

Automata is a busy game. As combat android 2B, you’re accompanied through most of the game by 9S, a recon specialist android who fights alongside you. You both also have pods – essentially drones which fly nearby and fire at your command. Sometimes the screen is filled with enemies, too. Some combat sequences see the camera switch from free movement to a fixed position, either like a side-scroller or a top-down angle, giving you a bird’s-eye view of the battle. The thing is, it makes it damn difficult to pick yourself out in some of the busier fights. It’s style over readability. 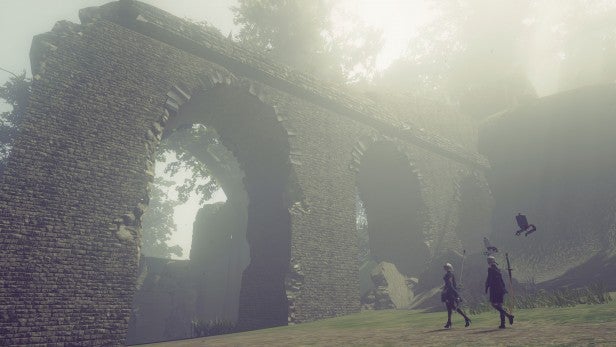 Luckily, Automata is a forgiving game. So long as you stock up on potions when you can, you’re always just two buttons away from replenishing your health bar. There’s not really any reason why you wouldn’t run around with 99 potions all the time, just in case. Playing on Normal, I died around three times in my two playthroughs of the game, clocking in at around 30 hours. You wouldn’t know it was easy, though, what with all the dead androids scattered around. When other players die, their corpses appear in your world, you see. You can pray to their body for a health boost, you can resurrect them to fight alongside you – and now fights are even busier – or you can take on some random properties from their chipset.

Chipsets are pure genius. You’re an android, right? So, you level up by messing about with computer chips. You can plug in loads of speed chips to make yourself run fast, plug in chips to auto-heal when you’re close to death, bump up your attack, create shockwaves with each swing, and loads more. You can also buy new slots to boost yourself further. You start the game with a bunch of chips plugged in. They’re your ‘essential’ chips, for HUD elements and the like. If you don’t feel they’re so essential, you can sacrifice things like being able to see the enemy’s health bar and level if you really want more power. Just don’t unplug your central processing chip because, well, you’ll die.

It’s full of quirky little ideas like this, and you’ll find clever, touching, and bizarre moments throughout. I won’t spoil them for you, as they would have much less impact. Just make sure you rub your DualShock 4 touchpad gently, OK?

One of the game’s running jokes is the map, displayed as a basic satellite image. A couple of NPCs offer tutorial-style advice and you can complain about the map being terrible to them. Automata is happy to take the piss out of itself. Unfortunately, that doesn’t mean the map isn’t pants. Likewise, the areas you explore can be a bit inconsistent, with invisible walls barring progress in places you should feasibly fit through. 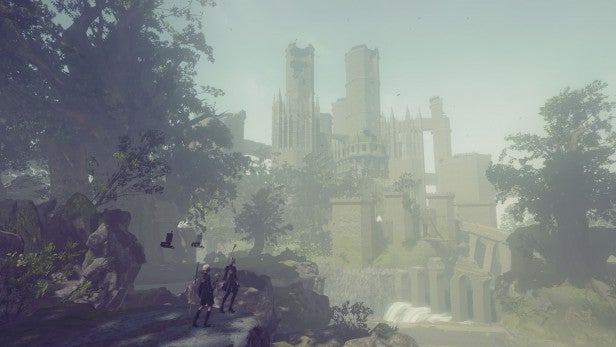 It’s a bit annoying when you’re trying to track down objects and characters in one of the many sidequests. Fortunately, though, like the combat, just moving around this world feels amazing. Just as a tap of R2 triggers a cartwheel, and it’s also a dash. Keep holding it and you begin to sprint, with your character building up momentum as you go. Marry this to a double jump, a glide, and mid-air dashes, and you’ve got a heady mix for some impromptu parkour. Now deck yourself out with as many speed chips as you can fit in your OS. Go!

It feels good to go fast, right? Automata, however, is best savoured, completing all the sidequests and searching every corner. It’s a game that never really finishes. If you speed through the game and concentrate on the main quests only, putting it down once the credits roll, you will be disappointed. The ending doesn’t quite live up to what you’ve built up in your mind. But that’s because you’re not done. This is a game designed to be played over again and again. Your second playthrough is entirely different from your first. Though many of them are jokey skits, Automata has an ending for every letter of the alphabet.

Despite some minor annoyances, NieR: Automata is brilliant. It strikes the balance between RPG and action game unlike anything else in the genre. It’s a game you kind of have to meet halfway, with a story that gets more complex and interesting the more you prod at it. If you’re willing to commit, though, you’ll be rewarded.