There’s no doubt that the iMac is a pretty, pretty thing. Indeed for us, it’s the Natalie Portman of computers (high praise indeed – Ed); beautiful, stylish and intelligent, and the all-in-one desktop computer by which all others are judged. Back in November 2009, Apple introduced the upsized 27in version, and it’s fair to say we fell in love all over again. What’s particularly special about the 27in iMac is not just its size though; it’s that it makes full use of its generous screen area with a mightily impressive 2,560 x 1,440 resolution, a sizable 60 per cent more pixels than the 24in, 1,920 x 1,200 iMac. 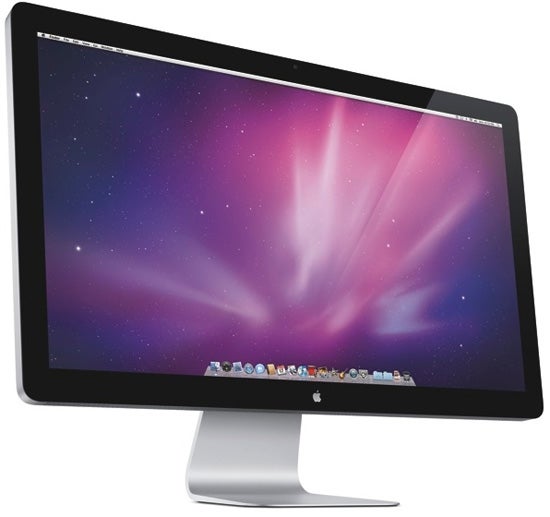 However, if you already have a portable Mac or a Mac Mini and want to hook it up to a display of this resolution, do you really want to compromise the aesthetics of your Mac by using a standard PC style monitor from the likes of Dell? Perish the thought. Naturally, Apple has just the solution in the guise of the 27in Cinema Display. It’s the same panel as that of the 27in iMac, only without the computer inside it. Naturally, all this extra space does not come cheap – and the LED Cinema Display currently costs £835 – a sizable chunk of change for anyone.


It’s not a completely outrageous price, but to compare to its most popular competitor, Dell’s CCFL-backlit UltraSharp U2711 (which is equivalent in terms of size, resolution and panel technology, if not backlighting), can currently be had for £699.99 and offers a lot more features and connectivity into the bargain. 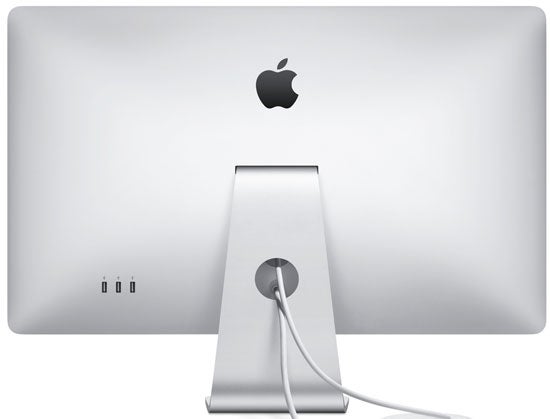 Apple used to offer a 30in Cinema Display, which offered even more pixels (2,560 x 1,600 of them, to be exact), but the 27in seems like a fair compromise in terms of resolution, while its smaller size makes it more manageable on a desk. It also has the advantage of featuring an edge-lit LED backlight, which enables it to be thinner and use less electricity, though colour accuracy takes a minor hit.


Having sat in front of this display for a couple of days, it seems churlish to complain of only having 1,440 vertical pixels to play with. In fact, it makes working with longer documents and web pages a joy.

Design-wise, Apple’s latest Cinema Display is naturally very similar to the 27in iMac. It features the same luxurious aluminium frame and has a glass front that extends from edge to edge. It looks expensive, which of course, it is. The main difference is that the silver section underneath, which on the iMac contains a computer, is absent. Remarkably, the 20.7cm depth (with stand) is exactly the same as that of the 27in iMac, though that reflects more on the engineering feat the iMac represents than any qualities of the LED Cinema Display.


The Apple logo has been moved into the black bezel, which is the same size all the way round and contrasts well with the rest of the display. Naturally (this being Apple, after all) there are no unsightly buttons, with all adjustments made in the OS. The major disadvantage comes when hooking up consoles and the like, where you’re basically stuck with the monitor’s presets and no scaling. Hooking it up to a PC is also far from ideal, but more on that later. 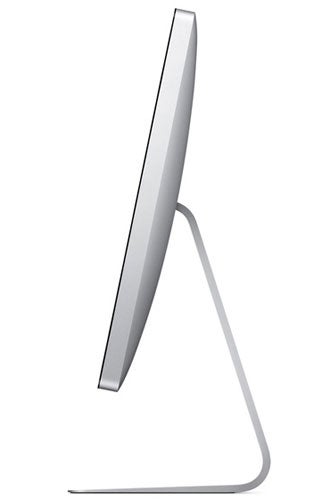 At the top of the bezel sits a webcam with a built-in microphone – or iSight, to use the preferred Apple nomenclature. If you hook up to a Mac, any decent application will let you choose whether to use the camera in the screen rather than your laptop, to avoid the person at the other end having to view you from an awkward angle.


Hidden in the base of the display are two downward-firing speakers, which Apple describes as 2.1, implying some sub-woofer style action. The specs are given as 49W, so more powerful than the 17W listed for the iMac. Volume was certainly not a problem, and there was notable bass response – though decent dedicated speakers will naturally give you even more, as well as a clearer middle and top end. However, for integrated speakers this is as good as it gets.


In terms of ports, there are three USB connectors, though these are located right round at the back, which is inconvenient if you have to frequently connect and disconnect something.


The power plug is located centrally towards the rear, is circular and is coloured the typical shade of Apple white, unlike the boring black plastic oblong of regular plugs. There’s a circular cut out in the stand for the plug, and it doubles up as a cable tidy. Beneath this there’s a tiny Kensington lock to secure the screen, which on an expensive and desirable item such as this is a sensible inclusion. 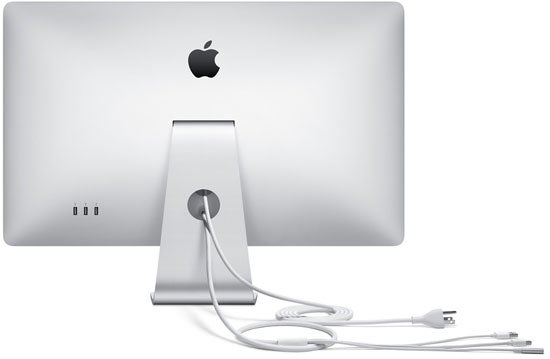 The only other feature on the rear of the monitor is the captive cable that contains a mini-Display Port plug, a USB port and a pass-through MagSafe power connector. The latter means that you can power your Macbook from the monitor, saving you having to trail another cable across your desk. If you’re using a Mac, it makes for a very neat system, but if you’ve got a machine that doesn’t have DisplayPort, then there’s no way of directly connecting to the Cinema Display. You can use a third-party adaptor, but it isn’t supported by Apple, so if you have any problems, you’re on your own.


Another issue with the Cinema Display is that, as with the iMac, there’s no height adjustment or screen rotation; you just get to tilt the screen forward and back from between -5 to 25 degrees, which is the same adjustability found on the cheapest budget monitors. Whether that’s an issue is of course, up to you, but it’s certainly something we lamented as we would have preferred it slightly higher up on our desk. What’s more, balancing a screen such as this on a book would seem to be a rather philistine thing to do.

To test the display we used a recent, DisplayPort equipped Macbook, and the first thing we noted was well, ourselves. The glossy coating on the display makes for a highly reflective surface, and our face was all too often visible – never a good thing. If you do want to use the Cinema Display with dark material such as films, you’d best dim the lights.


That aside, out of the box, image quality was excellent. Right from the off, whites were punchy, text sharp and clear yet easy on the eye, and colours vibrant. When you do tilt the screen you can be sure that there’s no colour shift either vertically or to the side – viewing angles on this H-IPS screen are no problem, at 178 degrees side-to-side. 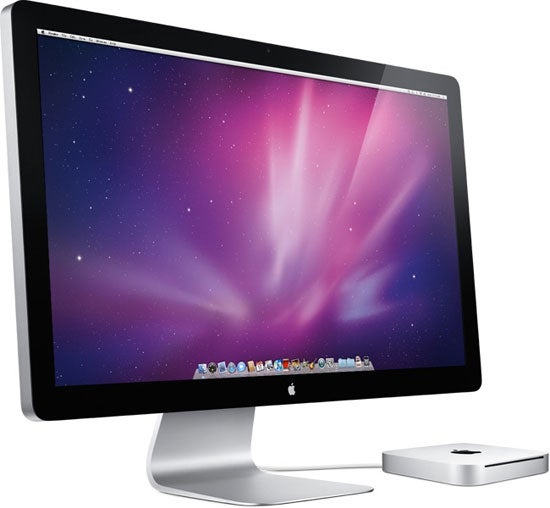 Our first move was to run through the calibration routine in Mac OS X, but we only had to make very minor adjustments to the default image. Apple’s OS instantly recognises the Cinema Display and brightness can be adjusted by a slider in Display preferences. There’s also a check box to enable a light sensor that adjusts brightness automatically according to ambient conditions.


If you were to connect up a PC, you’d be forced to use the graphics driver control panel, which won’t enable you to directly adjust the backlight. To do so you’d have to install Boot Camp 3.1 drivers on a PC, so expect some fiddling around.


Maximum brightness for the screen is listed as 375 cd/m2 and in a typically-lit office we had to reduce it down a little to work comfortably. Contrast ratio is given as 1,000:1, and we could make out all the 32 steps in the Lagom contrast test. 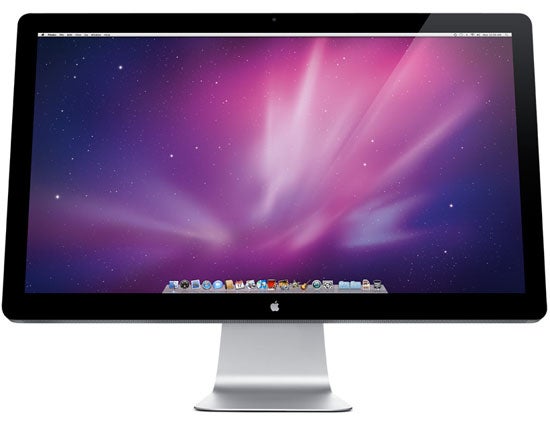 Moving to the Black-level test, we found black levels to be good, though not outstanding – we had to move to maximum brightness to see each black square, though at least they were very smooth and noiseless. Subjectively, colour uniformity was excellent and in terms of motion, we didn’t notice any overt ghosting despite the screen’s 12ms response time.


Overall, we have seen better quality, and if you’re a very demanding professional looking for the last word in image quality then this LED Cinema Display may not meet with your approval. For everyone else though, it’s an excellent display, and we’d be happy doing photographic or any other kind of work on it all day long.


The 27in LED Cinema Display offers all the aesthetics you’d expect from Apple, married to generally excellent image quality. However, reflections from the glossy screen may rule it out for some. It’s also expensive, especially compared to Dell’s equivalent U2711, which offers a whole host of additional connectivity options, far greater adjustability, internal processing, an anti-glare, matt finish and a more extensive colour space for less money. If these caveats aren’t an issue for you, Apple’s simply gorgeous aesthetics and slim metal build might be enough to win you over, though it makes most sense if you work and play in an all-Mac environment.