It’s not magic, it’s not even unique, and its appeal is niche at best, but that doesn’t mean you should dismiss the Apple Magic Trackpad offhand. We’d certainly suggest you think carefully about whether you want to spend around £60 on a device that doesn’t really add anything new to your computing experience, but that’s not to say the Magic Trackpad doesn’t have its merits.


Although it’s a relatively minor consideration, the industrial design of the Magic Trackpad definitely resides in the list of “plus” attributes. If you’re familiar with the dimensions of Apple’s aluminium keyboards, you’ll find it unsurprising that the Magic Trackpad lines up exactly with one, when placed side by side. In figures it measures 133mm x 130mm x 183mm at its highest point, dropping to just 4.6mm at its lowest.


The tube-like section of aluminium that elevates the rear of the Magic Trackpad also houses its two AA batteries. Obviously any cells will do the trick, but if you want to play the purist, Apple supplies its own charger kit that comes with six batteries – enough to have two charging while the other four power your keyboard and mouse. Obviously there are no wires – perish the thought! – so connection is over Bluetooth; as a nice but pointless touch a special TrackPad icon pops up when one is found by your Mac.


The touch-sensitive area is 130mm square and has the same aluminium-coloured glass finish as the trackpads on the MacBook Pro range. It’s more of a design understatement than something to remark upon, but it’s certainly an attractive device.


The surface area is just the right size to fit an entire hand on at once, and there’s just enough elevation at the back to put your hand at a comfortable angle when resting it. As MacBook users will know, the surface is finished such that it has a good balance between being smooth enough that frequent use isn’t irritating, while still providing enough friction that you know your gestures are registered.

The entire surface works as one large button, as we’d expect given that MacBook trackpads work the same way, with the feet at the front clicking into the trackpad when pressed down. The action not only feels satisfyingly mechanical, but also emits an almost tactile “click” noise, imparting confidence in the build quality.


Sensitivity is excellent, as long as you don’t turn the pointer movement speed up too high in the Trackpad System Preferences pane. Higher levels not only reduce accuracy, but also the amount of trackpad space that you’ll be using. For most applications where you’re not moving across large screen distances, you’ll rarely be using the full surface area of the Magic Trackpad anyway — especially with pointer acceleration enabling fine movement when required, while also letting you track across large distances quickly when you need to.

The space available becomes more useful for the plethora of multi-touch gestures that Apple provides. All the obvious actions, such as pinch-to-zoom, rotation, and three-finger ‘forward’ and ‘back’ navigation are present, but Apple has also added the Magic Trackpad-specific option to have a three-finger drag move windows around. Unfortunately to enable that you have to sacrifice navigation gestures which is a poor tradeoff – we’d rather lose the four-finger Command-Tab gesture.


We’re unsurprised, but nonetheless disappointed, by the Windows support offered by the Magic TrackPad, too. Obviously we’re not expecting quite the level of OS integration the Magic Trackpad as with OS X, but the option to at least bind gestures to actions within Windows would be appreciated. 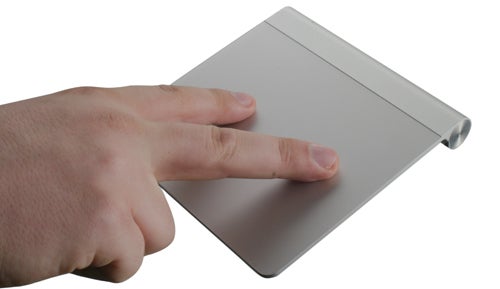 While the default multi-touch functionality is everything you’d expect, the real magic actually comes with third-party programs – BetterTouchTool is a prime candidate – that let you assign your own multi-touch gestures. The Magic Trackpad has no problem registering as many digits as a normal person could plausibly apply to it, so there’s no reason to limit yourself.


We wouldn’t go so far as to suggest that the Magic Trackpad is a completely viable replacement for a mouse, but if you use your Mac in a manner that fits with the device’s limitations it’s an interesting alternative. For general desktop use, such as browsing he web, accessing emails and editing pictures in iPhoto or even Aperture we found that the Magic Trackpad really did make things easier after we adjusted to the new input.


There’s a much more natural correlation between the action of moving a finger across a touch-sensitive and a mouse pointer moving across a screen. And, while it’s of course possible to make fine adjustments with your fingers when using a mouse, most movements are made from the shoulder and elbow which are both far less dexterous than your digits.


Apple’s Apple Magic Trackpad is pretty expensive for an unnecessary peripheral, but it works as advertised and can even make general desktop activity a little easier than a mouse at times. We’ve a long way to go yet before we’ll be persuaded to part with our mice, but this is certainly an interesting step in the right direction.