Among all the fancy high-end gear we review from Logitech, such as the G13, which not only had backlighting but its own LCD screen, or the wireless Wave Pro Desktop, it’s easy to overlook the peripherals that simply do their job while not costing the earth. One of these is the company’s new LS1 Laser Mouse. 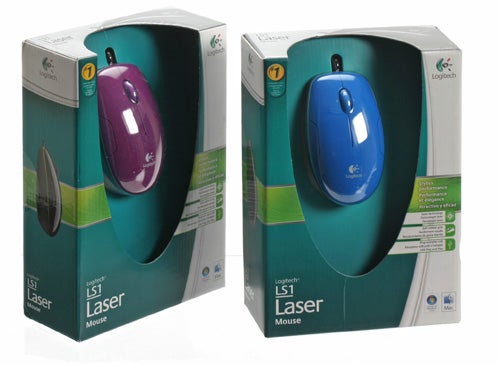 As its title suggests, the LS1 is based on a laser sensor, but that’s probably the most exciting hardware specification it can lay claim to – the main selling point being the range of glossy bright colours and shades. With ever more desktops, notebooks and especially netbooks becoming available in various hues, this will undoubtedly appeal to those who wish to match their peripherals to their hardware.


Not that the whole rodent is coloured: no matter which finish you choose it will always have a rubberised black lower half and white base. In its black incarnations, the LS1 comes with a red or green strip dividing the glossy and rubberized sections, while the white version is stuck with a green strip. Other colours (cherry red, pink, purple, blue and lime green) are all separated by a white strip. 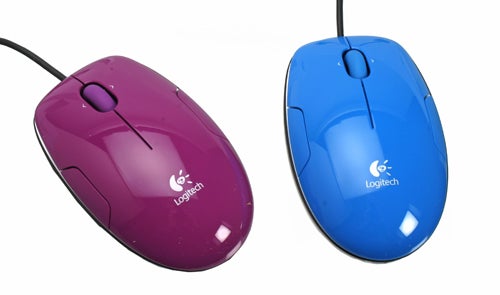 We received the blue and purple versions. The top half’s glossy finish is attractive in a cute kind of way – we can definitely see the pink and purple LS1s appealing to the fairer sex. It must also be said that despite the high-gloss finish, fingerprints and grease are barely visible – at least on the two colours we received.


But enough about the aesthetics, what’s Logitech’s most colourful rodent actually like to use? It’s important to keep in mind that the LS1 is as basic as it gets: all we have here is a three-button mouse with four-way scroll wheel. There are no ergonomic curves or unique finger rests on this symmetrical mouse, which does give it the advantage of being perfectly ambidextrous. 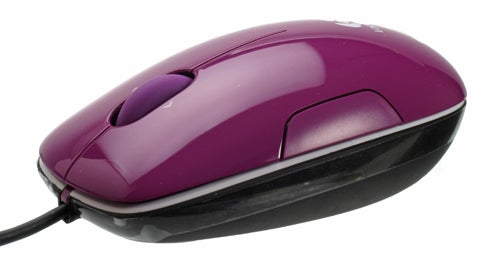 There’s also no sign of Logitech’s micro-gear ‘freewheel’ scrolling, which is a shame though hardly surprising given the budget nature of the LS1. Instead you get a rubberised and well-positioned scroll wheel that, despite its slightly notched feedback, is a little inaccurate and therefore unpleasant to use.

Ergonomically the LS1’s shape is reasonably comfortable, though it can’t match the moulded contours of dedicated right-handers like Logitech’s G9 or MX Revolution – admittedly far more expensive mice. Its rubberized lower section does provide a kind of thumb-rest, but we wish Logitech would have extended the rubber to the small cut-out matte sections on both sides of the LS1. Still, as long as you’re not using a wrist-rest mouse pad, this Logitech provides a secure grip.

Three small Teflon feet ensure the LS1 slides along smoothly enough and its laser sensor is never less than accurate. Unfortunately, its button action is not as nice an experience. Though the buttons give a defined click when fully depressed, the LS1’s left and right buttons feel just a tad mushy. Also, if you press the left one just after right-clicking it feels like the left button snags a little, which can be disconcerting.


Logitech’s SetPoint software is as good as ever, with some intelligent default choices. Clicking the scroll wheel, for example, brings up a zoom pointer, which lets you use the wheel as a zoom control. As ever, if this doesn’t suit you the scroll wheel is fully configurable, meaning you could make the LS1 a five-button mouse with two-way scrolling. 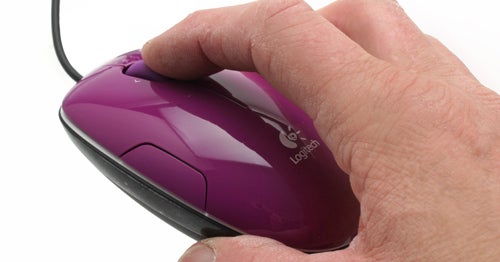 Overall, the LS1 is by no means unusable, but it isn’t a patch on other Logitech mice. On the other hand, with an MSRP of £19.99 it’s also one of the cheapest and it’s still a step above most bundled mice. However, for the £14.99 it demands online you can easily get better mice from Microsoft (like its ergonomic Wireless Laser Mouse 5000 for only £2 more) and even Logitech itself, leaving the large range of colours as the only reason to purchase the LS1 over similarly-priced alternatives. 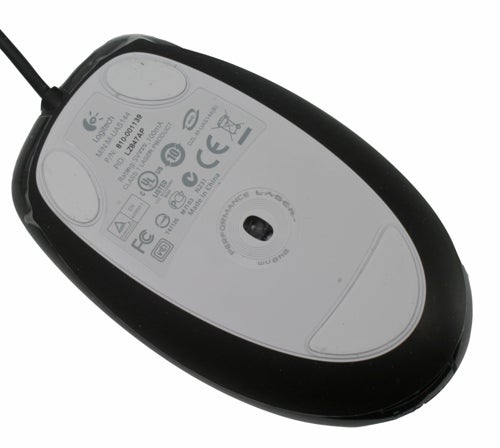 
Logitech’s LS1 is as basic as it gets and while a step above most bundled mice, it’s not particularly comfortable to use either. Basically there are better mice available for the price, though if you must have a mouse to match your pink/blue/white or other hue of netbook there are few alternatives.