The iMac has always been a thing of beauty; a shining beacon of what’s possible when both form and function are allowed to combine in harmony. We’ve come some way since the G3 design, too, with its translucent plastic case and its shape that was, while attractive, unavoidably dictated by the necessity of finding space for a cathode ray tube display.


The latest generation iMac is still designed with the display as its focus, but thanks to LCD panel technology the overall form is much more understated. On this 27in model the screen utterly dominates the front of the system. The front surface is covered in a single piece of glass, which sits flush with the aluminium strip at the bottom. And because of its size the iMac dominates any surface it’s placed on. Subtle it is not. Stylish and attractive it undeniably is.


The front is habitually clear of any inputs or controls, with the power button reached around the back on the left, the expected DVD drive found on the right edge with an SD card reader below it, and the rest of the iMac’s ports around the back to the right, as you face the system. These comprise four USB ports, a FireWire 800 port, 3.5mm audio input and output jacks, an Ethernet port and a mini DisplayPort connector. On this 27in model the video port will work as both an output and an input, but it’s worth noting that on the 21.5in model it’s only an output.

Incredibly, despite its massive size, the hinging on the 27in iMac is still engineered such that a single finger is all that’s required to adjust the level of tilt. It’s not something you’ll likely notice often, if at all, but it’s just one sign of the build quality Apple ascribes its products. Not that for £1,349 anything less would be acceptable. The metal section at the front is also narrower than ever now and as a result looks less out of proportion and, well, just plain better. Really all Apple needs to do now is make the iMac’s stand height adjustable, or better still provide a VESA mount, and it might just have perfected the design.


While its 27in display does share a diagonal measurement with monitors such as the Dell 2707WFP, the iMac doesn’t share the same pixel count. Rather, the 27in iMac has a massive 2,560 x 1,440 pixel resolution, which you might notice is a 16:9 aspect ratio, rather than the 16:10 ratio sported by most dedicated monitors (for now, at least). In effect all Apple has done is cut 160 vertical lines of pixels off a 30in panel.

At first I wasn’t entirely sold on the narrower aspect ratio, but any doubts are hard to hold on to upon using the iMac. The amount of desktop real estate was still sufficient to illicit a squeal of joy the first time I turned on the system and stacked three Safari windows side by side; just because I could! Alternatively you could fit two Pages or Word documents side by side, at 100 per cent magnification, with room to spare, whereas the benefit of more pixels for image and video editing applications should be self-evident.

Better still the entire iMac range now uses LED-backlit IPS LCD panels. We’ve espoused the numerous benefits of both technologies before, notably improved accuracy and vividness of colours, as well as a lack of any warm up time worth speaking of (so your colours are accurate as soon as you turn on the display).


The results speak for themselves; the iMac’s display looks nothing short of excellent. It’s not HP DreamColor LP2480zx levels of breathtakingly accurate reproduction, but you’d be utterly insane to expect such prowess considering that monitor is about twice the price of an iMac. There is one major criticism, however, in the substantial amount of light bleed, especially at the lower corners, though it is less obvious as you move farther back from the screen. Less universally detrimental is the glossy finish, which some will love and others will despise. 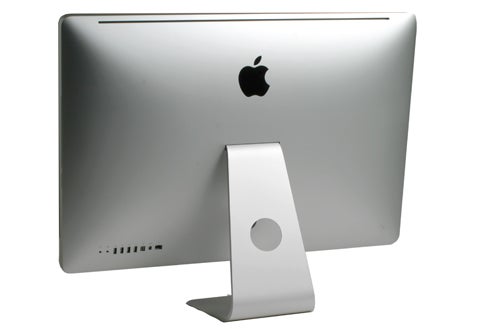 One small quirk of the iMac’s design is that there’s a small but noticeable gap, of maybe 5mm, between the panel itself and the glass surface of the display area resulting in smudges appearing very pronounced against the display. As such you’ll want to keep it away from anyone or thing likely to prod it all that often. Having seen the state of Riyad’s television, for example, I can only imagine how keen his cats would be to get their paws on a shiny new iMac.


Interestingly this means that unless Apple updates its 30in Cinema HD Display, the 27in iMac might actually be a better choice for those in need of quality image reproduction. While the iMac sacrifices 160 lines of vertical pixels over the dedicated monitor, it uses a superior backlight technology, and though it’s £200 or so more expensive, it doesn’t require a separate Mac or PC to connect to it.

The components inside the iMac are hardly lightweight in this generation. Even the entry-level 21.5in model gets the same 3.06GHz Core 2 Duo processor and 4GB of RAM featured in the standard 27in system, although the graphics chip improves from the integrated nVidia GeForce 9400m in the entry-level system to a dedicated ATI Radeon HD 4670 in the step-up 21.5in and entry 27in iMac. 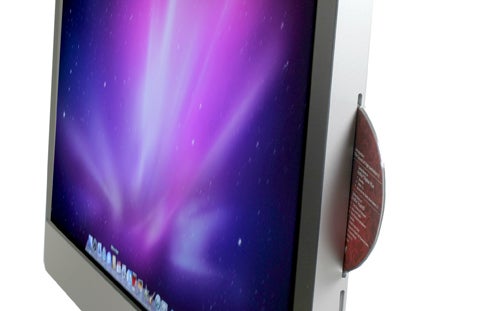 The real show stopper, however, is the top-end 27in iMac, which comes with a 2.66GHz Core i5 CPU and ATI Radeon HD 4850 graphics. If a mere quad-core CPU isn’t good enough, you could even step up to a 2.8GHz Core i7 processor, which adds hyper threading to the mix although it will cost you £160 to do so. The other upgrade you might consider – moving to 8GB of RAM – is at least cheaper now as the new iMac has four slots (up from two) so you don’t have to pay Apple’s crazy 4GB DIMM prices.


Thanks to these new processor options, the hardware inside the iMac should no longer be a deterrent to those looking for a desktop system for image or video editing. Even if you are doing computationally intensive enough work to stress a Core i7 CPU, the use of a half-decent graphics chip means there’s always the option of having OpenCL-based GPU-acceleration offload some of that pressure – just so long as the software you’re using supports it.


Such spec boosts shouldn’t be necessary for the overwhelming majority, however. The system I’ve been using, which ‘only’ has a Core 2 Duo CPU, doesn’t exactly feel sluggish. Snow Leopard’s speed enhancements make this system even more of a joy to use than the 24in iMac we looked at earlier this year, especially considering this system offers more than 60 per cent more desktop real estate for less than 13 per cent more money than its predecessor. It’s certainly better value than a similarly-priced 2002 Chateau Haut Brion at any rate.


The package is better this time, too. A wireless keyboard and mouse are now included in the price, whereas before you’d have to pay to upgrade from the wired versions. Even more crucially, the mouse is petty special, being the Mighty Mouse’s successor, the aptly named Magic Mouse. 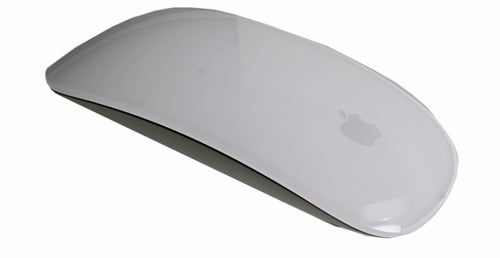 In true Apple style, the Magic Mouse is a statement in minimalistic design. Gone are buttons and scroll wheels, replaced with a single, multi-touch sensing surface, in effect acting as one giant button. Not only does it look fantastic, it’s also very comfortable to use after a few minutes adjustment to the idea of having no specific points to press on. And the shape makes it no less easy to use for left- or right-handers.


As you’d expect, left and right clicks are differentiated by which side of the mouse is clicked, and scrolling is simply a matter of moving a finger over the surface of the mouse but with the added bonus of there being no axis so, if a program supports it, you can scroll in absolutely any direction you like.


Those are all single finger actions, so what about multi-touch? Easy, swipe two fingers on the Magic Mouse to skip forwards or backwards in any program with those functions, be that Safari, Keynote, iPhoto or any other. At first I wasn’t sure how much I liked the action – I kept on moving the mouse in the process – but after 20 minutes or so it became natural and I’m now loathe to go back to a ‘normal’ mouse. Best of all, there’s absolutely nothing stopping Apple from adding more gestures (I outright begged two of Apple’s product managers for pinch-to-zoom) in the future.

I’m still not sure I’m particularly keen on the keyboard Apple supplies, whether with or without a numpad as it looks a lot better than it is to type on for extended periods. It can’t be that bad, thought, given I’ve managed to complete this review without hurling it at the iMac in frustration. At the very least the use of Bluetooth is to be praised; you wouldn’t want horrible cables trailing across your desk to your iMac, would you?

Perhaps the most incredible thing about the 27in iMac is that it quite literally has no rivals. The 21.5in system competes (very favourably I might add) with the likes of HP’s TouchSmart IQ500, but no other manufacturer is currently manufacturing an all-in-one PC with specs anything like the 27in iMac. And it’s not like building an equivalent system separately is particularly viable, either.


Obviously to match resolutions as closely as possible you’ll need a 30in monitor and I wish you good luck finding one of those for much under £900, even accepting the inescapable lack of LED-backlighting thereof. That leaves the best part of £460 to spend on the system itself, which won’t even get you an entry-level Mac mini. Broadening the remit to allow Windows-based PCs won’t help much. Yes, £460 would buy you a Dell Zino HD, but not one with components to match an iMac. If we sacrifice compactness and attractiveness then the likes of a Medion Akoya P36888 might just make the running but I, for one, would never settle for such compromise. 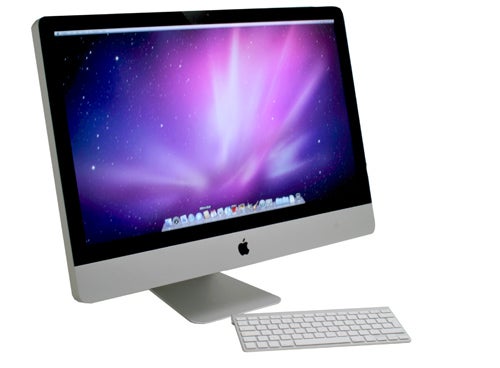 £1,349 is a lot of money to spend on a desktop computer; there is no denying that. Break it down, though, and it becomes clear why the 27in iMac is such a brilliant proposition. Not only is it the best looking all-in-one system by a long shot, it also offers the most powerful components and better still it does so while proving surprisingly excellent value for money. It’s not the right Mac for everyone, but by Jove it’s the Mac everyone will want.


The 27in iMac may not be flawless, but it is peerless. The few improvements that could be made don’t detract from the fact that this is quite simply the best iMac, and possibly even the best Mac, Apple has ever made.

Hugo Jobling
Hugo Jobling contributed a variety of reviews to Trusted Reviews between 2007 and 2011. …