What is the Roku Streaming Stick Plus?

A streaming device can be, and should be, a little bundle of media-bingeing joy.

The trick is doing it correctly, because when you get into the 4K and HDR market, it’s tough balancing features with price. The Google Chromecast Ultra goes for the essentials-only approach and ends up too basic. The Apple TV 4K goes for the premium angle, but it’s too expensive for what it offers. The new 4K Amazon Fire TV has a good balance, but it does nudge you towards Amazon’s paid ecosystem.

Enter Roku, a company that specialises in streaming and is responsible for Sky’s Now TV box. The brand doesn’t have much of a presence in the UK, but it’s massive in the US, and with good reason: Roku has by far the best interface on any streaming device.

That’s the Roku Streaming Stick Plus’ biggest selling point, but versatile hardware and an excellent mobile app help to make it the best streaming device you can buy for 4K and HDR. 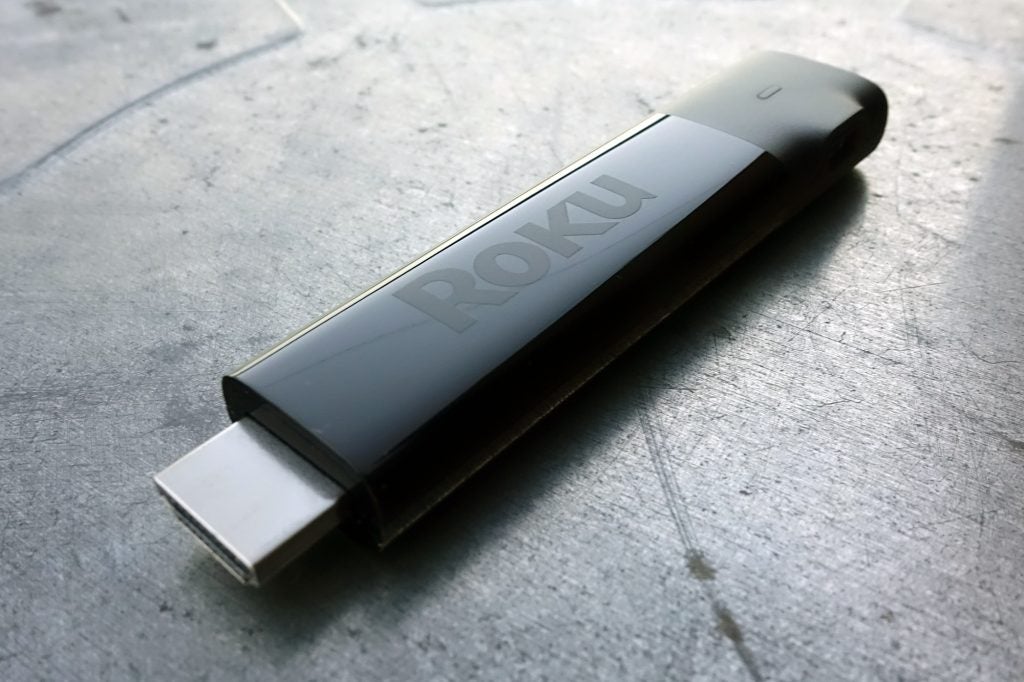 You can’t fault Roku for telling it like it is. This thing is a stick, and it streams. There’s not much more to it, really. The ‘Plus’ differentiates it from the older, non-4K, non-HDR iteration of Roku Streaming Stick.

At one end is an HDMI plug, designed to go straight into the back of your TV, projector or AV amp. The only other connection is the power input. Unlike pretty much every other such device, the Roku Streaming Stick Plus draws power from a mini USB, not micro USB, connection.

Any old mini USB cable should work, but Roku suggests using the supplied one, which houses a wireless amplifier. That’s to help with Wi-Fi signal strength and range (typically an issue with streaming devices tucked away behind TVs and games consoles). There’s no room for an ethernet socket – it’s 802.11ac MIMO dual-band Wi-Fi or nothing. 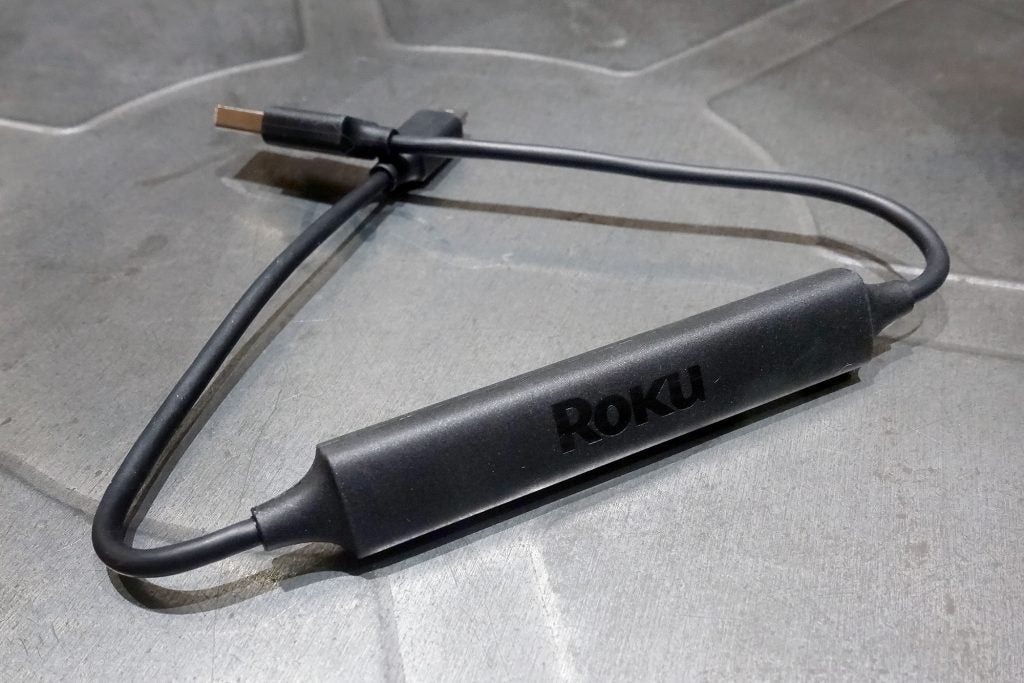 You get an USB extension cable and dedicated mains block in the box, just in case your TV is unable to power the stick. I wish Roku had included some sort of bendy HDMI extension, because the stick format won’t play nicely with more cramped set ups or wall-mounted TVs.

Update: Roku has informed me that you can ask for a free HDMI adapter from the official website. That’s still a bit of a faff, but it’s better than making you buy one.

There is a remote control. Roku was not tempted to reply on a mobile phone remote app, which is good, because that approach didn’t work out so well for Google. It’s a good remote too: small and comfy to hold, but not so small that you’ll keep losing it.

Besides the basic navigation keys, there are shortcuts to key apps. Well, Netflix and three other very random choices: Red Bull TV, Rakuten TV and Yupp TV. No, me neither… Amazon Video and YouTube would have made a lot more sense to me.

There are also power and volume buttons, designed to work directly with your TV, so you don’t need to use two remotes all the time. Roku says they should work with any TV with an HDMI socket – the stick analyses any TV it’s plugged into and tells the remote what infrared commands trigger the power and volume controls. 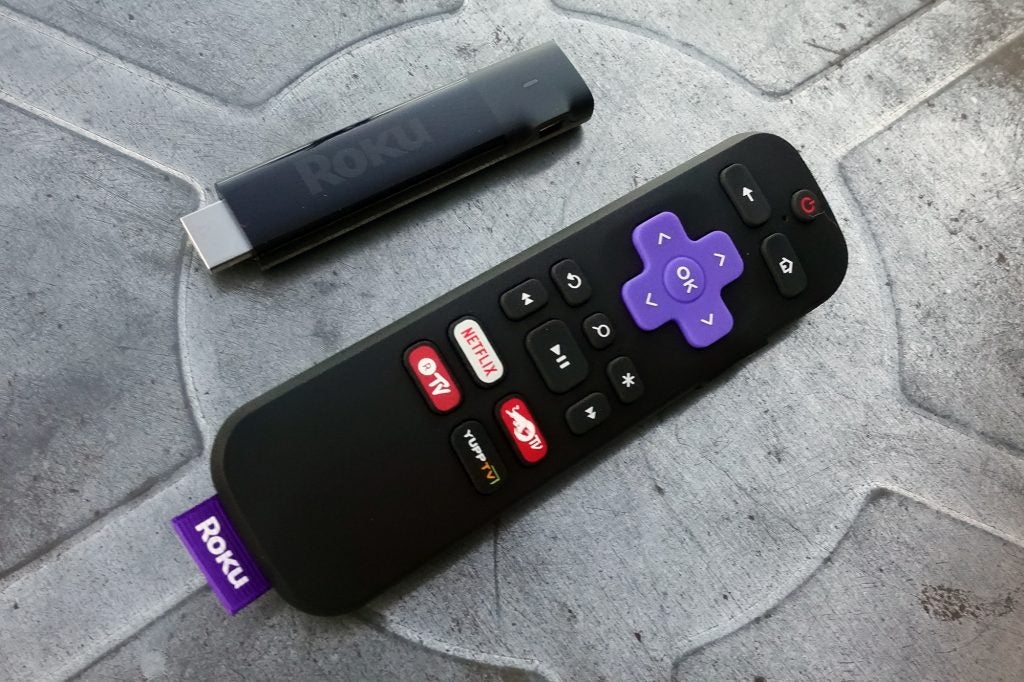 One thing missing from the remote is a headphone jack. Previous generations had a ‘Private Listening’ mode, which streamed the Roku’s audio into the remote, so you could use headphones if you didn’t want to wake the house up. You can still do that, but you have to use the Roku mobile app and plug headphones into your smartphone or tablet. Don’t worry about latency – there isn’t any noticeable lag.

I would recommend downloading the app even if you have no intention of using headphones, because it’s actually very useful. It’s almost as responsive as the physical remote, and you can bring up a full keyboard for typing in email addresses or passwords.

The latest update, which works on both the remote and the remote app, is the addition of the Enhanced Voice Search feature. So now you can spend less time typing and more time watching. This brings Roku in like with the Amazon Fire Stick and Amazon Fire TV, both of which have the a voice remote. 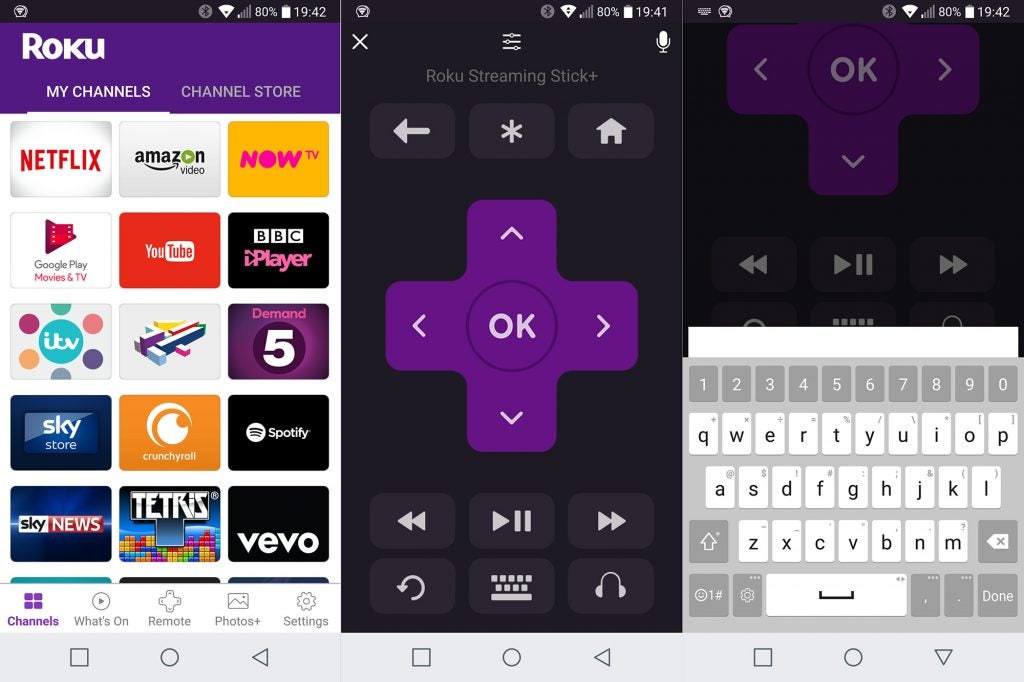 The Roku Streaming Stick Plus’ biggest and most important feature is its open ecosystem and generous support for apps, or ‘channels’ as Roku calls them. All the biggest names in video streaming are here.

You also get plenty of lesser-known apps that nonetheless command a loyal following, such as Crunchyroll (for anime), Mubi (arthouse movies), and Shudder (horror). Check out our list of the best streaming services for some niche alternatives to Netflix.

There are thousands more channels, but some of them are incredibly niche. A quick flick through the Channel Store brought up such classics as The Truck Channel, The Relaxing Channel for Dogs, and another one that just shows you goats. Hey, I’m not here to judge.

Out of all these, only Netflix, Amazon Video and YouTube display Ultra HD 4K (2160p at 60fps) and high dynamic range. HDR support comes in the shape of HDR10, the most common open format. There is no support for Dolby Vision, the rival format that uses dynamic metadata to optimise the picture scene by scene. It’s a little disappointing, but hardly a dealbreaker – at least in the UK, there is no app that streams in HDR without HDR10. 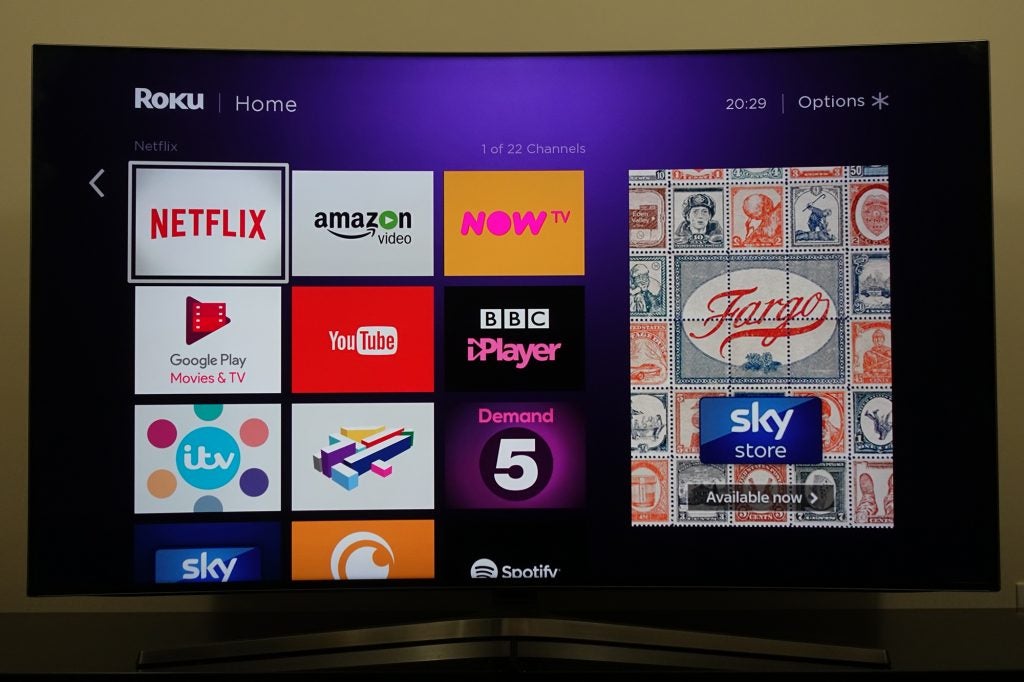 While I’ll only ever use a fraction of the available channels, I wholeheartedly endorse Roku’s platform-agnostic approach. Nobody is excluded, which is something the other manufacturers could learn from. The Google Chromecast Ultra and Apple TV 4K currently don’t support Amazon Video, while the new Amazon Fire TV doesn’t have Now TV.

I also appreciate Roku’s clean menu system, which is easy to navigate at a glance and doesn’t demonstrate any favouritism. Nor does it try to sell you anything. The homepage is a uniform grid, populated entirely by your choices. The only things immediately in your face are the channels you’ve moved to the top yourself. By contrast, Apple, Amazon and Google all nudge you towards their respective storefronts.

There is a neat little feature called ‘My Feed’. This lets you bookmark (or ‘follow’) upcoming titles, so Roku will let you know once they’re available to stream.

You don’t get anything particularly fancy, such as Amazon Fire TV’s integration with the Alexa voice assistant, but at least Roku supports casting. I tried it with YouTube and Netflix and it worked flawlessly. 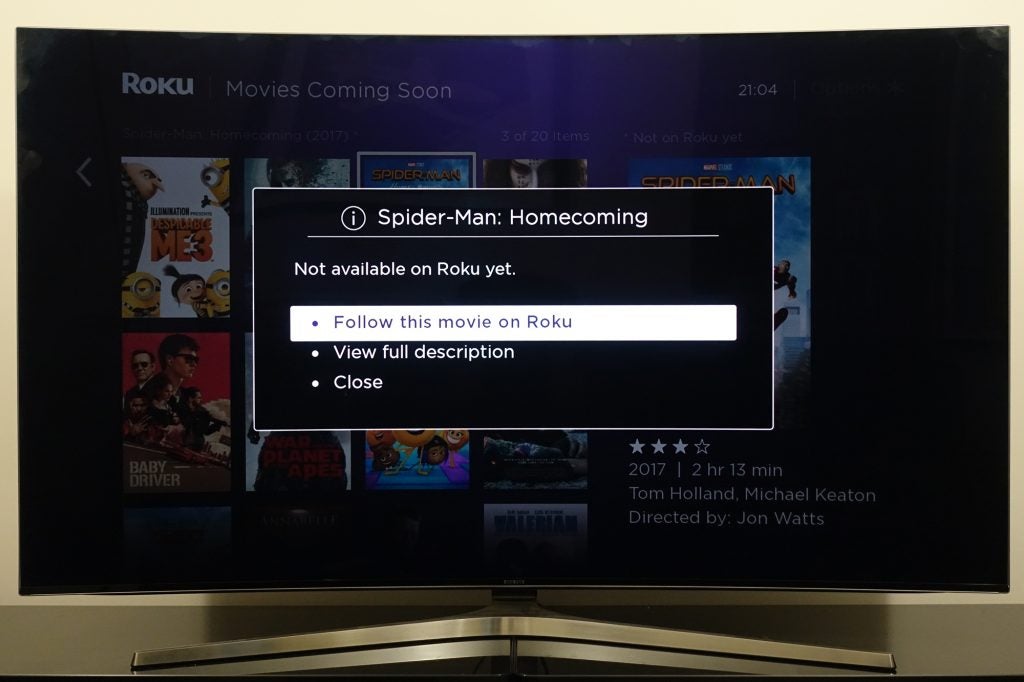 Picture performance is just as good as any I’ve seen being streamed natively on the best smart TVs. Ultra HD 4K pictures are pin sharp, and HDR images are suitably punchy. 1080p and standard dynamic range video is good too. The only time anything looks fuzzy is during the initial buffer, but that goes away quickly – more quickly than 2016’s top-end Samsung UE65KS9500 TV.

Speed is impressive in general. Apps are quick to load and button presses feel very responsive. I never noticed any lag, although for outright speed, the Amazon Fire TV is a little snappier.

It’s not just fast, it’s stable too. I’m not sure how much of that is down to the power cable’s built-in wireless amplifier. My ISP router’s signal is typically so dire that I sometimes struggle to maintain a stable signal in the next room, but with the Roku I didn’t once experience dropouts.

Setup was a breeze. The Roku Streaming Stick Plus seems entirely unfussy about what you plug your USB cable into. I was able to run it off one of my TV’s low-power USB ports, rated at 5V/0.5A. That’s a pleasant surprise and very impressive – the Google Chromecast Ultra and Amazon Fire TV both insist you use the supplied mains adaptor, which defeats the point of downsizing into dongles. 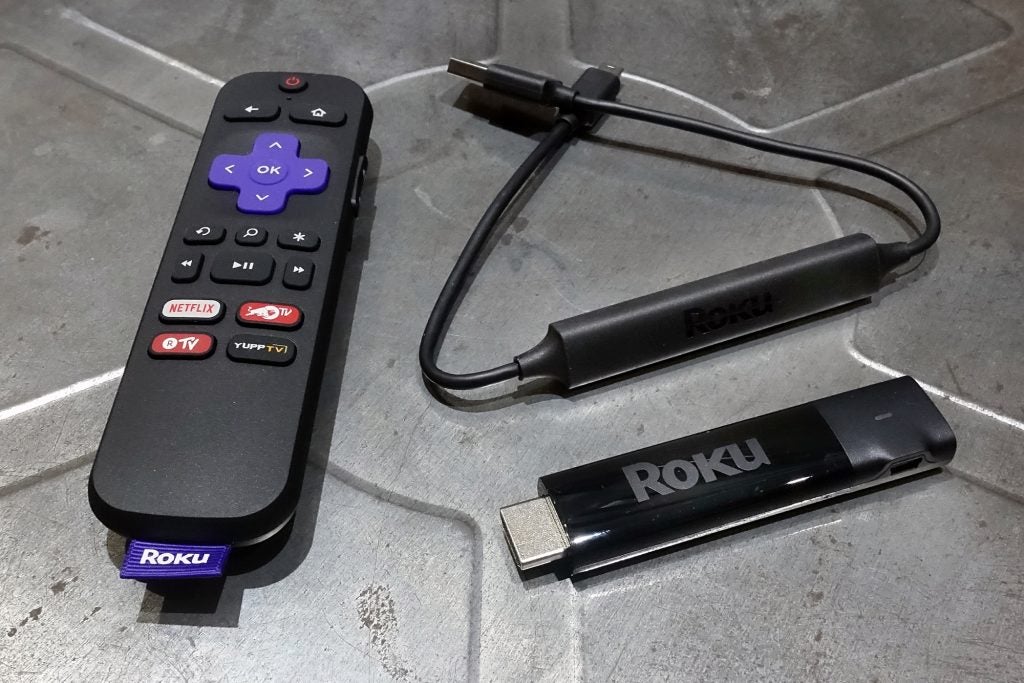 Why buy the Roku Streaming Stick Plus?

Why buy any streaming device at all? Because maybe your TV doesn’t have all the apps you want, or maybe your TV’s operating system is a pain to use. A good streaming device should bypass all that, giving you everything you want, with none of the hassle. That’s exactly what the Roku Streaming Stick Plus offers. Its app support and ease of use is unparalleled. It’s not oversimplified like the Google Chromecast Ultra, nor is it overpriced like the Apple TV 4K. If you just want a streamer that works, the Roku Streaming Stick Plus offers amazing value.

All the apps, none of the hassle.