What is the Google Chromecast Ultra?

Chromecast Ultra is 4K-toting version of the Chromecast.

The original came at the perfect time, when TV-based apps were still in their infancy, with TVs operating systems generally being a bit of a mess. The Chromecast let people cut through all that faff, choosing what they wanted to watch on their smartphones and then pinging it over to their TV.

That was definitely a good idea, so we got a second generation Chromecast – prettier, faster – and it had a sibling in the form of the Chromecast Audio. The Ultra is Google’s third attempt, designed to keep up with a world that’s demanding more pixels and colour. What you get it the same mobile-to-screen magic, but now with support for 4K and HDR video – at double the price.

The core functions remain the same, but the Chromecast Ultra messes with its predecessors’ delicate balance of convenience, function and price, and comes off worse for it. It’s still a good product, but it no longer feels necessary. That’s especially the case when we consider the latest releases from rivals, such as the new Amazon Fire TV 4K, or the Roku Streaming Stick Plus – both similarly priced but offering much more. Then there’s the Apple TV 4K. 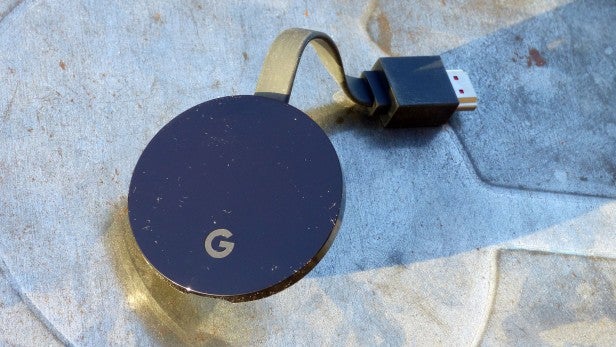 Google has been a bit obsessed with round things. The shortlived Google Nexus Player was essentially a stack of CDs, and the last-generation Chromecasts were basically Jaffa Cakes. The Chromecast Ultra sticks with that theme.

It’s covered in glossy black plastic, which scratches and gathers dust if you so much as glance at it. I wish everyone would stop using glossy black plastic, but at least the Chromecast Ultra is small and easy enough to hide. As with the other Chromecasts, the Ultra has a tiny HDMI cable that plugs directly into your TV or AV receiver – you don’t need to stare at another box under your TV.

For power, past Chromecasts could use any microUSB cable, which could take advantage of a spare USB socket on your TV, and be hidden entirely. The Ultra demands you to use its dedicated mains power adaptor if you want to watch 4K video, which is entirely the point of buying the device in the first place. 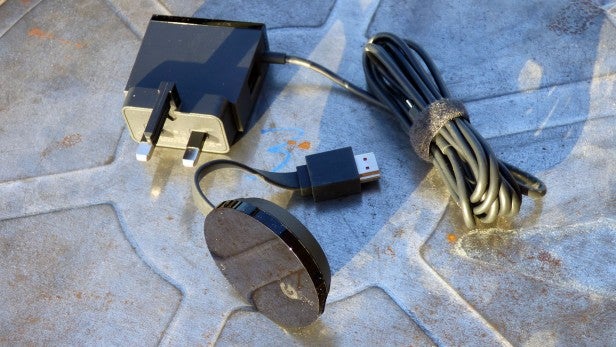 Use any other power source and the Chromecast Ultra will complain about the non-standard power supply, restricting you to 1080p. Google doesn’t explain why, but it makes sense that 4K would demand more power. The power supply also has an Ethernet socket, in case you want to get physical.

It’s the more stable way to get 4K, but it’s not exactly neat. You’d have a cable trailing from your router to the wall socket and power supply, and then the power cable trailing over to your TV – sort of undermining the compact and convenient form factor of the original Chromecast. If it helps, I’ve discovered the Ethernet works just fine with powerline adaptors, so you don’t need a direct line to the router. 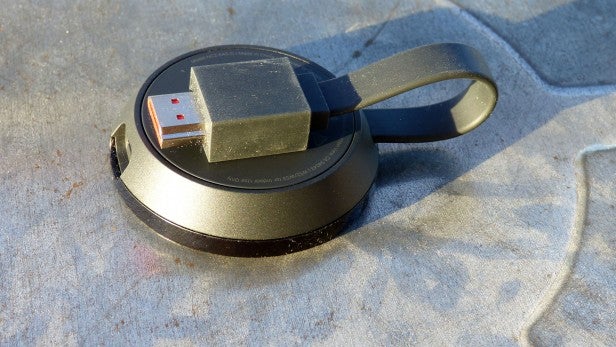 The headline feature and raison d’etre of the Chromecast Ultra is the ability to deliver video in 4K and HDR. That it certainly does, and you can find 4K HDR content on Netflix and YouTube  – mostly Netflix, because the stuff on YouTube is mostly nature scenes or dudes skateboarding in slow motion.

That’s it for 4K and HDR, because there is no native support for Amazon Video. Given the well-documented animosity between Google and Amazon (Amazon does not sell the Chromecast) I don’t imagine this will change any time soon. What else can you watch? BBC iPlayer, All 4 (formerly 4OD), Now TV and Crunchyroll. None of which offer 4K.

As always, you control the Chromecast with any smartphone or tablet. As long as you’re on the same network as the Chromecast, compatible apps will display a little ‘cast’ logo. Tap that, select your Chromecast, and off you go. 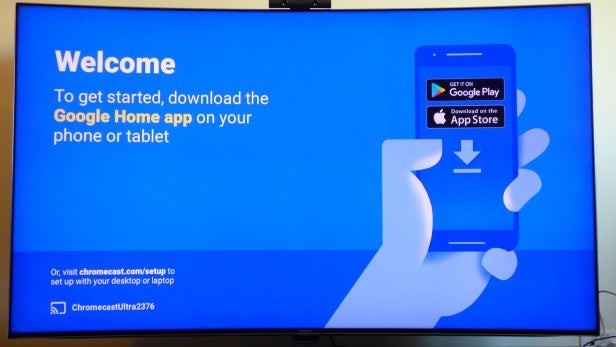 All control is through an app on your phone, as there is no remote control. That’s all good in theory, but sometimes all you want to do is to pause your TV show – and a physical button would be a lot quicker than having to wake up your phone.

The lack of a remote control was a lot more acceptable when the Chromecast was cheap, when casting was a new idea, and when nobody had a better alternative. It’s a lot less acceptable now, when the Chromecast Ultra costs £70, when certain TVs and rival streaming boxes can also stream – and they have remotes.

I tested the Chromecast Ultra with a Samsung UE65KS9500, which itself is cast-compatible. Guess what? Having a remote is great. 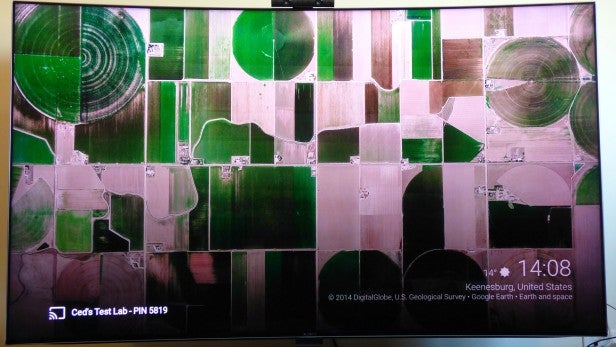 There is also no useful interface for the Chromecast’s services. Plug in the Ultra and you’re greeted by wallpapers, which are pretty, but it would be more useful to have some sort of menu.

Instead, you’ll have to hunt for video on your mobile app. Individual videos on Netflix do have a little ‘4K’ logo where appropriate, but unlike Netflix’s TV app, you don’t have the convenience of getting all 4K content herded into one easy-to-read menu. This is something for Netflix and YouTube to consider, but given the lack of 4K phones, it’s unlikely we’ll see 4K-tailored apps any time soon. 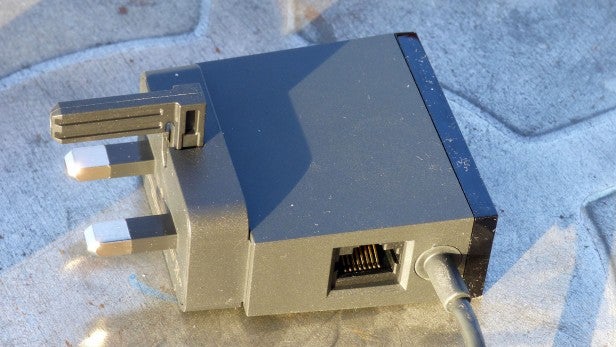 The Chromecast’s is very easy to set up. Just follow the on-screen prompts and you’ll be up and running in a minute. I’d definitely recommend using the dedicated power supply and an Ethernet cable if possible, as that’s the way to get the most out of the device.

If you don’t use the dedicated power supply, you’re restricted to 1080p. If you do, but you don’t use an Ethernet cable, loading time increases and it takes longer to ramp up to full 4K resolution. It’s definitely faster going hard-wired, but even then I didn’t notice any significant speed increase over my Samsung TV’s native apps.

Once you’re at full speed, you can’t tell that you’re using a Chromecast. I used Netflix to compare my TV’s native performance with that on the Chromecast, and the picture quality was virtually indistinguishable. Daredevil looks really good – detailed and dynamic. The video’s stability depends on your internet connection, though. Netflix says you’ll want speeds of at least 25mbps. 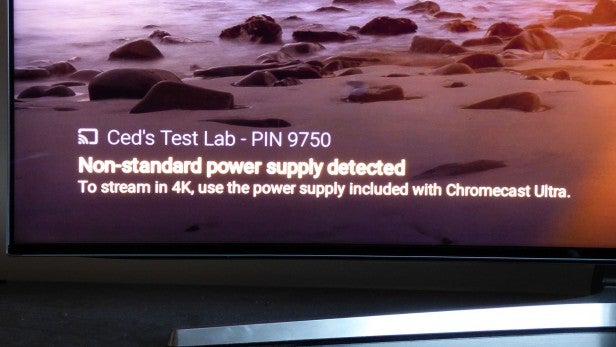 Should I buy the Chromecast Ultra?

The Chromecast Ultra does everything it sets out to do, and in that respect it is a success. It lets you cast video in 4K and HDR. It works. It’s stable. It’s easy to use. Mission accomplished.

But I’m having a hard time working out who the Chromecast Ultra is for, and why they might want one. If you want 4K and HDR video, and you have a compatible TV, then it’s likely that TV already has built-in apps.

A TV potentially offers more variety in apps, too – my reference Samsung TV offers me all three big sources of 4K and HDR available in the UK (Netflix, YouTube and Amazon Video) while the Chromecast only gives me two. As for performance, the Chromecast Ultra is no prettier, faster or more stable than my TV.

Some people do hate their TVs’ native app experience, and in that context a Chromecast Ultra makes perfect sense. But the Chromecast’s original appeal is dramatically diminished with the Ultra – it’s twice the price, and less convenient now that you must use the dedicated power supply.

There is only one group of people for whom I reckon the Chromecast Ultra makes sense: owners of 4K HDR projectors. Those projectors cost thousands – so their owners are not likely to baulk at the £70 price tag. Projectors also don’t tend to have built in smart ecosystems, so the apps offered by the Chromecast won’t be redundant.

Still, I doubt Google was aiming at the hardcore projector crowd, which is a rather niche market. The reality is that Google has made a device because it can, not because it should.

The latest Chromecast works a treat with 4K and HDR, but it’s a little pointless.