A solid pair of wireless headphones from AKG with good build quality, excellent comfort levels and a fine sound. The middling ANC performance is what keeps these headphones from challenging the likes of Sony and Microsoft in the mid-range area of the market.

The AKG Y600NC are the Austrian audio brand’s latest stab at the wireless headphone market, promising studio quality sound at a more affordable price than either the Bose NC 700 or Sony WH-1000XM4.

They carry AKG’s trademark looks and venerated sound but also have active noise cancellation, a feature AKG has previously offered in its N700NC M2 over-ears and N60 NC on-ears.

With AKG such an established and respected brand, how much of an impact can the Y600NC make in the crowded market?

While some cans have gone down the compact and svelte route, the AKG Y600NC are defiantly big.

They can fold up into a more compact form for packing away or placed into the carrying pouch that comes with them. The size of the earpads does aid the headphones’ noise-isolating design though, blocking out a fair amount of surrounding noise. 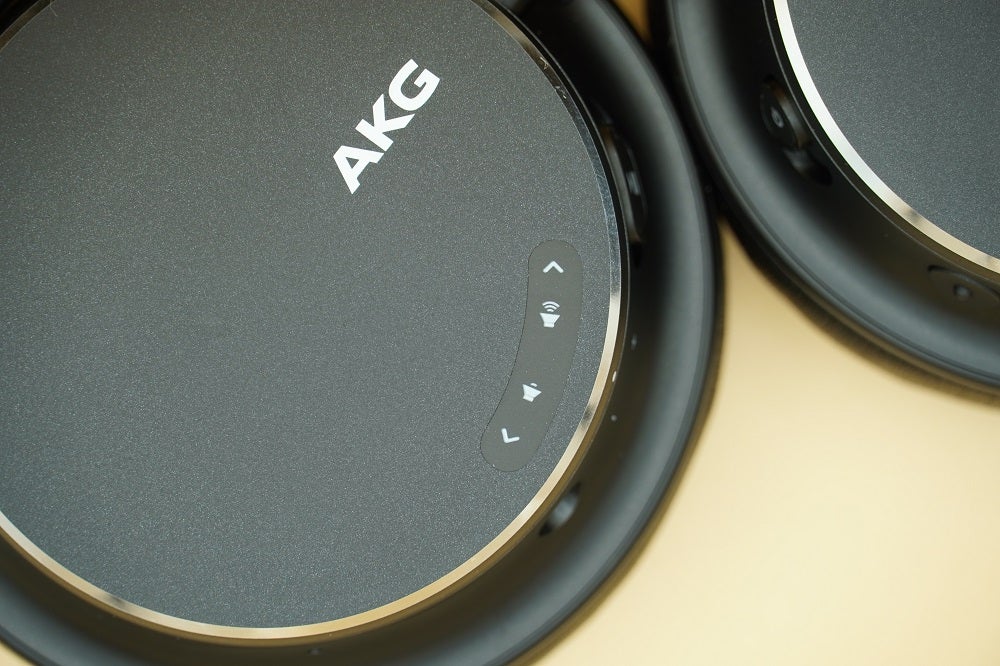 Another benefit of its size is comfort. The use of memory foam and protein-leather ear-cushions offers a secure, soft and padded feel against the head that means you can wear the Y600NC for extended periods without feeling a sense of discomfort.

Available in three colours – black and rather subdued silver and gold finishes – the headphones may not look spectacular, but they are distinctively AKG. The earcup’s silver trim highlights and wide headband that narrows in as it meets the earcup make the Y600NC a bit stylistically different from the norm.

The controls are on both earcups and split into buttons for power, transparency mode and playback, while volume shifting requires rotating the right earcup in a not too dissimilar fashion to the Microsoft Surface Headphones.

Though the controls work fine in practice they feel on the cheap side, slightly diluting the quality of the headphone’s overall design. A USB-C cable and 3.5mm are the other accessories packaged in the box.

Features — ANC performance is rather middling

Like most modern headphones, the AKG Y600NC features app integration in the AKG Headphones app. Downloadable on Android/iOS there’s the option of choosing between the two transparency modes (Ambient Aware and TalkThru), toggling on/off Auto Play/Pause and the headphones’ Auto-off feature. Auto-Play is very responsive, and even managed to restart a stream from Spotify even though the app was closed.

Other than checking battery life, updating firmware and setting up your own EQ settings (there are no custom presets included), there’s not much else of note. It’s simple, easy-to-use and will suffice unless you demand your companion apps more feature packed.

Wireless connectivity is Bluetooth 5.0 and there were a few blips every now and then. Nothing to suggest these headphones are approaching spotty territory, but every now and then the Y600NC would lose its fairly reliable grip for a few seconds.

Battery life is 25-hours with active noise cancellation on and 35-hours via wired means. That’s pretty respectable though down on the similarly priced Sony WH-H910N, which delivers 35-hours of Bluetooth with ANC on. Quick-charging is available with a 10-minute charge granting an extra four hours. 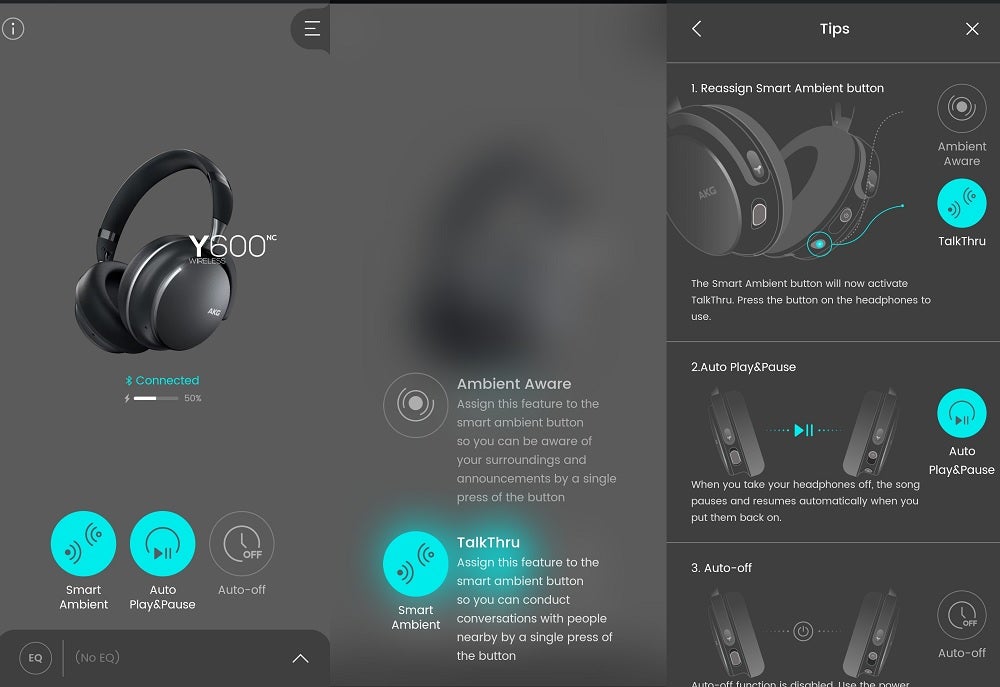 Both transparency modes work well enough, with Ambient Aware filtering through environmental sounds and TalkThru dropping the volume down and firing up the mics so you can speak to others. The headline feature is the presence of active noise cancellation and suffice to say results are merely ok. That you can’t turn ANC off somewhat hinders judgement of how effective it is, but even so it’s not particularly powerful in operation.

It drowns out low frequency sounds and manages to subdue some louder noises with the volume cranked up, but the ANC mostly struggles to suppress as sounds pierce your bubble of immersion more often than not. I could still hear people nattering as they went past and that can become distracting if you’re in a city full of distractions. The AKG Y600NC are a pair of headphones that a little too reliant on their passive noise-isolating design.

Of less question is the audio quality, which is detailed, on the warm side of neutrality and engaging. For a closed-backed pair of headphones, the AKG Y600NC produces an open, spacious presentation, that leaves you to pick out the placement of instruments and vocals in a mix with a decent sense of accuracy.

There are times when its open character doesn’t work in its favour. I noticed some old tracks were rendered sparse, not really cohering into a solid whole, but when the AKG gets into its groove it’s a fluid performer. And at least the ANC doesn’t negatively impact sound quality. 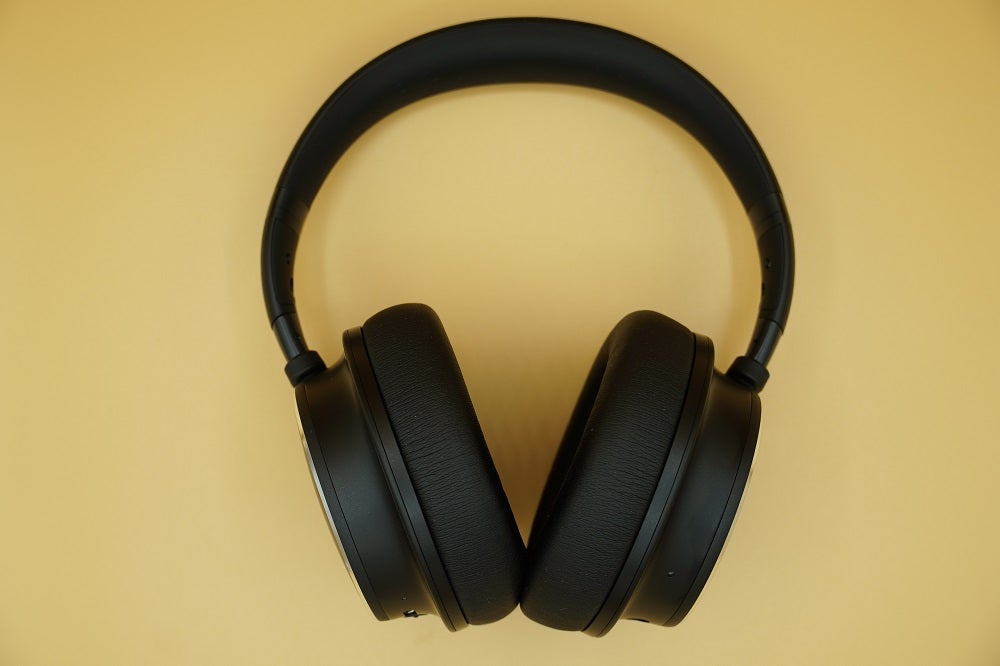 However, dynamically they can be rather flat. Holst’s Mars, The Bringer of War is not given the most dynamic of presentations, maintaining a rather one-note feel throughout its seven-minute runtime. It’s better with John Williams’ Leaving Home from the E.T. soundtrack, the headphones’ smooth tone expressing the highs and lows in a pleasant way.

The Y600NC’s laid back attitude seems more at home with slower tracks as it’s not the most attacking or punchiest sounding pair. They also don’t go as loud as you might want, taking a rather reserved approach in-keeping with their laissez-faire attitude. 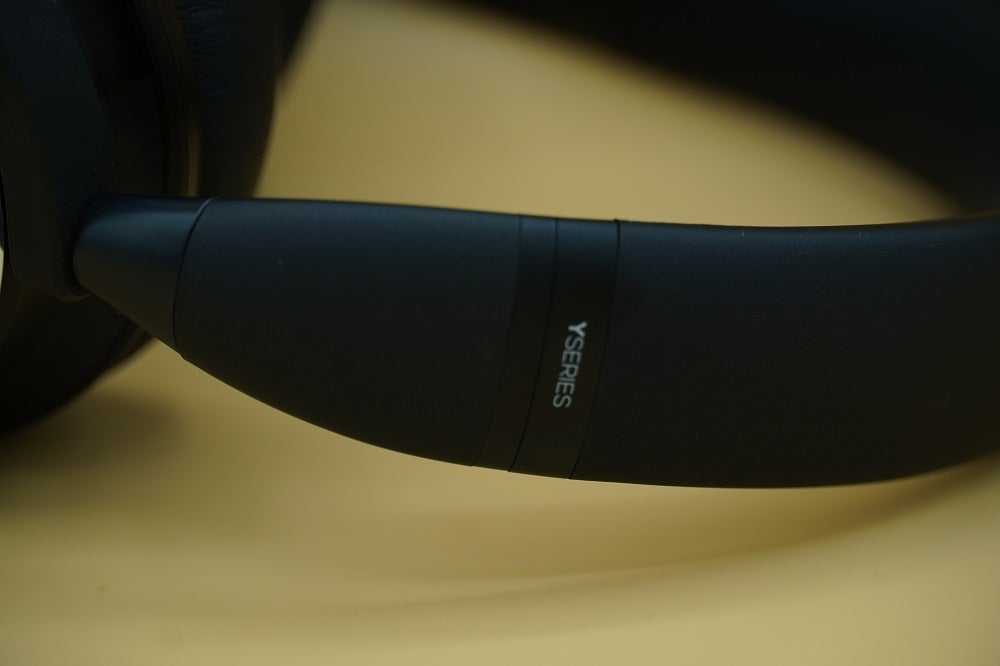 Low end frequencies are good, but they’re not the most impactful or have as much depth as some other headphones. You could say the same thing about reproduction of treble frequencies. Good, but other headphones, even at a similar price, ring a bit sharper.

With all that said, the Y600NC’s are enjoyable headphones to listen to. David Bowie’s Somebody Up There Likes Me is an entertaining and affable listen from start to end – in fact you’d be amiss to pinpoint anything that’s egregiously wrong with how they go about their business. There’s plenty of clarity, timing is robust and there’s a good amount of fine detail to chew on, but dig deeper and the Y600NC are just a good pair of headphones and not quite excellent.

The Y600NC are an enjoyable and engaging pair of wireless headphones, with a sound that’s smooth and laid back.

The AKGs are well-made, though the controls do feel a little cheap. They are, at least, comfortable to wear.

The Y600NC offer two versions to be aware of your surroundings or have conversations and they work well enough.

The ANC performance here is rather so-so, as the Y600NC are too reliant on their design/not strong enough to make a real dent with their ANC.

If a more energetic pair of headphones is what you’re after, the Sony WH-H910N are a pair to check out. The noise-cancelling performance is more adept, and they produce a more impactful performance and they’re not as massive looking.